The highlights this week: A look at where Mexican President Andrés Manuel López Obrador is steering the country on the eve of massive midterms, an iconic Brazilian architect remembered, and the far-beyond-soccer drama surrounding this year’s Copa América tournament.

The highlights this week: A look at where Mexican President Andrés Manuel López Obrador is steering the country on the eve of massive midterms, an iconic Brazilian architect remembered, and the far-beyond-soccer drama surrounding this year’s Copa América tournament.

In Mexico, more than 79 candidates and politicians have been killed during this year’s midterm election cycle, up at least 30 percent from the last midterms in 2015. The gruesome statistics underscore Mexican President Andrés Manuel López Obrador’s failure to make good on a key promise: to overhaul the country’s security policies to reduce violence. Insecurity was the top issue worrying Mexicans in an April poll by newspaper El Financiero.

On June 6, voters will decide whether López Obrador’s National Regeneration Movement (MORENA) party and its allies will continue to enjoy the two-thirds majority in Mexico’s lower house of congress. The supermajority has allowed the president to enact sweeping changes in the first half of his term. Polls indicate MORENA is still the most popular force in Mexican politics, and although its numbers may shrink slightly in the lower house, it is poised to pick up several governorships in local elections that will occur simultaneously.

While failing to make significant inroads on pledges related to security, poverty, and corruption since taking office in December 2018, López Obrador has invested hours each day in press conferences where he frames his tenure as a reclamation of power for the working-class everyman. Meanwhile, he’s increased state control over the economy and fought institutions that would check his power. The midterms will reveal how much Mexicans mind—and how much further López Obrador might go.

Promises and results. On security, a plan published early in López Obrador’s term outlined a shift toward harm reduction and away from militarization. Such a strategy could be effective if Mexican authorities crafted and enforced customized regional strategies for reducing violence, according to the International Crisis Group. Instead, López Obrador created a highly militarized National Guard—often deployed to block immigrants—and took an “it’s better not to talk about it” approach to cartel-related violence, Crisis Group’s Falko Ernst told the Los Angeles Times.

López Obrador emphasizes his devotion to the poor, but data compiled by political scientist Viridiana Ríos shows social spending was higher during several years of his predecessor’s administration than in his own. (A higher proportional amount of the current president’s spending has gone to the elderly.) His administration, however, did raise the minimum wage and enact new labor protections. On corruption, López Obrador’s government has pursued several high-profile probes but suggested dismantling the country’s freedom of information institute.

Communication power. Most Mexicans like what they see. In part thanks to marathon press conferences, many see the president “as kind of a heaven-sent hero who is carrying out a higher mission,” one more important than improving the economy or security, to “vindicate a victimized people who suffered at the abuse of the powerful,” said Luis Antonio Espino, a political communications analyst, in an interview with Letras Libres.

This discourse is effective in part due to unfavorable opinions of the previous Institutional Revolutionary Party (PRI) administration and the fact that the PRI and its newfound ally, the National Action Party, have yet to cultivate a compelling alternative for many voters. Ríos noted recently some young people who voted for López Obrador in 2018 have since been drawn to the small social-democratic Citizens’ Movement party. MORENA has especially lost support among young, educated women, according to pollster Alejandro Moreno.

In the international arena. Although a big election victory for MORENA would give the president a stronger mandate, he may continue his current path of scorning international oversight, environmental concerns, and open markets regardless. López Obrador has said U.S. funding to civil society watchdog organizations amounts to foreign intervention in domestic affairs. His electricity sector overhaul, which aims to restrict private companies’ participation, also relegates renewable energy to a secondary position.

Under both the Trump and Biden administrations in the United States, López Obrador has cooperated with Washington on repressing northbound migrants, and he appears open to cooperation on labor inquiries related to the U.S.-Mexico-Canada trade pact. Security cooperation, however, has broken down. Regarding Latin America, the Mexican president has at least rhetorically embraced the region more than his predecessor through co-founding the Puebla Group of left-leaning political leaders, but it has had few concrete accomplishments.

With a strong midterm showing, López Obrador may be on his way to not only continuing Mexico’s inward turn but also building up the kind of political machine that kept MORENA’s main rival, the PRI, in power for decades.

COVID-19-era Caribbean tourism. Struggling to adapt to unpredictable travel restrictions during the pandemic, some tourism-dependent Caribbean islands have experimented with strategies like a digital vaccine passport and remote work visas to look “beyond tourism.” The New York Times reported on the islands’ approaches and how their colonial histories subjected them to decisions in far-off countries.

A VC milestone. Kaszek Ventures’s São Paulo-based office announced it raised $1 billion across two funds to invest in Latin American start-ups. The $475 million early-stage capital pool is thought to be the largest fund of its kind ever raised in the region.

A Maoist massacre. A dissident faction of the Shining Path, Maoist guerrillas who terrorized Peru’s countryside in the 1980s and 1990s, killed 16 people in the country’s rural south on Saturday. These days, the group focuses more on drug trafficking than on revolution. Still, the killings could provide political fuel to presidential candidate Keiko Fujimori, who is trailing in the polls and whose father, former president Alberto Fujimori, waged brutal campaigns against the Shining Path during his tenure. 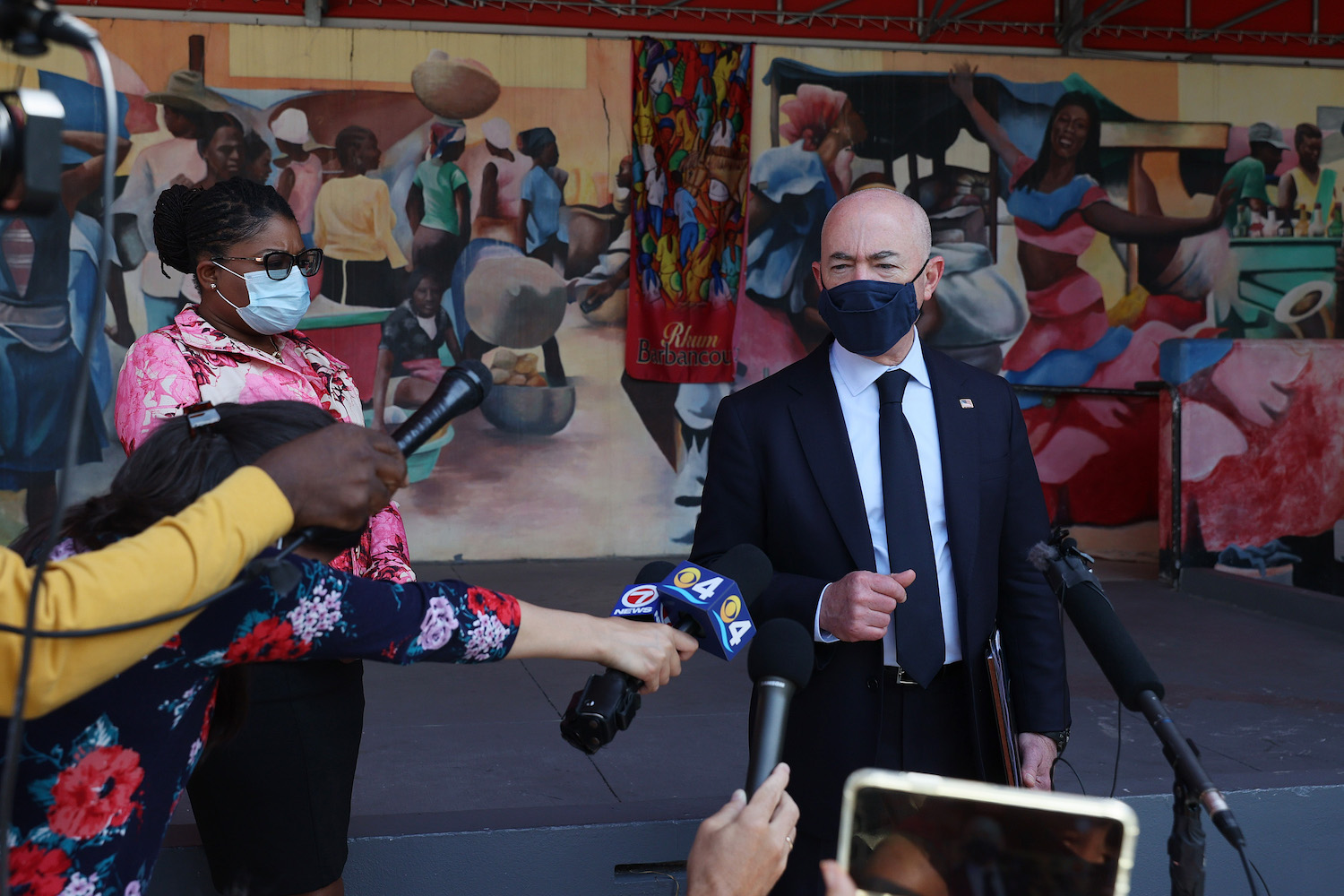 U.S. Secretary of Homeland Security Alejandro Mayorkas speaks to the media after meeting with Haitian community leaders on a new 18-month Temporary Protected Status designation for Haitians in Miami, Florida on May 25.Joe Raedle/Getty Images

A deportation shield. The United States announced that some 150,000 undocumented Haitians present in the country as of May 21 will receive permission to remain in the United States for 18 months due to social unrest and insecurity on the island. The United States has expelled more than 2,000 Haitians since U.S. President Joe Biden took office in January, according to immigration advocates.

An architecture icon. Pritzker prizewinning Brazilian architect Paulo Mendes da Rocha, a pioneer of modernism, died this week. He designed in the Paulista brutalist style, which relied on raw, angular, and concrete forms in contrast to the smoothly flowing shapes of the Rio School, characterized by Oscar Niemeyer. Much of his work is located in and around São Paulo, including the spaceship-like Paulistano Athletic Club sports arena, which made him famous in 1958 at the age of 29.

Costa Rica has become the 38th member of the Organisation of Economic Cooperation and Development, concluding an accession process that began in 2015. Three other Latin American nations are OECD members. Which of the following countries is not one of them?

The men’s Copa América tournament has pitted South America’s national soccer teams against one another—and against occasional guests like Mexico, the United States, and Qatar—since 1916.

Not for the first time, there is drama and uncertainty surrounding this year’s edition that is intertwined with political turbulence on the continent.

Repelled by tear gas, then COVID-19. As of this writing, organizers were still in the final stages of negotiation about the tournament’s location, which begins June 11. It was first slated to be co-hosted by Argentina and Colombia, but organizers pulled out of Colombia last week due to ongoing anti-government protests complete with road blockades and police clashes.

Holding the tournament entirely in Argentina is almost certainly plan B, but rather than quickly deciding on the change, organizers left the possibility of splitting matches between Argentina and Chile open for days, where fans could potentially attend the matches due to Chile’s higher vaccination rate and better control of the pandemic. In Argentina, a severe COVID-19 spike means stadiums would need to be empty, decreasing ticket sales.

Fujimorismo on the field. Several Peruvian national soccer team players have jumped on the wave of endorsements prior to the country’s June 6 presidential runoff by posting inexplicit but unmistakable messages of support for candidate Keiko Fujimori, echoing her call to “put on Peru’s jersey” and “vote for democracy and against communism” (referring to leftist candidate Pedro Castillo). This drew ire from some fans, but Peru’s soccer federation said the players are free to express their opinion.

Priority vaccines. Chinese biotech company Sinovac donated 50,000 doses of its vaccine to the South American Football Confederation to vaccinate teams that would play in the Copa América and other regional tournaments. But some countries, such as Argentina, have not yet approved the vaccine, and Brazilian authorities said if the shots entered national borders, they would be seized and distributed through the public health system. Some clubs have been vaccinating their players at away matches in Paraguay, a step the Brazilian national team is currently considering—but it would put players’ second doses (and their potential side effects) right in the middle of Copa América.

Although Latin Americans have slammed politicians who’ve received special access to shots in recent months, when it comes to soccer stars, the ethics appear a bit murkier in the public eye. One Brazilian club president said using the vaccine would be “inhumane” considering the shortage for the general population. Argentine star Lionel Messi, for his part, sent Sinovac three autographed Barcelona jerseys to thank them for the donation.

Uruguay is nearing the end of its own OECD accession process. Mexico became a member in 1994, Chile in 2010, and Colombia in 2020.