The costs of raising children, not government restraints, are stopping Chinese parents from having more.

The highlights this week: China introduces a three-child policy in hopes of increasing birthrates, why President Xi Jinping’s speech doesn’t indicate a shift in diplomatic tone, and Hong Kong authorities ban the Tiananmen Square anniversary vigil for the second year in a row.

The highlights this week: China introduces a three-child policy in hopes of increasing birthrates, why President Xi Jinping’s speech doesn’t indicate a shift in diplomatic tone, and Hong Kong authorities ban the Tiananmen Square anniversary vigil for the second year in a row.

On Monday, China announced that married couples would be allowed to have up to three children, raising the official two-child limit in a widely anticipated move. The one-child policy, in place for 36 years until 2016, left China with a demographic time bomb: declining birthrates and an aging population. Although Beijing officially recorded population growth in 2020, a Financial Times report suggests the original census figures showed a decline.

Despite government hopes, the introduction of the two-child policy in 2016 failed to produce a baby boom. It’s unlikely the latest policy change will affect China’s fertility rate, either.

The public has responded with mocking contempt toward the idea that government restraints have held parents back from having more children, rather than the exorbitant costs of child rearing in China—from migrant families forced to pay fees for local public schools to upper-class parents who fear their children will fall behind without flute or calligraphy lessons. Unless the government ensures the economic security of parents, the birthrate won’t move.

Nevertheless, many families will welcome the end to restrictions. Family planning policies have had terrible consequences, including forced abortions and sterilizations and children without a legal existence being cut off from public services. Before changes to the policy in the 2010s, parents who had two children lost jobs and faced harsh fines. But the two-child policy also ushered in a shift toward pregnancy discrimination and pressure for working mothers to quit their jobs. Unmarried mothers remain the target of official discrimination. China’s new natalist ambitions will likely result in new limitations on abortion, as well as other pressures on women.

So why keep a limit on the number of children a couple can have at all? One reason is to provide cover for the ongoing forced sterilization of the Uyghur minority in Xinjiang, whose birthrate fell by nearly 50 percent between 2017 and 2020. Another is that China now has an enormous family planning bureaucracy that supports many jobs. Party leaders may also be concerned that the rich flaunting large families—such as late Macao casino tycoon Stanley Ho, known for his four wives and 17 children—would spark resentment.

Xi rebrands Chinese diplomacy? Some Western commentators are reading a recent speech by President Xi Jinping as a pivot away from so-called wolf warrior diplomacy—the aggressive online stance by China’s representatives—toward a more conciliatory model. Top leadership has attempted to rein in diplomatic comments that invite blowback for some time. But Xi’s speech, largely a string of standard cliches about the “public opinion struggle,” doesn’t read to me as a change of tone but rather as a doubling down on keeping global discourse on Beijing’s terms.

Any attempt to soften China’s image may be undercut by the country’s own actions, such as its recent incursion into Malaysian airspace, which prompted an unusually strong response from Kuala Lumpur. The purpose of the maneuver, other than asserting Beijing’s sweeping South China Sea claims, is unclear. Malaysia has somewhat cooled on China since the 1MDB scandal and the 2018 elections, but the countries have no serious military or territorial disputes. Chinese maritime incursions have prompted neighboring Indonesia to triple the size of its submarine fleet.

Read a tight analysis of Xi’s speech from David Bandurski at the China Media Project.

Tiananmen vigil extinguished in Hong Kong. The authorities have effectively declared Hong Kong’s Tiananmen massacre commemorations, held every June 4 since 1990, illegal for the second year in a row. The move falls under the cover of pandemic laws against public gatherings, but the crackdown is clearly politically motivated. The city’s June 4th Museum has also been forced to close for a licensing investigation.

The annual protests were long a litmus test of Hong Kong’s continuing freedoms, as well as a thorn in Beijing’s side. Under the draconian national security law enacted a year ago, that era has come to an end.

Prominent foreign journalist kicked out. Peter Hessler, the most famous Western writer remaining in China, is leaving the country after his university employer refused to renew his contract. Hessler was unusually popular among young Chinese, especially aspiring writers, and his return to the country in 2019 to take up a teaching post was national news. But Hessler’s writing in the last two years was limited, and his biggest piece for the New Yorker—on China’s management of the coronavirus—faced criticism for being apolitical.

Weak job numbers. The month of May saw more layoffs than job gains in China, especially in the services sector. Despite a recovery from the initial impact of the pandemic, pervasive uncertainty still haunts the Chinese market. That mood has accelerated a long-standing trend: young people moving away from the private sector and toward the safe embrace of government jobs. While public service isn’t well paid, it comes with numerous benefits, as well as protections from layoffs and the frequent abuses of the private sector.

Yuan cooling. China’s central bank is trying to curb the yuan’s rise against the U.S. dollar through cooling measures, chiefly a hike in required reserves from 5 to 7 percent. The value of the yuan increased by 11 percent over the last year after hitting a 12-year low, and it was expected to climb further.

Beijing is cautious of an overly strong yuan, in part because it sees the depreciation of the dollar against the yen as part of the 1985 Plaza Accord as having undermined Tokyo’s growth. But rising commodity prices in the wake of the pandemic have prompted some economists to embrace the idea.

Cheaters never prosper? A fascinating interview by Motherboard reveals the extent of China’s industry in video game cheats. Since the gold mining rush in World of Warcraft began in 2005, China has been both a giant consumer of multiplayer online games and the chief producer of ways to cheat in them. Back in the 2000s, it was mostly Americans paying Chinese for these cheats, but today China’s domestic market has grown enough that hacks for games such as the popular PlayerUnknown’s Battlegrounds have become a multimillion-dollar industry.

It’s also a risky one: Prompted in part by the influence of gaming giants like Tencent, Chinese law treats the creators of cheats as hackers, and they risk severe jail sentences. 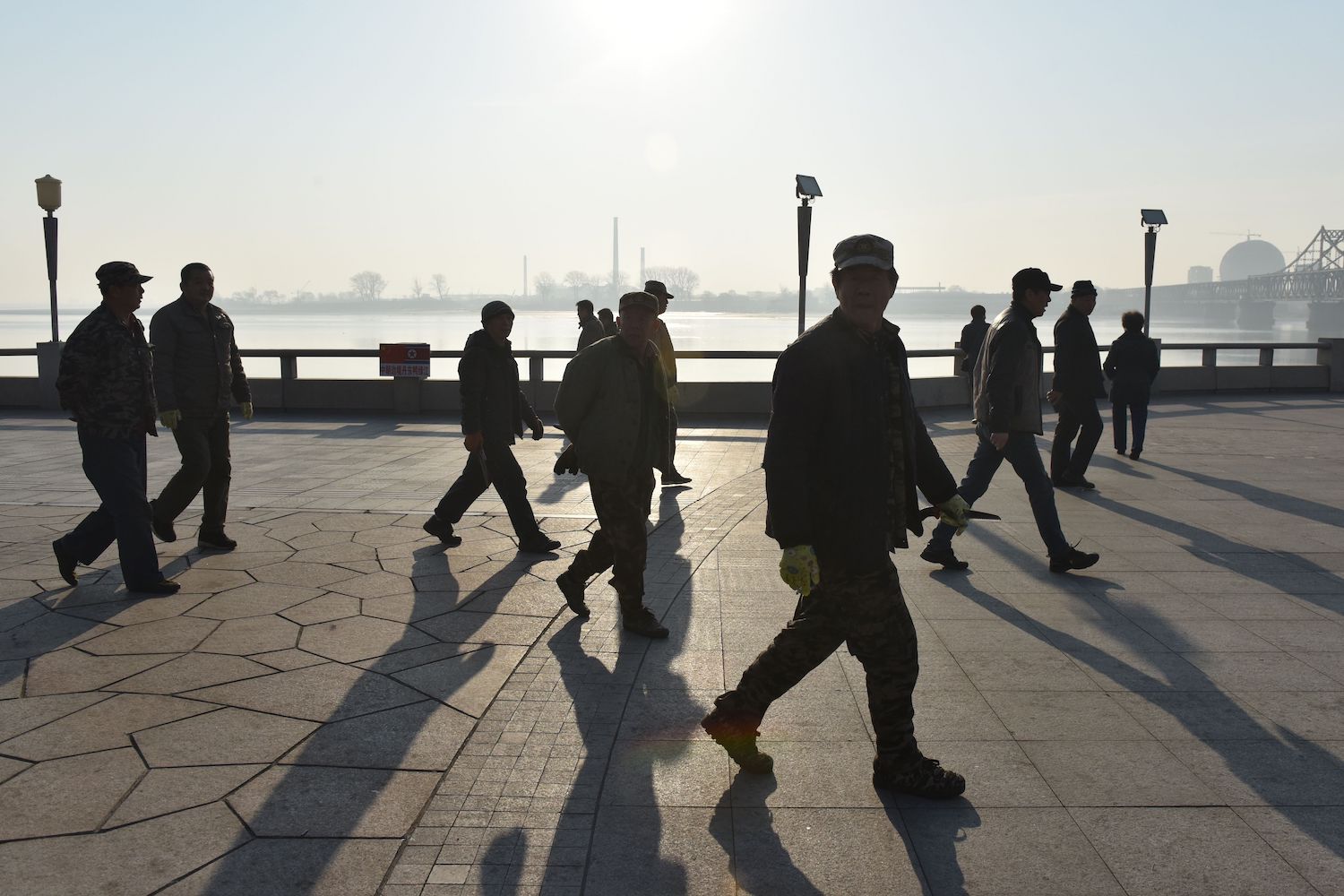 Workers walk on the waterfront in Dandong, China, with the North Korean city of Sinuiju in the background, on Feb. 23, 2019.GREG BAKER/AFP via Getty Images

Across the Yalu River, the residents of Dandong, in Liaoning province, get glimpses of a rare sight: ordinary life in North Korea. The Chinese city is just across the border from its North Korean counterpart, Sinuiju. Every day when the borders are open, busloads of curious Chinese head out on carefully monitored tours to see their poorer neighbor or take a ferry to peer with binoculars at North Korean farmers.

The exchanges run both ways. North Koreans cross the border constantly and mostly illegally, despite surveillance cameras and barbed wire. China regularly detains and returns North Koreans to an uncertain fate. Some make it to a new life in China or eventually to South Korea; others are there not to defect but to trade. A few elite, officially sanctioned tourists come to Dandong from across the river, but some of them are actually secret police, sent to track down their compatriots.

A Sino-Korean Friendship Bridge links the two cities, and the remnants of its Japanese predecessor, destroyed during the Korean War, are visible nearby. A small Korean community resides in Dandong, though most of China’s ethnic Korean minority lives in Yanbian, another border province. That population is shrinking fast, lured by the prospect of easy immigration to South Korea and the quiet end of Korean-language education in China in recent years.