Germany and France have formally acknowledged their roles in the continent’s 20th-century genocides.

This week’s highlights: European powers take a step toward historical accountability in Namibia and Rwanda, Mozambique’s neighbors prepare to intervene, and the leader of the Nigerian jihadi group Boko Haram appears to be dead—again.

This week’s highlights: European powers take a step toward historical accountability in Namibia and Rwanda, Mozambique’s neighbors prepare to intervene, and the leader of the Nigerian jihadi group Boko Haram appears to be dead—again.

What’s in an Overdue Apology?

In the past week, two major European powers apologized for their roles in two genocides that took place nearly a century apart. Germany apologized for its colonial-era atrocities in Namibia, while France took responsibility for its role in “enabling” the 1994 Rwandan genocide.

Germany’s forgotten first genocide. Last Friday, after more than five years of wrangling over the terms of the expression of remorse, Germany at last issued an official apology over atrocities committed more than a century ago in what is now Namibia.

Soon after the turn of the century, Germany committed its first genocide when soldiers tried to wipe out the Herero and Nama people who lived in the territory that was then German South West Africa. It was the first time the German military employed concentration camps.

Between 1904 and 1907, up to 90,000 Herero and Nama were killed in a brutal campaign that nearly exterminated both groups. German troops poisoned local water sources by stuffing the bodies of their victims into wells and subjected the Herero and Nama to scientific experiments, sending their bones to Germany to study.

“We will now also officially call these events what they were from today’s perspective: a genocide,” said German Foreign Minister Heiko Maas. “In light of Germany’s historical and moral responsibility, we will ask for Namibia and the descendants for forgiveness.” That forgiveness will include a payment of 1.1 billion euros (just over $1.3 billion), but the eventual agreement was careful not to use the words “reparations” or “compensation.”

Terms and conditions. These terms, and their implications, have been a sticking point over nine rounds of negotiations since 2015, and they remain a point of division within Namibia.

Until now, Berlin has categorized its relationship to Windhoek as a “special responsibility” that included high amounts of aid and foreign direct investment, but it sought to ensure that it bore no legal responsibility for the atrocities and had no direct obligation toward victims or their descendants.

The negotiations have also exposed fissures within Namibia, with descendants of the Herero and Nama accusing leaders of the ruling South West Africa People’s Organization party of enriching themselves, while also contributing to Namibia’s fraught land debate and the Herero and Nama’s claims to territory lost during the war with Germany.

Even as the official apology was celebrated for its historical significance, traditional clan leaders rejected the terms and the amount offered, which could make the actual implementation of the deal open to further debate.

The issue caused years of tension between the two countries until this year, when two separate studies, one a 600-page report prepared for the Rwandan government and another commissioned by Macron’s administration, found that France played a “significant” role in “enabling a foreseeable genocide” in its support of the Hutu regime of Juvénal Habyarimana.

France’s acknowledgement of its role in enabling the genocide that targeted Rwanda’s Tutsis and killed 800,000 people helped to lay the foundation of a new friendship between Kigali and Paris.

The Duclert Commission, established by Macron, found that France’s perception of a threat from Anglophone countries led it to support Habyarimana rather than now-President Paul Kagame, who was at the time exiled in Uganda. Similarly, the Muse report found that France’s “unwavering support” for the Hutu leader caused it to turn a blind eye to the ethnic tensions.

Macron traveled to Rwanda for the first time last week, and on his visit he said that while France was “not an accomplice” of the Hutu regime, it bore “overwhelming responsibility.”

“France has a role, a history and a political responsibility in Rwanda. It has a duty: that of looking history in the face and recognizing the suffering that it inflicted on the Rwandan people by favoring silence over the examination of truth for too long,” Macron said.

From enemies to allies? Kagame, who has been vehement about his country’s refusal to engage with France over this issue, welcomed Macron and his acknowledgement.

“His words were something more valuable than an apology: They were the truth,” Kagame said during the visit. Cynically, this “new page” as Macron described it, may have more to do with both sides’ security interests on the African continent from Chad and the Central African Republic to farther south.

Rwanda is already trying to play a more significant role in quelling an insurgency in Mozambique’s resource-rich north. After he left Kigali, Macron landed in South Africa, where he discussed Mozambique with South African President Cyril Ramaphosa and made it clear the French navy was available if needed.

Macron’s foreign interests are moving beyond Francophone Africa, and the Rwandan strongman could become a key French ally in the east and center of the continent.

The cost of an apology. The German and French moves could set a precedent for other European countries to reckon with their colonial legacies or military interventions in Africa. The German apology in Namibia could also lay the groundwork for reparations claims for colonial atrocities committed elsewhere, including Belgium’s bloodstained history in the Democratic Republic of the Congo.

Boko Haram’s leader declared dead—again. Abubakar Shekau, the face of the Nigerian insurgent group Boko Haram, is believed to be dead. Confirmation of Shekau’s death is not official, and the Nigerian military is said to be investigating its accuracy.

After all, the military had incorrectly announced Shekau’s death nearly half a dozen times in the last decade, only to be humiliated by Shekau. But if it is true, it would mark a significant power shift in the regional insurgency. Shekau is believed to have been killed when he detonated a bomb to avoid capture by rival group Islamic State West Africa Province. 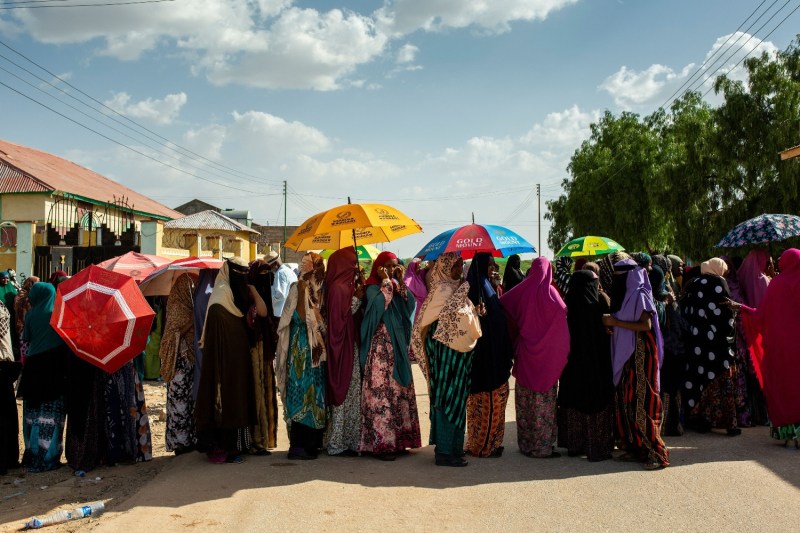 Women line up to vote in Somaliland’s elections at a polling station in Gabiley, a city in the self-declared independent territory that is internationally recognized as part of Somalia, on May 31.MUSTAFA SAEED/AFP via Getty Images

As Somalia’s election remains in limbo over a political crisis, Somaliland’s independent election bolsters its ongoing call for autonomy and international recognition. But the run-up to the election was marred by reports of arrests of opposition candidates and journalists, blemishing the democratic image the state of 4 million people is trying to cultivate.

Troops are probably on their way to Mozambique. Southern African leaders gathered in Maputo, Mozambique, last week with the clear position that Mozambique’s insurgency required a military solution.

The presidents of Botswana, South Africa, Malawi, and Zimbabwe (Tanzania sent the leader of Zanzibar) met with Mozambique’s President Filipe Nyusi to discuss the insurgency in the north of the country that has left more than 2,600 people dead.

A technical committee representing the Southern African Development Community earlier recommended nearly 3,000 regional troops on the ground, but as Rwanda and France show increasing interest in intervention, the region may not be able to maintain its influence over the response to the growing insurgency.

Volcanic aftershocks in the Congo. More than a week after Mount Nyiragongo erupted, the active volcano in the Democratic Republic of the Congo’s east remains a fuming threat. The eruption on May 22 sent rivers of lava close to Goma, a city of 670,000. At least 30 people were killed and 400,000 evacuated in what could become a humanitarian crisis.

While the number and magnitude of aftershocks have decreased, volcanologists cannot rule out the worst-case scenarios of deep-water landslide that could release underground gas into Lake Kivu, or an earthquake that could see lava seeping through fissures in the earth. Meanwhile, also in the east of the country, the rebel group known as the Allied Democratic Forces, which is believed to be linked to the Islamic State, massacred more than 50 people.

An inclusive beauty pageant. South Africa is perhaps the most progressive country on the African continent when it comes to LGBTQ rights. Last week, the Miss South Africa pageant was lauded for including transgender contestants in its annual search for the country’s most beautiful woman.

The rule has been in effect for three years but it attracted more attention this year against a context of increasing awareness of trans rights. In 2018, a Spanish contestant became the first trans woman to enter the Miss Universe pageant.

Beauty pageants have increasingly shed their sexist history, albeit slowly. While the swimsuit category and waist requirements remain in place, the women entering the pageants are using the pageant runway as a political stage. In 2019, Miss South Africa winner Zozibini Tunzi became the first Black woman with short, natural hair crowned Miss Universe.

It sparked a debate over more inclusive beauty standards that foreshadowed an increasingly politicized environment. At this year’s international competition, Miss Myanmar spoke out daringly about the violence in her country, raising a sign saying “Pray for Myanmar” after giving an interview in which she said, “They are killing our people like animals.” Miss Singapore wore a cape declaring “Stop Asian Hate,” and Miss Uruguay paid homage to the country’s LGBTQ community.

Still, even the progressive Miss South Africa pageant couldn’t change the rules that contestants must have never been married or mothers if they want to enter, with organizers saying they still had to adhere to global pageant standards to ensure they can compete.

A new survey by Afrobarometer may explain why: The study showed that when surveyed on international influence over Senegal’s politics and economics, Senegalese citizens held more favorable attitudes toward China and the United States and had negative views of French influence; they were less hostile to Nigerian and Russian influence.

Is sending troops to Mozambique a good idea? “Past experiences suggest it’s not. And that it won’t help,” writes international relations scholar Gilbert Khadiagala, laying out a timeline of regional military missteps in the Conversation Africa.

The dark side of Rwanda’s rebirth. “Captivating, gripping, and depressing,” is how Mvemba Phezo Dizolele describes Michela Wrong’s Do Not Disturb: The Story of a Political Murder and an African Regime Gone Bad, in a Foreign Policy review. Dizolele argues that Rwanda’s aggressive foreign policy under Kagame continues to destabilize the Great Lakes region.