Biden is likely to have more leverage over the fragile new government in Israel.

Welcome to Foreign Policy’s SitRep! Jack Detsch and Robbie Gramer, reporters at Foreign Policy magazine, here. Friendly reminder before we start: Those cicadas may look tasty, but don’t eat any if you have a shellfish allergy, per the U.S. Food and Drug Administration.

Alright, here’s what’s on tap for today: Biden looks for a tighter grip on Israel with new government, top counter-China official at the U.N. is ousted, and advocates say the Pentagon is still not doing enough on civilian casualties in Yemen.

Welcome to Foreign Policy’s SitRep! Jack Detsch and Robbie Gramer, reporters at Foreign Policy magazine, here. Friendly reminder before we start: Those cicadas may look tasty, but don’t eat any if you have a shellfish allergy, per the U.S. Food and Drug Administration.

Alright, here’s what’s on tap for today: Biden looks for a tighter grip on Israel with new government, top counter-China official at the U.N. is ousted, and advocates say the Pentagon is still not doing enough on civilian casualties in Yemen.

If the rainbow coalition led by opposition leader Yair Lapid and right-leaning Yamina party leader Naftali Bennett holds, U.S. President Joe Biden could see his leverage over Israel begin to grow, with the fragile new government unlikely to want to step on any toes in Washington.

“An X factor is how they’ll want to engage the Biden team,” said Joel Rubin, a former deputy assistant secretary of state during the Obama administration who led Jewish outreach for Sen. Bernie Sanders’s presidential campaign. “A new fragile government will be hesitant to weaken the U.S.-Israel relationship, so Biden will likely have more leeway now with the Israeli government than he did with Netanyahu in power.”

Jilted exes. That’s if—and this is a big if—the coalition can stay together. There’s one thing that several of the top dogs in the new governing coalition have in common: Many of them are former close confidants of Netanyahu.

And Netanyahu held that role until he was forced into a coalition government last year with former Israel Defense Forces chief Benny Gantz, who will also join the new government.

No one doubts this is a shotgun marriage. The question is this: What will the new coalition partners be able to agree on besides their distaste for Netanyahu?

Meet the new boss. The 49-year-old Bennett at a glance seems like a hard-liner cut out of Netanyahu’s cloth, despite the souring of ties between the two. He’s a tech entrepreneur who once worked as an advocate for Israeli settlement in the West Bank. He hopes to annex the area and does not believe in Palestinian statehood.

But the big-tent coalition covers “the full spectrum of Israeli society,” Rubin said, including the United Arab List—the first Arab political party in the government in decades—and it may force Bennett to govern from further toward the center.

That trend has been on display with past right-leaning Israeli prime ministers who pushed for peace with the Palestinians, including Menachem Begin, Yitzhak Rabin, Shimon Peres, Ariel Sharon, and Ehud Olmert.

Early test. Gantz, the current defense minister, will meet with U.S. Defense Secretary Lloyd Austin at the Pentagon on Thursday as Israel looks to replenish its stocks of the Iron Dome missile defense system.

The Israelis are asking for $1 billion from the United States for more interceptors after an 11-day standoff with Hamas last month, and they’re being backstopped by a group of 55 lawmakers on both sides of the aisle asking Austin to cough up the money. But not everyone is a fan of rolling out the same missile defense game plan as the Israelis face a tenuous cease-fire.

SitRep Exclusive: In January 2020, the State Department tapped a career diplomat, Mark Lambert, to be special envoy for countering China’s growing influence at the United Nations after the Trump administration suffered a series of embarrassing diplomatic defeats in Turtle Bay. Now, Lambert is slated to leave his post in the coming weeks, officials tell SitRep. (A State Department spokesperson confirmed the move.)

Robert Mueller will teach a course this fall at the University of Virginia School of Law on the President Donald Trump-Russia investigation, as the Washington Post reports.

Caught in the crossfire. The U.S. Department of Defense released a report to Congress on civilian casualties saying the U.S. military killed approximately 23 civilians and wounded 10 others during military operations in 2020.

Human rights organizations say the Pentagon remains far behind in acknowledging the extent of civilian damage it has caused in military operations, particularly in the Yemen conflict, where defense officials only acknowledge 12 of 15 deaths that nongovernmental organizations attribute to American strikes.

And the Defense Department did not pay any so-called ex gratia payments for the families of victims last year.

Hey Russia, you seeing this? The U.S. Navy’s P-8A sub-hunting planes have launched anti-ship Harpoon missiles in European waters for the first time, the Navy announced. The move came during a joint missile defense exercise in the North Atlantic aimed at showcasing NATO presence in the region as Russia beefs up its Arctic military footprint.

Too many cooks? The Biden administration has appointed a slew of special envoys to manage foreign-policy challenges, even while leaving dozens of ambassadorial and other senior diplomatic posts empty. Veteran diplomats worry the proliferation of envoys is getting out of control, as we reported this week.

Not in my backyard. State lawmakers in Texas have unanimously approved a bill that would ban Chinese, Iranian, North Korean, and Russian companies from setting up critical infrastructure projects in the state.

The legislation was partly inspired by a Chinese-company-owned wind farm in the small town of Del Rio, Texas, near the U.S. Air Force’s largest training base that members of Congress worried could be used to spy on American assets, as we wrote last year. The bill is now sitting on Gov. Greg Abbott’s desk awaiting approval. 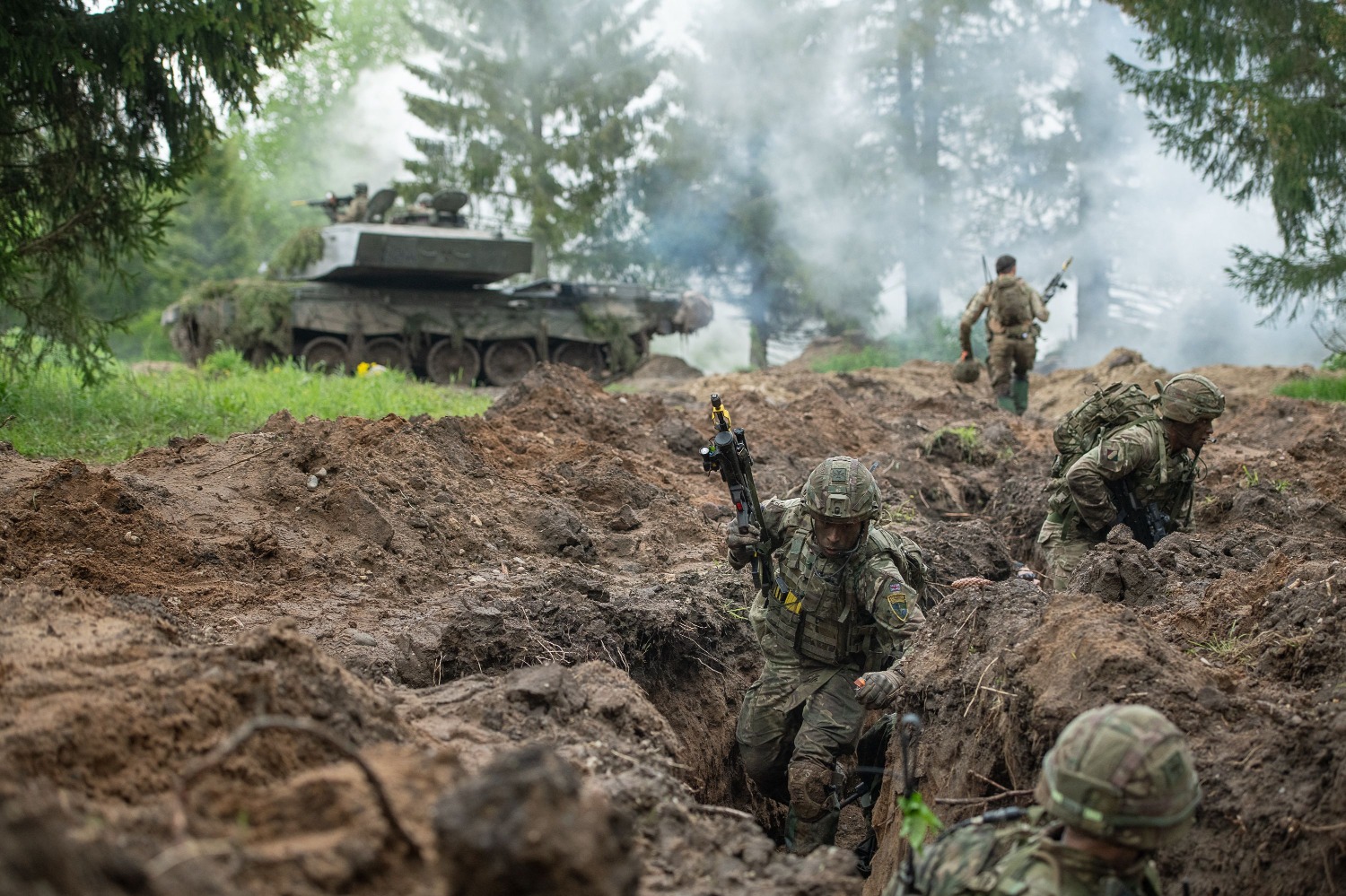 Estonian defense forces and troops from eight other NATO countries take part in a large-scale military exercise in the Baltic region near the Russian border on May 27.Raigo Pajula/AFP via Getty Images

Remembering Midway. This week marks the anniversary of the pivotal 1942 Battle of Midway that cemented U.S. naval dominance in the Pacific over Japan during World War II.

Check out this declassified U.S. Navy Pacific fleet message sent on May 31, 1942—four days before the main battle—that demonstrates just how much the U.S. Navy knew about enemy forces in advance, despite the Japanese fleet’s efforts to lay a trap for U.S. aircraft carriers.

Monday, June 7: Vice President Kamala Harris departs on her first foreign tour, to Guatemala and Mexico, in a trip aimed at addressing migration from Central America.

Wednesday, June 9: Five Biden picks to be U.S. ambassadors in Africa have their confirmation hearing before the Senate Foreign Relations Committee, headlined by Larry Edward André, the nominee to be U.S. ambassador to Somalia. Robbie and Jack first scooped the picks back in April.

Friday, June 11: Biden takes off for his first trip abroad to Europe, including a two-day G-7 summit in London and a NATO summit in Brussels.

Baby we were making straight A’s. Thanks to SitRep reader Osita Iroku, who gave us not one but two national security wonk rock bands in response to our prompt in last week’s newsletter: “My ideal rock band would be called ‘Brix Inda Wall’, and would feature [Secretary of State Antony] Blinken on lead guitar, [former National Security Advisor John] Bolton on bass, [former President Barack] Obama on the drums, and Hillary [Clinton] as lead singer. The opposing band would be a duo named ‘Stix N Stonez’, featuring Xi [Jinping] on the mic and Vladimir [Putin] on the guitar.”

“Imagine how those six artists together on one stage, uniting the world through music, could change the course of human destiny,” Iroku wrote to SitRep. Well, it’s certainly more fun than multiple rounds of arms control talks.

If you’re not first… You’re last, as the fictitious Will Ferrell-acted NASCAR superstar Ricky Bobby once said, and it’s true in politics, not just racing. The Pentagon has done away with plans to replace the Boeing 757 fleet that serve as Air Force Two, Defense One reports, a casualty of the Air Force’s budget request.

But the service is still moving ahead with efforts to replace Austin’s so-called doomsday plane that’s able to transmit the nuclear launch codes in midair.