Attacks on journalists and a proposed law increasing government media oversight do not bode well for democracy.

It’s been a turbulent week for the Pakistani press. Last Tuesday, journalist Asad Ali Toor was assaulted in his home. Toor, known for his criticism of the military, said his assailants identified themselves as members of Inter-Services Intelligence (ISI)—a charge the ISI promptly denied. At a protest several days later, television anchor Hamid Mir blamed Pakistan’s armed forces for crackdowns on journalists. On Monday, Mir learned he had been taken off the air.

Pakistan has a vibrant press, with dozens of outlets producing content that often takes shots at elected officials. But criticism of the military and intelligence services is a red line. State intimidation tactics, from withholding advertising revenue to waging hate campaigns on social media, have driven many journalists and their employers to self-censorship. Outlets that have ignored these warnings have mysteriously gone off the air or seen their distribution interrupted.

In Pakistan, journalism can sometimes be a death sentence. Freedom Network, a media watchdog, found 33 journalists were killed for their work between 2013 and 2019 in Pakistan. Although deadly violence against journalists has decreased in recent years, attacks continue, even in relatively safe places such Islamabad, where Toor and another journalist were both assaulted in recent weeks.

Pakistan fares poorly in global press freedom rankings, and since Pakistani Prime Minister Imran Khan took office in 2018, it has fallen six places (to 145) in the Reporters Without Borders World Press Freedom Index. It’s not alone: Elsewhere in the region, India ranks 142 and Bangladesh ranks 152. In these countries, like Pakistan, declining press freedom has played out against a worsening crackdown on dissent that also targets activists, scholars, and nongovernmental organizations.

Attacks against journalists and other government critics are rarely fully investigated, but many observers—including human rights researchers, lawyers, U.S. officials, and some Pakistani journalists themselves—have long suspected Pakistan’s powerful military and intelligence services are behind many of them. State-led campaigns to crush dissent are a regional phenomenon: Indian journalists have been accused of sedition for covering anti-government protests, and Bangladesh has arrested social media users for criticizing the government’s pandemic response.

Pakistan’s political polarization exacerbates the fraught media environment. Liberals and opposition figures lionize anti-establishment journalists such as Toor and Mir, but they are reviled by government supporters. (Some of Toor’s critics have noted his supporters have been silent about his derogatory comments toward Shiffa Yousafzai, a prominent female journalist, earlier this year.) Pro-government voices, especially right-wing nationalists, accuse these journalists of faking attacks for attention or asylum abroad. They also decry how less attention is accorded to journalists attacked for critical coverage of the opposition.

The Pakistani government has used a 2016 cybercrime law as a pretext to target anti-government content online. But a new bill could make the environment even worse for journalists by centralizing government oversight of the media under a single authority and increasing outlets’ dependence on the state. As media analyst Huma Yusuf wrote in a column this week, “What better way to turn media outlets into state mouthpieces than by making them entirely reliant on the government to stay in business?”

During a meeting with then-U.S. President Donald Trump in 2019, Khan said Pakistan boasts “one of the freest presses in the world.” The media oversight bill could become one more powerful data point for those that derided him. In fact, under Khan, Pakistan’s press freedom looks to get even worse.

June 8: The U.S. Institute of Peace hosts a discussion on the resurgence of the Pakistani Taliban.

June 11-13: London hosts a G-7 summit, with India attending as a virtual guest.

Mixed news for India’s economy. According to government figures, India’s GDP contracted by 7.3 percent in fiscal year 2020-2021. (In India, fiscal years run from April to March.) The decline is the biggest since independence and the first contraction since fiscal year 1979-1980. The large drop can be attributed in great part to the nationwide pandemic lockdown imposed last spring.

The good news is India registered 1.4 percent growth in the last quarter of the fiscal year, but the rebound took place in the weeks just before India’s devastating second wave. Macroeconomic performance in April and May will likely be poor, although New Delhi’s decision not to impose another lockdown may mitigate some economic shocks.

Indian Prime Minister Narendra Modi’s government will prioritize economic recovery for the remainder of its second term, raising difficult policy questions. One is how to approach the economic relationship with China, which has invested heavily in India in recent years. New Delhi curtailed commercial ties with Beijing after last year’s deadly border conflict plunged bilateral relations to their lowest point in decades. 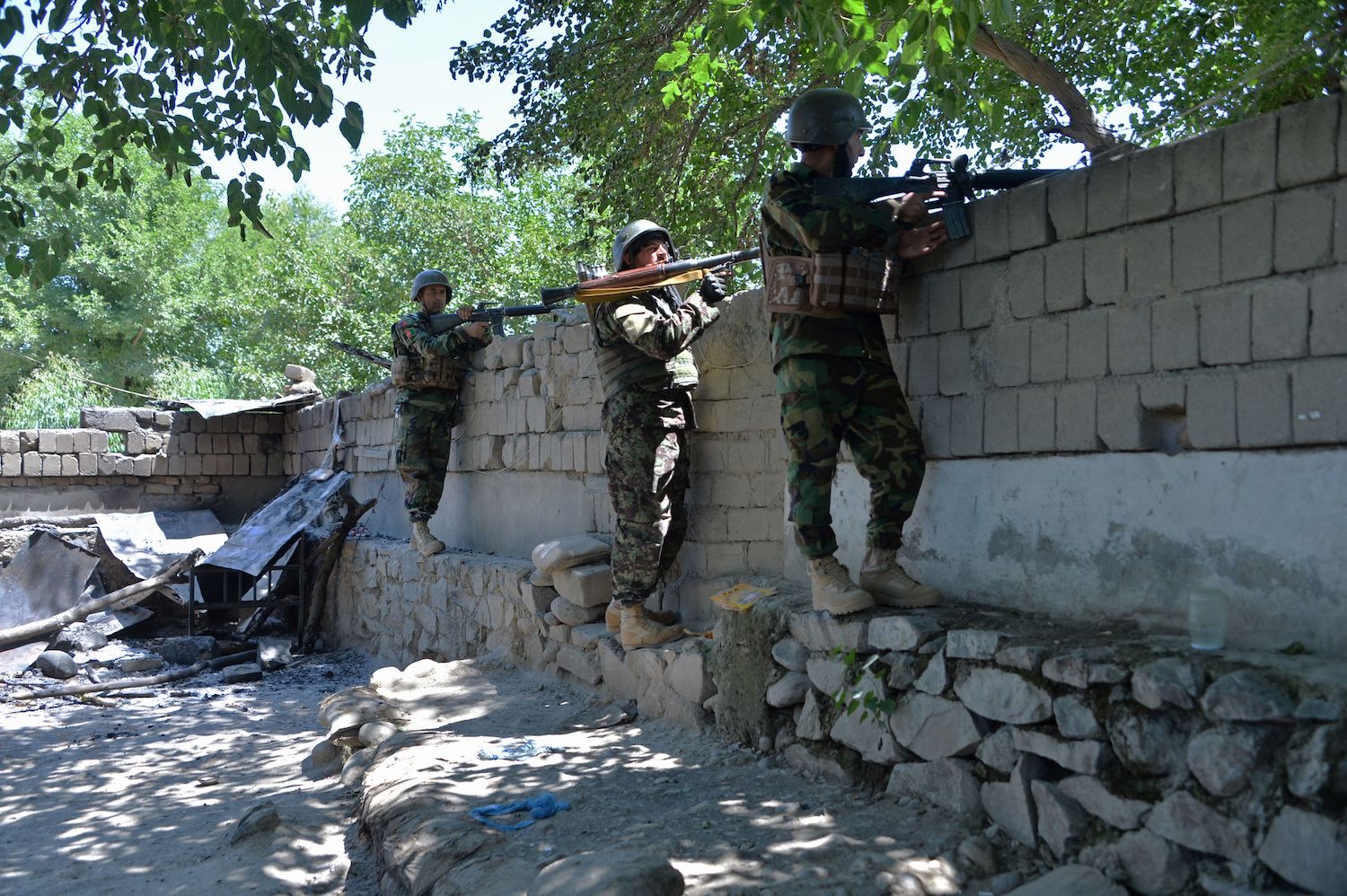 Afghan security forces take their positions during a clash with Afghan forces in Mihtarlam, Afghanistan, on May 24.NOORULLAH SHIRZADA/AFP via Getty Images

Afghanistan security update. Afghanistan has seen a raft of troubling developments for its security situation in the last week. Besieged Afghan troops are surrendering dozens of rural outposts and bases to the Taliban, according to the New York Times. And another report revealed fresh evidence of continued cooperation between the Taliban and al Qaeda. Afghan officials have acknowledged “thousands of families” have fled their homes in four provinces amid escalations in violence.

This all comes against the backdrop of continued U.S. troop withdrawal. On Tuesday, the U.S. Defense Department announced up to 44 percent of the U.S. pullout is now complete. With peace talks making little progress, further destabilization is all but inevitable. One top U.S. partner has already read the writing on the wall. Citing an “increasingly uncertain security environment,” Australia closed its embassy in Kabul last Friday.

Pakistan earns debt relief. This week, negotiators reached an agreement on a “debt-for-nature” accord between Pakistan and four key donors: Canada, Germany, Italy, and the United Kingdom. Under the arrangement, which will be finalized on June 5, the donors will reduce Pakistan’s loan obligations in return for it investing its debt in climate-related activities. The move will have political benefits for Islamabad: The Khan government has identified debt relief and environmental conservation as top policy priorities.

There’s trouble in India’s paradise. In Lakshadweep, a picturesque union territory of sun-kissed islands 120 miles off the mainland in the Arabian Sea, a new administrator is attempting to ram through a series of new laws opposed by local residents, who are majority Muslim. Praful Khoda Patel, a Modi ally, has proposed measures, including banning beef products, detaining people without trial for up to a year, and seizing locals’ land for infrastructure development.

The laws were forwarded to India’s Ministry of Home Affairs for approval earlier this week. Patel appears to be exporting the controversial policies championed by Modi and his allies on the mainland to a more remote place away from scrutiny. Speaking anonymously to Al Jazeera, residents said Patel’s administration has also fired local workers and sought to replace them with people brought from the mainland.

However, the political opposition and even some members of the ruling party have railed against Patel’s actions. Rising local anger raises the risk of protest and unrest—a scenario New Delhi can ill afford as it focuses on economic recovery.

“I’ve been present at negotiations for six or seven months. Their attitudes towards me personally have been that we are there just for decoration.”

—Fawzia Koofi, one of four female members of Afghanistan’s peace negotiation team, speaking to OZY about how she is perceived by the Taliban.

Writing for the Dhaka Tribune, political analyst Farid Erkizia Bakht scoffs at the attention generated by the Chinese ambassador’s recent warning to Bangladesh not to join the Quadrilateral Security Dialogue, known as the Quad. Bakht argued the envoy’s view is perfectly understandable. “Beijing cannot just roll over if Dhaka decides to succumb to American pressure and align with the Quad,” he wrote.

A Nepali Times editorial argued Nepal must be careful not to get dragged into deepening political rivalries within India. “Nepal appears to be caught up in a proxy war for India’s soul between the [ruling] BJP and the left-liberal secularists,” it argued. “We have to learn to tread carefully and not be sucked into India’s bitter internal ideological confrontation.”

Mitali Nikore, Shruti Jha, and Priyal Mundhra, all affiliated with Indian think tank Nikore Associates, argued in the Indian Express that rural Indian women have “borne the burden” of the coronavirus pandemic. Twelve million women lost their jobs during India’s first wave, and nearly 6 million women lost their jobs this April alone. “Governments must lead the way in charting a path of sustainable, gender-inclusive economic recovery, starting by focusing on unemployed rural women,” they wrote.