An overloaded health system struggles to deal with a deadly second wave of the coronavirus.

MORENO, Argentina—At the end of a first-floor wing of the Mariano y Luciano de la Vega Hospital in the Argentine municipality of Moreno, nurses and doctors line up daily at a window with a plastic divider and steel bars, replenishing supplies for the front lines: bags of face masks, bottles of sanitizing gel. “I got five visors a while ago,” said one health care worker. “I can give you five more,” the woman behind the counter told her. Nearby, past a sign that reads “Management” in Spanish, the hospital’s director, Emmanuel Alvarez, is navigating Argentina’s torrential second wave of COVID-19 cases.

This day unfolded like many others during the pandemic here, with razor-sharp focus on each and every bed—juggling patients who have COVID-19 and those who suffer from other ailments afflicting a working-class and low-income population. Staff process equipment, manage oxygen supplies, and teach new doctors the ropes in the middle of a crisis.

“Every bed is super important,” said Alvarez, 36, when I visited the hospital last week. “We have to have a minute-by-minute accounting of the available beds,” he said. “The collapse can happen because of COVID or because of something else.”

The prospect of a collapse is very real. Argentina has been cataloging record levels of contagion—41,000 new cases in one day last week. The country of 45 million people has counted more than 3.8 million cases and nearly 80,000 deaths since the pandemic began, with a growth rate trending upward even as other countries’ rates begin to slow. In the last two weeks, it has ranked among the three countries with the highest number of deaths per capita. Around 95 percent of intensive care beds are occupied in eight of the country’s 23 provinces, according to the Argentine Intensive Care Society, with 90 percent occupied in another five jurisdictions, including the capital city. Countrywide, the government says 78 percent of its intensive care beds are full. 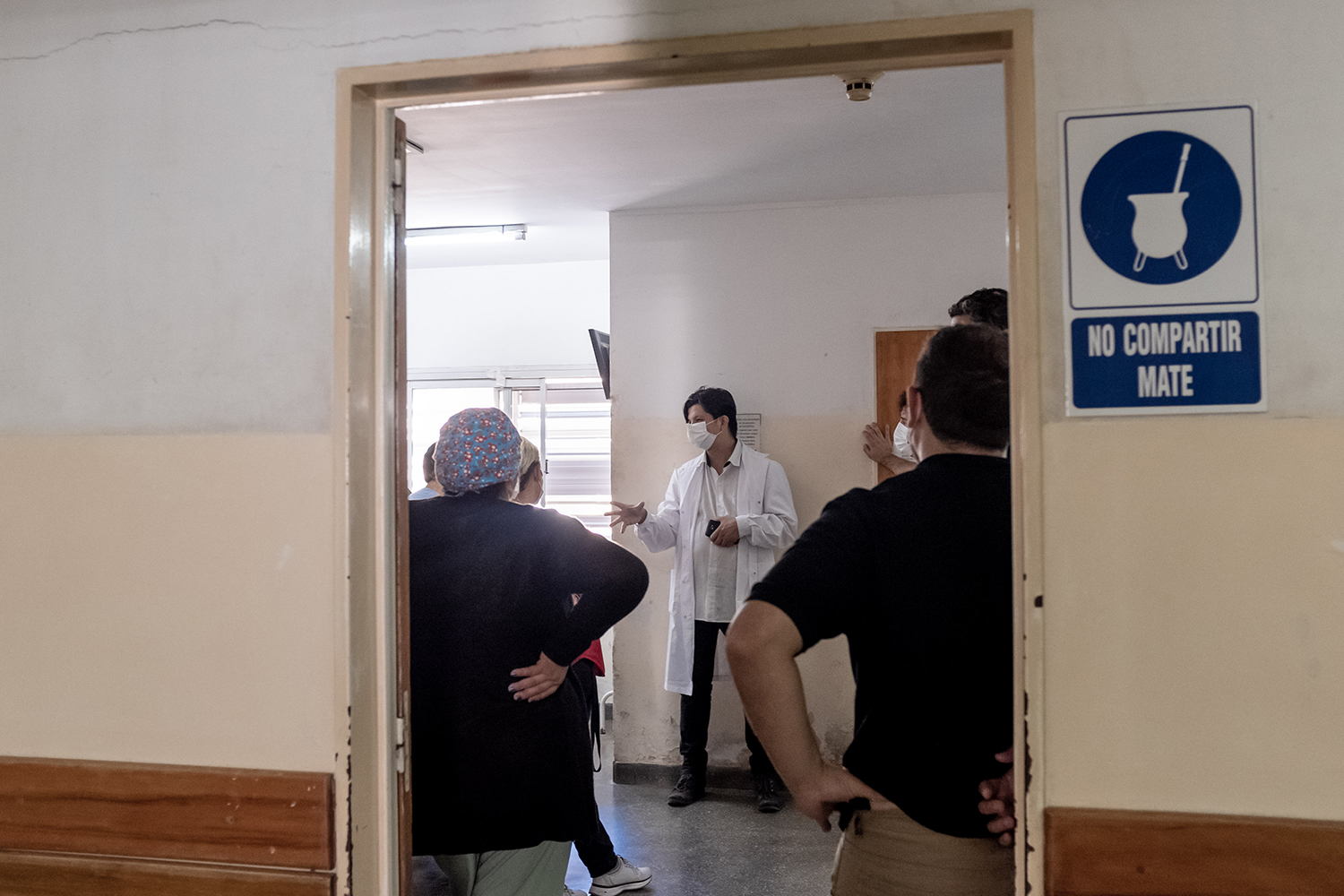 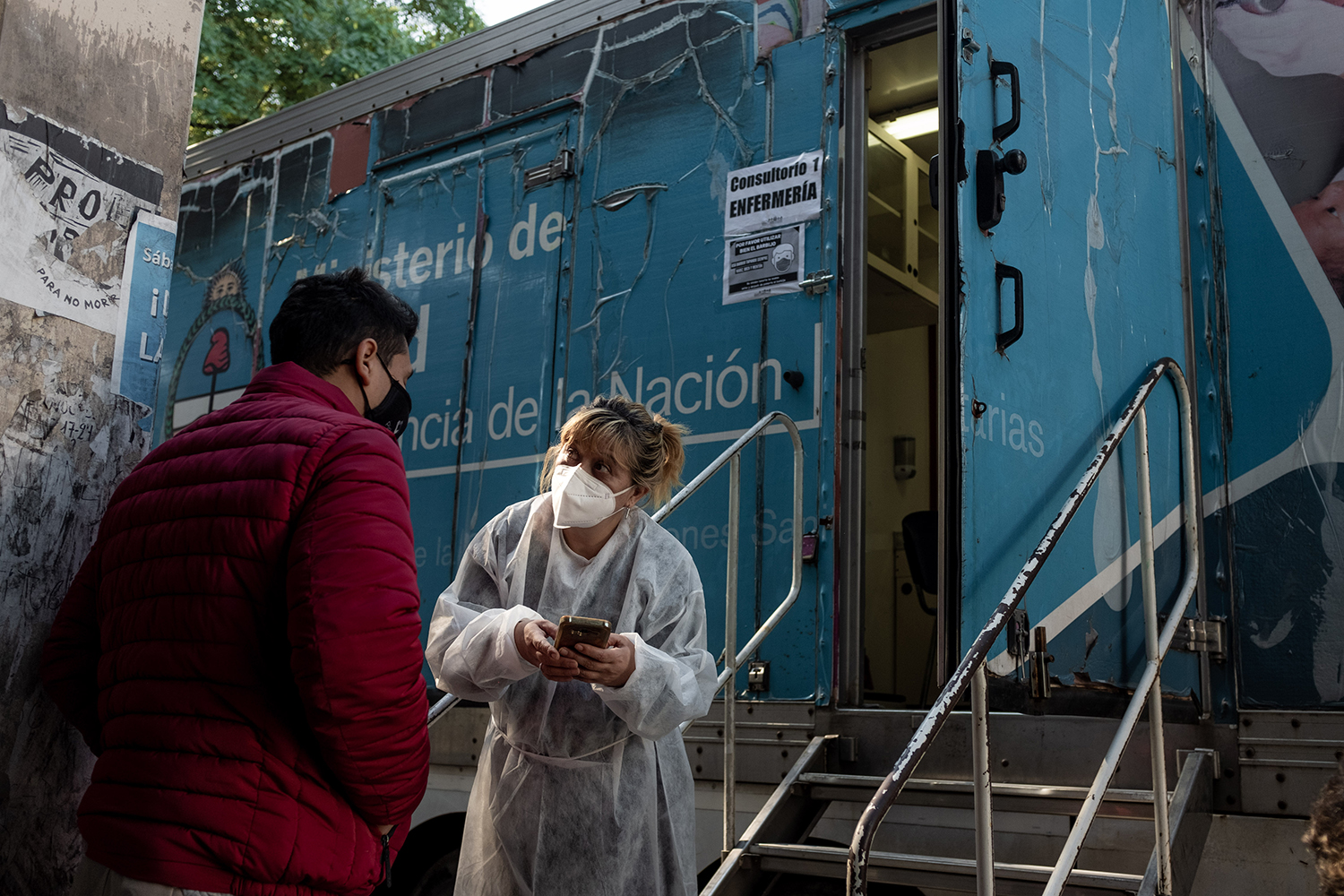 A hospital worker helps a patient at the mobile health unit outside Mariano y Luciano de la Vega on May 7. The unit adds capacity to offer consultations and attend to minor patients in preparation for an influx of COVID-19 patients. Anita Pouchard Serra for Foreign Policy

“We have a lot of factors that are working against us,” said Alvarez, who took the reins of the threadbare public hospital in February 2020, before the virus touched down in Argentina. In April, he wrote an open letter that went viral, urging authorities to put the country back on a strict lockdown in order to quell contagion. Argentina’s winter has not yet arrived, and mutant strains of the virus, which are associated with higher rates of transmissibility and death, are circulating widely. Alvarez says the impact of the new strains is visible: Health care workers are seeing more serious cases of the illness in younger, healthier patients.

“People don’t understand the historic moment that they’re living,” Alvarez said. “The health system did everything it could, but it won’t be enough. We don’t think it will be enough.”

On May 20, Argentine President Alberto Fernández announced that he was activating another temporary lockdown as the country faced “the worst moment since the pandemic started.” For nine consecutive days, the national government prohibited all social gatherings, closed schools and places of worship, and limited circulation. In some places, like the capital city, businesses were allowed to remain open and offer window service.

On Monday, the first day that restrictions eased, Argentina recorded 28,175 cases and 638 deaths. The new daily caseload has jumped again to more than 35,000. And it’s possible that the real number is actually much higher. Argentina has recorded high test positivity rates—32 percent this week—which is a sign that testing itself is low. Many doubt the nine days will be enough to significantly contain the virus. While the lockdown tamped down circulation, it didn’t extinguish it. Some predict that intermittent closures will be required through the cold months ahead. In one sign of the ongoing severity, the organizers of Copa América announced that Argentina would not host the largest soccer tournament in South America only two weeks before it was due to begin.

Mariano y Luciano de la Vega is, in many ways, a microcosm of what is happening across the country. Ninety-five percent of its critical care beds are occupied. When the pandemic started, there were just eight intensive care beds in a hospital that serves a population of 150,000. Now, thanks to a cash injection from the state, it has 31. Argentina has a fragmented health care system made up of public, private, and social security facilities. The public ones are the least equipped, and it’s there that the national government has focused its efforts to combat the coronavirus, opening new hospitals, expanding existing facilities, and building dozens of temporary isolation centers, clinical units, and modular hospitals, including one in Moreno. 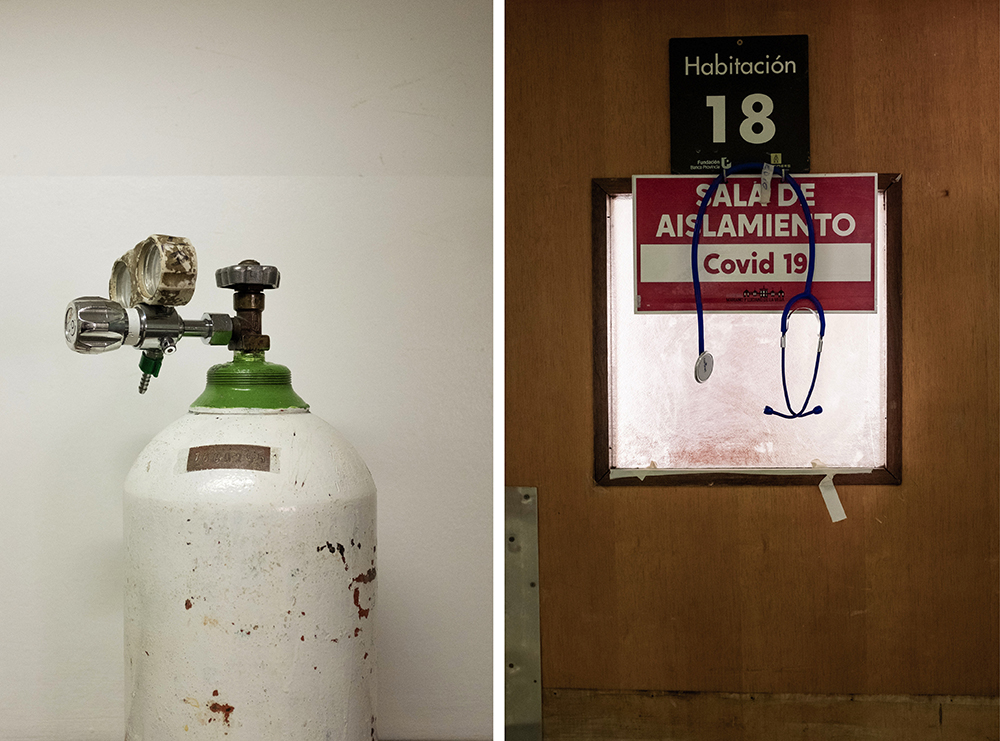 An oxygen tank and a sign to one of the new COVID-19 isolation rooms at Mariano y Luciano de la Vega on May 7. Anita Pouchard Serra for Foreign Policy

But the unprecedented demands of the pandemic have complicated the delivery of health care. The soaring price of medicine and other supplies causes delays, while extreme burnout among health care workers has led to conflicts between colleagues or with patients, Alvarez said. “There are doctors here who are doing three or four 24-hour shifts a week. It’s not a question of money. They are doing it because they know it’s necessary,” he said. “So, to the people who say, ‘Well, the government can add beds, spend more’—that’s not the way to solve this.”

Just how to contain the coronavirus—and adapt associated public policies—continues to generate friction here. With midterm elections in November, the crisis has devolved into a shouting match in a polarized political landscape. The right-wing opposition accuses Fernández’s center-left government of bungling the purchase and administration of vaccines and of mismanaging the crisis in general to the point of financial ruin. In February, the health minister resigned over a vaccine line-jumping scandal. Fighting restrictions and seizing on discontent, some members of the opposition have fueled anti-quarantine marches that have cropped up across the country and led to altercations with police. Education has become a highly politicized issue, with a legal battle breaking out between the federal government, which sought to move to online learning amid skyrocketing cases, and the city of Buenos Aires, which has insisted that in-person classes continue. Following the latest lockdown, the country remains divided on the issue, with a small majority of provinces favoring online learning. 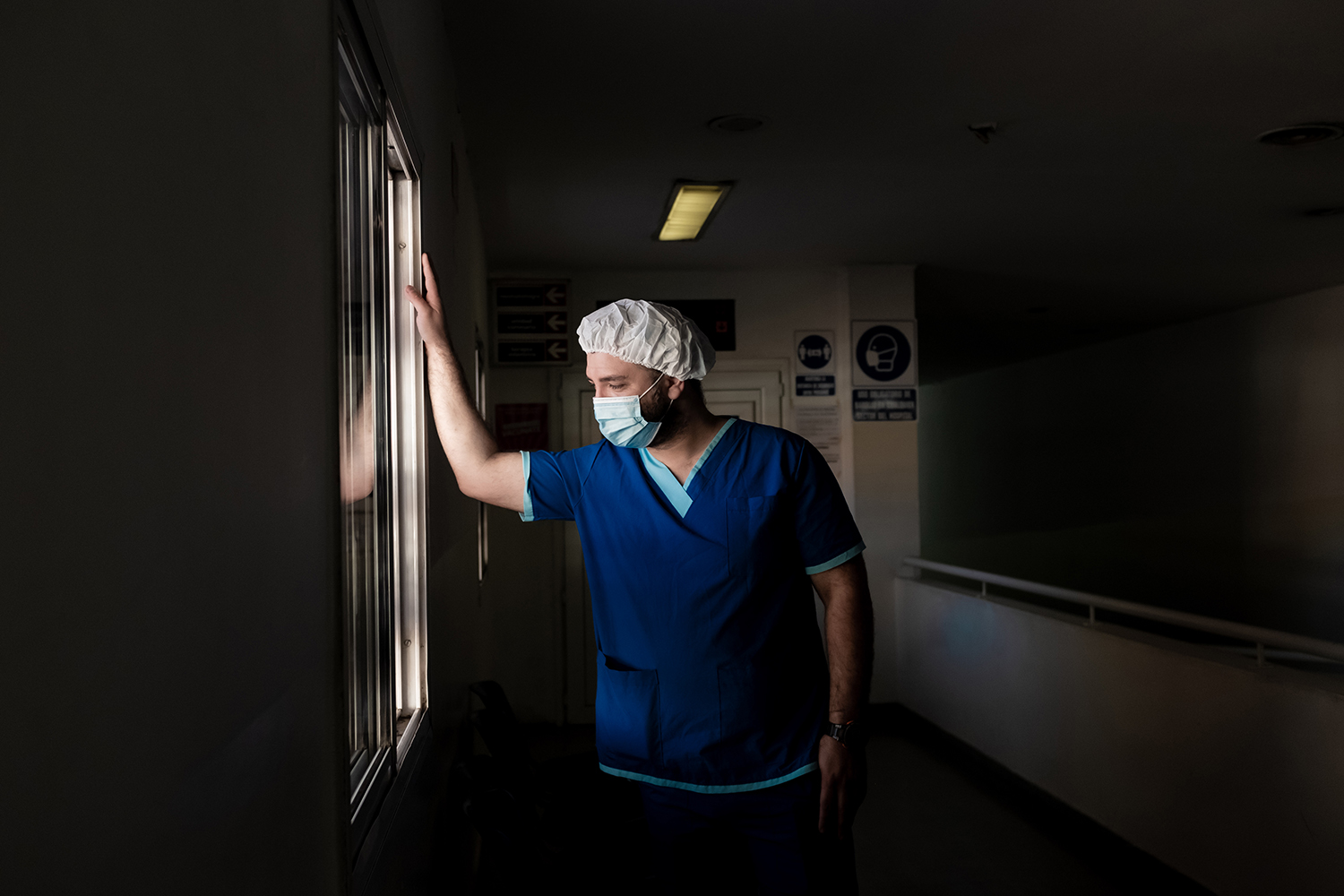 Damián Leyes, the supervisor of the morning shift at Mariano y Luciano de la Vega, stands in the hallway of the hospital on May 7. Anita Pouchard Serra for Foreign Policy

Meanwhile, the cash-strapped government has announced new measures to try to stop the financial bleeding after the economy sank by 9.9 percent last year. The government provided emergency cash payments in 2020 and extended financial aid to companies, but the poverty rate still rose to 42 percent last year. And while the International Monetary Fund forecasts growth of 5.8 percent in 2021, annual inflation is predicted to reach 46 percent, a disastrous figure given Argentina’s long-running debt crisis.

Beyond statistics, the economic toll is already evident in a place like Moreno, a city on the working-class outskirts of Buenos Aires, known as the conurbano (the ring of municipalities around the capital). Here, poverty outstrips the national level by almost 10 percentage points. That’s written on the faces of those loitering around Moreno’s Plaza San Martín, mid-quarantine, as mothers beg for pesos to buy milk for their babies.

At the entrance of the nearby train station last weekend, Carola Martinez, 23, lined up dozens of bottles of sanitizing alcohol on a small table—her second day selling the items. She had been working in a food counter in Moreno, but everyone lost their jobs in the latest shutdown. Her 1-year-old son, Valentino, needs to eat, so she scrambled to source a product she knows is in demand.

“People need this now,” she said, as a man approached to take a look at the merchandise, selling for 100 pesos a bottle. The amount of foot traffic meant Martinez was having a pretty good day in terms of sales, even though she wished that people would stay indoors.

“I would be home if I didn’t have to feed my son,” she said. 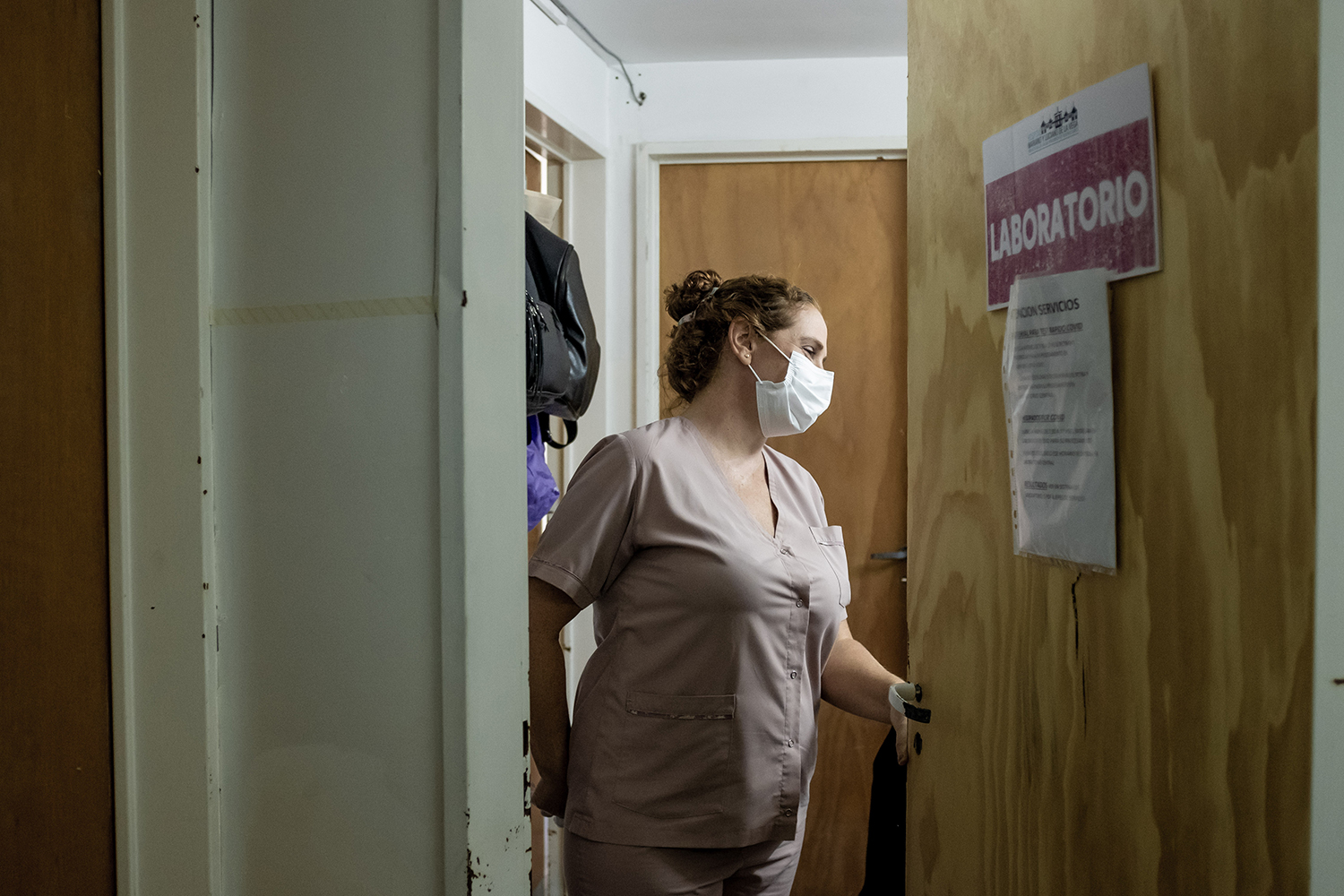 The following day, in another corner of the conurbano, Vanesa and Patricia Diaz waited in anticipation on a university campus. Argentina vaccinated more than 350,000 people over the weekend—the largest chunk so far—and on Monday, it received its biggest delivery of vaccines yet. Some 2.1 million doses of Oxford-AstraZeneca arrived at Buenos Aires’s international airport, on the heels of recent shipments of Sputnik V. The vaccination campaign, slow to get started, appears to have hit its stride now, with more than 20 percent of Argentines receiving their first dose.

That momentum has generated a sense of relief that was palpable at the large sporting facility in General Pacheco, where the Diaz sisters stood. They had accompanied their parents, both in their 50s, to their first shot. Their father, a handyman who was hit hard financially by the pandemic, is still facing aftereffects of the disease. Their mother was nervous about the vaccine but was getting it at her daughters’ insistence. “We hope things can get back to normal soon,” said Vanesa Diaz, 32.

For the Diaz family, getting a vaccine represented a light at the end of the tunnel. For Alvarez, the outlook is more bleak: “Even if you vaccinate everyone at this point, the curve is so high in Argentina that people are going to keep getting infected.” He hopes the country can hang on.

Natalie Alcoba is a freelance journalist based in Buenos Aires. She writes extensively on the feminist movement and collective organization in Latin America.