How to Escape the COVID-19 Debt Trap

This crisis may be a turning point for how the IMF treats indebted nations.

The highlights this week: a look at adjustments to the global financial safety net that could relieve Latin America’s crippling COVID-19 debt, a Chinese economic blow to Venezuela, and new heights for Nicaragua’s crackdown on political opposition.

The highlights this week: a look at adjustments to the global financial safety net that could relieve Latin America’s crippling COVID-19 debt, a Chinese economic blow to Venezuela, and new heights for Nicaragua’s crackdown on political opposition.

As some Latin American countries continue to battle COVID-19 surges, many are also weighing how they will repay debt burdens that significantly increased during the pandemic. Latin America and the Caribbean’s regional debt-to-GDP ratio rose from 68.9 percent in 2019 to an estimated 79.3 percent in 2020, making it the most indebted region in the developing world.

This week, Argentina activated a 60-day grace period to try to reach an agreement on debt it owes to countries in the Paris Club group of creditor nations. Argentina as well as other Latin American countries have faced public resistance to pre-pandemic International Monetary Fund programs to cut their spending; the tax hike that sparked Colombia’s ongoing protests was related to such a program as was the announcement of planned spending cuts in Costa Rica that prompted protests in October 2020.

But spending cuts may exacerbate problems that pushed 22 million Latin Americans into poverty in 2020. Meanwhile, the green transitions required to meet countries’ Paris Agreement commitments require more, not less, public spending. And delayed recoveries in low- and middle-income countries could act as a drag on the entire global economy.

The International Monetary Fund (IMF) is especially influential over the region’s more vulnerable indebted nations. It loaned upwards of $66 billion to Latin American countries during the pandemic and also holds sway with bilateral lenders and private bondholders. Despite the fund’s rhetoric, after the 2008 crisis, it did not significantly ease austerity programs that were required for IMF loans, and stricter austerity was associated with greater income inequality and poverty in borrower countries, according to research by Boston University’s Global Development Policy Center.

Will this time be different? The IMF said it’s based its COVID-19 loans on expectations that countries will prioritize spending on issues like health, supporting the vulnerable, and climate change. To track that, Boston University’s research center created an index of the extent to which ongoing loan documentation continues to emphasize those policy steps; in Latin America, loans to 16 countries scored an average of 2.14 out of 3 on health, 2.31 on protecting the vulnerable, and 0.67 on climate.

Meanwhile, as the United Nations Economic Commission for Latin America and the Caribbean (ECLAC) reported in March, most countries in the region have committed themselves to fiscal consolidation in the near future. The IMF projects most Latin American countries will begin cutting their overall public spending beginning this year and continue to do so until at least 2026.

Aligning China with the Paris Club. Institutions like the IMF are only part of Latin America’s debt picture. On bilateral debt, China has agreed to cooperate with Paris Club creditors as part of a G-20 agreement to suspend debt for 73 low-income countries and build a common framework for debt restructuring—a departure from China’s usual style of negotiating debt relief apart from other creditors and with little transparency.

This could be an important step toward more transparency on Chinese loans. The issue was discussed on a recent episode of the China in Africa podcast, featured on FP’s own Foreign Policy Playlist, in which researcher Bradley Parks said his team was able to examine rarely seen Chinese loan contracts because some countries, such as Ecuador, had laws on the books requiring transparency. Parks praised such laws, noting other lenders beyond China also fall short on this topic.

Further steps. The details of all of the debt relief described above remain in flux, and together, they still fail to fully address sovereign debt pressures in Latin America. One more important measure on the horizon is the likely approval of $650 billion in IMF Special Drawing Rights, reserves that can be converted to currency. Additionally, World Bank chief economist Carmen Reinhart said on Tuesday she expects the G-20 framework for restructuring to be extended to middle-income countries.

Could this moment lead to even more ambitious reforms of the global financial safety net? Proposals abound, especially after policymakers saw how effectively the U.S. Federal Reserve used swap lines to prop up some central banks and economies at the pandemic’s start. (In Latin America, Mexico and Brazil benefited. In many countries that did not benefit, capital rushed out.)

For now, given existing responses to Latin America’s pandemic shock, ECLAC wrote in March that the region’s economic and social development is likely to be set back for at least a decade.

Chinese oil tax. Venezuela was recently blindsided by an announcement that China, the final buyer of most of Venezuela’s oil so Venezuela can skirt U.S. sanctions, will impose a $30 to $40 per barrel tax beginning June 12. Although China said the measure was based on environmental concerns, it could also be a sign of deteriorating relations between the two countries.

Peru’s polls. The final polls before Peru’s presidential runoff election this Sunday showed a very slight lead for left-wing candidate Pedro Castillo, though the gap between Castillo and his opponent Keiko Fujimori has narrowed over the course of the campaign. Fujimori was widely thought to have performed better in presidential debates.

Brazil takes the Cup. Argentina’s government made an 11th-hour decision to reject the hosting of the Copa América soccer tournament over COVID-19 concerns. The tournament found open arms in Brazil, where the pandemic is by no means under control and where the largest protests yet against Brazilian President Jair Bolsonaro’s administration occurred this weekend. 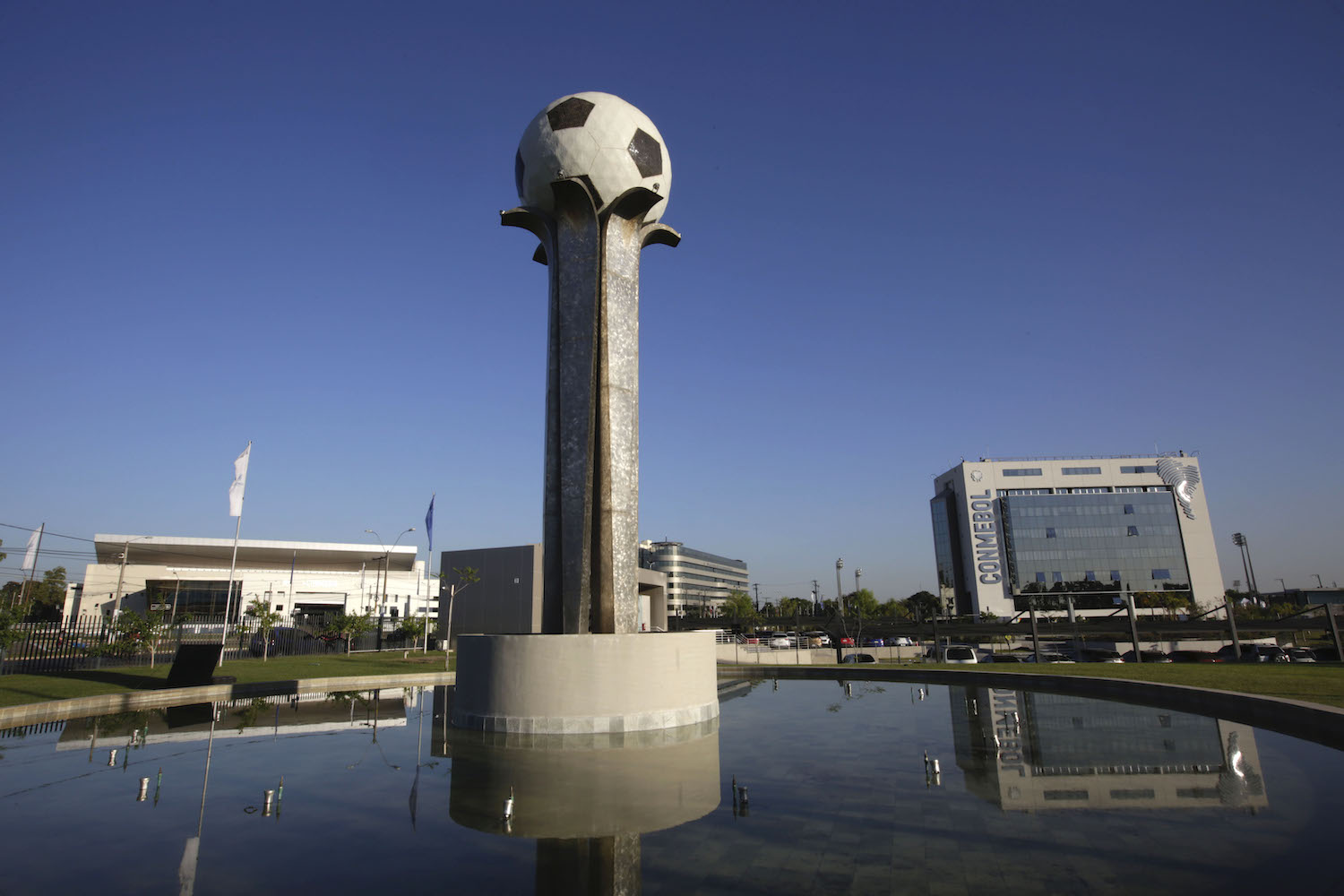 The headquarters of the South American Football Confederation is located in Luque, Paraguay on May 31.Luis Vera/Getty Images

Vogue in Bogotá. In light of a widely shared video of trans and nonbinary anti-government protesters vogueing in front of a line of riot police, the New York Times’s Sandra Garcia looked at how the dance style traveled from New York’s drag balls of the 1970s to the rest of the world. Modern ballroom culture is growing in Bogotá, said the protesters, including at the demonstrations themselves

When IMF Special Drawing Rights are issued, how are they allocated?

On Wednesday, Nicaraguan police entered the home of prominent opposition presidential candidate Cristiana Chamorro and placed her under house arrest, according to her brother. She was accused of money laundering among other charges, which she called a sham, to keep her from running. Nicaragua’s attorney general has asked she be banned from the election.

A creeping crackdown. The arrest came around two weeks after police raided Chamorro’s brother’s independent media outlet and is in the wake of new anti-democratic restrictions surrounding the November election. (Chamorro has a political family; her mother defeated Nicaraguan President Daniel Ortega in a 1990 election.) Nicaragua has mostly ignored calls from the Organization of American States (OAS) to implement meaningful electoral reform after its brutal repression of the 2018 protests that kicked off the current political crisis.

An international response? Most Latin American leaders did not say anything about the dramatic turn of events, symptomatic of the region’s fragmentation and lack of international engagement. Exceptions included condemnations from Costa Rica’s foreign ministry and from Venezuelan opposition figure Juan Guaidó. The OAS issued a statement of concern, and U.S. Secretary of State Antony Blinken denounced the ban on Chamorro’s candidacy in a tweet.

As Ortega beats back challenges inside Nicaragua, international pressure may be one of the few ways to get him to change course. Washington, for its part, has focused much of its Central America messaging around anti-corruption and promoting good governance but until now has mostly steered clear of Nicaragua. Its response to Ortega’s crackdown will show how exactly it plans to address democratic backsliding in the neighborhood.

B) By countries’ relative positions in the world economy

Special Drawing Rights (SDR) are allocated according to each country’s IMF quota, which is a weighted average of GDP, economic openness, economic variability, and international reserves. That means rich countries would receive the majority of new SDRs issued, which has prompted proposals and research, including from the fund itself, about the possibility of reallocating new SDRs to countries worst-affected by the COVID-19 shock.

NEW FOR SUBSCRIBERS: Want to read more on this topic or region? Click + to receive email alerts when new stories are published on Economics, South America

Technology transfers to produce shots are slowly underway in the region.