Nigeria’s Twitter Ban Has a Lesson for Big Tech

The social media company faces tough questions in talks with the government to restore access to 40 million users.

The highlights this week: Nigeria’s president enacts a Twitter ban after the company removes his tweet, acquitted former President Laurent Gbagbo plots his return to the Ivory Coast, and the death of a so-called prophet shows the power of Africa’s evangelical churches.

The highlights this week: Nigeria’s president enacts a Twitter ban after the company removes his tweet, acquitted former President Laurent Gbagbo plots his return to the Ivory Coast, and the death of a so-called prophet shows the power of Africa’s evangelical churches.

Last week, Twitter found itself on the wrong side of the Nigerian government when it removed a tweet by President Muhammadu Buhari sounding off on the country’s troubled security situation.

“Many of those misbehaving today are too young to be aware of the destruction and loss of lives that occurred during the Biafra war. Those of us in the fields for 30 months, who went through the war, will treat them in the language they understand,” Buhari wrote in the now-deleted tweet.

During the war between the federal government and the secessionist state of Biafra (1967-1970), a government blockade led to mass starvation. Buhari’s veiled threat aimed at today’s separatists in the south ran afoul of Twitter’s rules against abusive behavior.

In response to Twitter’s action, Buhari’s government banned the platform indefinitely, cutting off an estimated 40 million Nigerian users. Ironically, the Ministry of Information and Culture announced the decision in a Twitter thread. It also said all other social media operations and services, such as streaming and chat, must be licensed by the National Broadcasting Commission. Those who break the Twitter ban could face prosecution.

Twitter has long irked Buhari and his government, even though the president has an active account with 4.1 million followers. Last year, #EndSARS activists used Twitter to organize mass protests and raise awareness for their cause. After Twitter CEO Jack Dorsey tweeted in support of the movement, Buhari called for stricter regulation of the company.

Focusing on Twitter also provides a convenient distraction from Nigeria’s unraveling security situation. School kidnappings have spiked, with bandits moving in on the terrain of jihadist groups for ransom revenue. Pastoral violence continues in the north, as does violence over resources in the south.

Trip back in time. Nigerians are already using VPNs to get around the ban and bypass compliant telecommunications networks. For some citizens, the crackdown on freedom of speech recalls Buhari’s tenure as a military dictator in the mid-1980s, when his regime attacked the press and detained critics. His comments about the Biafra war, in which as many as 2 million people died but has yet to be fully reckoned with in contemporary Nigeria.

Digital authoritarianism. Nigeria’s extensive ban serves as a lesson for social media companies around the world. Although Twitter cited freedom of speech as a reason for choosing Accra, Ghana, over Lagos for its Africa headquarters, the proximity to Nigeria—Africa’s most populous country—was intentional.

As Torinmo Salau wrote in Foreign Policy last week, most of Twitter’s jobs in Accra were focused on building the business in Nigeria. (On June 5, Twitter expressed concern over the ban and pledged to “work to restore access” to Nigerian users.)

And as Kọ́lá Túbọ̀sún wrote in Foreign Policy this week, the Twitter ban foreshadows future hardships under Buhari. The president could use the move to further erode the rule of law and citizens’ rights, especially for the youth. Twitter is in talks with the federal government to restore service, raising questions about if the company will loosen its strict violation policies for Buhari.

The decision then lies with Twitter: Will it maintain its stance against policy violations—even by the president—or will it submit it to the anachronistic tactics of an increasingly repressive government?

Gbagbo returns to Ivory Coast. Former President Laurent Gbagbo, who ruled from 2000 to the 2010 civil war, plans to return to the Ivory Coast next week, following his acquittal for crimes against humanity at the International Criminal Court. Gbagbo’s planned arrival on June 17 was announced to crowds gathered in Abidjan, the capital, to celebrate his 76th birthday last week.

In 2011, Gbagbo became the first former head of state to stand trial at The Hague, on charges linked to his alleged role in stoking violence after the 2010 election. Despite his decade-long absence during his trial and subsequent appeal, Gbagbo remains a popular figure in Ivory Coast.

Incumbent President Alassane Ouattara, a formal rival of Gbagbo, said he is free to return, but it’s unclear if will face a sentence after he was convicted in absentia in 2019 for misappropriating funds. 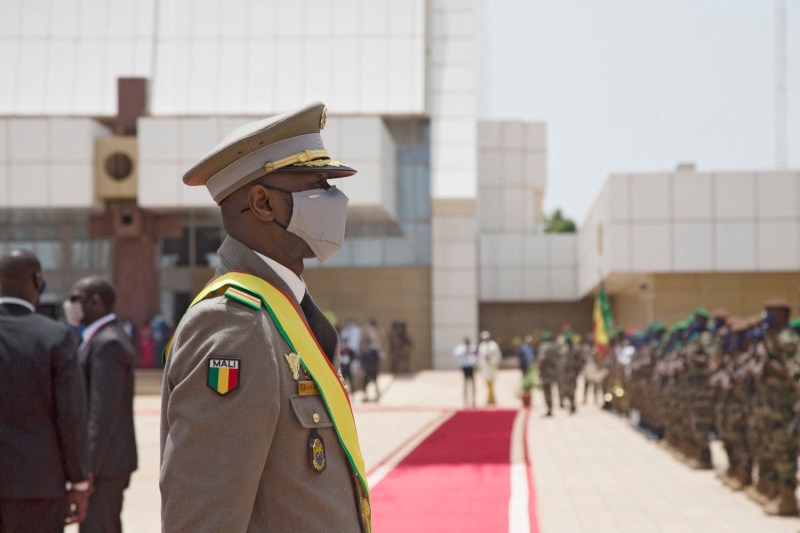 Mali’s coup leader sworn in. Despite regional sanctions and international condemnation, the colonel who initiated a coup in Mali last month was sworn in as interim president on Monday. Col. Assimi Goita took office on Monday, pledging to lead the government toward new elections. On May 24, military officers detained the president and prime minister of the previous transitional government, intended to lead Mali back to democracy after a coup last year.

Last week, the African Union and the West African bloc Ecowas both suspended Mali over the recent coup. France also halted military cooperation with Mali, which is part of the G-5 Sahel regional counterterrorism force, while the World Bank paused $1.5 billion in financing to Mali from the International Development Association.

The journalist’s detention comes after Mozambican President Filipe Nyusi visited Kigali, Rwanda, to discuss growing insecurity in northern Mozambique. A well-known critic of Rwandan President Paul Kagame, Ntamuhanga was the director of a fundamentalist Christian broadcaster. He was convicted on charges of conspiring against the state, terrorism, and murder in 2015 and was sentenced to 25 years in prison, before fleeing to Mozambique, which does not have an extradition treaty with Rwanda.

Angolan generals axed. In an ongoing effort to rid Angola of corruption, President João Lourenço fired the country’s security chief on May 31. Gen. Pedro Sebastião was the president’s minister of state security and intelligence during a financial scandal that rocked Lourenço’s office last month, when authorities reportedly seized millions of dollars, euros, and Angolan kwanzas from military officers accused of embezzlement.

South Africa’s unemployment rate in the first quarter of 2021 reached a staggering 32.6 percent. Among those under the age of 35, 46.3 percent were unemployed; among recent graduates, the rate was nearly 75 percent. South Africa’s expanded definition of unemployment includes those who are no longer searching for work. The coronavirus pandemic has exacerbated already-high rates of joblessness and economic decline.

Death of a prophet. One of Africa’s most prolific televangelists, self-proclaimed prophet TB Joshua, died suddenly on June 5, leaving his thousands of followers reeling. The Nigerian preacher was the founder and head of the evangelical Synagogue Church of All Nations, headquartered in Lagos with branches in Ghana, South Africa, and elsewhere. Joshua’s brand of prosperity gospel attracted a massive following that included politicians and celebrities. It also helped launch his successful television network, Emmanuel TV.

While Joshua’s followers mourn his charity, he will also be remembered for his prophecies. He is reported to have predicted economic woes for Nigeria in 2016, just before the country’s currency was devalued, and the death of Malawi’s President Bingu wa Mutharika in 2012. Joshua had some misses, too, including incorrectly foretelling Hillary Clinton’s victory in the 2016 U.S. presidential election. Earlier this year, YouTube banned his channel over claims that he could cure homosexuality.

Nonetheless, Joshua’s congregation only continued to grow across the continent, helping him amass an estimated fortune of up to $15 million—and illustrating the growing power of evangelical churches in Africa.

The problem and the solution. Nigeria’s military plays an outsize role in the country, taking on responsibilities that should go to the country’s police force—a legacy left over from years of military rule. In Foreign Policy, Nigerian historian and author Max Siollun argues that Nigeria’s military elite is also uniquely placed to change this pattern.

“Why say no?” Renowned Cameroonian postcolonial scholar Achille Mbembe invited criticism when he agreed to help French President Emmanuel Macron set up the France-Africa Summit later this year. Mbembe told Agence France-Presse that the summit would have a new structure that more adequately addressed Africans’ concerns, defending his decision as taking a risk to shift French-African relations.