Biden’s pledge to maintain U.S. capacity in Afghanistan without boots on the ground appears easier said than done.

For Counterterrorism, the U.S. Has Few Good Options

When U.S. President Joe Biden announced a full troop withdrawal from Afghanistan by Sept. 11, he said he planned to fight terrorism without boots on the ground. “We’ll reorganize our counterterrorism capabilities and the substantial assets in the region to prevent reemergence of terrorists,” he said in April. In recent days, it’s become clear that is easier said than done.

On Sunday, the New York Times reported that U.S. officials have held talks with Pakistan about using nearby Pakistani military bases for U.S. counterterrorism operations in Afghanistan. This option makes sense: Pakistan has the advantage of location and precedent. It previously granted base privileges to U.S. security personnel for listening posts during the Cold War and for drones in the post-9/11 era.

But anti-U.S. sentiment runs deep in Pakistan. The public strongly opposes basing arrangements for the United States. Prime Minister Imran Khan is a vocal opponent of U.S. drone strikes, and his government has taken a populist position on the question of U.S. basing—publicly rejecting the possibility of an agreement. According to the Times story, the U.S.-Pakistan talks have not gotten far.

A base deal isn’t impossible if the United States accepts Pakistani conditions, such as approving U.S. targets in Afghanistan, and offers additional incentives, such as the restoration of security assistance suspended in 2018. Any negotiations will be led by the Pakistani Army, which has a more sanguine view of military cooperation with Washington than the civilian leadership and has signed off on past basing agreements.

The political risks of a base accord could still be prohibitive. A secret agreement would likely be exposed eventually. Pakistan would also face pressure from its close ally China to avoid a deal. And U.S.-Pakistan counterterrorism cooperation has a mixed record. The countries have worked together successfully to apprehend al Qaeda leaders, but U.S. officials also believe Pakistan has tipped off militants in Afghanistan about impending raids.

Pakistan’s long-standing patronage of the Taliban, which still cooperate with al Qaeda, is a major tension point. Mistrust lingers, especially for Biden administration officials who directly experienced these tensions while serving in the Obama White House. Such sentiment could work against a new base deal.

Washington’s other options are also problematic. Tajikistan and Uzbekistan border Afghanistan and previously permitted U.S. military personnel on their soil—though only for refueling purposes in Tajikistan. If they host U.S. troops now, they face the unpalatable prospect of provoking Russia. Additionally, Tajikistan has fraught relations with Washington, and Uzbekistan has a law banning foreign troops on its territory.

India, the United States’ closest partner in South Asia, may look like an intriguing option. But despite deepening military cooperation with Washington, New Delhi avoids alliances and would likely oppose U.S. basing on its soil. India also doesn’t border Afghanistan. The most direct route to Afghanistan actually runs through Pakistan, which is unlikely to give overflight rights to U.S. military air assets—such as drones—that originate in India.

Finally, the United States has military facilities in the Persian Gulf, although their distance from Afghanistan would hamper surveillance and targeting. These facilities may just have to do. Speaking to the Senate Appropriations Defense Committee on June 8, acting Air Force Secretary John Roth said that existing U.S. bases will be used for “over-the-horizon” counterterrorism activities in Afghanistan for now.

Pursuing new intelligence-sharing accords with Pakistan and the Central Asian states is a more realistic option for the United States. And although other key regional players—including China, Russia, and Iran—are U.S. rivals, they all have strong reasons to curb transnational terrorist threats in Afghanistan. Washington has an opportunity to spearhead multilateral diplomacy focused around this shared interest.

But as long as U.S. negotiators struggle to secure new basing arrangements close to Afghanistan, its counterterrorism capacity will face constraints, and Biden’s assurances could ultimately ring hollow.

Tuesday, June 15: The anniversary of the deadly India-China border clash in Ladakh.

Train crash in Pakistan. A train crash in southern Pakistan on Monday killed nearly 60 people when one train derailed and slammed into another. Such tragedies are unfortunately familiar. According to official figures, at least 19 train crashes have killed nearly 350 people since 2013, including eight since 2018, when Khan’s government took office. Authorities typically cite poor track conditions as the main cause of crashes, including this week.

These accidents underscore the human costs of bad infrastructure, one of Pakistan’s biggest development challenges. They also show why Chinese railway projects, a major component of the Belt and Road Initiative, appeal to Pakistan. Last year, the government inked a $6.8 billion deal for China to upgrade Pakistan’s main rail lines, but the financing is still under negotiation.

India announces free COVID-19 vaccines. On Monday, Indian Prime Minister Narendra Modi announced that starting June 21, all Indians over the age of 18 can receive free COVID-19 vaccines in government vaccination centers. Only the elderly and front-line workers currently receive free vaccines. Vaccine costs have soared to as high as $20, a prohibitive fee for many people in India, where the per capita income is less than $2,000.

The government will begin procuring 75 percent of vaccines directly from manufacturers and giving them to states. The remaining 25 percent will go to the private sector, which may still charge a fee. However, under the new policy, private hospitals can no longer charge patients more than $2 as a service charge.

Access to free doses can potentially deliver a shot in the arm to India’s vaccination campaign. Even with nearly 3 million vaccines administered daily, just 3 percent of India’s population is fully vaccinated.

New Delhi reaches out to the Taliban. The Hindustan Times reported this week that Indian security officials have opened up communication channels with the Afghan Taliban, which are closely allied with Pakistan. The insurgents deny India reached out, but the Hindustan Times report suggests New Delhi is only engaging with factions seen as “nationalistic” and less close to Pakistan.

India’s calculus is likely driven by the realization that no matter what happens after the U.S. withdrawal from Afghanistan, the Taliban’s clout will increase. New Delhi is already a close partner of the Afghan government, and it could broaden its influence and connections in the country through building ties with the Afghan Taliban. 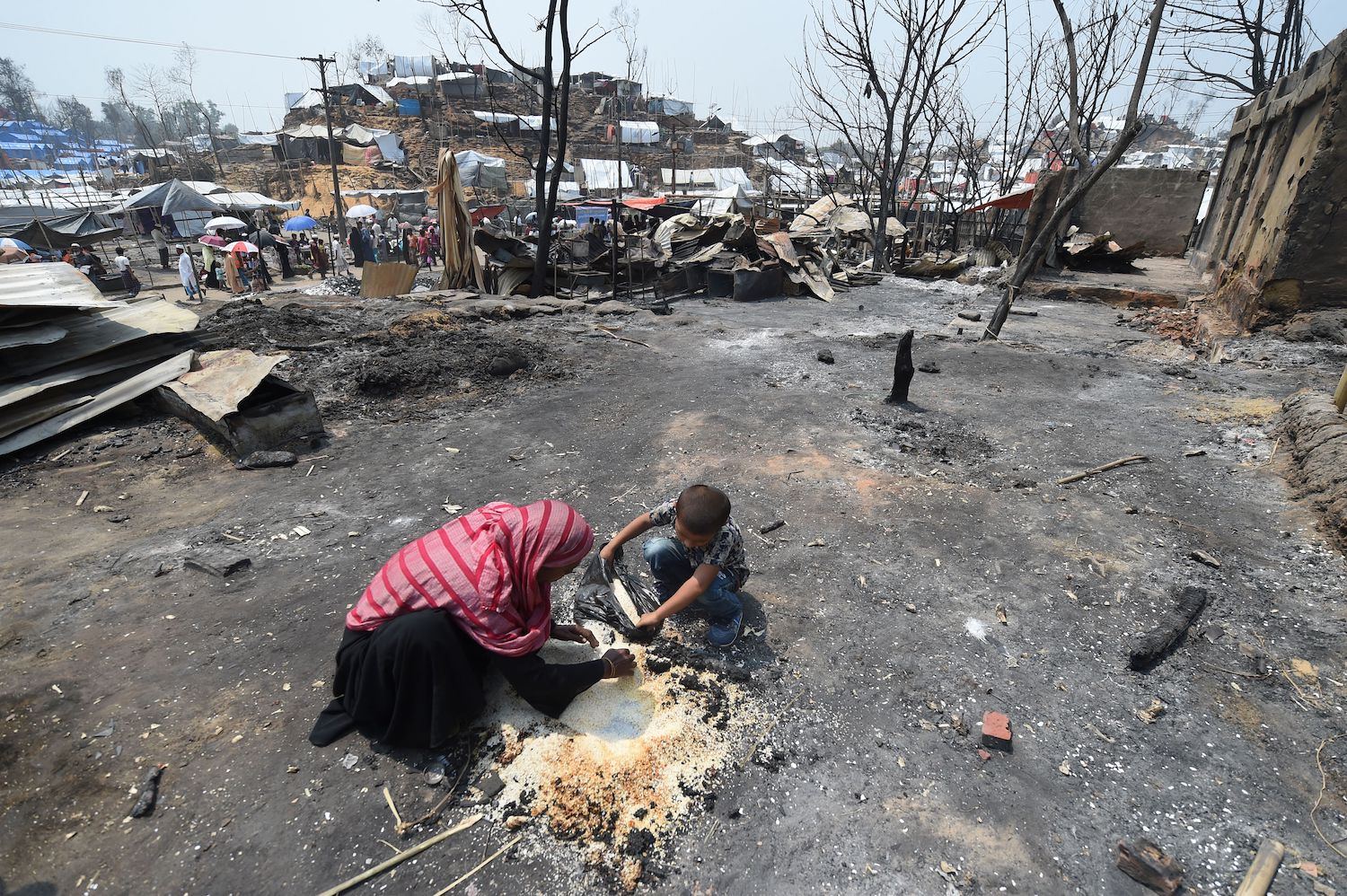 A Rohingya refugee family collects rice after a fire at a refugee camp in Ukhia, Cox’s Bazar, Bangladesh, on March 25.MUNIR UZ ZAMAN/AFP via Getty Images

Bangladesh’s monsoon season, which began this month, poses major risks to Rohingya refugees. Nearly 1 million Rohingya live in cramped conditions in the world’s largest refugee camp in Cox’s Bazar in southern Bangladesh, where many fled in 2017 to escape violence in neighboring Myanmar. The camp is also one of the most vulnerable to natural disasters. On Saturday, two refugees were killed in landslides after monsoon rains, and in March, a massive fire displaced 45,000 people.

The 20,000 Rohingya refugees who relocated last year from Cox’s Bazar to the flood-prone island of Bhasan Char are most at risk. A Human Rights Watch report, based on interviews with refugees on the island, finds that they lack “adequate health care, livelihoods, or protections.” Last week, several thousand refugees on Bhasan Char staged protests over their living conditions. Undeterred, Dhaka eventually plans to relocate 80,000 more people to the island.

“Like a frog that catches the fly despite being half swallowed by a snake, he is still engaging with such political gimmicks that tend to embarrass all alike.”

A new World Bank report edited by Mandakini Kaul and Nikita Singla includes case studies written by local residents on how people-to-people activities can help strengthen South Asian regional integration. The case studies range from music and menstruation to scholarship and trade. It’s an instructive read, given that South Asia is one of the world’s least integrated regions. “Regional cooperation is not easy,” Kaul and Singla write. “It requires vision. It also demands innovation, and above all, perseverance, to bring together people, businesses, and nations.”

In the Daily Star, development analyst Mohammed Norul Alam Raju warns that Bangladesh is vulnerable to a major earthquake. He urges the country, which has recently experienced minor temblors, to better prepare for potential disaster. “If it does strike, only the development of a culture of resilience can contribute to reducing the loss of lives and property,” he writes.

Yeshey Jamtsho, an urban planner for the Bhutanese government, writes in Kuensel about the challenges of urbanization in the country, which has an urban growth rate of 2.8 percent—one of the fastest in the region. He calls for better public transportation and more pedestrian-friendly infrastructure.

The Times of India diplomatic editor Indrani Bagchi describes the Quadrilateral Security Dialogue, or the Quad, as “at the core of the new global geopolitics.” But she notes that the Quad’s increasing global influence presents its member India with a “complex web of foreign policy moves” related to Russia and China, both Quad opponents.

Is Biden Missing a Chance to Engage China?

Is Biden Missing a Chance to Engage China?