We would tell you, but it’s classified.

Welcome to SitRep! Robbie is jet setting off to vacation later today, so Jack will be riding solo on SitRep next week.

Alright, here’s what’s on tap for the day: The Biden administration clams up on China policy, the president takes off for Europe, and we speed-read through the wonkiest papers in Washington.

Welcome to SitRep! Robbie is jet setting off to vacation later today, so Jack will be riding solo on SitRep next week.

Alright, here’s what’s on tap for the day: The Biden administration clams up on China policy, the president takes off for Europe, and we speed-read through the wonkiest papers in Washington.

All Quiet on the Eastern Front

At least that’s how it felt to the dingy Zoom room full of reporters who logged on to speak to a so-called “senior defense official” who proceeded to say … nothing of substance on the Pentagon’s pivot to Asia. Well, almost nothing.

What we know. The China review panel, which will feed into the Pentagon’s forthcoming recommendations to move U.S. troops around the map, calls for the agency to update education for military officers and professional development for civilians to align with the China challenge.

It will also provide Colin Kahl, the Pentagon’s newly minted top policy official, with advice on how to deter China and long-term competition. And it calls for U.S. Defense Secretary Lloyd Austin to weigh in on the new warfighting strategy that’s coming from the Joint Chiefs.

What we don’t know. The Pentagon isn’t saying anything about most of the specific requests the task force had for Austin or whether it calls for moving U.S. troops to Asia at the expense of the Middle East. And they’re not saying what’s in Austin’s directive to the Defense Department on China, which also remains classified. All of that is attributable to a senior defense official, who the Pentagon said could not be identified to discuss “sensitive deliberations.”

Talk is cheap. Defense officials acknowledged there’s been a “say-do gap” between the agency talking up the China threat and actually doing anything about it. The senior defense official who spoke to reporters said the most important thing about the China review, a “down and in” look at the Pentagon’s programs (agency jargon for “navel gazing”), was righting the ship after two decades of warfare in the Middle East.

“The emphasis on the say-do gap and overhauling operational concepts and posture suggests that they’re focused on the right problems,” said Elbridge Colby, a former deputy assistant secretary of defense during the Trump administration and an architect of the 2018 National Defense Strategy (and clearly a master of Pentagon-speak).

So far, not so good. But the Pentagon is getting chewed out on Capitol Hill by lawmakers who are upset the administration’s $715 billion budget request isn’t doing enough to stick the U.S. military’s pivot foot down in Asia.

Senate Armed Services Committee Chair Jack Reed of Rhode Island was the latest lawmaker to join the pile-on during a Thursday hearing featuring Austin and other top defense leaders. “I am concerned that the department’s budget request takes a heavily platform-centric approach to [the Pacific Deterrence Initiative],” Reed said in his opening remarks.

And inside the Pentagon, the battle over whether to base more U.S. troops within striking distance of China’s powerful missiles and rockets has raged for months, if not years.

Still, it’s about the planning, not the plan. Jacob Stokes, a fellow at the Center for a New American Security and former national security staffer for Biden during the Obama administration, said the policy review document is important just for corralling the Pentagon’s sprawling bureaucracy to start marching in step on China.

“It’s not about necessarily the document that comes out at the end; it’s about the process of every office throughout the bureaucracy sitting down and asking themselves how does our work fit into this priority,” Stokes said.

“The overall signal is this review shows that Secretary Austin intends to infuse the China challenge throughout almost everything the department does,” he added.

Biden is mulling plans to tap Daniel Shapiro, former U.S. ambassador to Israel, to be a special envoy for Middle East peace talks, according to the Washington Post.

Biden also announced three new nominees for senior State Department and U.S. Agency for International Development (USAID) posts, as we scooped: career diplomat Julieta Valls Noyes to be assistant secretary of state for population, refugees, and migration; Paloma Adams-Allen to be deputy USAID administrator for management and resources; and Isobel Coleman to be USAID’s deputy administrator for policy and programming.

Still missing in action. Ahead of Biden’s big trip to Europe, he has yet to announce nominees for his ambassador to the European Union, NATO, United Kingdom, France, and Germany (among many other empty ambassador posts).

All disquiet on the Western front. The NATO summit in Brussels this week is all about showcasing alliance solidarity after four years under former U.S. President Donald Trump. But it’s not clear whether NATO is able to actually pull off that grand showcase of political unity that both European and U.S. diplomats so desperately crave in the post-Trump era, as Robbie reported.

Iran talks back on the menu. Deputy Secretary of State Wendy Sherman said negotiations between world powers and Iran over its nuclear program are starting back up this weekend. Diplomacy is easier said than done this time around though, particularly ahead of Iran’s presidential elections later this month, where a hard-liner is expected to replace Iranian President Hassan Rouhani.

Downsizing. France is expected to announce a reduction in the number of troops it has deployed in Mali as international counterterrorism efforts in the Sahel region of Africa have, to put it mildly, not turned into the stunning success Western officials hoped it would be.

The announcement came shortly after a second coup in Mali within a year and another quasi-coup (depending on who you ask) in Chad. France and the United States relied heavily on regional military forces, particularly Chad’s, to help their counterterrorism operations but have been hampered by those governments’ chronic political instability.

Heading off the next pandemic. Ahead of a G-7 summit this week, British Prime Minister Boris Johnson has called for establishing a “Global Pandemic Radar”—a new early warning system with a network of surveillance centers to prevent future pandemics.

Time to Cut Down on Carb(on)s

Read this deep dive on the global energy future and the long road to clean energy transitions, from our colleagues at Foreign Policy Analytics. 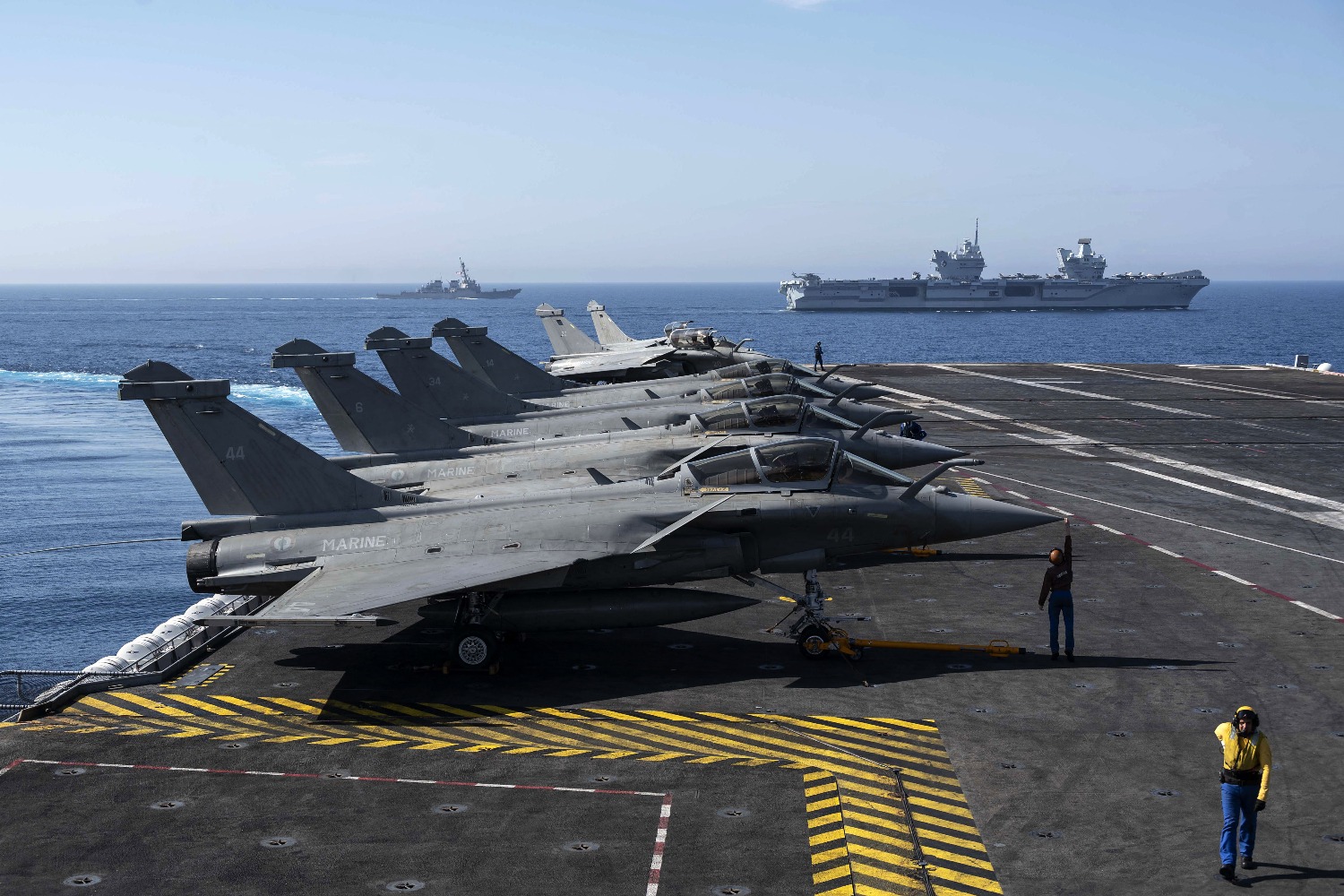 French Navy Rafale jet fighters sit on the bridge of the French aircraft carrier Charles de Gaulle with the U.K. Royal Navy’s aircraft carrier HMS Queen Elizabeth in the background during the Navy exercise “Gallic strike” off the coast of Toulon, France, on June 3.Christophe Simon/AFP via Getty Images

“I do not understand what the Americans want from China. If anyone understands, they should explain it to me. China isn’t against us and is not our enemy.”

—Former Israeli spy chief Yossi Cohen, in a speech that could raise some eyebrows in Washington

Monday, June 14: Biden is set to meet with his Turkish counterpart, Recep Tayyip Erdogan, on the sidelines of the NATO summit in Brussels, the first in-person meeting between the erstwhile allies since Biden took office.

There were a lot of really great reads that we stumbled on this week. So here’s a weekend reading list we curated, tailor-made for the wonkiest of national security wonks:

China’s military might: A new Congressional Research Service (CRS) report, from CRS analyst Caitlin Campbell, gives the best one-stop-shop rundown on China’s military we’ve seen so far, including everything from its nuclear arsenal to defense budget to its naval modernization plans.

China’s designs in Africa: Nadège Rolland of the National Bureau of Asian Research has written a lengthy new report on how China views its engagement with Africa, which has gotten a lot of attention in the West but little analysis from China’s point of view.

So you’re saying climate change does exist, then? Republican Rep. Louie Gohmert suggested altering the moon’s orbit to combat climate change during a congressional hearing, according to NBC News.

Update on our robot overlords. Army scientists are researching whether multilegged robots are as efficient as their wheeled counterparts by studying the movement of tanks … and cockroaches, according to the Army Times.

NEW FOR SUBSCRIBERS: Want to read more on this topic or region? Click + to receive email alerts when new stories are published on Security, United States, China

How Biden Became a Nationalist by Necessity

How Biden Became a Nationalist by Necessity