With cancellation so prominent in Japan’s Olympic history, Tokyo 2021 has emerged as a cautionary tale.

By David Clay Large, a senior fellow with the Institute of European Studies at the University of California, Berkeley.
June 11, 2021, 6:00 AM

“The games must go on!” insisted Avery Brundage, then-president of the International Olympic Committee (IOC), at a hastily arranged memorial service for 11 Israeli Olympians and coaches murdered by Palestinian terrorists at the Munich Summer Games in 1972. As we know, those games did go on, despite fervent pleas for their cancellation from around the world. “It’s like dancing on Dachau!” opined a reporter for the Los Angeles Times.

Fast forward nearly 50 years to today’s controversy surrounding the Tokyo Summer Games, originally scheduled for 2020 but postponed for a year because of the raging COVID-19 pandemic. Of course, the issue this time couldn’t be more different from Munich ‘72: prudent public health as opposed to proper public grieving. But much like Brundage, current IOC President Thomas Bach is committed to seeing the Tokyo Games go forward no matter what, even amid ongoing calls for another postponement or even an outright cancellation. In Japan, meanwhile, the controversy comes with an entirely different historical association: another case where Summer Games planned for Tokyo were canceled.

Advocates for postponement or cancellation point out that, with respect to COVID-19, Japan is no better off now than it was a year ago. Although the country has managed to avoid the truly horrific infection spikes and death rates seen in some other parts of the world, more than two-thirds of Japan’s COVID-19 fatalities have come in 2021 alone. Vaccinations are proceeding very slowly, with less than 5 percent of residents having received their first inoculation. This puts Japan dead last among major developed nations in the global campaign to get shots in arms. Reacting to increased case counts across the country in recent weeks, Japanese health officials expanded state-of-emergency decrees from six prefectures, including Tokyo, to nine. Newly added were Hokkaido, where the marathon is scheduled to be run, and Hiroshima, where on May 10, the Olympic torch relay—that gift to the modern Olympics from Nazi organizers in 1936—had to be pulled off the streets due to a local infection surge.

Meanwhile, the U.S. State Department has issued an advisory instructing Americans not to travel to Japan given the ominous uptick in COVID-19 cases just six weeks before the games are set to begin. As if to add yet more insult to all this injury, a number of well-known athletes have expressed reservations about competing in Tokyo: Potential no-shows from the world of tennis alone include Spain’s Rafael Nadal, the United States’ Serena Williams, and Japan’s Kei Nishikori and Naomi Osaka. Most ominously, recent opinion polls have shown a large part of the Japanese population favors either putting off the games (again) or canceling altogether a potential superspreader athletic extravaganza. 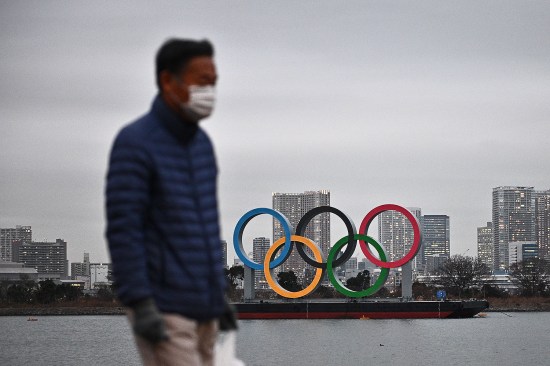 A man walks past the Olympic rings on display at the Odaiba waterfront in Tokyo on Jan. 15. PHILIP FONG/AFP via Getty Images

Nevertheless, along with the IOC, Tokyo’s Olympic Organising Committee and the Japanese government under Prime Minister Yoshihide Suga are determined to go ahead with this risky adventure, even if it means imposing a ban on spectators from overseas—which is exactly what has now been decided. Some previous Olympic festivals, most memorably Athens 2004, were embarrassingly short on spectators from abroad, primarily because many were afraid to visit a venue considered highly vulnerable to terrorism. (It was the first Summer Games after the Sept. 11 attacks.) Tokyo 2021, by contrast, won’t let the foreign hordes show up even if they wanted to.

So why persist with throwing a live party when liveliness is not likely to be much in evidence, at least in terms of international spectators? The usual suspects—money and politics—account for the organizers’ determination to go on with this show; lack of foreign guests be damned. When it comes to money, the IOC no longer needs to fill Olympic stadiums with warm bodies because the lion’s share of its revenue comes from the sale of TV broadcast rights and exclusive corporate sponsorship deals under the so-called Total Olympic Program. Globally, the IOC generated some $4.5 billion from the combined sale of broadcast rights to the 2018 PyeongChang Winter Games and Tokyo 2020. Back in 2014, the committee squeezed a whopping $7.75 billion from NBC Universal for the U.S. rights to six Olympics from 2022 to 2032. Meanwhile, for Tokyo 2020, the IOC has raised $3.1 billion from Japanese companies alone, making these the most heavily sponsored Olympics ever. To keep the Olympic show on the road in the opulent manner its functionaries have become accustomed to, the IOC needs to keep these revenue streams flowing fast and furiously. For their part, the Japanese businesspeople who have committed so heavily to this enterprise are naturally anxious to see a healthy return on their investments. Japan’s political elite also has much at stake: Having taken control of the national government from the scandal-ridden administration of former Prime Minster Shinzo Abe, and having added some scandals of his own, Suga believes going ahead with the games, however controversial, will bolster his sagging popularity.

Given the prominent role corporate money and politics have long played in the modern Olympic movement, the fact that these forces have again raised their hoary heads is hardly unusual. But Tokyo and Japan also have their own special reasons to bring this festival to fruition even under diminished circumstances. If Tokyo were to walk away from the games, it would be the only host city in modern Olympic history to go down this route twice. Moreover, the Japanese capital would be sacrificing—for a second time—a golden opportunity to show the world how brilliantly it has come back after a debilitating natural disaster. The first instance was the Great Kanto Earthquake of 1923, which devastated Tokyo, Yokohama, and the surrounding prefectures, and the second was the 2011 Tohoku earthquake and Fukushima nuclear reactor meltdown. Tokyo, one might say, has been snakebitten in its history with the games, and getting bit twice is not a distinction much coveted by residents. 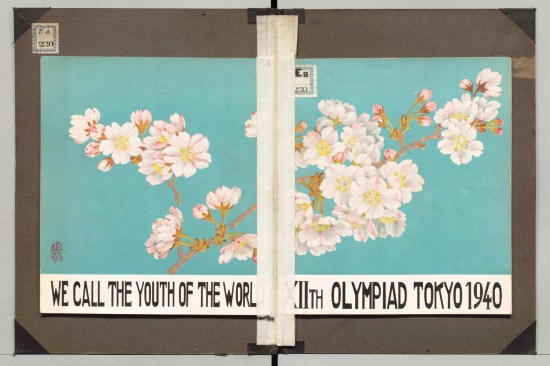 This “Olympic Preparations” guide was published in 1938 by the Organizing Committee of the 1940 Tokyo Olympics. The guide was featured in the digital exhibition “Kaleidoscope of Books (15) The Lost Tokyo Olympics in 1940.” Japan’s National Diet Library Digital Collections

Located near the new $1.4 billion National Stadium in Tokyo is the Japan Olympic Museum, which includes a small exhibition dedicated to an Olympic festival that never happened at all and which most non-Japanese are clueless about: the 1940 Tokyo Summer Olympics. It is these non-games that add an intriguing dimension to the drama now unfolding over Tokyo 2021.

The story behind Tokyo’s winning bid for the 1940 Summer Games is itself instructive. By the third decade of the 20th century, the IOC was hoping to broaden its market beyond Europe and North America. At that time, Japan offered the most obvious prospect for expansion: That country, after all, had contributed to the Allied victory over the Central Powers in World War I, and its vibrant capital was unquestionably the most dynamic non-Western metropolis on the planet. Moreover, Tokyo itself clearly wanted to take on the demanding challenge of hosting what had become the world’s premier athletic spectacle. In addition to helping spur a post-Kanto infrastructure and economic revival, the timing of the 1940 Games within the sweeping context of Japanese imperial history could allow for a major bout of nationalistic chest-thumping. Conveniently, imperial court scholars deduced the year 1940 coincided exactly with the 2,600th anniversary of the supposed enthronement of Japan’s legendary first emperor, Jimmu.

Demonstrating a precocious understanding of Olympic venue-bidding folkways, Tokyo’s 1940 boosters treated then-IOC President Henri de Baillet-Latour to an all-expenses-paid, 20-day “inspection” tour of their city’s prospective competition sites and fabled cultural attractions. Even more adroitly, when Tokyo realized Rome still held the inside track to the 1940 Games, its IOC delegate embarked on a personal mission to Italian dictator Benito Mussolini, promising him if he withdrew his city from that year’s candidate pool, Japan would back the Italian capital for the Summer Games of 1944. Aware that Rome wouldn’t be ready for 1940 anyway, Mussolini agreed to this backroom deal. Helsinki briefly kept a rival bid of its own on the table for 1940, but Baillet-Latour, full of memories of his sake-soaked time in Tokyo, pushed strongly for that city. Tokyo’s official designation as the 1940 host came at an IOC meeting during the 1936 Berlin Olympics. 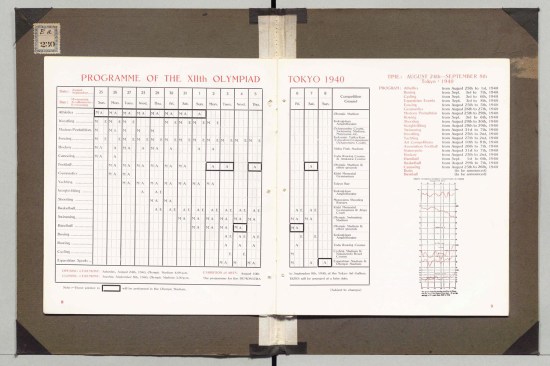 This schedule of events was printed in the “Olympic Preparations” guide by the Organizing Committee of the 1940 Tokyo Olympics. Japan’s National Diet Library Digital Collections

The charged setting for announcing Tokyo as the victorious venue seems historically fitting. By this juncture, power in Japan had shifted from a liberal modernizing faction to a cabal of arch-conservative imperialists with close ties to the military. Certainly, the IOC’s nod to militaristic Tokyo for 1940 harmonized well with its determination to hold fast to its original 1932 decision for Berlin despite Adolf Hitler’s coming to power a year later. Early on, the Japanese militarists had been no more enthusiastic about hosting an international, multiracial celebration of peaceful sport than Hitler and his followers had been when they inherited the games in 1933. Yet also like Hitler and the Nazis, Japan’s ambitious new leadership came to believe the games could be an economic windfall as well as a propaganda tool to dampen negative images of Japan following that nation’s conquest of Manchuria in 1932 and subsequent withdrawal from the League of Nations.

In the end, however, it was not international opprobrium toward Japan or occasional second thoughts by the IOC that doomed what would have been the Olympic Summer Games in Tokyo. In 1938, Japan’s leaders themselves pulled the plug when it became clear that hosting the 1940 Games would detract from their campaign to conquer the rest of China, which they had set out to do in 1937. Just as Nazi Schutzstaffel (SS) chief Heinrich Himmler proposed turning the modern Olympic movement into an SS project once Germany won World War II, the Japanese promised to revisit the prospect of hosting the Olympics once they had East Asia well in its grip. Meanwhile, Helsinki briefly jumped back into the 1940 breach created by Tokyo’s withdrawal, but the calamity of World War II quickly put paid to the Finnish option—just as it would the subsequent non-Olympiad of 1944, for which London had been picked in 1939. Fighting to the death obviated any need for substitute battling on Olympic fields of play.

With the issue of cancellation so prominent in Japan’s history with the Olympic Games, Tokyo 2021 has understandably emerged as a cautionary tale for other potential Olympic hosts. Already, fewer major cities are lining up to bid for a prize that often turns out to be a poisoned chalice. Indeed, spoilsports like this author are increasingly wondering if now might be a good time not merely to write off the snakebitten festival about to take place this summer but seize the opportunity and strike for good the bloated, five-ringed traveling circus known as the modern Olympic Games.

David Clay Large is a senior fellow with the Institute of European Studies at the University of California, Berkeley. Among his many books are Nazi Games: The Olympics of 1936; Munich 1972: Tragedy, Terror, and Triumph at the Olympic Games; and, most recently, The Grand Spas of Central Europe: A History of Intrigue, Politics, Art, and Healing.

As the Clock Ticks, Japanese Wonder If the Olympics Are Worth the Risk

Opponents are calling foul, but the data suggests the event can be pulled off.

The Japanese government is locked into what critics call a misguided project.

The 2008 games were supposed to help liberalize China. Instead the party learned it could get away with anything.