The latest G-7 summit shows Biden could be more successful than Trump in courting allies to counter Beijing.

The highlights this week: The G-7 summit shows some U.S. allies could get on board to counter China, Beijing admits damage to a reactor after an alert at a nuclear power plant, and the U.S. Defense Department plans a new task force in the Asia-Pacific.

The highlights this week: The G-7 summit shows some U.S. allies could get on board to counter China, Beijing admits damage to a reactor after an alert at a nuclear power plant, and the U.S. Defense Department plans a new task force in the Asia-Pacific.

The G-7 summit that concluded this week produced a communiqué that was unusually strong on China, including planned action on forced labor in Xinjiang. U.S. President Joe Biden has already been more successful than his predecessor in getting allies on board against China, driven in part by his popularity overseas. The United States and the European Union have wrapped up previous disputes on the sidelines and turned to the challenges China poses.

China’s own actions have also given a leg up to U.S. efforts, especially the sanctions imposed on European lawmakers and researchers in March. That move prompted massive pushback from Europe, including the suspension of an investment treaty eight years in the making. Although many European countries have been rethinking ties with China, it’s unclear if that will translate into concrete and unified action.

The Chinese reaction to the G-7 meeting was predictably cross and will probably lead to a doubling down on anti-foreign measures, not further diplomacy. Officially sanctioned xenophobia means there is little space for Chinese diplomats or academics who disapprove of an aggressive approach to maneuver.

Meanwhile, a law on foreign sanctions passed last Thursday creates a “countermeasures list” that covers institutions and individuals Beijing blames for sanctions. That leaves firms exposed in China if they have any dealings with those included on the list. For firms that have tried to walk a line between dealing with both the U.S. and Chinese governments, their choices are narrowing dramatically.

Of course, Europe is a big place, and not everyone supports U.S. efforts to counter China. Greece has stated it will continue seeking Chinese investments. Hungary is edging closer to Beijing, recently backing the opening of Fudan University’s satellite campus in Budapest. The decision is particularly significant given Hungarian Prime Minister Viktor Orban’s efforts to drive out the respected Central European University as part of its antisemitic campaign against funder George Soros.

Hungary’s opposition, united against Orban ahead of next year’s elections, has turned the deal with China into a campaign issue.

Nuclear reactor damage. China’s National Nuclear Safety Administration has admitted fuel rod damage at a nuclear power plant in the southeast but said there is no sign of a radiation leak from the reactor in question. The two French companies that operate the Taishan Nuclear Power Plant took the unusual step of directly alerting the United States last week, before China had admitted any problem.

The move is likely to cause the companies some political issues in China in the long term, but it also indicates how serious the damage could have been—and the lack of trust in Chinese regulators. Nuclear safety experts have long had concerns about China’s rush to build new power plants.

Crackdown on history. A leading article in a Chinese Communist Party (CCP) journal by Chinese President Xi Jinping calls for a “correct view” on the study of history in the runup to the 100th anniversary of the party’s founding next month. What the CCP actually means by studying history is erasing it—ruling out any facts that complicate the narrative of its complete triumph.

That stance has tightened under Xi. Even the Maoist-era government’s ability to admit mistakes is diminishing. New laws on so-called historical nihilism punish those who challenge propaganda fantasies.

Task Force China. The U.S. Defense Department is planning a new task force in the Asia-Pacific to specifically counter China. It mostly seems intended to clarify funding issues, although it would also bolster existing U.S. Navy forces in the Western Pacific. The task force also signals the seriousness of commitments to certain allies, including stalwarts like Japan and more conflicted countries like the Philippines.

Hong Kong laws tighten again. Each week, new regulations bring Hong Kong closer to mainland law. The territory’s supposed legal independence, which is supposed to continue until 2047 according to Hong Kong’s Basic Law and the deal arranged with the United Kingdom, is rapidly becoming fiction.

New film censorship rules now threaten a once thriving and innovative industry—the kind of move that would have caused mass protests before the draconian national security law introduced last year. In a less noticed change, the city has introduced real-name subscriber identification module (SIM) card registration, a key move used to limit online speech and monitor dissidents in China. The erosion of the rule of law is one reason foreign companies are making plans to leave Hong Kong.

Businesses don’t necessarily care about democracy, but they do care about stability and legal protections.

Botched FBI case. One of the first cases to come to court under the U.S. Justice Department’s China Initiative, which began in 2018, could confirm fears the program is an excuse for the persecution of ethnically Chinese scientists.

As the FBI admitted in court, it spent two years building an espionage case against University of Tennessee professor Anming Hu, including misrepresenting him to his bosses as a Chinese military operative and putting him on the federal no-fly list without evidence. The final case is an inflated fraud charge based on Hu’s failure to mention a part-time summer teaching gig in China on forms when the National Aeronautics and Space Administration approached him about a project.

Some U.S.-based researchers did effectively work for both the Chinese and U.S. governments under efforts such as China’s Thousand Talents program, and some appear to have deliberately omitted information about receiving Chinese funds when applying for U.S. grants, leading to tighter standards. But Hu’s isn’t the first case to fall apart. The FBI’s own lack of diversity, especially its underrepresentation of Asian Americans, doesn’t help.

Evergrande woes. Evergrande, China’s second largest property group, continued fluctuating this week after stocks crashed following a Caixin report saying the firm was in talks with local government over a considerable dilution of the company’s share in a troubled bank. Evergrande’s stock soared in 2017, making its founder one of China’s richest people, but the company’s viability has raised concerns since then.

Regulators have warned bad debt and real estate bubbles could cause problems this year as pandemic relief measures ease. 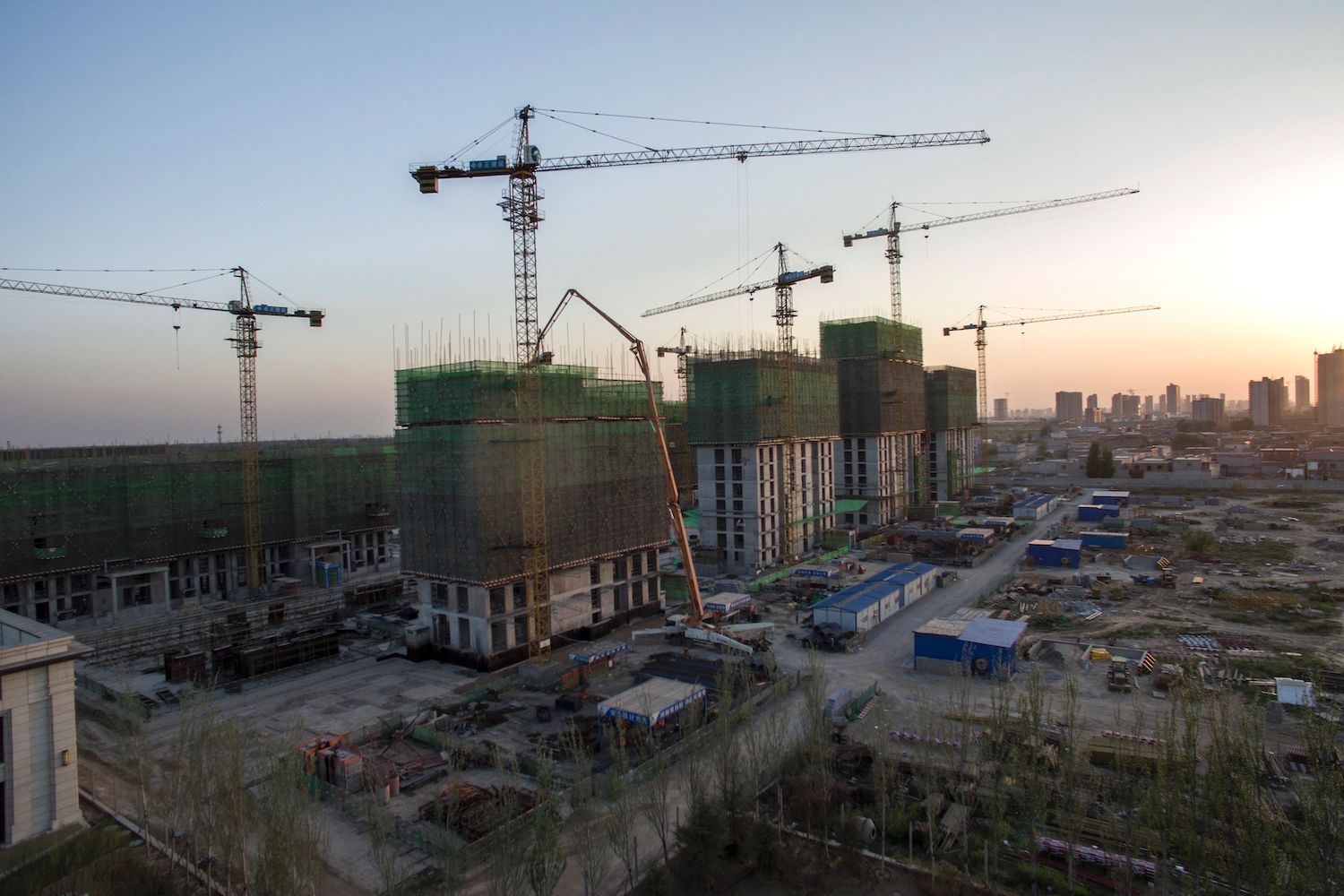 A construction site is pictured in Baoding, China, on April 25, 2017. FRED DUFOUR/AFP via Getty Images

Baoding lives in the shadow of other cities: The mighty trifecta of Beijing, Tianjin, and Shijiazhuang now dwarf the former capital of Hebei province, which has a population of around 2 million people with 10.4 million people in its greater administrative area. Even Baoding’s name means “protect the capital,” a reference to the days of the Yuan dynasty when it was built as a military base to shield Beijing.

In 1966, Baoding became the Hebei capital after Tianjin became a separate metropolitan area, but it lost the title to Shijiazhuang just two years later due to a combination of national politics, in which Shijiazhuang’s claim was supported by then-ascendant leftists, and the intensity of street fighting in Baoding during the Cultural Revolution.

The worst period of Cultural Revolution violence was between 1966 and 1969, but fighting in Baoding continued sporadically until 1976. One trigger was anti-religious persecution: The city’s Catholic cathedral was attacked, and nuns and priests were killed.

Baoding has a long Catholic tradition and remains a center of the underground church as well as the government-sanctioned branch of the faith. A Marian shrine at Donglu, a village inside the Baoding administrative area, was the site of a famous manifestation of the Virgin Mary in 1900 during the Boxer Rebellion, when Christian sites were targets of anti-foreign feeling.

NEW FOR SUBSCRIBERS: Want to read more on this topic or region? Click + to receive email alerts when new stories are published on Foreign & Public Diplomacy, China, Europe

As India and China Compete, Smaller States Are Cashing In

As India and China Compete, Smaller States Are Cashing In