Acquitted at the International Criminal Court, former President Laurent Gbagbo could play a role in the current government.

The highlights this week: Former President Laurent Gbagbo’s return to Ivory Coast raises questions about his political future, Ethiopia gears up for troubled elections, and why Apple’s new privacy laws won’t extend to some African states.

The highlights this week: Former President Laurent Gbagbo’s return to Ivory Coast raises questions about his political future, Ethiopia gears up for troubled elections, and why Apple’s new privacy laws won’t extend to some African states.

Former Ivory Coast President Laurent Gbagbo plans to return from Brussels to the commercial capital Abidjan on June 17 after a decadelong absence while on trial at The Hague.

On March 31, the Appeals Chamber of the International Criminal Court upheld Gbagbo’s 2019 acquittal for crimes against humanity. Gbagbo had been charged for his role in allegedly inciting post-election violence and civil war between December 2010 and April 2011, in which around 3,000 people were killed.

Gbagbo was the first head of state to stand trial at The Hague, and he maintained his innocence and his support back home throughout his time away. Gbagbo’s party, the Ivorian Popular Front, has created a welcome committee for his arrival. Despite his long absence, the 76-year-old former leader seems poised to step right back into politics.

Old rivalry. Current President Alassane Ouattara is among those anxiously anticipating Gbagbo’s return. According to the Africa Report, Ouattara was not surprised by the acquittal and is prepared for the return of his political foe.

The two politicians—whose political rivalry ultimately led to war—have not spoken, but their emissaries have reportedly traveled between Ivory Coast and Gbagbo’s residence in Brussels. Ouattara’s public comments indicate the tone of those discussions: Ouattara envisions Gbagbo returning to play a role in national reconciliation, although the details remain unclear.

But some Gbagbo supporters worry Ouattara could use a November 2019 conviction in absentia (for misappropriating funds from the central bank) to curtail the former president’s political ambitions. For example, Ouattara could dangle a presidential pardon in front of Gbagbo to ensure that he doesn’t whip up his still considerable support base against the current president.

Ouattara has used the last decade to consolidate his power, winning a landslide victory after seeking a third term last year, but he still has reason to fear his base fracturing.

Peacemaker? Some analysts hope Gbagbo will use his political clout in Ivory Coast to help the country heal from old wounds. A gifted orator whose socialist leanings attracted the disenfranchised, Gbagbo could use his influence to finally bring reconciliation. The 2010-2011 conflict divided the country along party lines when Gbagbo refused to cede power to Ouattara, leading to civil war.

Some others fear his return could deepen existing divisions. “The wounds are still open … and the authorities are worried that Gbagbo will stir up the crowds again, which is one of his hallmarks,” International Crisis Group researcher Rinaldo Depagne told Radio France Internationale.

Nothing new. For Ivory Coast citizens, Gbagbo’s return just continues a political legacy that has consolidated power among a few elites for decades. Actors such as Gbagbo, Ouattara, and former President Henri Konan Bédié still dominate the political landscape—as rivals or allies, depending on the climate.

Bédié, for example, has at different times been allied to Ouattara and Gbagbo. The latter may have entered politics as an outsider challenging this establishment, but he has become part of its architecture.

The trio ultimately represent a lack of real change in Ivory Coast, where the leadership is increasingly distant from its young population. Gbagbo’s return will likely be triumphant, but it won’t change much.

Wednesday, June 16: The world marks the Day of the African Child, which honors the victims of the 1976 Soweto massacre of Black schoolchildren in apartheid-era South Africa.

Friday, June 18: A Swiss court rules on charges against Liberian warlord Alieu Kosiah, for alleged war crimes committed between 1993 and 1996. 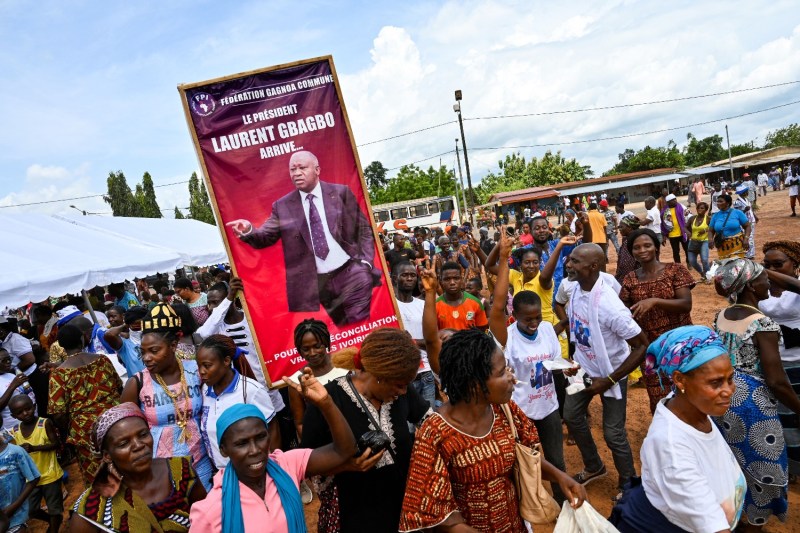 Supporters of the Ivorian Popular Front rally before the reception of former Ivory Coast President Laurent Gbagbo in his hometown of Mama, Ivory Coast, on June 13.SIA KAMBOU/AFP via Getty Images

Ethiopia’s troubled elections. Ethiopia is forging ahead with national and regional elections on June 21, even as it faces insecurity in Tigray and beyond. The National Electoral Board of Ethiopia announced only last week that the Harar and Somali regions would vote in September instead.

The United Nations warned this week that 350,000 people in Tigray face famine, and the U.S. State Department said it is “gravely concerned” about the environment surrounding the elections. The vote was meant to be the first test of Prime Minister Abiy Ahmed’s rule, but as analysts point out, 15 percent of constituencies will not participate, pushing his promise of a democratic Ethiopia even further away.

Namibia’s opposition rejects German deal. Germany’s historic admission of genocide in Namibia more than a century after the killings, along with a $1.3 billion aid package, was met with local discord. Although President Hage Geingob welcomed the deal after more than five years of negotiations, opposition lawmakers described Namibian negotiators as “sellouts” and the agreement as a “betrayal.”

The 1904-1907 genocide saw the deaths of tens of thousands of Herero and Nama people. Representatives accused officials in Berlin and Windhoek of ignoring them by avoiding direct reparations and overlooking issues such as land restitution. They have asked Geingob’s government to pause any implementation of the agreement.

South Africa’s winter of discontent. With the highest number of coronavirus infections on the continent, South Africa is entering its third wave of the pandemic as winter sets in and the vaccine rollout remains slow. Rolling blackouts have further dampened the national mood as the state-owned power utility buckles under years of corruption.

South Africans are also preparing to head to the polls for local government elections, with parties expected to campaign over the coming months despite restrictions and opposition calls to further postpone the vote. The country’s electoral commission has already pronounced the Oct. 27 vote as its most complex yet as it contends with rising coronavirus cases.

Rising COVID-19 infections. With the slow vaccine rollout across the continent, Africa is experiencing an increase in new coronavirus cases, with nearly 3.9 million cases since the start of the pandemic. Southern Africa has the highest number of cases—but it also has the highest incidents of testing, which could point to a worrying number of unreported cases elsewhere.

Bypassing privacy. Apple’s April announcement of new privacy protections was welcomed as a boon for users. The company’s latest software update allows people to decide if apps can track their activity across other devices and websites, meaning targeted advertising will potentially no longer collect data on usage outside of a particular app. According to Apple, the average Android or iOS app has six embedded trackers.

But Lagos-based news site Tech Cabal reports that these new privacy features won’t be extended to several African countries, including Egypt, South Africa, and Uganda, for “regulatory reasons.” Their governments won’t allow the private relay measures because they involved a third-party company encrypting user data against app trackers. In some cases, the regulatory differences are due to outdated legislation, but in others the privacy measures would hamper governments that engage in internet censorship.

It’s likely that other African countries could join the list as authoritarian governments see the opportunity to use their digital power to ban social media or simply shut down the internet entirely.

Buhari’s deleted tweet. In the Africa Report, Nigerian journalist David Hundeyin explains the past and present context of President Muhammadu Buhari’s post that Twitter removed—leading the government to ban the platform.

Vaccines and instability. With the painfully slow rollout of vaccines, Ugandan lawyer and author Rose Namayanja warns in Foreign Policy that African states will continue to struggle “under the fog of COVID-19,” with economies stalled and insurgent groups seizing the opportunity.