Afghan Interpreters in the Crossfire of U.S. Pullout

Future U.S. partners will have to “think twice” about helping the Pentagon if Biden isn’t able to grant visas to Afghan interpreters, lawmakers said.

Welcome to SitRep! Jack Detsch here, reporter at Foreign Policy magazine. Robbie is living in a van down by the river in Europe this week.

Here’s what’s on tap for the day: Congress is pressuring Biden to grant asylum to Afghan interpreters, a fight over anti-racist reading at the Pentagon, and a U.S.-China standoff for vaccine supremacy in Asia.

Welcome to SitRep! Jack Detsch here, reporter at Foreign Policy magazine. Robbie is living in a van down by the river in Europe this week.

Here’s what’s on tap for the day: Congress is pressuring Biden to grant asylum to Afghan interpreters, a fight over anti-racist reading at the Pentagon, and a U.S.-China standoff for vaccine supremacy in Asia.

Bring the Boys Back Home

Congress is stepping up pressure on the Biden administration to get Afghan interpreters who were promised U.S. asylum back to American soil, with the last U.S. troops set to leave the country by September (if not sooner). Lawmakers have proposed bumping up the number of visa authorizations by 20,000 and setting up an interagency task force to deal with the problem.

But they’re running out of options—and time. Delays in the visa program for Afghan interpreters can take up to 900 days. President Joe Biden’s deadline for U.S. troops to get out is less than 90 days away, and the State Department has frozen processing of applications as the coronavirus pandemic spirals out of control in Afghanistan.

Hurry up. Sen. Angus King, a Maine independent who caucuses with the Democrats, is worried that Congress won’t be able to get legislation done in time before U.S. boots are off the ground—with some officials expecting the Pentagon pullout will be done as soon as next month. So he’s asking the Biden administration to put more civilian and uniformed processing power in the mix in Washington.

But even if the Biden administration can get through all the paperwork, getting Afghans to safety is still tricky. The country is landlocked, meaning evacuations would have to be entirely by airlift. And it’s not clear that NATO allies who fought in Afghanistan would be willing to provide a way station, something that King is also considering asking for.

NATO Secretary-General Jens Stoltenberg said he would “welcome” the efforts of member countries to give asylum to Afghans, but he said nations would have to decide for themselves about whether to take more refugees.

Fall of Saigon. What’s the worst-case scenario? Lawmakers fear images coming out of Afghanistan akin to the 1975 fall of Saigon, with American partners on the ground clutching at air as Army helicopters carrying embassy staff zoomed out of the overrun country. In Afghanistan, King and other lawmakers said they’ve already heard of cases of former interpreters being hunted and murdered by the Taliban.

But we’ve seen this story more recently, too. In Iraq, thousands of interpreters who aided U.S. troops are still stuck in processing lines, and some say the targeting by militias has gotten worse since Iranian Quds Force leader Qassem Suleimani was killed by an American drone strike last year. And it’s also on display in Syria, where American forces evacuated a swath of Kurdish-held territory to allow a Turkish incursion in October 2019.

King fears that future interpreters are “going to have to think twice” about helping the United States “if there’s a major bloodbath in Afghanistan after we leave.”

You mess with the bull… you get the horns. Biden has tapped Carlos Del Toro to be his navy secretary, pending Senate confirmation, as Politico first reported. Del Toro, a Navy veteran, won strong backing from his home state Sens. Tim Kaine and Mark Warner of Virginia.

But he’ll face congressional pushback on a Navy budget that even top officials are acknowledging does little to change the balance of U.S. shipbuilding with China. Navalists in Congress such as Republican Rep. Mike Gallagher have long been pleading with the administration to name a service chief.

Ambassador class. Biden announced a slate of top ambassador picks this week. Former State Department No. 2 Thomas Nides is the pick to be U.S. ambassador to Israel, while Biden’s onetime Deputy National Security Advisor Julie Smith will be the American envoy to the NATO alliance.

Some other faces you might recognize: Former Colorado Sen. and Interior Secretary Ken Salazar is the pick to be ambassador to Mexico, and C.B. “Sully” Sullenberger, famous for landing a disabled passenger jet in the Hudson River in 2009, will be ambassador to the International Civil Aviation Organization.

Tell Zelensky to do the right thing. The next big summit on Biden’s calendar is a White House meeting with Ukrainian President Volodymyr Zelensky in July, and ahead of the talks, U.S. officials are sending high-level warnings to Kyiv to halt Chinese purchases of defense companies, Jack reports.

It’s an effort, dating back several years to when Chinese officials first began eyeing the helicopter engine manufacturer Motor Sich, that the Biden administration is worried China could use to establish a beachhead in Eastern Europe.

Book battle. Chief of Naval Operations Mike Gilday brushed off criticism from multiple Republican lawmakers at a hearing on Wednesday about the service’s inclusion on the Chief of Naval Operations Professional Reading Program’s reading list of Ibram X. Kendi’s How to Be an Antiracist, a book that explores the linkages between capitalism and racism.

While Gilday said he would not “defend cherry-picked quotes” from the book, he said the Navy’s best offense against racism “is by being honest and not to sweep it under the rug.”

The debate has international resonance: Russian President Vladimir Putin used a reference to the Black Lives Matter movement to parry questions about his own human rights record at his summit with Biden in Geneva on Wednesday.

Deal or no deal? Deal, according to the Iranians. Iran’s top nuclear negotiator Abbas Araghchi told Al Jazeera on Thursday that indirect talks between the United States and the Iranians are progressing, but key sticking points remain.

Specifically, Iran still has heartburn over former President Donald Trump’s exit from the 2015 Iran nuclear deal, and the Iranians want to ensure that a future American leader won’t seek to scuttle the pact. And there’s something else looming over the talks: Iran’s presidential election on Friday, which could see the return of hard-liners to power in Tehran (though Araghchi insists it will have no impact on the talks).

Get the AUMF out of here. Congress is making moves to reclaim its war powers from the White House. On Thursday, the House voted to revoke the 2002 Authorization for Use of Military Force (AUMF) for Iraq, a move backed by Senate Majority Leader Chuck Schumer and the Biden administration.

It’s a sign that lawmakers could soon move to go after the 2001 AUMF, which the Pentagon has long used as a legal catchall to conduct expansive counterterrorism campaigns across the Middle East and Africa. 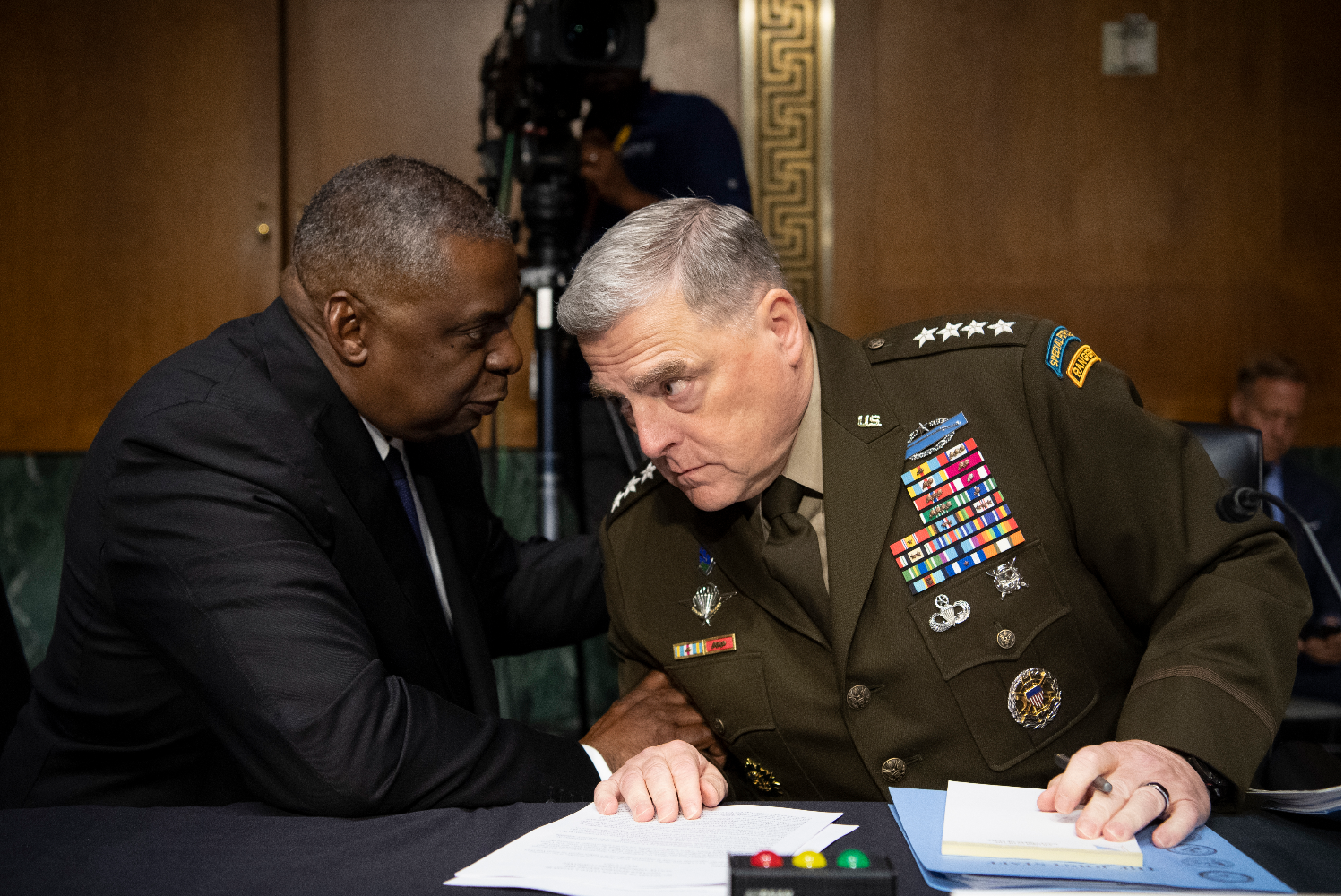 Close counsel: U.S. Secretary of Defense Lloyd Austin and Chairman of the Joint Chiefs of Staff Mark Milley huddle ahead of the start of a Senate Appropriations Committee hearing on June 17. Caroline Brehman-Pool/Getty Images

Excerpts from interviews with the people driving national security.

Democratic Sen. Tammy Duckworth joined a bipartisan congressional delegation to South Korea and Taiwan last week that included promises of U.S. vaccines to both countries. It also got some attention from China, which launched military exercises near Taiwan in an effort to dissuade growing (unofficial) U.S. ties with the island. Here’s what she said:

On the delivery of 750,000 vaccines to Taiwan: “Part of the conversation I was having with Sen. [Dan] Sullivan and Sen. [Chris] Coons … and then I had this [conversation] with the White House was like, ‘Listen, we need to send them vaccines. They’re the only country that’s being embargoed by [the] PRC, and they’ve been strangled from accessing vaccines. There’s this rumor that we’re not going to be there when they really need us. How are we going to convince the rest of the world that we’re going to be there and we can’t even be there for them with vaccines?”

On promoting U.S. values in the Indo-Pacific: “We’re not asking the world to become our allies. You know, we’re not asking you to sign treaties with us and become our allies. We’re just saying that we support the rule of international law. We support freedom of navigation in the Indo-Pacific, we don’t, you know, we will stand up to anyone who attempts to block the freedom of navigation, we stand up against nations that encroach upon the territorial sovereignty of other nations. I mean, again, China went out and built an entire island for crying out loud, and they’re now claiming [it] as Chinese so that they can claim more territorial waters.”

Never can say goodbye. U.S. troops are nearing the end of the Biden administration’s withdrawal from Afghanistan, and the White House is running out of time to get its gameplan in order for the war-torn country.

Join SitRep’s Jack and Robbie for another exclusive call with FP subscribers to talk about the debates going on inside the Beltway as the United States ends twenty years of war. We’ll also have details from our reporter’s notebooks and take your biggest questions about the Biden team’s emerging foreign policy.

Join us next Thursday, June 24 at 11am. Not a subscriber? Sign up with the code “SITREPCALL” and get 10 percent off of a premium monthly or annual subscription to all of FP’s great content.

Tuesday, June 22: Navy leaders are set to defend their budget before the Senate Armed Services Committee.

“There is no happiness in life, there is only a mirage on the horizon, so cherish that.”

Tupacmadinejad. “How long will they mourn me,” the late rapper Tupac Shakur once asked listeners before his untimely death in 1996. Among the fans mourning him “every mothafuckin’ day, homie,” as Tupac rapped in the song, is former Iranian President (and recent presidential hopeful) Mahmoud Ahmadinejad.

The erstwhile American antagonist took to Twitter on Wednesday to honor what would have been Tupac’s 50th birthday, prompting raised eyebrows from users. But Ahmadinejad, a longtime hip-hop head who’s used Tupac lyrics to remark on the death of George Floyd and the shooting of rapper Nipsey Hussle, has also prompted scorn in the comments section for Iran’s human rights abuses and suppression of free speech.

NEW FOR SUBSCRIBERS: Want to read more on this topic or region? Click + to receive email alerts when new stories are published on Security, United States, Afghanistan