The Western hemisphere is weighing how to respond to Nicaraguan President Daniel Ortega’s jailing spree.

The highlights this week: How the international community could try to bring Nicaragua back from an authoritarian brink, Colombian protesters shift to political organizing, and the war on drugs turns 50.

The highlights this week: How the international community could try to bring Nicaragua back from an authoritarian brink, Colombian protesters shift to political organizing, and the war on drugs turns 50.

The Western hemisphere is weighing how to respond to Nicaraguan President Daniel Ortega’s abrupt jailing spree of political opponents. In the past three weeks, his administration has arrested at least 16 people—including potential challengers in the November presidential election, high-profile former allies, the president of a major bank, and the former head of a business federation—on charges widely denounced as politically motivated.

“This hearkens back to the anti-communist national security dictatorships of the 1970s,” International Crisis Group’s Ivan Briscoe said. “It’s not just tilting the playing field along the lines of what we see very clearly in Venezuela in recent years. This is effectively removing the opposition as an actor.”

Hugo Torres, who fought Nicaragua’s Somoza regime alongside Ortega in the 1970s, said shortly before he was jailed Sunday that his former fellow revolutionary was bringing about a “second dictatorship.”

Condemning the arrests, the United States sanctioned four Ortega administration officials last week. More sanctions appear likely. A bipartisan group of U.S. legislators called for a review of Nicaragua’s participation in a free trade agreement between the United States, Central American countries, and the Dominican Republic. At the Organization of American States (OAS) Tuesday, 26 countries voted for a resolution to condemn Ortega’s actions, which may set the stage for Nicaragua’s expulsion from the group.

Isolation foretold? As this response unfolds, Briscoe said, international actors should keep in mind the effects of their actions on everyday Nicaraguans as well as potential spillover from the crisis to other parts of the hemisphere. Sanctions on their own may have a limited ability to change Ortega’s behavior given “his own history exposing Nicaraguans to economic suffering in the name of political victory.” Harsh sanctions could also cause a humanitarian disaster that drives Nicaraguans to migrate outward and northward as well as lead Managua to lean more on countries like China and Russia, as Venezuela has done.

Because of this, Briscoe recommends the international community push for a fluid diplomatic exchange with Ortega to try to yield concessions before, and potentially alongside, any sanctions. This might be possible in private, he said, via interlocutors, with a chance of swaying Ortega through a message of moral outrage—such as left-wing Latin American leaders and the Catholic church. The papal envoy in Managua has played a role in trying to mediate Nicaragua’s political meltdown since 2018, and Ortega and his wife, Rosario Murillo, are highly religious.

“None of this is easy or guaranteed,” Briscoe said, but it is worth trying when you consider the alternative.

Showdown at the OAS. Argentina and Mexico, the governments that could perhaps best serve as those left-wing negotiators, were among the few to abstain from voting Tuesday on the OAS resolution calling for the release of political prisoners and fair elections. The two countries said they were concerned by recent events in Nicaragua but cited a principle of noninterference in internal affairs, earning widespread criticism. Human Rights Watch’s José Miguel Vivanco tweeted, “One thing is to seek a negotiated exit to this crisis and another very different one is to say this nonsense.”

The resolution voiced a powerful message of moral outrage of its own, carrying the highest ever support of any resolution against Nicaragua at the OAS. Ortega’s crackdown will be taken up at the United Nations Human Rights Council next week.

Nicaragua’s envoy spoke repeatedly at the OAS session, calling the resolution an illegitimate interference in a sovereign matter.

Internal resistance. Although Nicaragua’s opposition is communicating furiously with one another, many are wary of public protests due to the risk of arrest. Several recent detainees spent days without being allowed to speak to their families. A report by Confidencial’s “Esta Noche” this week revealed police were guarding several key points throughout Managua where protesters typically gather.

Journalist Carlos Chamorro wrote in El Faro that the moment requires extreme solidarity among Nicaragua’s democrats, particularly the private sector, which has played an important supporting role for Ortega in the past.

“I think it’s a moment of being a little more realistic and taking steps that are more consequential,” human rights activist Ivannia Álvarez told “Esta Noche.” “We need an exit from this regime because if one thing is sure, it is that the future with Daniel Ortega is dark.”

Tuesday, June 22: The Organization for Economic Cooperation and Development launches its annual report on domestic agricultural policies in member states and other countries, including Argentina, Brazil, Colombia, Costa Rica, and Mexico.

Regional vaccine diplomacy. After Mexico shipped its first batch of locally finished AstraZeneca vaccine doses to Argentina late last month as part of a partnership between the two countries, it announced donations of 400,000 doses to Belize, Bolivia, and Paraguay. Meanwhile, Mexico received about 1.35 million Johnson & Johnson doses on Tuesday donated by the United States.

South America, in particular, continues to be ravaged by COVID-19. As of Thursday, nine Latin American countries were among the world’s top 10 countries in deaths per capita, according to Our World in Data.

Election results. In the final results of Mexico’s midterm elections, Mexican President Andrés Manuel López Obrador’s Morena party picked up 11 of 15 available governorships, but its coalition lost its supermajority in Congress and the party lost ground in Mexico City.

With votes fully counted in the Peruvian elections, leftist Pedro Castillo earned 50.13 percent of votes to Keiko Fujimori’s 49.88 percent, although Fujimori had not conceded as of Thursday afternoon, when she was still contesting some of the ballots. Independent observers maintain the election was clean.

Sanctions workarounds. For years, Venezuela evaded U.S. sanctions with the help of Mexican middleman firms and a broader network of companies in 30 countries, according to a detailed investigation by El País and Armando.info.

A car bomb in Cúcuta. A car bomb exploded at a Colombian military base near the Venezuelan border on Tuesday, wounding at least 36 people. As of Thursday afternoon, no group had claimed responsibility for the attack, although Colombia’s defense minister announced he suspected guerrilla groups. 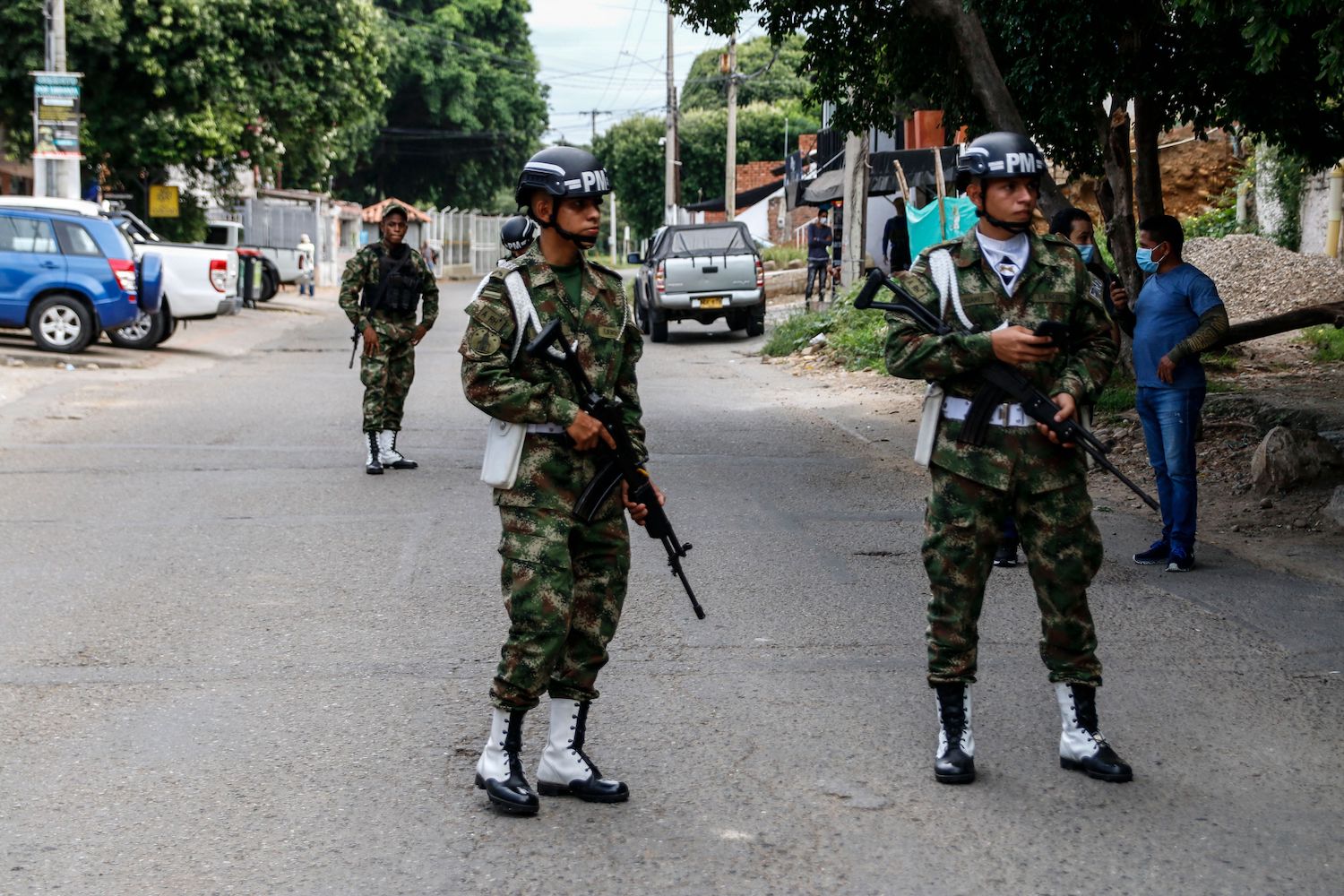 Soldiers stand guard near a military unit in Cúcuta, Colombia, on the border with Venezuela, on June 15.Schneyder Mendoza/AFP/Getty Images

Migration in comics. Mexican cartoonist Humberto Ramos, a DC and Marvel veteran, and screenwriter Guillermo Arriaga of Amores Perros and Babel fame created the comic book story of Ana, a Honduran girl who migrates north after an episode of gender-based violence. Encounters with smugglers and a migrant caravan are laid out with all of the vivid detail readers might expect from an illustrator of Spider-Man. Free to download, the project was backed by the European Union and Save the Children to raise awareness about conditions facing migrant children.

Fifty years ago this week, then-U.S. President Richard Nixon declared drugs “America’s public enemy number one.” In a Washington Post essay series published Monday on the failures of the war on drugs, it said “perhaps no political decision has had a greater impact on Latin America’s recent past and present.”

The essay on Brazil discusses how a 2006 drug law led the country’s prison population to expand to what is today the third largest in the world. Around how many Brazilians were incarcerated in 2020? 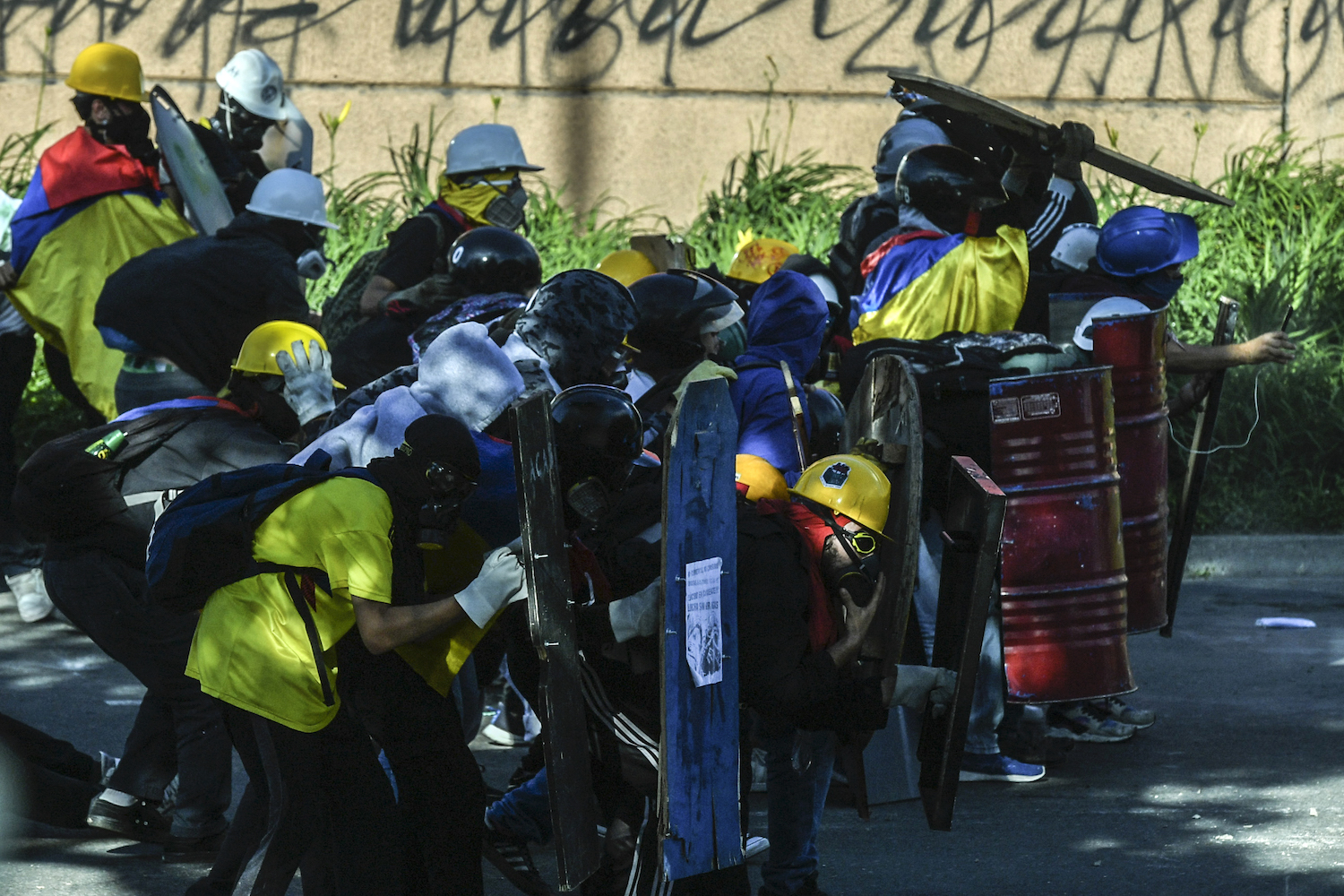 Demonstrators use makeshift shields as they clash with riot police during a protest against the government in Medellín, Colombia, on June 16.Joaquin Sarmiento/AFP/Getty Images

After 48 days of protests that shook Colombia and included nationwide street blockades, the killings of dozens of people, and government withdrawals of proposals on tax and health reform, the country’s main protest committee announced a pause in demonstrations to focus on pushing their demands forward via legislative proposals and in meetings with different social stakeholders.

The protests were sparked over a tax hike and grew to denounce inequality, police violence, and noncompliance with the 2016 peace accord between the government and the Revolutionary Armed Forces of Colombia. Disapproval of Colombian President Iván Duque Márquez now stands at 76 percent.

Why pivot now? The protest committee for over a week held talks directly with Duque and even reached a draft agreement on May 24 banning military assistance and lethal weapons at protests as a precondition for further negotiations. But Duque then demanded changes to key elements of the draft agreement, and tensions heightened after at least 13 people were killed in Cali, Colombia, on May 28.

The pause is meant to prevent killings of protesters and aggravating Colombia’s COVID-19 outbreak, one protest leader, Percy Oyola, said. The country is experiencing its worst peak of coronavirus deaths by far, with more than 500 people dying each day. Although 73 percent of Colombians approved of the protests one month after they began, criticism of street blockades has grown, especially after two babies died in an ambulance that was halted at one barricade.

The new approach. Protesters plan to speak with the private sector, local officials, and Colombians writ large in assemblies and meetings to draw up bills on issues like basic income, police reform, free public education, and more job stability for health workers. They have also announced another protest for July 20.

This pivot to dialogue and political organization could be seen as a maturation of the protests, such as what occurred in Chile after its own nationwide uprising in 2019. In Foreign Policy, social scientist Beatriz Della Costa wrote Colombia’s protesters would do well to follow Chile’s example, where, through careful organizing, outrage was channeled through parties and elections to reshape the country’s political landscape.

That’s according to the government’s numbers. Although the U.S. prison population has been modestly declining since its 2009 peak, Brazil’s has more than tripled since 2000.

The Washington Post’s essays on the war on drugs by journalists from Peru, Brazil, Colombia, El Salvador, Mexico, and Spain can be read here.

His arrests of opposition candidates could seal the country’s political fate, but not if Biden fights back now.