Impact hubs are a quicker way to get everyone in the world their shots. 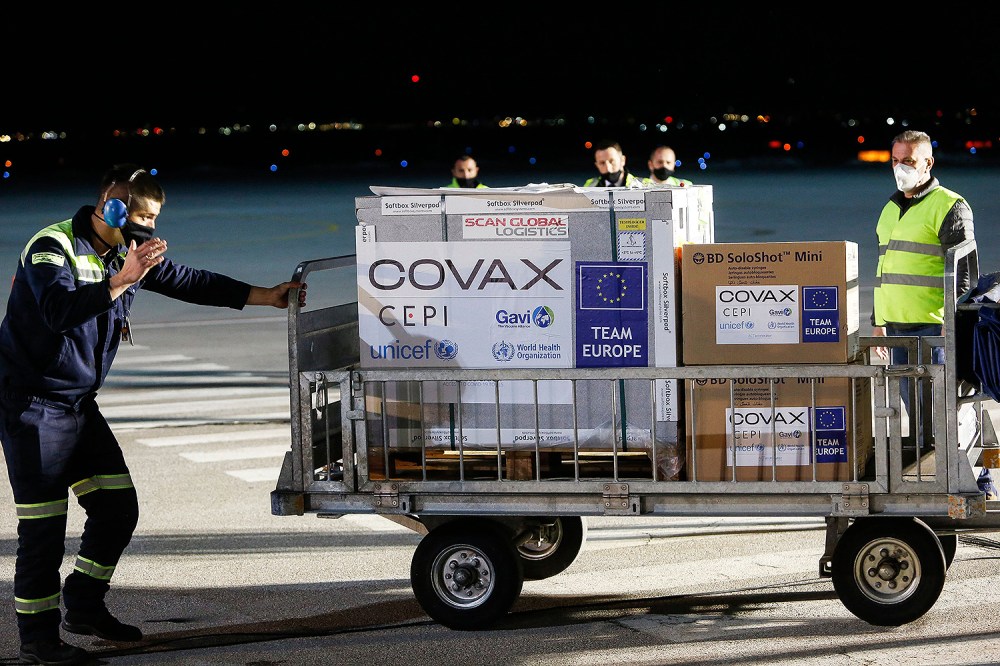 At first sight, the global vaccination rollout is mesmerizing. At least 2.4 billion people have already received at least one dose. But scrape a little deeper and the unevenness of vaccine distribution loses its luster. Just 480 million people have been fully vaccinated or 6.2 percent of the global population. What’s more, well over half of all administered doses have been injected into the arms of citizens from just two countries: the United States and China.

Following their summit in Cornwall, England, last week, the leaders of the G-7 nations committed to donating an additional 1 billion COVID-19 vaccines to poorer countries in 2021 and 2022. The Biden administration said 500 million of those doses would be provided by the United States, mostly through COVID-19 Vaccines Global Access (COVAX), a global vaccine facility managed by the Global Vaccine Alliance (Gavi) and the Coalition for Epidemic Preparedness Innovations. China is likewise distributing jabs to advance foreign-policy goals, having so far exported more than 250 million doses to other countries.

Less than 1 percent of the billions of vaccine doses administered to date have gone to low-income countries.

Notwithstanding the surge in vaccine diplomacy, far more investment is needed. Less than 1 percent of the billions of vaccine doses administered to date have gone to low-income countries. At the current rate of distribution, it will take until 2024 before all countries have sufficient supplies to vaccinate their populations. It is not just vaccine nationalism and supply chain disruptions that are slowing vaccination in poorer countries, but also financial constraints. To attain even the modest goal of vaccinating 20 percent of the people in 92 low-income countries by the end of the year, COVAX said it needs an additional $2.8 billion.

The delay is dangerous and costly for all nations. Recurrent outbreaks will prolong the global economic slowdown, which has already cost the world $28 trillion in lost output. If, by this summer, wealthier nations are fully vaccinated yet developing nations remain unvaccinated, global economic losses could add an additional $9 trillion to the bill. And the longer more contagious and lethal variants are allowed to incubate and spread, the greater the risk a vaccine-resistant strain emerges. As U.S. President Joe Biden has said, “We will ultimately not be safe until the world is safe.”

An urgent, all-hands-on-deck effort is needed to fund COVAX and Gavi in particular. So far, the focus has been on what governments can do. Mapping the funding network for Gavi and COVAX reveals two intriguing features of the current financing environment. First, governments have provided the lion’s share of financial support. Of the $9.5 billion pledged, $8.8 billion is from national governments. Second, although the remaining funding only makes up a small share, it comes from a surprisingly diverse array of organizations, including philanthropic foundations, corporations like Visa and Google, and even civil society groups like the charitable video game festival Gamers Without Borders.

This map visualizes funding commitments made toward the COVAX global vaccine facility as of April 29. Blue lines represent funding from government sources while private funding is shown in yellow. The two large bubbles are the main funding recipients: the Global Vaccine Alliance (Gavi) and the Coalition for Epidemic Preparedness Innovations (CEPI). The scale of funding is represented by bubble size and line thickness.

In fact, a wide range of actors contributes to Gavi, which itself partners with local governments and nongovernmental organizations to distribute vaccines and run immunization programs. Even before the COVID-19 pandemic, Gavi had immunized nearly 900 million children against infectious diseases. It is an archetypal “impact hub,” an international initiative that assembles multiple actors from various sectors to make demonstrable progress toward solving a range of seemingly intractable global challenges.

Impact hubs such as Gavi offer a model for a new kind of international cooperation oriented around multistakeholder networks rather than nation states. They form the basis of what United Nations Secretary-General António Guterres calls “networked multilateralism,” in which member states—together with U.N. agencies, international financial institutions, businesses, philanthropic groups, regional and municipal governments, and civil society organizations—work together to fix the world’s most intractable problems.

To strengthen Gavi as an impact hub and demonstrate the efficacy of networked multilateralism, the United Nations should lead a fundraising effort to attract more contributions from the philanthropic and private sectors. Although a diverse array of organizations already contributes to Gavi, the total from these sectors is still relatively small—only $331 million. And nearly half of that comes from a single donor: the Bill & Melinda Gates Foundation.

As the country opens up, a third wave looms.

Underfunding and India’s export restrictions mean some African citizens may have to wait until 2023 to get their shot.

The gulf between haves and have-nots is only growing.

There is a clear opportunity for the philanthropic and private sectors to step up. According to a UBS-led study, there are more than 260,000 foundations in 39 countries with combined assets of more than $1.5 trillion. The annual expenditures of all these foundations exceeds $150 billion per year, suggesting an opportunity to ramp up support considerably. The United Nations can also appeal to any of the nearly 6,000 corporations that signed on to the U.N. Global Compact, an agreement under which signatories commit to 10 sustainability principles. Even if only 30 of these companies committed $10 million each to Gavi, that would more than double the existing contribution total from the private and philanthropic sectors.

This shouldn’t be a hard sell. Fortune 500 companies spend $20 billion annually on corporate social responsibility efforts, an average of $40 million each. Global vaccination is an urgent, high-profile imperative, and contributing to it would burnish a company’s reputation and boost morale. In addition to it being the right thing to do, it is also profitable. The pandemic is costing global industries—from tourism and airlines to food services and retail—billions of dollars in lost revenue. Ultimately, global economic recovery hinges on vaccination. A corporation’s contribution is not so much a donation as an impact investment that will deliver both social and economic returns.

In leading such a major fundraising effort for COVID-19 vaccines, the United Nations would amplify networked multilateralism oriented around impact hubs, such as Gavi and other multi-actor partnerships that have proved success at scale. The effort could also draw inspiration from the COVID-19 Solidarity Response Fund established early on during the pandemic. Set up by the World Health Organization and United Nations Foundation, the fund crowdsourced donations to finance equitable access to COVID-19 treatment for the most vulnerable populations. In a short time span, it raised more than $250 million from 100 companies and 660,000 individuals in 190 countries.

A similar approach should be used for other goals besides the vaccination campaign. Building on the Global Compact on Refugees, for example, the U.N. High Commissioner for Refugees and the newly created Mayors Migration Council could scale up a global network of cities, businesses, and international organizations to help with refugee resettlement. Likewise, the United Nations Environmental Program could partner with the Global Covenant of Mayors for Climate and Energy, an alliance of more than 10,700 cities, to help fund and implement climate targets.

Ending the pandemic is just the first step to recovery. COVID-19 has triggered setbacks in virtually every one of the United Nations’ Sustainable Development Goals, from reducing poverty and inequality to improving health and education. The pandemic has also accelerated urgent security challenges, from digital harms to military confrontation. If the current system of global cooperation fails to help the world recover, grievances and mistrust toward the United Nations and member states will intensify. If the world is to build back better—and develop the capability to address the looming crises of the future—then impact hubs are needed.

Katherine Aguirre is a researcher at the Igarapé Institute.

Gordon LaForge is a senior researcher at Princeton University and a lecturer at Arizona State University’s Thunderbird School of Global Management.

Anne-Marie Slaughter is the CEO of New America and the author of The Chessboard and the Web: Strategies of Connection in a Networked World. Twitter: @SlaughterAM

NEW FOR SUBSCRIBERS: Want to read more on this topic or region? Click + to receive email alerts when new stories are published on Health, Pandemics

The Minsk Group Is Meaningless

The Long and Infuriating History of Bad Olympic Bosses