With the situation in Afghanistan rapidly deteriorating, expect the mood to be grim when Ghani and Abdullah meet Biden.

A Difficult Moment for U.S.-Afghan Relations

The Taliban are on a rampage in Afghanistan. They have seized more than 50 districts since May and surrounded five provincial capitals. On Tuesday, they captured Afghanistan’s main border crossing with Tajikistan. Beleaguered Afghan soldiers are surrendering rural outposts. The latest U.S. intelligence assessment says the Taliban could topple Afghanistan’s government within months.

Meanwhile, U.S. forces are carrying out their final withdrawal, and U.S. Defense Department officials confirmed this week they are on track to meet U.S. President Joe Biden’s Sept. 11 deadline. Given rapid destabilization, when Afghan President Ashraf Ghani and chairperson of the High Council for National Reconciliation Abdullah Abdullah meet Biden on Friday in Washington, the mood will be grim.

U.S.-Afghan relations aren’t just suffering because U.S. troops are heading for the exits. In April, leaked documents revealed the Biden administration had proposed a peace initiative to Ghani that called for a new transitional government, something Ghani rejects, fearing it could end his time in power.

Bilateral relations began to cool in February 2020, when the Trump administration negotiated an agreement with the Taliban—without involving Kabul—that stipulated a full U.S. withdrawal by May of this year. Critics say the deal, which also called for the release of Taliban prisoners, gave too much to the insurgents.

The Biden administration’s invitation to Ghani and Abdullah does make clear all is not lost for the United States and Afghanistan; a White House statement this week said the visit will focus on their “enduring partnership.” Given Afghanistan’s worsening security crisis, it couldn’t come at a more crucial time.

On Friday, Biden’s main message will likely be one of reassurance. He will affirm his intention to continue providing development assistance and diplomatic support for the peace process. But Ghani will want Biden to commit to providing financial assistance to the Afghan military, which is dependent on foreign support. The U.S. Defense Department intends to keep funding key capabilities, but U.S. military support was not mentioned in this week’s White House statement.

Ghani may also urge Biden to slow down the pace of the military withdrawal, which some U.S. officials have said could be completed as soon as next month. Recent U.S. messaging suggests Ghani could get his wish. On Monday, Pentagon spokesperson John Kirby said, “If there needs to be changes made to the pace [of the pullout], …we want to maintain the flexibility to do that.”

Ghani and Abdullah will emphasize unity and common purpose in their meeting with Biden. Although the leaders have recently resolved some differences, they don’t get along. They clashed in the previous government, when Ghani was president and Abdullah was chief executive. Afghanistan’s political class is notoriously fractious, and it has struggled to craft a consensus on a vision for peace.

Washington fears these disagreements could undermine peace prospects. So the fact that Ghani and Abdullah are coming to Washington together is as significant as the visit itself. The leaders will seek to convince Biden the Afghan state is united and prepared for peace talks—if they ever resume. They may also mention an anticipated meeting in Doha, Qatar, involving seven senior Afghan political leaders and the Taliban.

As important as this visit is for Ghani and Abdullah, Washington’s influence in Kabul is rapidly receding. The United States remains a critical player in Afghanistan, especially through its financial assistance and facilitation of the peace process. But the end of its military footprint lessens its leverage. Financial and diplomatic assistance will continue but likely not indefinitely.

Afghanistan would be wise to work on deepening ties with its neighbors in the coming months, but that is no easy task. Its relations are tense with Pakistan, warm with India, cordial but complex with Iran, and slowly growing with Russia and China. Unlike Washington, these governments will suffer the spillover effects of an increasingly destabilized Afghanistan. They all have an interest in working with Kabul to alter the country’s dangerous trajectory.

Tuesday, June 29: The Centre for Social and Economic Progress hosts a discussion on a new book about India-China relations by Kanti Bajpai.

India’s third wave? In recent weeks, India has shown signs of recovery from its devastating second wave of COVID-19. But experts are already sounding the alarm about a potential third wave that could strike by October. A Reuters poll of medical experts predicts the next wave would be better controlled than the previous one, but also the pandemic will remain a threat in India “for at least another year.”

Since May, India has averaged around 3 million vaccinations every day, far less than the 10 million health authorities say is necessary to protect the population from future surges. (Less than 4 percent of the population is fully vaccinated, and only 17 percent have received one shot.) However, the figure should increase in the coming days. Monday was the first day of India’s new vaccine policy, which calls for free vaccines for all adults.

According to local reports citing finance ministry officials, the FATF now believes Pakistan has completed all but one of its action items. But the remaining tasks are ambitious: They relate to prosecuting and sanctioning internationally designated terrorists. Pakistani officials admit the FATF is unlikely to say it has made enough progress to warrant removal from the gray list on Friday.

The gray list isn’t as serious as the FATF’s black list, but Pakistan is keen to be removed given its impacts on investor perceptions. It’s also a concern for the International Monetary Fund, which is negotiating a bailout package for Islamabad.

Sri Lankan environmental disaster. A container ship carrying toxic materials and plastics caught fire off the coast of the port of Colombo, Sri Lanka, in May and remained in flames at sea before sinking last week. Last weekend, a United Nations official said the disaster had caused “significant damage to the planet.”

The incident has been described as Sri Lanka’s worst maritime environment disaster: Its waters are now contaminated with toxic waste, several dozen sea animals have been found dead, and fishing has been banned. The only saving grace is, so far, there are no indications of an oil spill. International experts have arrived to investigate further. 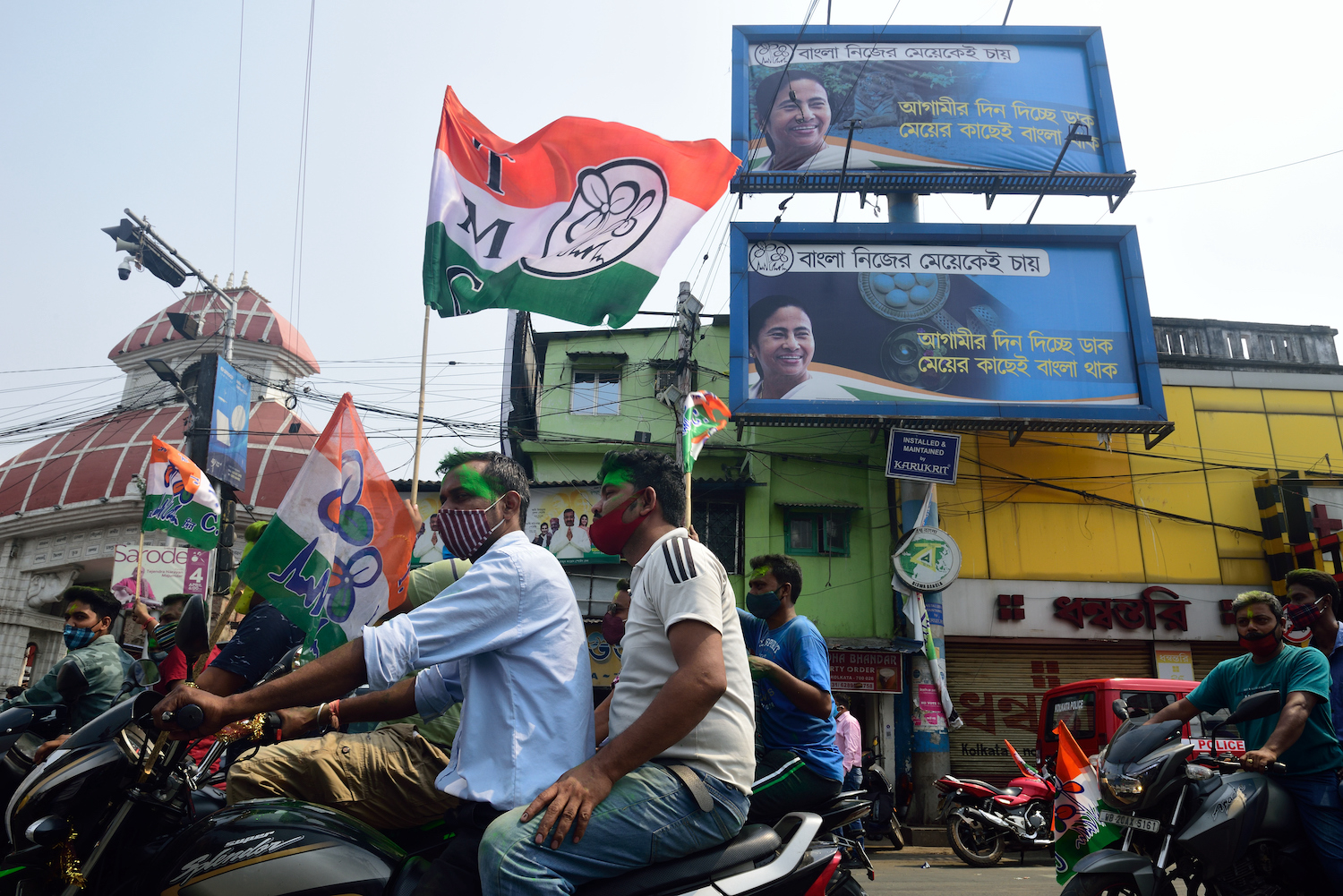 All India Trinamool Congress supporters celebrate the party’s victory in the West Bengal elections in Kolkata, India, on May 2.Sumit Sanyal/SOPA Images/LightRocket via Getty Images

Several leaders from India’s ruling Bharatiya Janata Party (BJP) are talking about partition—not the Partition of 1947 but the idea of partitioning the Indian state of West Bengal. At a party meeting earlier this month and in recent comments, BJP lawmakers have spoken of creating a new Indian Union territory in the northern part of the state to be called North Bengal.

Their justifications range from wanting to reduce “infiltration” from Nepal and Bangladesh to acceding to separatist sentiment in the region. However, Scroll.in’s Shoaib Daniyal identifies another possible motivation: increasing BJP electoral strength.

West Bengal is controlled by Mamata Banerjee, one of Indian Prime Minister Narendra Modi’s most powerful political rivals. She was reelected to a third consecutive term as the state’s chief minister last month. The BJP won nearly 80 percent of the parliamentary seats in West Bengal’s five northernmost districts, but it fared much worse everywhere else in the state.

“If the United States … couldn’t win the war from inside Afghanistan after 20 years, how would America do it from bases in our country?”

In South Asian Voices, Islamabad-based analyst Saif Khattak argued Pakistan must change its soft-power strategy. Instead of emphasizing diplomacy and tourism, it should use media, education, and commerce as vehicles. He cautioned Pakistan “still has a long way to go before it properly harnesses the untapped potential of these soft power resources.”

Sonam Tshering, a lawyer in Thimphu, Bhutan, argued on Kuensel Online against a new law that criminalizes people in debt. Tshering wrote the law will harm debtors, creditors, and taxpayers. Instead, “our legislature must enact laws that fixes [the] onus on creditors to ensure strong adherence to due diligence” so they don’t lend to debtors who can’t pay.

In the Himalayan Times, Tanushree Thapa, an environmental analyst in Kathmandu, Nepal, wrote about how farmers in Gandaki Province are mitigating climate change risks through the use of water recharge ponds, climate-resilient seeds, and solar-powered irrigation. She argued the province is becoming a “trailblazer in the shift to ‘climate-smart villages’ and sustainable agriculture.”

NEW FOR SUBSCRIBERS: Want to read more on this topic or region? Click + to receive email alerts when new stories are published on Military, South Asia, Afghanistan