Barbados Is Ready to Say Goodbye to the Queen

This year, it plans to become a republic—here’s why, and what that means for others in the region.

On Sept. 16, 2020, Barbados Governor General Sandra Mason—Queen Elizabeth II’s representative in the country—announced that she would soon be out of a job. “The time has come to fully leave our colonial past behind,” Mason said.

Mason added that by Nov. 30, 2021, on the 55th anniversary of the country’s independence, Barbados will break up with Elizabeth and instead swear in a local Barbadian president as head of state. In doing so, Barbados is going to become a republic.

The announcement was not a surprise for anybody on the tropical island: The debate on republicanism has been alive and well for around 40 years. However, the timing picked by the government to give the queen a final farewell has raised eyebrows.

On Sept. 16, 2020, Barbados Governor General Sandra Mason—Queen Elizabeth II’s representative in the country—announced that she would soon be out of a job. “The time has come to fully leave our colonial past behind,” Mason said.

Mason added that by Nov. 30, 2021, on the 55th anniversary of the country’s independence, Barbados will break up with Elizabeth and instead swear in a local Barbadian president as head of state. In doing so, Barbados is going to become a republic.

The announcement was not a surprise for anybody on the tropical island: The debate on republicanism has been alive and well for around 40 years. However, the timing picked by the government to give the queen a final farewell has raised eyebrows.

The economy of Barbados, an eastern Caribbean island of around 280,000 people, depends heavily on the tourism industry—and despite some innovative efforts, such as the creation of a remote working visa, visitors have been scarce during the COVID-19 pandemic. With unemployment in 2020 nearing 13%, becoming a republic may not be everyone’s top priority. Yet Mia Mottley, the country’s popular and charismatic prime minister, is determined to get it done.

With recent discussions around race in the royal family and a looming transition of power in the British monarchy, some wonder if Barbados could also start a domino effect and challenge the influence of Britain in all its overseas realms, already weakened by Brexit. 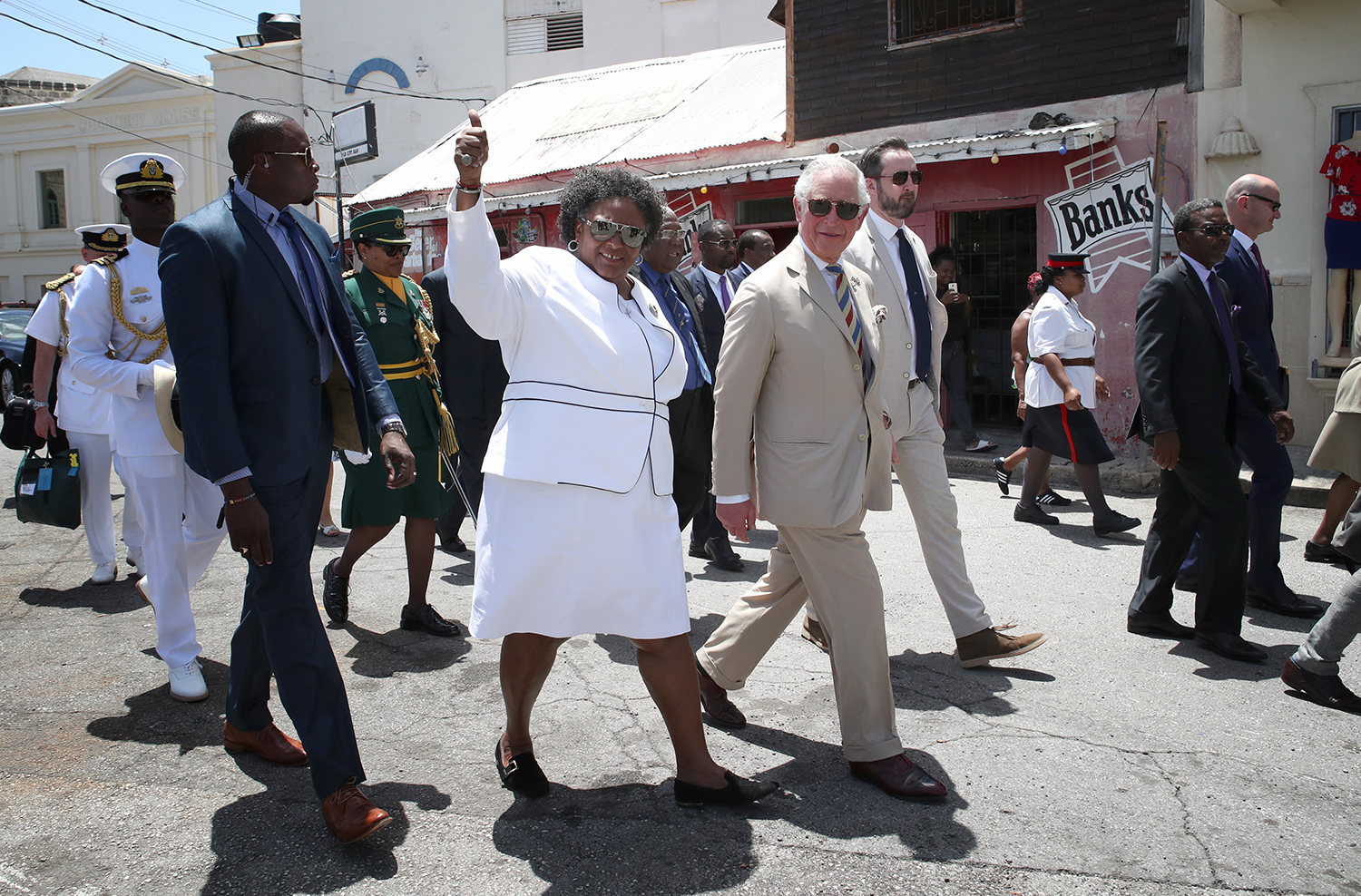 Barbados Prime Minister Mia Mottley gives a tour to Prince Charles in Bridgetown, Barbados, during his royal trip to the Caribbean on March 19, 2019.Jane Barlow/Reuters

Becoming a republic separate from the British monarch, a power left to individual countries, has been a matter of bipartisan consensus for a while in Barbados, but Mottley’s timing did not please everyone.

“It was a convenient distraction from COVID and the economic crisis we are in,” Guy Hewitt, a former high commissioner for Barbados in the United Kingdom and a member of the opposition party, said. He believes that the island is ready to make the transition but that it also needs more time to think the process through and do it properly.

Mottley, who has campaigned on republicanism, won a landslide victory in 2018 elections when her party won all 30 seats in the House of Assembly. Mottley believes the people of Barbados gave her a clear mandate to break with the monarchy. To do so, she’ll need a two-thirds majority vote in both houses. Since parting with the United Kingdom has historically gotten bipartisan support, she is likely to get the backing she needs.

However, if the destination is clear, the path for getting there is far less so. Mottley has opted to go forward without a public referendum and has been relatively silent on the process after the September 2020 announcement. Recently, the Nation, Barbados’s largest newspaper, questioned in an editorial the government’s handling of the reform, writing: “a referendum should not be off the table.”

As Harry and Meghan Arrive, Canadians Wonder if They Should Dump the Queen

The celebrity couple abandons their royal duties and moves to Vancouver Island. For Canadians, that rekindles an old debate: Why is a British monarch still their head of state?

Harry and Meghan Are Leaving the Job but Keeping the Salary

Blame the British press and Buckingham Palace staff for the royal Brexit.

British royals aren't wilting flowers — they’re diplomatic weapons. And Elizabeth II is one of the best.

Instead, in May, the government announced the creation of a Republican Status Transition Advisory Committee, a 10-member committee with the mandate of thinking through what the republic should look like, what it means to say farewell to the queen, and what the role of the president should be.

Marion Williams, a retired economist and diplomat, is in charge of the committee. She says the committee will examine previous work done on the topic, such as a 1998 report on republicanism and proposed 2004 constitutional amendments; will hold discussions with the public and influential examinations; and will come up with recommendations on the republic. The committee’s advisory report is expected in September.

When asked if Barbadians would feel a direct impact in their daily life after Barbados parts ways with the queen, her answer was clear: “No.” For her, the changes are superficial: Knighthoods are going to become national honors, and the Royal Barbados Police Force is going to remove the regal mention in its name.

For Hewitt, the problem lies in one word in the name of the committee: advisory. “It means the prime minister has the final word on everything,” he said. The Parliament will vote on the measures, of course, but Mottley’s party holds the majority.

Mottley’s office did not follow up on multiple requests for an interview. The United Kingdom’s mission to Barbados said in an email about the decision that “Barbados’ desire to become a republic is a matter for the Barbados Government and its people. The UK enjoys a warm, long-standing relationship with Barbados and will continue to do so.”

While officially, the United Kingdom says it respects the country’s decision, unofficially, Mason’s announcement came as a surprise for many high-level British officials. According to a high-level diplomat speaking on condition of anonymity, Barbados did not warn the British Foreign and Commonwealth Office the separation was coming officially before the throne speech, though it did tell Buckingham Palace. That is something that some diplomats might have appreciated knowing ahead of time. 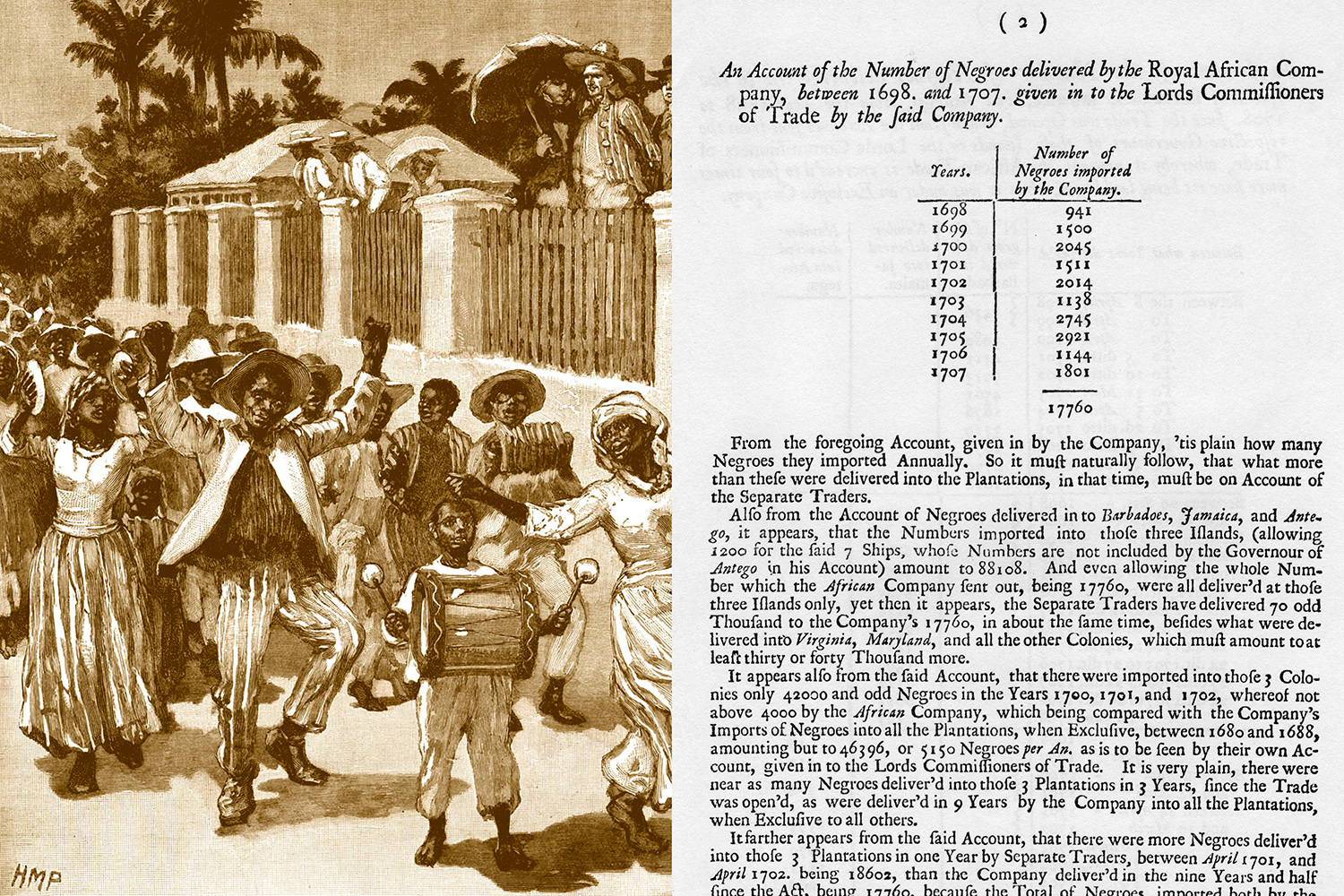 Left: A depiction of the emancipation of slaves in Barbados in 1833. Right: An account of the number of Africans delivered to the islands of Barbados, Jamaica, and Antigua for the years 1698-1701.Culture Club/The Print Collector/Print Collector/Getty Images

Barbados is the birthplace of the British slave society, where, according to the Barbadian historian Hilary Beckles, Britons “made their fortunes from sugar produced by an enslaved, ‘disposable’ workforce, and this great wealth secured Britain’s place as an imperial superpower and [caused] untold suffering.”

Although the island has been looking toward independence for a while, some there, like Risée Chaderton, a photographer and activist, had hoped for more meaningful discussions about race and the country’s history before becoming fully independent. While she supports the republican project, she isn’t fully satisfied with the way it’s being implemented.

She has watched the saga around Oprah’s interview with Meghan, the Duchess of Sussex, unfold in recent months—and the event, in which British Prince Harry’s wife spoke out about racism within the monarchy, was telling. “I don’t think it should have taken them having a family member who is … of multiple ethnicities to suddenly realize that they can connect with people around the world,” she said.

For Kevin Farmer, the deputy director of the Barbados Museum and Historical Society, the relationship between Barbados and the U.K. is “nuanced and complicated.”

“Colonization is why the majority of the population is here,” he said. “At the same time, the British Crown was a major investor in slavery.”

Some have argued that inequality is rising on the island, in part due to remnants of colonialism and “post-colonial oligarchy.” And Barbadians, including the prime minister, are still fighting to get reparations from Britain and Europe after a commission established by Caribbean heads of government called for the implementation of a 10-point reparation plan.

“We’ve been independent since 1966,” Chaderton said, “yet we are still clinging on to these vestiges of colonialism that aren’t doing us any good. I think a clean break would have been good for our country and good for us.” 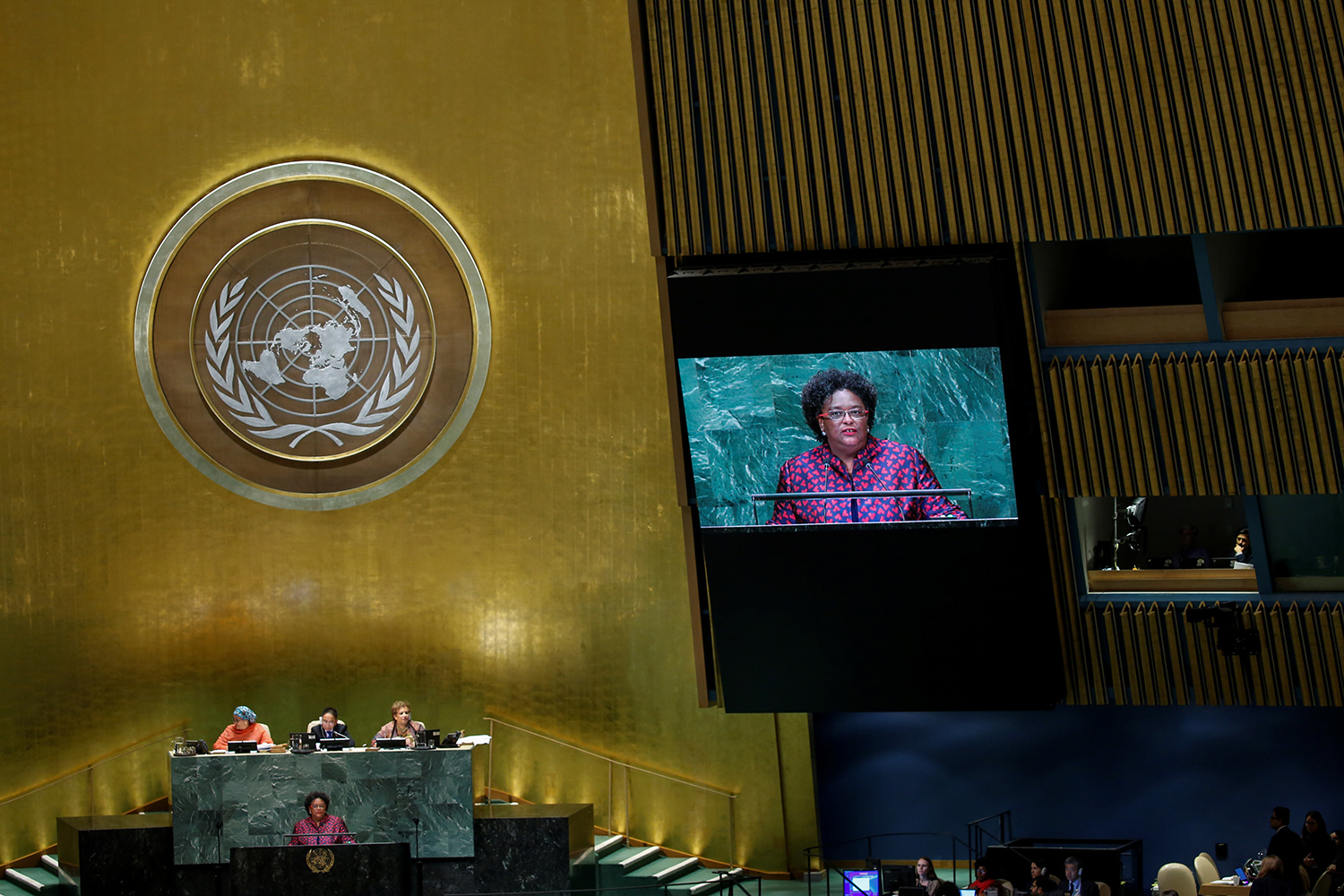 If the breakup between Barbados and the British monarchy ends up being amicable, could it inspire other countries to do the same?

According to Aaron Kamugisha, a professor of Caribbean and Africana thought at Bridgetown’s University of the West Indies at Cave Hill, Barbados, the domino effect is likely to be limited. “It is unlikely that Canada, Australia, and New Zealand will be concerned about constitutional decisions made in Barbados,” he said, “but there could be some limited impact in the Caribbean region,” with Jamaica being the country he could most see being inspired by Barbados’s example.

While the way people feel about the monarchy matters, there are also potential political challenges that make it harder for some countries to set themselves free than others. “In some cases, it’s just constitutionally very, very difficult,” Philip Murphy, the author of The Empire’s New Clothes: The Myth of the Commonwealth, said. “In the Canadian case, for example, the 1982 constitution made it almost impossible to become a republic.” In Barbados, it’s not a constitutional requirement to hold a referendum to drop the queen.

Still, the royal family’s popularity has plunged in some commonwealth nations after Meghan’s revelations, even in countries where republicanism hasn’t been part of the conversation. In Canada, two-thirds of people polled by Ipsos after the interview said the queen and royal family should not have any formal role in Canadian society. The interview has also revived republican debates in Australia.

Hewitt believes the expected upcoming transfer of power in Buckingham Palace may be a turning point for the monarchy, as some countries may be waiting until the end of the queen’s reign to move on. “I think once the Crown passes from the queen to Prince Charles it is going to happen,” he said. “The reason why they don’t do it before is because of a sense … of regard for her personally.”

The last time a country in the Caribbean said farewell to the queen was more than 40 years ago when Dominica declared itself an independent republic in 1978. This November and the years that follow will tell whether a new wave of goodbyes will be in the offing. Until then, one of the most visible remnants of the U.K.’s colonial past is everywhere in Barbados: It’s in every car. Drivers still drive on the left side of the island—and while many people agree it’s time to say goodbye to their colonial past, they also agree it may not be necessary to change everything. “I would get into so many accidents!” Chaderton said, laughing.

Stéphanie Fillion is a French Canadian reporter specializing in foreign affairs based at the United Nations, where she writes for PassBlue and hosts UN-Scripted, a podcast on the U.N.