One hundred years since its founding, the party commands more control inside China than ever before.

The highlights this week: The Chinese Communist Party celebrates 100 years since its founding, Hong Kong grapples with one year of the draconian national security law, and China builds a new nuclear launch site in Gansu.

The highlights this week: The Chinese Communist Party celebrates 100 years since its founding, Hong Kong grapples with one year of the draconian national security law, and China builds a new nuclear launch site in Gansu.

Thursday, July 1, marks the 100th anniversary of the founding of the Chinese Communist Party (CCP)—at least the official anniversary.

Like much about China’s history, the party’s actual founding date, July 23, has been changed in favor of a tidier account, in part because Mao Zedong may have misremembered it. And as usual with big events, the lead-up has seen a blitz of television and newspaper propaganda, along with planned parades, speeches, and a shutdown of much of central Beijing.

The CCP has remade itself several times—from abandoning Soviet models to its contemporary emphasis on ethnonationalism. But its Leninist determination to be the sole power in China has never changed, even if its ability to enforce its authority has been weaker at some times than others. The role and scope of the party have become far more visible under President Xi Jinping, but it was never absent.

Even in the early 2000s, politics underpinned social relationships and especially business ones. Like class in the United Kingdom, race in the United States, or caste in India, politics in China operated with an unspoken understanding. Arrangements that made no sense on the surface became clear when the CCP underpinnings were revealed. A seemingly useless company employee would turn out to be the son of the city’s party secretary, for example.

The CCP’s presence became far clearer in the countryside. In the city, advertisements and other signs drowned out propaganda posters. In rural areas, the reminders of the party’s role were constant, from stern instructions about the one-child policy pasted over roadside shrines and barn walls to injunctions to remember the CCP had lifted the area out of poverty.

To the outside world, the CCP often looked like an anachronism—a holdover that, optimists argued, would inevitably dissolve under the pressures of modernity and globalization. By the early 2010s, public anger at corruption, mixed with the increased coverage of local politics by bloggers and journalists, seemed to spell real problems for the party.

Under Xi, that came to an end, as internal party purges reduced the most blatant forms of corruption—at least for a few years—and the state cracked down on any form of civic society outside the party.

Today, the CCP is more in control at home than ever and more determined to enforce its censorship worldwide. But even as the party celebrates itself, it faces a dire reputation abroad, as more new polling shows. In 15 out of 17 developed countries surveyed, China’s unpopularity is at historic highs, with negative evaluations of Xi especially high and respondents strongly preferring economic ties with the United States.

As a result, the list of foreign officials who support the CCP touted ahead of the anniversary looks particularly unimpressive, including Belarusian dictator Aleksandr Lukashenko.

China’s nuclear expansion. The Washington Post reported Wednesday that China is building a huge nuclear launch site in Gansu, with more than 100 ICBM missile silos. This is a big deal: The country’s existing nuclear stockpile contains only 250 to 350 nuclear weapons. As Jeffrey Lewis points out in Foreign Policy, this doesn’t necessarily mean China is doubling the size of its arsenal. Silos are sometimes used for a shell game of missiles for extra security.

But the move is a significant escalation nevertheless—and one that puts extra urgency on Washington and Beijing returning to arms talks.

Hong Kong, one year on. This week also marks the anniversary of the introduction of Beijing’s draconian national security law in Hong Kong, and the city continues to descend into autocracy. The shuttering of the pro-democracy newspaper Apple Daily after the arrests of its leadership has had knock-on effects, with other sites pulling content and another columnist arrested as he attempted to leave the city.

Only 117 people have been arrested under the national security law, but Hong Kong institutions from universities to banks have radically changed their behavior radically out of fear. The government has set up tip lines for informers and told a nominally independent judiciary to get in line. In some ways, the situation is more fraught than on the mainland: In Hong Kong, learning how to walk the fuzzy line between tolerated behavior and danger zone is a new experience.

The coronavirus pandemic has also muted a major effect of the national security law: the exodus of Hong Kongers. Border and immigration closures in many popular destinations, such as Canada and Australia, have delayed the flight of liberal professionals—although tens of thousands of people have begun the process anyway. As the world reopens, expect those numbers to speed up considerably.

It’s unclear whether that means an actual outbreak. North Korea has publicly claimed zero COVID-19 cases, and the shuttering of the border has caused economic woes on the Chinese side. And while Pyongyang has rejected the idea of outreach to Washington, Beijing doesn’t seem keen to step in and help its often recalcitrant ally, either.

Diplomatic softening unlikely. Inside the Chinese government, there are more reports of discomfort with the vicious tone of diplomats and state media. But given that ambassadors have been rewarded for nationalist comments in the past, the rhetoric isn’t likely to ratchet down without a clear signal from the top. The state media’s latest line of attack is going after U.S. and Canadian treatment of Indigenous people, in a classic display of Soviet-style whataboutism.

The U.S. and Canadian governments both carried out genocidal actions against their native populations. But it’s ill-advised for Beijing to draw attention to that, given how state atrocities in Xinjiang echo those committed by Western countries, from the kidnapping of children to the destruction of native culture. Moreover, the West, unlike China, allows open discussion of its own history and advocacy on behalf of marginalized people.

Dragon man discovery. Chinese and Western media have excitedly described a remarkably intact early hominid skull found near the northern city of Harbin, China, in Heilongjiang (literally “Black Dragon River”). Headlines have dubbed the so-called dragon man as a new species, but that’s not the consensus among paleoanthropologists, who say the skull is more likely from an already known group, the Denisovans.

Human origins research is often mixed with nationalism in China, thanks to the shifting status of the so-called Peking man, once thought to be an ancestor of humanity but now considered by researchers outside China to be part of a subbranch. The Peking man’s skull was discovered in 1938 but hidden to preserve it during the Japanese invasion of China; it was rediscovered in 2018 based on family stories.

Coal deal refused. The Industrial and Commercial Bank of China, China’s biggest bank, has walked away from a coal mining deal in Zimbabwe. The striking move signals real change in Beijing’s policies, which have outsourced coal capacity to foreign countries while attempting to shrink coal power at home.

Beijing appears serious about fighting climate change, for the basic reason that its coastline, its unsteady ecological balance, and its hard-fought food security are all under threat.

Evergrande still shaky. China’s biggest property developer, Evergrande, says it has reduced its debts to a mere $88 billion and faces new limits on its ability to borrow. That hasn’t stopped its credit rating being downgraded. It’s unlikely that these woes are limited to Evergrande: The property market in China, where prices in major urban centers are worse than in the United States with far smaller national incomes—is out of control, and the gulf between new inventory and desperate buyers is growing wider.

Wuhan lab accounts. A firsthand account from the only Western researcher at the Wuhan Institute of Virology says she saw nothing out of the ordinary there before the coronavirus outbreak. I’ve heard several Western scientists criticize the Chinese facilities and institutes they’ve worked at, suggesting the researcher’s experience was genuinely positive. The eminent scientist Ralph Baric, however, continues to have concerns about the lab’s biosafety practices.

Meanwhile, Western academic publishing’s seeming unwillingness to take on China has stirred recent controversy. A senior editor of a prestigious genetics journal resigned over the refusal of journals to publish a call for an academic boycott over abuses in Xinjiang. Jeffrey Sachs, who is not a scientist and has been accused of CCP apologism, inexplicably heads the Lancet’s commission on COVID-19. 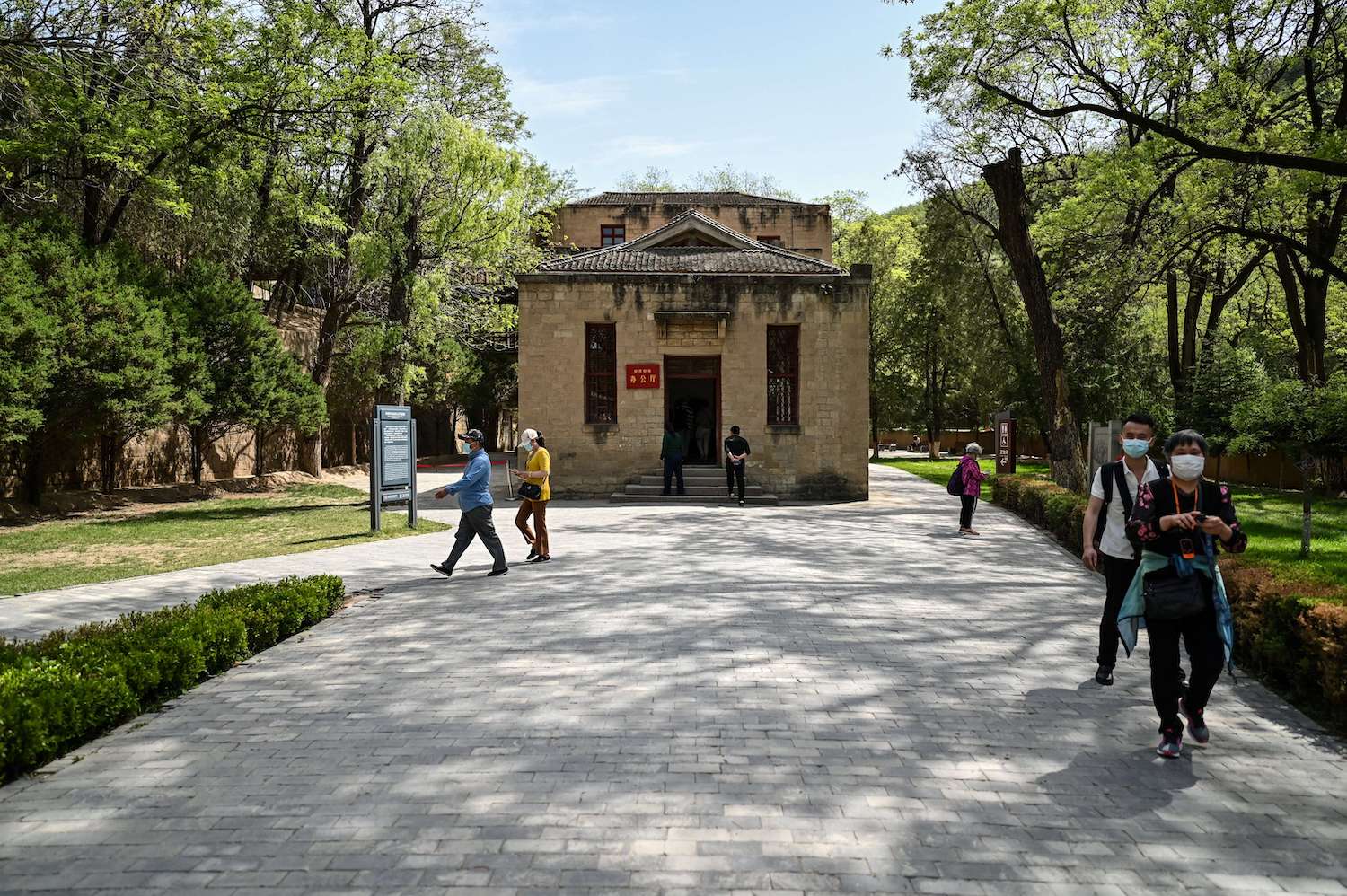 Tourists visit the Yangjialing Revolutionary Site in Yan’an, the headquarters of the Chinese Communist Party from 1936 to 1947, in Shaanxi province on May 10.HECTOR RETAMAL/AFP via Getty Images

Yanan is famous for one thing only: being the headquarters of the CCP between 1935 and 1947, after the then-militant group was driven out of the lowlands by the Nationalist Party and underwent the Long March to refuge.

Sitting high on the Loess Plateau and depopulated after droughts in the 1930s, Yanan offered an isolated fortress from which to direct operations in the rest of China. It was also the site of considerable scheming and infighting within the CCP, as well as mass opium production that provided 40 percent of the trade revenue (even as the party preached anti-drug policies).

Today, Yanan is a remote backwater still plagued by poor soil and bad weather. State media declared the city “lifted out of poverty” two years ago. So-called red tourism to sites used by the party in the past remains a source of revenue, but it’s not as popular as easier-to-reach sites such as Mao Zedong’s home village in Hunan and fellow revolutionary Liu Shaoqi’s home village. (Mao had Liu arrested and killed in the early years of the Cultural Revolution.)