The highlights this week: Tigrayan forces retake the region’s capital as Ethiopia announces a cease-fire, Jacob Zuma is sentenced to 15 months behind bars, and a Chinese-backed data center marks a new phase in Senegal’s tech and information industry.

The highlights this week: Tigrayan forces retake the region’s capital as Ethiopia announces a cease-fire, Jacob Zuma is sentenced to 15 months behind bars, and a Chinese-backed data center marks a new phase in Senegal’s tech and information industry.

As ballots were counted in Ethiopia’s election, the conflict in the northern Tigray region took a dramatic turn. On Monday, the Tigray Defense Forces retook the regional capital, Mekele. They were reportedly met with cheering crowds as officials appointed by Prime Minister Abiy Ahmed’s federal government fled Tigray.

A statement attributed to the government of the regional state of Tigray pledged the region will “indeed be the graveyard (and not a free ground for atrocities) of the unjust and unholy coalition of invading forces.”

A cease-fire declaration by the federal government in Addis Ababa contradicted a victorious statement by rebel forces in Tigray, who vowed to fight on. “Until all our enemies leave Tigray, we will fight,” Liya Kassa, a Tigray People’s Liberation Front (TPLF) spokesperson, declared.

Rebel victory. Rebel control of Mekele is both strategically and psychologically significant. In late November 2020, Abiy announced the conflict was moving into a “final phase” as the Ethiopian National Defense Force, aided by Amhara militia members and Eritrean troops, prepared to seize the TPLF stronghold.

While Abiy declared victory and for several months denied the presence of Eritrean forces in the country, fighting in the region continued. An information blockade in the region made it difficult to ascertain the number of casualties on both sides.

Just two days after Ethiopians voted on June 21, reports began to emerge of a devastating airstrike on a busy market in Togoga, less than 20 miles from Mekele. At least 64 people were killed and nearly three times as many injured in an attack the Ethiopian army said was targeted at rebel fighters. The attack prompted World Health Organization Director-General Tedros Adhanom Ghebreyesus, who is Tigrayan, to wade into the debate, tweeting “Evil,” as he quoted news reports from the fighting.

TPLF fighters retaliated, reportedly shooting down Ethiopian fighter jets and seizing territory south of Mekele once controlled by Eritrean soldiers. In their statement on Monday after retaking Mekele, the self-described government of Tigray vowed to “stay vigilant, relentless and on constant alert until Tigray is fully free of all invading forces.”

Unilateral cease-fire. It was a sharp contrast to the Ethiopian government’s declaration of an immediate “Unilateral Humanitarian Ceasefire,” enacted after consultations with academics, the business community, and religious leaders in Tigray, according to a June 28 statement from the federal government.

The Ethiopian government presented the cease-fire as a response to the suffering of the Tigrayan people. “Battling desert locust, the COVID19 pandemics, the displacement and interruption of farming activities due to the criminal clique’s instigation of violent conflict have left many in the region exposed to untold suffering,” the statement read.

The statement seemed to be in line with Abiy’s gradual public shift, which acknowledged a report by the Ethiopian Human Rights Commission on atrocities in the region and made promises regarding the withdrawal of Eritrean troops.

Abiy has also pressed forward with long-delayed elections, in a bid to show that the country was in fact the democracy he promised to introduce as he rode a wave of public support to office and a Nobel Peace Prize. Despite his efforts, it has been impossible to look away from the violence in Tigray.

“Man-made disaster.” In the months since the conflict started last November, Tigray has become a humanitarian crisis, in part due to an aid blockade. More than 350,000 people are facing a famine, with aid agencies accusing Ethiopian and Eritrean soldiers of using food as a weapon in what is turning into what humanitarian workers described as a “man-made disaster.”

The United Nations and other agencies have repeatedly lobbied for access to the region, but even as a humanitarian corridor was allowed in principle, in practice aid workers could be as vulnerable as the populations they are trying to assist. Last week, Doctors Without Borders said three of its staff were killed in a “brutal murder” in Tigray.

Wednesday, June 30: The Democratic Republic of the Congo celebrates 61 years of independence from Belgium. 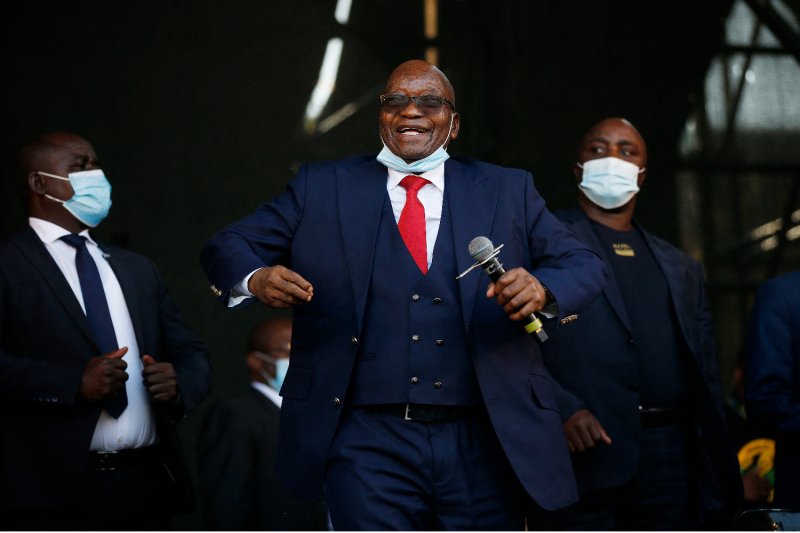 Former South African President Jacob Zuma dances onstage before addressing his supporters following the postponement of his corruption trial outside the Pietermaritzburg High Court in Pietermaritzburg, South Africa, on May 26.PHILL MAGAKOE/AFP via Getty Images

Jacob Zuma sentenced. South Africa’s highest court sentenced former President Jacob Zuma to 15 months in prison, ruling that he was in contempt of court for refusing to appear before a judicial inquiry on corruption during his tenure. In a scathing ruling on June 29, the Constitutional Court described Zuma’s behavior as “scandalous” and “peddling his disdain” for the country’s laws.

Zuma, consistently defiant, has in the past stated he is willing to go to prison. He refused to appear at the corruption inquiry earlier this year, accusing the justice heading the inquiry of having a personal vendetta against him.

The justice, appointed by Zuma himself while he was president, dismissed the accusation, adding that Zuma was the first of a high-profile parade of more than 250 witnesses to refuse to appear before the commission. The Constitutional Court said Zuma failed to provide any evidence of his claims.

Zuma now has five days to hand himself over to police—if he does not, police are compelled to arrest him. The court ruled that the judgement could not be appealed.

It’s no mistake that such a crucial decision is couched in such noncommittal language—just what this force will look like, who will command it, and who will pay for it is still unclear. In the meantime, attacks by Islamist insurgents have left more than 2,800 people dead and displaced 800,000.

A coup verdict in Ivory Coast. Guillaume Soro, a former rebel chief and erstwhile supporter of Prime Minister Alassane Ouattara, was sentenced to life in prison. The June 23 verdict found Soro guilty of plotting a coup against the current prime minister.

During the post-2010 election violence, Soro led a rebel group that helped Ouattara seize power from his rival Laurent Gbagbo. He was rewarded with cabinet positions, including speaker of the national assembly. Yet, as Ouattara consolidated his power toward a third term, he accused the ambitious Soro of mutiny, barring him from competing in the 2020 election. The criminal charges forced Soro into exile to Europe and led to his current conviction.

Nigeria’s presidential health. Nigeria’s President Muhammadu Buhari was meant to travel to the United Kingdom for medical treatment last week—to treat a condition that remains largely mysterious to the public. Without much explanation, Buhari’s aides announced that the trip was postponed while the public at home grappled with a looming doctors’ strike and poor hospital conditions.

Buhari has traveled to London several times for health reasons, prompting public outrage and a lawyer to sue Buhari for his medical trips abroad, arguing the president was violating Nigeria’s National Health Act when he traveled as a public officer for a medical checkup without referral by the country’s medical board. Reports of Buhari’s trip have already sparked outlandish rumors, pointing to low levels of trust between the administration and the public.

The African National Congress’s promises. As South Africans head toward a local government election, in which they will elect the municipal officials in charge of service delivery, it is worth looking back at the promises made by the country’s ruling party in previous campaigns.

The fact-checking organization Africa Check looked at several promises made over the last decade, including on housing, health care, and education. Assessing nine promises made in the 2014 ANC manifesto, only one—to build two new universities—was kept.

This Week in Technology

Senegal’s China-backed data center. Senegalese President Macky Sall unveiled a new data center outside of the capital, Dakar, on June 22. On Sall’s instruction, government departments will migrate their data to the new center, as will state-owned companies like electricity supplier Senelec. Optimistically, the new center will also support Senegal’s burgeoning tech sector. “We have to rapidly repatriate all national data hosted out of the country,” the Senegalese president said.

The new finance center was funded by a Chinese loan and built by Chinese tech giant Huawei. As Eric Olander, managing editor of the China Africa Project, put it, the data center is significant because it shows some African governments are happy to fully replicate the Chinese model on information and data. It also shows Sall’s willingness to embrace China in order to secure greater independence from Western powers, particularly France and the United States.

“Macky Sall embraced everything that the U.S. government opposes about China: 1) the role of Huawei, 2) Chinese lending, and 3) a democracy aligning itself with Beijing’s governance model, at least in terms of data management,” Olander wrote.

Nigeria’s generational clash. The Yoruba word agbaya, meaning “bad elder,” captures the widening gap between Nigeria’s ageing political elite and its frustrated Generation Z. That chasm was clear during the 2020 #EndSARS protests and will continue to shift the political landscape in a country where 70 percent of the population is younger than 35. “The new generation’s discontent with agbaya leaders could usher in another era of reform,” journalist Nosmot Gbadamosi writes in Foreign Policy.

Museveni’s anti-LGBT crackdown in Uganda. As the rest of the world celebrates Pride, Uganda’s President Yoweri Museveni continues to stoke deadly homophobic sentiments, with his security forces cracking down on LGBT shelters, because, as feminist writer Rosebell Kagumire and legal advocate Godiva Akullo argue for Al Jazeera, “the mix of morality and nationalist rhetoric, even at face value, works as glue in the growing cracks in his political support base.”