The Time Chinese Diplomats Were Sent to the Camps

In 1968, officials faced purges and exile.

By Peter Martin, a journalist and author of China’s Civilian Army: The Making of Wolf Warrior Diplomacy.
July 1, 2021, 2:43 PM

When reports first emerged that China was imprisoning up to 1 million Uyghur Muslims in so-called reeducation camps in its far western region of Xinjiang, the country’s foreign ministry dismissed them as “completely untrue.” Before long, though, as evidence and international condemnation mounted, Chinese diplomats began touting the system as a model for the rest of the world to emulate, even hosting trips for foreign diplomats and journalists to the region.

Both of these official responses omitted an important but largely overlooked point: Within living memory, thousands of Chinese diplomats were themselves held in comparable camps at the height of Mao Zedong’s Cultural Revolution. The experience was scarring and often deeply humiliating for many of the Chinese envoys shipped off to the camps. For some, it even shook their faith in the Communist Party’s teachings.

When reports first emerged that China was imprisoning up to 1 million Uyghur Muslims in so-called reeducation camps in its far western region of Xinjiang, the country’s foreign ministry dismissed them as “completely untrue.” Before long, though, as evidence and international condemnation mounted, Chinese diplomats began touting the system as a model for the rest of the world to emulate, even hosting trips for foreign diplomats and journalists to the region.

Both of these official responses omitted an important but largely overlooked point: Within living memory, thousands of Chinese diplomats were themselves held in comparable camps at the height of Mao Zedong’s Cultural Revolution. The experience was scarring and often deeply humiliating for many of the Chinese envoys shipped off to the camps. For some, it even shook their faith in the Communist Party’s teachings. 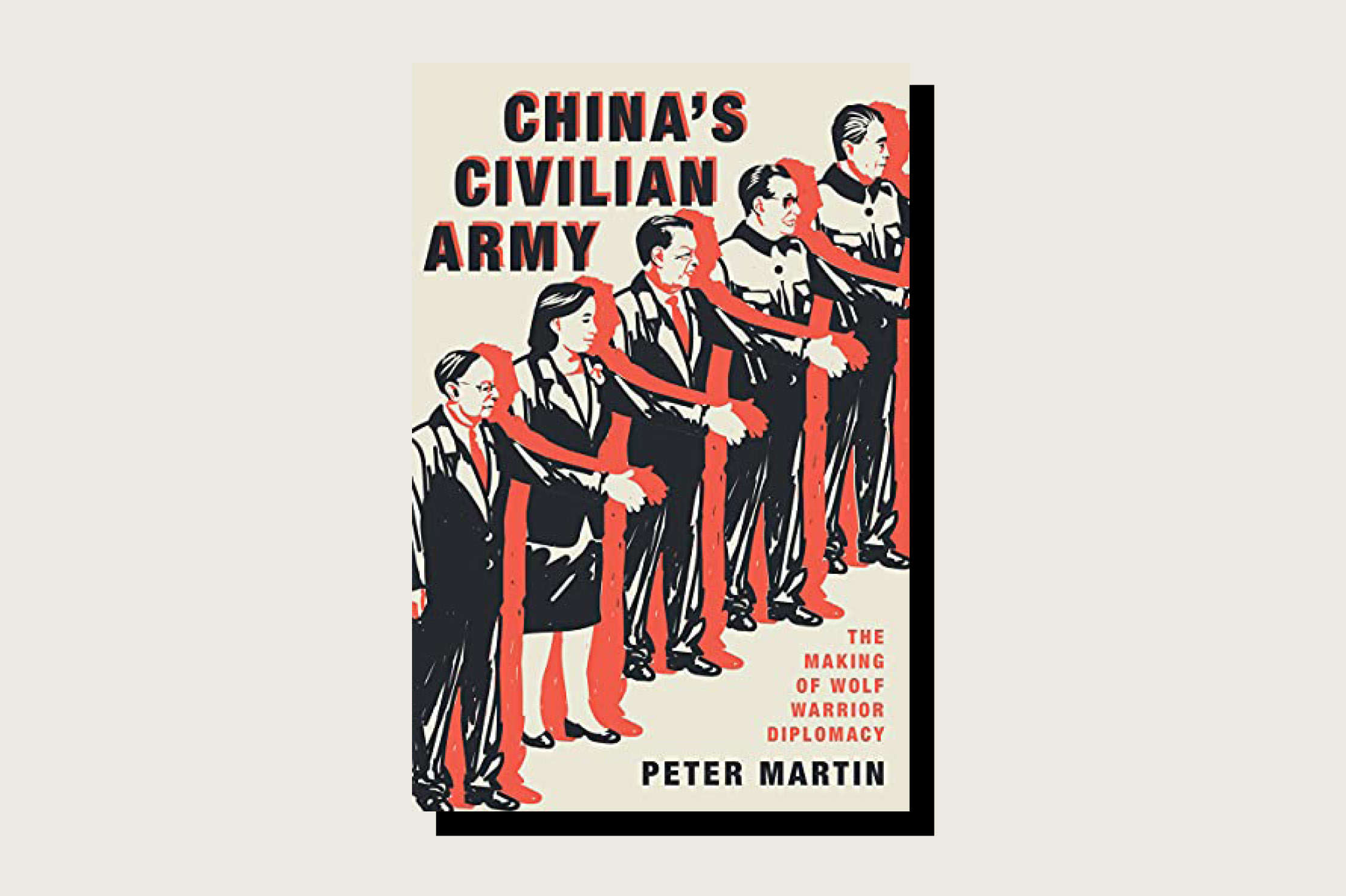 In 1968, the party began establishing what it called reeducation camps all across China to rewire the thinking of the country’s bureaucrats. Named “5.7 cadre schools” after the May 7 date on which Mao gave the order, between 70 and 90 percent of central government employees—including China’s diplomats—were sent to study at these so-called schools, which were in effect labor camps. When they arrived, with no knowledge of what might come next, many diplomats assumed they would spend the rest of their lives in the countryside.

The 30-year-old diplomat Zhang Bing was sent to one such camp in the spring of 1969. Born in a rented cottage in a northern Chinese village, she dreamed of one day seeing the ocean, perhaps even the world. She taught in a middle school after graduating from college, but when her husband joined the foreign ministry in 1965, she began studying in her spare time, even taking her 3-month-old baby to lectures. After just a year of preparation, she was accepted by the ministry.

When she left on the train for Beijing with her child in her arms, Zhang imagined a future there and in capitals around the world. Instead, after just a few years in the ministry, she’d been shipped off to the Foreign Ministry 321 Cadre School in Taiping village in Heilongjiang province, which borders Siberia. Some 500 foreign affairs cadres were sent to Taiping and the neighboring villages, including teams from the foreign ministry, the Diaoyutai State Guesthouse, the foreign ministry’s in-house think tank, and its publishing house.

Twenty people were crammed into Zhang’s dormitory. They shared two large kang beds—hard, heated platforms used to stave off the biting winters of northern China. Zhang and her colleagues covered the platforms in straw to soften the surface and put up a curtain to separate men and women. Nighttime was difficult as colleagues snored, farted, slapped mosquitoes, and talked in their sleep. They worried about wolves.

The days were harder. They toiled in the fields and built bridges, roads, and homes for locals. The work was grueling, and none of them knew what they were doing. When they weren’t laboring, Zhang and her colleagues engaged in reeducation and self-criticism sessions where they would study Mao’s works and dissect the shortcomings of so-called revisionist thought.

The work was especially tough for older diplomats, who were often injured in the process. One prominent veteran revolutionary and social scientist, Chen Hansheng, was forced to deliver newspapers and clean the school’s toilets. He was so shortsighted that he had to press his face up against the excrement-covered surfaces in order to clean them.

The food was terrible. Lacking fresh produce, the diplomats ate whatever salted vegetables were available. On special occasions, they ate bean sprouts. Some suffered diarrhea and others serious constipation. Most avoided taking laxatives in order to avoid spending too much time around—and perhaps falling inside—the open pit toilet filled with maggots.

But amid the adversity, there were little moments of joy. A future ambassador, Shi Wushan, managed once to smuggle a can of meat into the camp. Once he and his friends had devoured its contents, Shi filled the can with stones and threw it into the river to hide the evidence. Displays of loyalty to Mao could win rewards: One of Zhang’s colleagues obtained an accordion that Red Guards had stolen from the home of Vice Minister Ji Pengfei to play music venerating the chairman. Her colleague was permitted to leave the camp to perform in nearby towns and villages.

By November 1969, China’s tense relationship with the Soviet Union and the cadres’ inability to grow anything in the fields of northern China saw Zhang’s whole camp uprooted and sent to Mao’s home province of Hunan.

Her story was not unusual. Another diplomat at a camp in Hubei remembered colleagues suffering from malnutrition after eating carrots for every meal. They drank water from a hole next to the public toilet, which would overflow when it rained; they once killed a dog for its meat. At some camps, diplomats were used in place of oxen to pull plows. One vice minister, Chen Jiakang, even died at a 5.7 school.

Occasionally, Zhang and other colleagues were called back to the ministry when extra staff were needed. But even these brief moments of reprieve could be humiliating. When Zhang was called back to staff a banquet for Pakistani dignitaries in Beijing, she served pork to the guests. No one had ever told her that Muslims didn’t eat the meat. “I didn’t even have the most basic diplomatic knowledge,” she wrote later. “I embarrassed the foreign ministry and embarrassed the Chinese people!”

In 1971, the camps began to be dismantled. Zhang stayed on until 1972, when she fell ill and was sent to Beijing. A few months later, when she was assigned to train for a new job in the ministry, she felt as if she had nothing to contribute. “If they sent me back to the foreign ministry, what could I do?” she asked herself. “How can someone who can only shout slogans, write big character posters, and do manual work in the fields be a diplomat?”

Zhang was by then 34 years old and six months pregnant. “In a flash, six years had gone by, and the golden years of my life had pointlessly drifted away,” she wrote. For her and many millions of other young Chinese, the Cultural Revolution raised painful questions about the new society they’d been told they were building.

Zhang went on to serve in diplomatic posts in Sweden, Canada, and New Zealand, traveling widely and fulfilling her dream of seeing the world. Still, her experience in the camps left her with an uneasy feeling. “I’ve thought about it hundreds of times,” Zhang wrote after her retirement. “Is history true, or is it just a story? As a regular party member, how should I treat the party’s history?” She looked back at the slogans she had been told as she’d headed out to the 5.7 school: “‘The 5.7 soldiers are glorious.’ ‘The 5.7 road is heroic.’ These were all lies to trick people,” she wrote.

Mao, of course, felt differently. “The foreign ministry was a mess. Control was lost for a month and a half, and power was in the hands of the counterrevolutionaries,” he later recalled. “Most of it was good, but there were some bad people.” In any case, Mao’s mind was focused on other things at the time: While Zhang and others had languished in the countryside, Chinese diplomacy had moved on without them.

Peter Martin is a journalist and author of China’s Civilian Army: The Making of Wolf Warrior Diplomacy, published by Oxford University Press.

The Chinese Communist Party Has Always Been Nationalist

China’s quest for rejuvenation dates back more than a century.