A Razed Building and Another Possible Flash Point in East Jerusalem

JERUSALEM—One of the last times Israelis clashed with Palestinians in Jerusalem, it led to a war with Gaza and the deaths of hundreds of people. That was in May, when Jewish settlers sought to expel Palestinians from their homes in the East Jerusalem neighborhood of Sheikh Jarrah and, later, when police stormed Al-Aqsa Mosque.

Now, the flash point appears to have moved to Al-Bustan, another neighborhood of East Jerusalem, where the spark isn’t an ownership dispute—as it was in Sheikh Jarrah—but a different long-festering issue: Israel’s policy of denying most building permits to Palestinians.

For years, residents there have been fighting demolition orders issued by the Jerusalem municipality on buildings that Palestinians say they had no choice but to put up without proper authorizations. 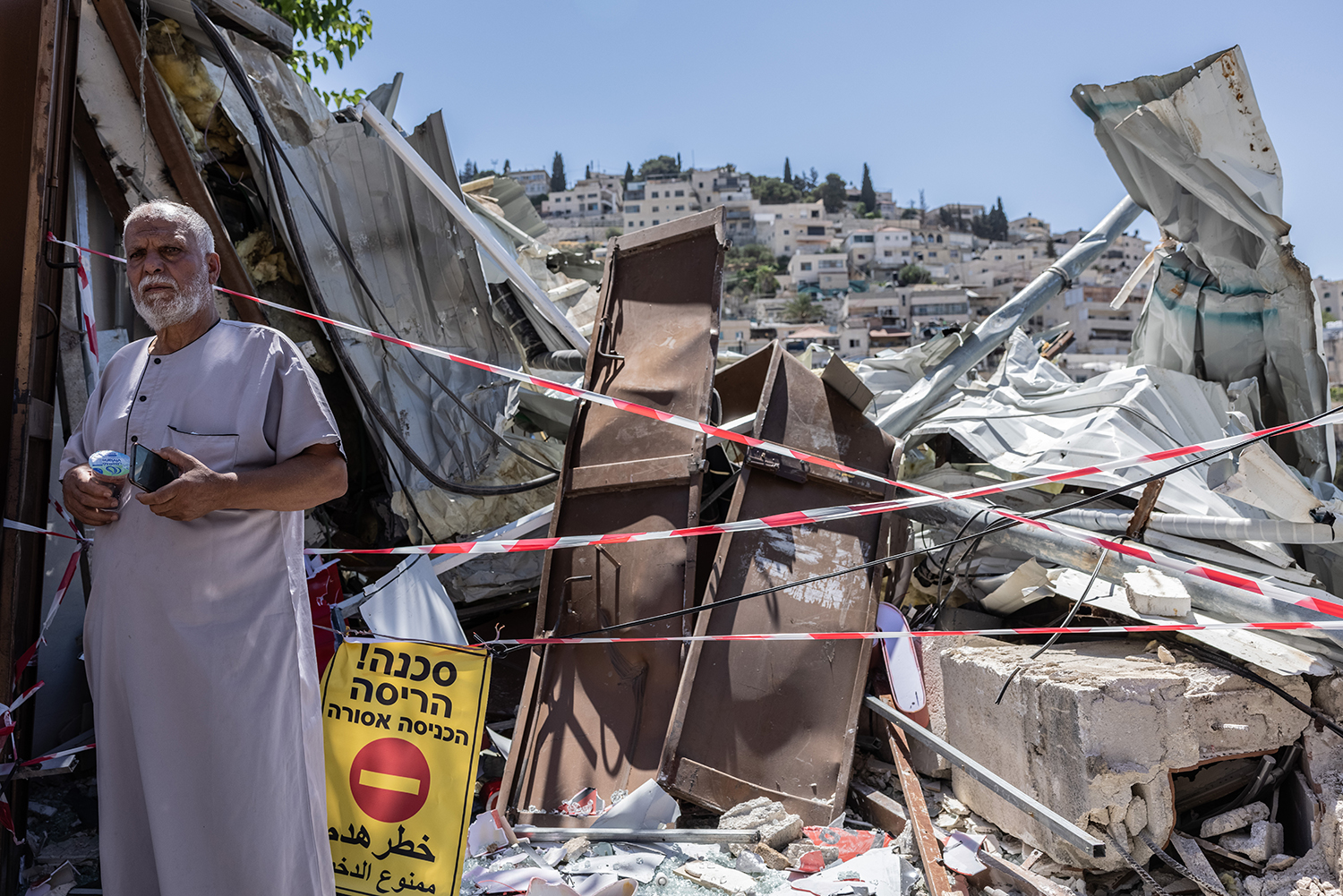 A man stands outside the ruins of Nidal al-Rajabi’s house in East Jerusalem on June 29. Stefanie Glinski for Foreign Policy

JERUSALEM—One of the last times Israelis clashed with Palestinians in Jerusalem, it led to a war with Gaza and the deaths of hundreds of people. That was in May, when Jewish settlers sought to expel Palestinians from their homes in the East Jerusalem neighborhood of Sheikh Jarrah and, later, when police stormed Al-Aqsa Mosque.

Now, the flash point appears to have moved to Al-Bustan, another neighborhood of East Jerusalem, where the spark isn’t an ownership dispute—as it was in Sheikh Jarrah—but a different long-festering issue: Israel’s policy of denying most building permits to Palestinians.

For years, residents there have been fighting demolition orders issued by the Jerusalem municipality on buildings that Palestinians say they had no choice but to put up without proper authorizations.

The municipality had agreed to freeze the demolitions while residents tried to advance a plan that would legalize the construction retroactively. But the municipality reversed the agreement last year, and, this week, police entered Al-Bustan with a bulldozer, demolishing a butcher shop and detaining the building’s owner. 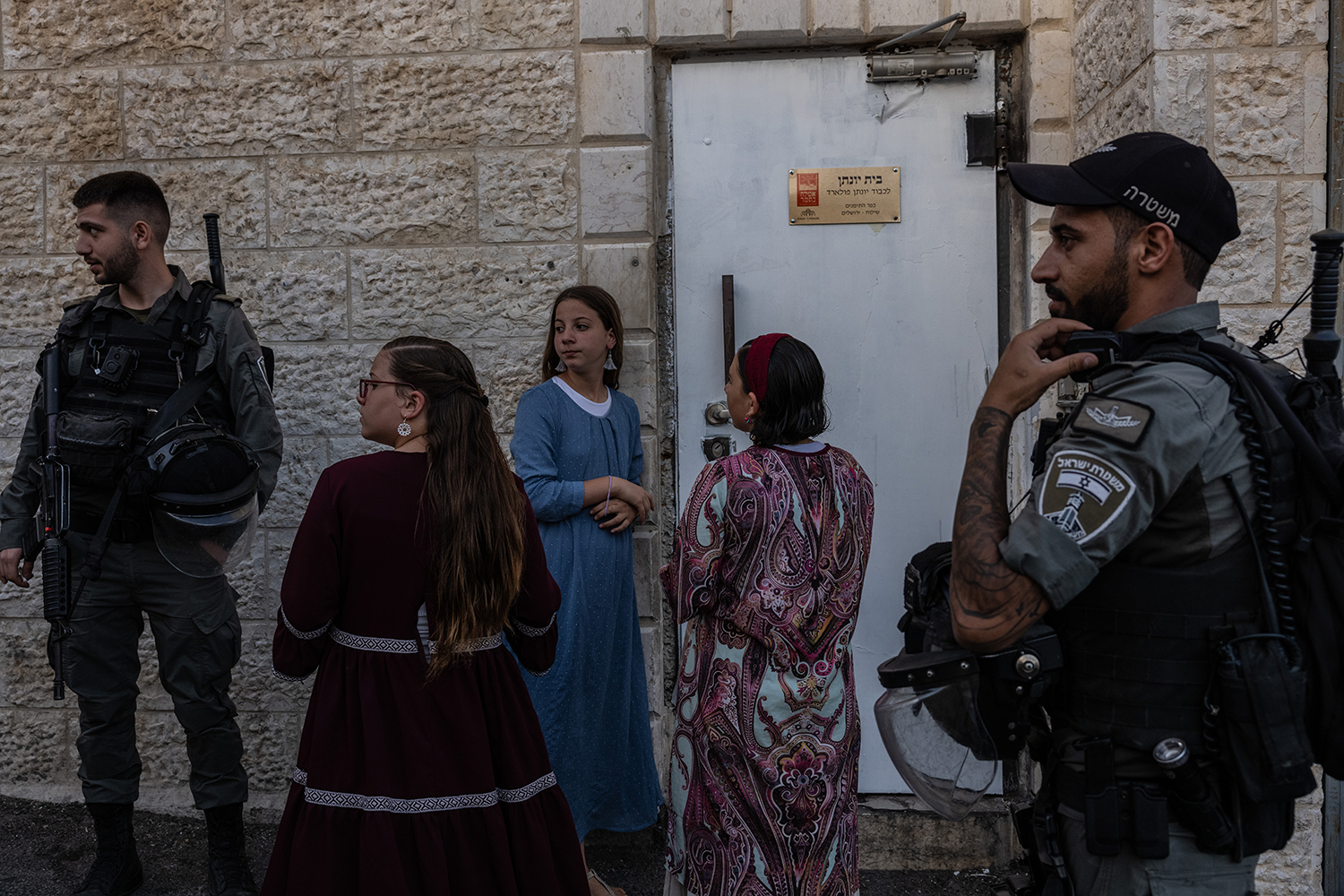 Jewish settlers who have moved to the Batan al-Hawa neighborhood are seen under police protection on June 14. Stefanie Glinski for Foreign Policy

The incident prompted clashes in the neighborhood, with police firing tear gas and rubber bullets into the crowd, injuring 13 people. Later in the evening, further protests and clashes erupted, leaving many more injured.

Nidal al-Rajabi, the building’s 46-year-old owner, said on his release that he had received an order to demolish his shop within 21 days on the grounds that he had built the house without the necessary authorizations. Rajabi told Foreign Policy that he owns the land in question but that it was “nearly impossible” for Palestinians to receive building permits from the municipality. 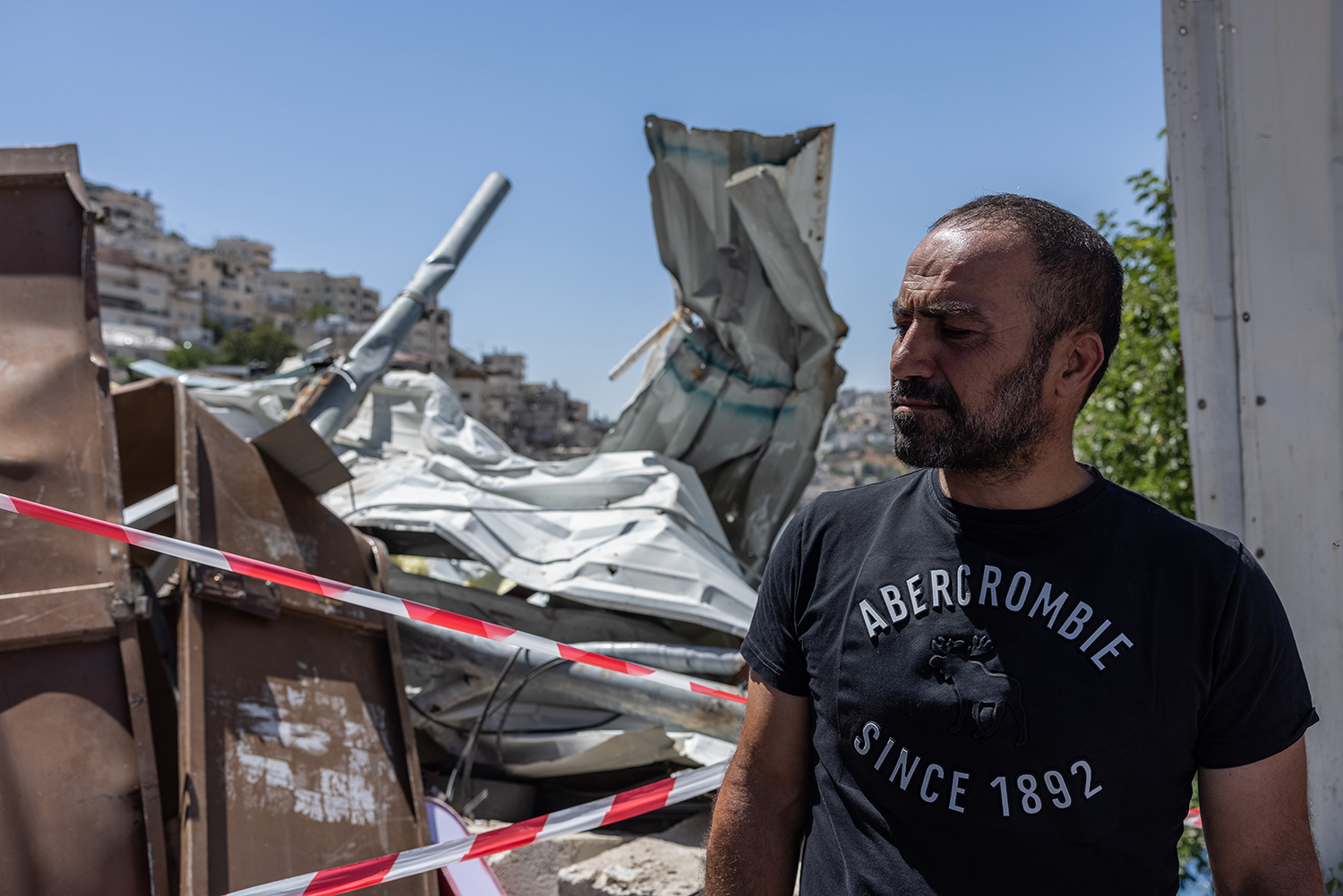 Rajabi, the owner of the destroyed building, on June 29. Stefanie Glinski for Foreign Policy

His building is one of 20 in Al-Bustan under final demolition orders, meaning that all legal options to suspend the court’s judgment have been exhausted, according to the Israeli rights group Ir Amim. Israel plans to build a touristic park on the site of the houses.

According to a U.N. report, Israeli authorities demolished or seized at least 292 Palestinian-owned structures across the occupied West Bank, including East Jerusalem, in the first quarter of this year, a 121 percent increase compared with the same period last year. The demolitions displaced some 450 people.

Residents of Al-Bustan, which is part of the greater Silwan neighborhood in East Jerusalem, say they hired Israeli planners to map out a zoning plan for the area, which would have included the official registration of their houses. But authorities rejected the proposal.

Amy Cohen, the director of international relations and advocacy at Ir Amim, told Foreign Policy that Israeli authorities had deemed more than 100 residential structures in Al-Bustan as “unauthorized.” Those structures are under threat of being razed, potentially displacing around 1,500 Palestinians.

Israel captured East Jerusalem in the 1967 war and has since confiscated about one-third of its land to build settlements—which the international community considers to be illegal. Most Palestinian neighborhoods of East Jerusalem remain underdeveloped and lack updated zoning plans, making it difficult for landowners to obtain building permits.

Asked about the policy toward Palestinians, a Jerusalem municipality spokesperson said the demolition orders were “issued by virtue of the law against construction offences.”

“Unfortunately, the residents’ representatives did not comply with the agreements reached with the municipality and rejected all the proposals presented to them,” the spokesperson told Foreign Policy. “The court therefore came to the conclusion that it is not possible to continue freezing the situation on the ground and ordered the execution of the orders.”

But Cohen of Ir Amim described the denial of permits as a “mechanism of displacement.”

“Palestinians are essentially not able to build on their land in an authorized manner, which subjects their homes to demolition, driving them out of the city. And while Israeli law grants Jewish people the right to reclaim any land they owned in East Jerusalem prior to 1948, the same right is not afforded to Palestinians who lost properties in West Jerusalem or other parts of the State of Israel.”

Rajabi told Foreign Policy that authorities had imposed a $6,000 fine to cover the cost of the demolition.

“No one here will demolish their own houses,” said Amani Odeh, a 34-year-old dentist and activist whose house is one of the structures at risk of demolition. “My family has lived here for generations. We are not leaving.”

In Silwan’s Batan al-Hawa neighborhood, across the hill from Al-Bustan, residents live under a different threat: eviction. 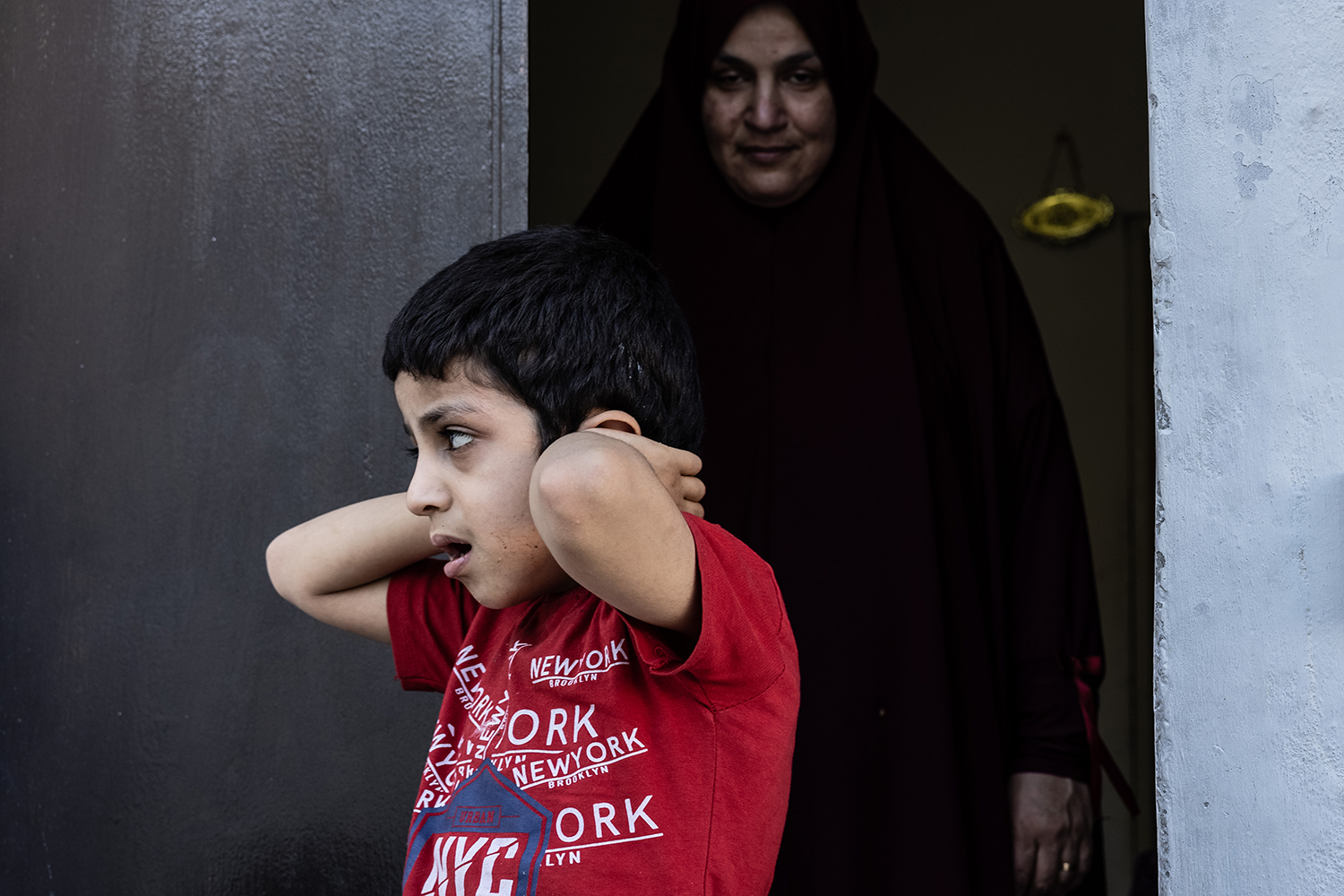 Eight-year-old Mohammed in Al-Bustan on June 14. Almost daily escalations have scared the boy, who has autism—he rarely ventures outside his home. Stefanie Glinski for Foreign Policy 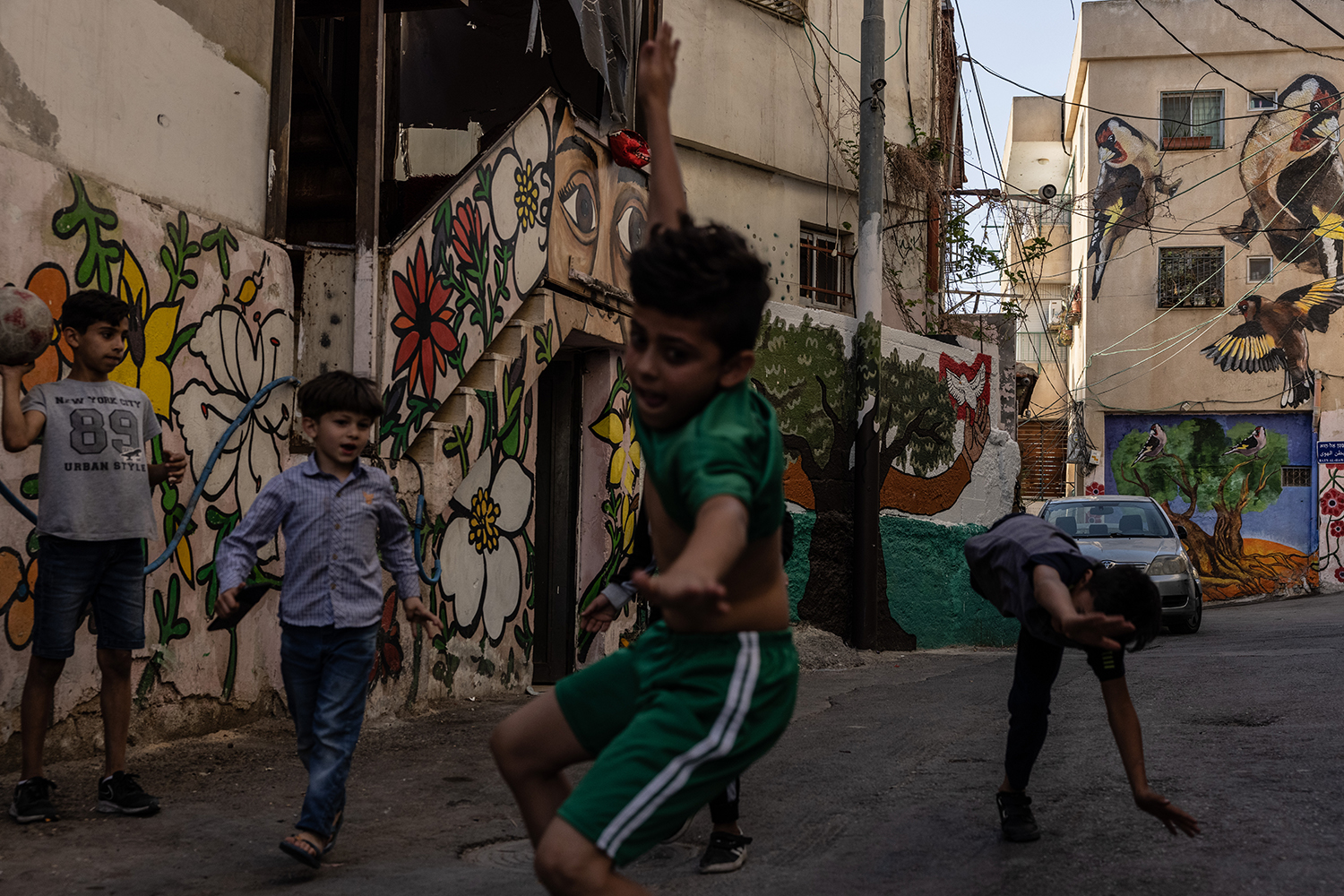 According to the rights group B’Tselem, 14 Palestinian families have been evicted there so far in ownership disputes with settlers.

The houses, purchased by Palestinians during the Jordanian rule of East Jerusalem before 1967, have been taken over by settlers affiliated with the group Ateret Cohanim, which claims the land was designated for Jews who immigrated long ago from Yemen. The group works through the Israeli courts to seize homes from Palestinians or quietly buys properties, often through middlemen. 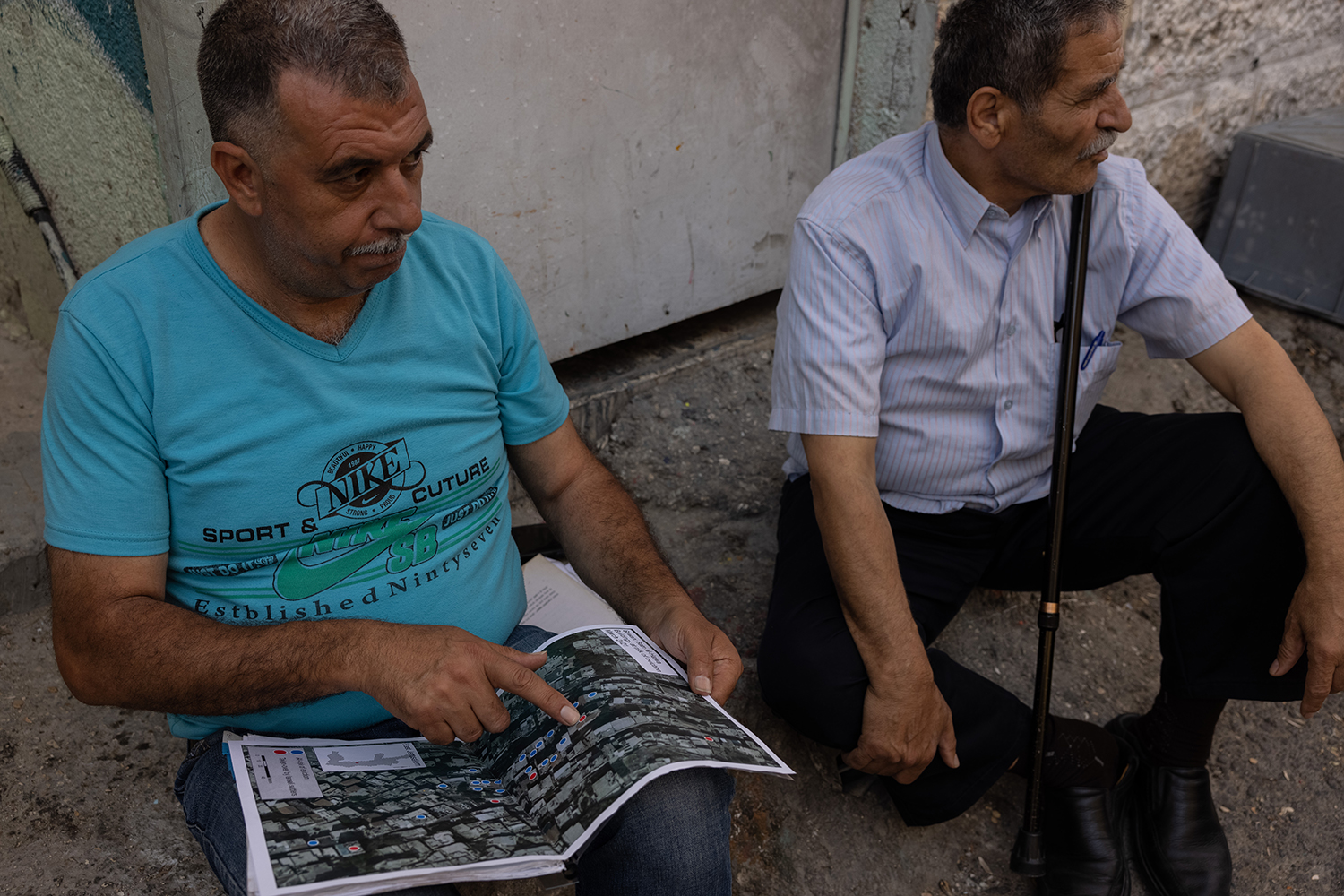 Zuhair al-Rajabi sits with a map outside his house in East Jerusalem on June 11. The map shows home evictions that have already gone through—and others that are threatened. Stefanie Glinski for Foreign Policy

Zuhair al-Rajabi, a 50-year-old father of four and distant relative of Nidal al-Rajabi, said he is awaiting the final court decision on his family’s eviction order.

Sitting outside his home, its walls covered in colorful murals, he pulled out a U.N.-produced map depicting the houses that have already been annexed—and those that might be next, including his own.

Rajabi’s family purchased both the land and the house on it in 1966, when East Jerusalem was under Jordan’s rule; he said the previous owner was also Palestinian.

“I fear that Palestinians aren’t on the winning side here, but regardless of the outcome, even if my house is attacked, I will not leave and cannot leave. Where would I go? This is the only home I have.”