Historic Droughts Drive Up Prices in Mexico and Brazil

Historic dry spells are straining life and business in the two countries, where presidents are aloof to climate change.

The highlights this week: Mexico’s and Brazil’s presidents are aloof to climate change even as historic droughts are poised to drive up prices, recommendations for rekindling Latin American regionalism, and Venezuela lifts an election ban on an opposition alliance.

The highlights this week: Mexico’s and Brazil’s presidents are aloof to climate change even as historic droughts are poised to drive up prices, recommendations for rekindling Latin American regionalism, and Venezuela lifts an election ban on an opposition alliance.

When Mexico’s central bank hiked its interest rates last week, it cited the ongoing drought as a major inflation risk. Meanwhile, Brazil’s inflation has risen to over 8 percent annually amid drought-induced food and electricity price increases.

Inflation is just one hardship that droughts are currently causing in the two countries and their neighbors: Lack of rain is also driving crop loss, migration, and more severe forest fires.

The droughts and all their consequences are exacerbated by rising temperatures as well, which makes it all the more grave that Mexico’s and Brazil’s presidents continue to display a lack of seriousness about climate change.

Mexico’s reforestation questioned. Mexican President Andrés Manuel López Obrador suggested in May that one remedy to the country’s historic drought—which is the worst in 30 years in Mexico City, according to its mayor—is his flagship environmental program Sowing Life, in which rural workers are paid to plant trees. In some cases, however, the program’s beneficiaries are cutting down trees in order to replant and receive payments. The NGO World Resources Institute estimates that this may have caused forest loss nearly the size of New York City in the program’s first year.

López Obrador talked up the program at a virtual climate summit hosted by U.S. President Joe Biden in April, but chose not to stay online for most of the summit’s presentations. Under his leadership, a long-delayed water law that will define which agencies are responsible for providing water to different parts of the country has languished in Congress. More broadly, he has embraced coal-fired power plants and other fossil fuels in a massive electricity sector reform. 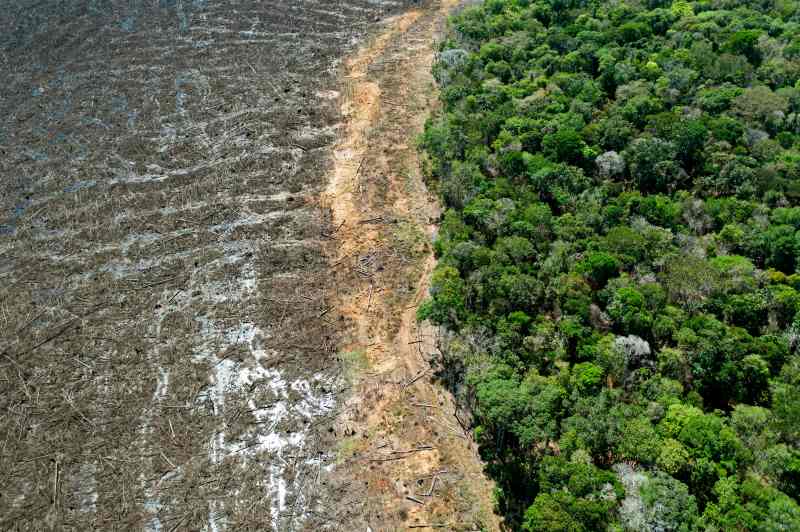 Brazil’s drought-deforestation spiral. Several Brazilian states are experiencing their worst drought in at least 90 years, with five predicted to face chronic water shortages by September. While lower-than-average rainfall is partly due to climate change and the La Niña weather pattern in the Pacific Ocean, many Brazilian scientists believe it is also linked to Amazon deforestation: Humid air from the Amazon region normally flows southward in a phenomenon Brazilian scientist Jose Marengo named “flying rivers.” Less forest means less humidity to begin with.

Compounding the cycle, drier land means that fires set by people who cut down the rainforest become harder to extinguish. And tree felling in the Amazon is on the rise: March, April, and May each topped previous deforestation records for those months since the National Institute for Space Research started using its current tracking method in 2016. This is despite the fact that in April, President Jair Bolsonaro sent a letter to Biden committing to end illegal deforestation by 2030 (the vast majority of deforestation in the Amazon is illegal, studies have found).

The difficulty of spurring action. Brazil’s Amazon fire season begins this month, so international headlines about forest destruction may increase pressure on Bolsonaro. Even so, both he and López Obrador have often simply railed against criticism of their policies from abroad, refusing to correct course. Writing in Foreign Policy, the Wilson Center’s Benjamin Gedan suggests that multilateral work toward an environmental treaty at this year’s Summit of the Americas could move countries, including Mexico and Brazil, toward more climate-friendly paths.

Monday, July 5: Venezuela is due to be discussed at the U.N. Human Rights Council.

Cleared to run in Venezuela. The Venezuelan government lifted a 2018 ban on the opposition coalition Democratic Unity Roundtable’s participation in elections. Under the ban, candidates could run in individual parties but not represent the coalition.

Brazil’s COVID bribes. Bolsonaro fired a health ministry official who reportedly sought a one dollar per dose bribe in a vaccine deal. A day earlier, Brazil suspended a $321-million vaccine purchase deal after allegations that a former health ministry employee was pressured to sign a contract that would vastly inflate the price of the doses. 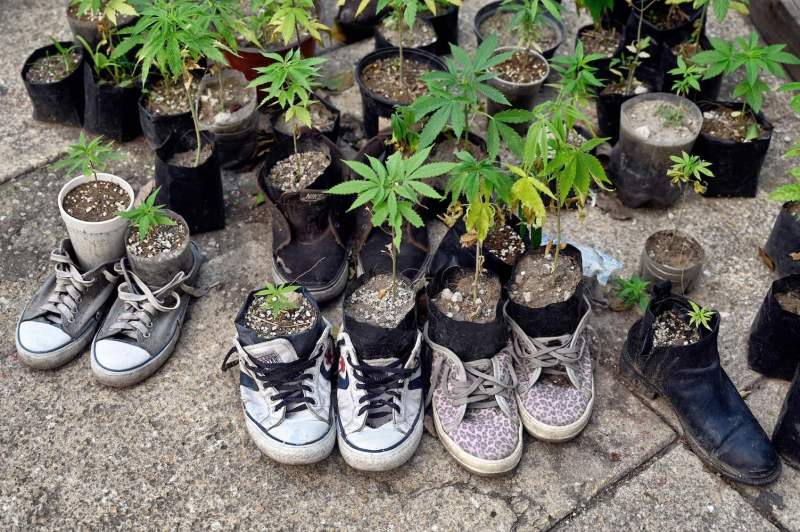 View of cannabis plants in flower pots inside shoes outside the Senate building in Mexico City on Sept. 30, 2020. Alfredo Estrella/AFP via Getty Images

Mexican marijuana ruling. Mexico’s Supreme Court ruled that permits should be allowed for recreational cannabis use. A bill to create a legal market for recreational marijuana is currently stalled in the country’s senate, and though López Obrador said Tuesday he was personally opposed to such legalization, he suggested he might put the matter to a referendum.

Accountability for LGBTQ protections. The Inter-American Court of Human Rights found that Honduras is responsible for the 2009 murder of Vicky Hernández, a transgender woman, in a ruling that could set precedent across the region. Two trans women said a police car approached Hernández prior to her death. The court ruled that Honduras must offer diversity training to security officers and enact other measures to prevent violence against LGBTQ people.

Lights and some action. Buenos Aires’s Teatro Colón, the iconic opera house that mixes Renaissance and Baroque architectural styles, holds its first concert in 15 months today as the city’s Philharmonic Orchestra plays to half capacity. The reopening was originally planned for early April but was delayed due to high levels of coronavirus transmission.

The Copa América soccer tournament is in full swing in Brazil, with at least 17 players and 149 other tournament staffers having tested positive for COVID-19. But the games go on. Of these teams, which did not advance to the quarter-finals? 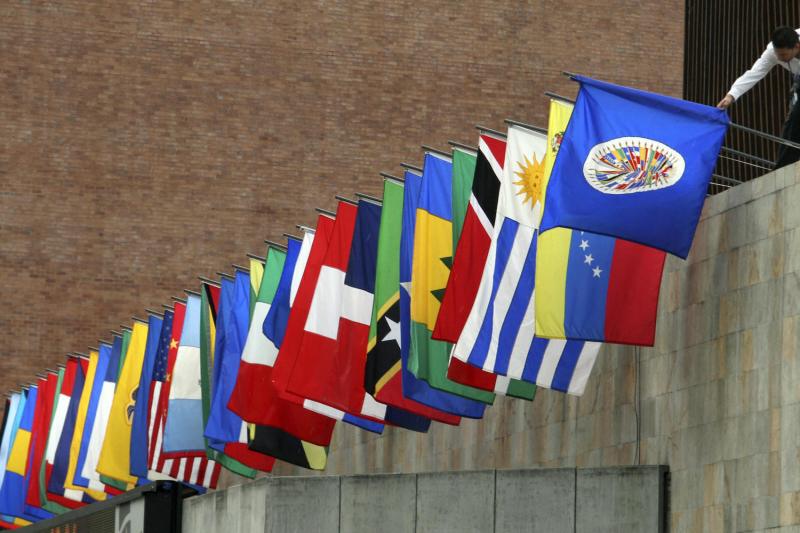 A worker prepares the flags of the Organization of American States (OAS) outside a press conference in Medellin on May 30, 2008.Raul Arboleda/AFP via Getty Images

In a new paper for the Carnegie Endowment for International Peace, scholars Andreas E. Feldmann, Federico Merke, and Oliver Stuenkel lay out steps to rekindle Latin American regional cooperation despite antagonistic presidents and a host of other factors that have led to what is arguably regionalism’s “worst crisis in decades.”

They write that cooperation on the part of subnational governments, technical bodies, and civil society can help the region navigate challenges such as U.S.-Chinese competition, which threatens to sow divisions like technological incompatibility between countries. The pandemic is far from the last stress point that regional fragmentation will make much worse.

Frameworks to salvage. While many countries have recently moved from receptiveness to recrimination toward Venezuelan migrants, at the start of the Venezuelan migrant crisis, frameworks like the Cartagena Declaration on Refugees helped guide Latin American countries’ regularization of Venezuelans, the authors write. And in March 2021, the Development Bank of Latin America greenlit up to $1 billion for health spending in the region. These existing frameworks on topics like migration and health can and should be strengthened even despite obstinance from executive branches, they argue.

How to band together. The authors argue that subnational officials like governors and mayors should work toward boosting regional cooperation. So too should NGOs, academia, and civil society groups that are accessible to up-and-coming policymakers. The paper identifies issues like climate change and overcoming physical and bureaucratic barriers as good candidates for cooperation and encourages minilateral and bilateral initiatives when polarization prevents broader ones.

Bolivia and Venezuela were knocked out of the tournament in group play. So far, Brazil has scored the most goals, with Argentina’s Lionel Messi the highest individual scorer.