Will the End of the U.S. War Create More Afghan Refugees?

With the Taliban insurgency expanding, the U.S. withdrawal could provoke a major humanitarian crisis.

News from Afghanistan is going from bad to worse. As of July 5, the Taliban have taken over 122 districts since May 1, according to analysis by the Foundation for Defense of Democracies, a hawkish think tank that closely tracks the insurgency. Afghan forces are surrendering military outposts, and the Taliban are seizing their weapons.

Meanwhile, with no respite from the violence, Afghans are fleeing. In the north, where the fighting has intensified this week, more than 56,000 people have been displaced in recent days, according to the United Nations. (In 2021, more than 205,000 people have been displaced across the country.) The U.S. troop withdrawal, now around 90 percent complete, is expected to exacerbate the conflict, setting the stage for a major refugee crisis.

After more than 40 years of war, refugee crises are sadly familiar for Afghanistan. There are nearly 3 million registered Afghan refugees worldwide, equivalent to around 1 in 10 of all refugees. But a perfect storm of factors suggests the next crisis could be especially acute: an emboldened and expanding insurgency, terrorist violence, the U.S. withdrawal, a fading peace process, and severe drought conditions to boot.

Those fleeing are likely to seek entry in Pakistan and Iran, already home to several million Afghan refugees each. In recent years, Tehran and, to a lesser extent, Islamabad have both sought to deport people back to Afghanistan due to the perceived economic and security costs of hosting them. The United Nations estimates around 585,000 “undocumented returnees” from Iran and nearly 7,000 returnees from Pakistan reentered Afghanistan this year.

Europe, via the Mediterranean Sea route, has become an increasingly popular destination for Afghan refugees, but European Union states have deported thousands of Afghans too. Increased fighting in northern Afghanistan means Central Asian states will also face influxes of refugees. On Monday, days after the Taliban seized the main border crossing with Tajikistan, more than 1,000 Afghan troops fled there. Civilians likely won’t be far behind.

In the event of a refugee crisis, many countries will face international pressure to accommodate Afghan refugees. But there will also be internal pressures not to admit them. In Pakistan, which is building a fence along its border with Afghanistan, a key suspect in a recent terror attack was revealed to be of Afghan origin this week. “We repeatedly say that Afghan refugees are our brothers and sisters, but the time has come for their dignified return,” Pakistani National Security Advisor Moeed Yusuf said.

The least politically risky option for Afghanistan’s neighbors is to house refugees in facilities just across their borders, hoping the U.N. and aid groups will help finance them. EU states, and especially those that participated in the NATO mission, should also do their part to accommodate Afghan refugees. In recent years, they have deported them using the excuse they are economic migrants rather than war refugees. The country is now embroiled in full-scale civil war.

The looming crisis presents an opportunity for the Biden administration to back up its pledge to help restore U.S. global leadership. The United States should increase funding to the U.N. High Commissioner for Refugees and related institutions to ensure Pakistan, Iran, and Central Asian states have the support they need to help Afghan refugees.

Washington—in concert with Kabul, Afghanistan’s neighbors, NATO countries, and international aid groups—should also push the Taliban to establish safe zones for people displaced inside Afghanistan. The best way to tackle a refugee crisis is to give people fewer incentives to leave. As the fighting mounts, this will admittedly become a hard sell. As Afghans continue to flee violence, they’ll need help—and quickly.

July 12: The Stimson Center hosts an online discussion on the geopolitics of connectivity in South Asia and beyond.

Modi has retained his most high-profile aides: Home Affairs Minister Amit Shah, one of his closest allies; Defense Minister Rajnath Singh; Finance Minister Nirmala Sitharaman; and External Affairs Minister S. Jaishankar, who was traveling to Russia when the reshuffle was announced.

Both global and domestic factors likely drove the reshuffle. Modi’s Bharatiya Janata Party (BJP) lost a key state election in West Bengal in May, and state polls in five other key states are scheduled for February and March 2022. Modi likely intended to bring in new blood to boost the BJP’s electoral prospects, especially amid major pandemic and economic challenges.

Additionally, the reshuffle may be an effort to strengthen India’s global image, which has recently taken hits. Vardhan and Prasad were the public faces of India’s pandemic response and a growing spat with Twitter over internet freedom, respectively—two issues that have provoked negative international media coverage.

Pakistan pins Lahore attack on India. This week, Pakistani officials blamed India for a terror attack in Lahore, Pakistan, last month that killed three people, including a child, and wounded 24 people. Yusuf, Pakistan’s national security advisor, said an Indian national with links to intelligence masterminded the attack. The blast occurred near the home of Hafiz Saeed, head of an India-focused terror group called Lashkar-e-Taiba with close ties to the Pakistani security establishment.

The attack could appear as a shot across the bow to warn Pakistan its assets are not safe. But India has seemingly few incentives to inflame tensions with Pakistan as it focuses on recovering from the coronavirus pandemic and a hot border with China. Its willingness to agree to a border cease-fire with Pakistan earlier this year further suggests it has focused its energy elsewhere.

No end in sight for Bangladesh. The coronavirus surge continues in Bangladesh and, given what transpired in India and Nepal, its path looks painfully familiar. Many areas are short on oxygen, and hospitals are under great strain. Hardest-hit places include Khulna, Bangladesh, the third-largest city, and regions bordering India, where the delta variant was first detected.

Dhaka, the capital, is also reeling. Infection rates there have skyrocketed from 3 to 28 percent over the last month, and authorities worry hospitals will run out of beds in a few weeks if they continue to increase. This week, the government announced an ongoing nationwide lockdown will be extended until July 14. But factories, including those in the garment sector, remain open as long as they follow health protocols. 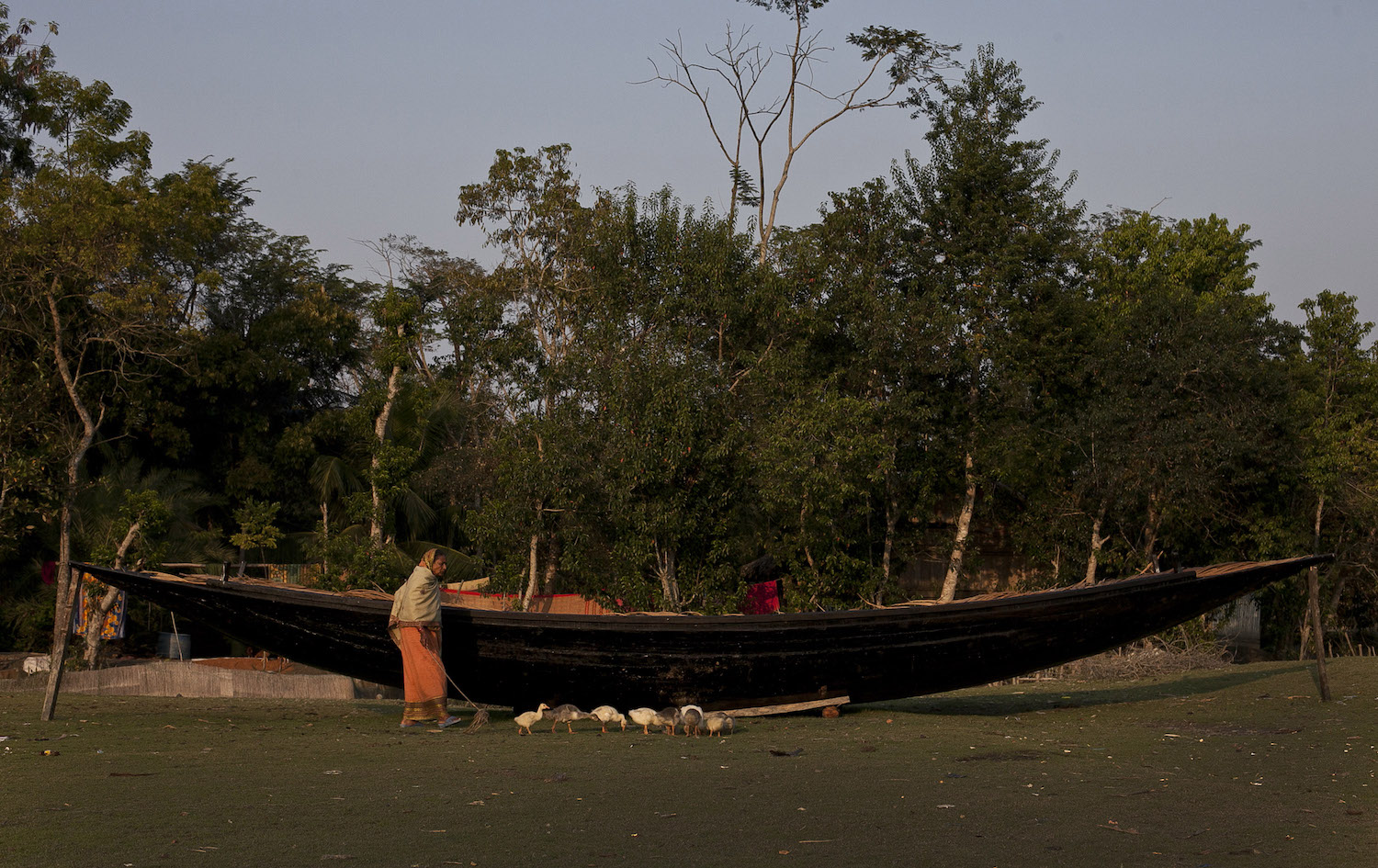 A woman herds ducks on the edge of the Sundarbans in Khulna division, Bangladesh, on Feb. 18, 2014.Getty Images

A controversial new coal power plant in Bangladesh has become a flash point for tensions between the government and environmentalists. The Rampal Power Station, a joint project with India, is expected to start generating electricity in December.

Environmentalists worry about the 3,527 tons of coal imported from India for the plant as well as the location: The site is just nine miles from the Sundarbans, the largest mangrove forest in the world and a UNESCO World Heritage site. The government started constructing the plant without conducting an environmental assessment first, despite a stipulation from the committee overseeing World Heritage sites.

Plant officials insist they are minimizing environmental risks. This week, one official said “high-grade” coal from Indonesia or Australia will be used to generate electricity, and coal from India—known to be especially pollutant—will only be used for construction purposes. Government officials also say the plant will use environmentally friendly technology, although they haven’t given specifics.

“As citizens of this country, we want to know why the government is destroying the Sundarbans, which is known as the lungs of the country.”

—Khushi Kabir, an environmentalist in Bangladesh, decrying the construction of the Rampal Power Station

In a provocative op-ed in Pakistan’s Friday Times, security analyst Ejaz Haider laid out a plan for how Islamabad should address security threats in Afghanistan after the U.S. withdrawal. “Pakistan needs to immediately train for and develop capabilities to pick up early intelligence” on anti-Pakistan terrorists in Afghanistan “and strike at them on Afghanistan’s soil,” he wrote.

Gaurie Dwivedi, a visiting fellow at the United Service Institution of India, wrote for the Times of India about the challenges India faces in pushing back against China’s economic clout. “India promises to be the economic stabiliser against China,” she argued. “But it will remain just a promise if New Delhi does not address some of the fundamental problems plaguing its economy.”

Nepali writer Madhav Shrestha made the case for public diplomacy in the Himalayan Times. “In the case of Nepal, which does not have any hard power worth the name, public diplomacy carries a significant value in promoting its national interest and building up an abiding image of a well-behaving and responsible member in the international community,” he wrote.