Iraq could become a major thorn in Biden’s side.

Welcome back to SitRep! Here’s what’s on tap for the day: Proxy wars heat up between the United States and Iran, the Taliban continue their rapid advance across Afghanistan, and Biden Pentagon nominees face Senate confirmation hearings.

Welcome back to SitRep! Here’s what’s on tap for the day: Proxy wars heat up between the United States and Iran, the Taliban continue their rapid advance across Afghanistan, and Biden Pentagon nominees face Senate confirmation hearings.

President Joe Biden may be nearly done with America’s two-decade military involvement in Afghanistan, but another nearby war zone where U.S. troops have been based for almost as long is threatening to become a major thorn in the White House’s side: Iraq.

The tit for tat between U.S. forces based in the war-torn country and Iran-backed militias first heated up in 2019, when the Trump administration reimposed lapsed sanctions after leaving the Iran nuclear deal. Now, it only seems to be getting worse, even though U.S. military leaders have long insisted that the United States has reestablished deterrence.

Incoming fire. Early Thursday, less than 10 days after Biden OK’d a second round of U.S. strikes on drone-staging areas for militias on the border between Iraq and Syria, the U.S. Embassy in Baghdad came under rocket attack. And just hours earlier, two U.S. service members were injured when Ain al-Asad Air Base, the largest military installation in the country housing U.S. troops, came under attack by more than a dozen rockets.

It appeared more strikes were occurring on Thursday. U.S. troops were left with minor injuries, including concussions. In all, U.S. troops in Iraq and Syria have been targeted with rockets at least four times since Biden’s defensive precision strikes.

Strike hard, strike first. No mercy. Biden administration officials have insisted that the United States will respond hard to Iranian threats. The Washington Post reported last week that the administration would lower the threshold to respond to Iranian rocket attacks, possibly in an effort to—pardon the trope—reestablish deterrence.

“Iran needs to know they can’t hide behind their proxy forces, especially when they injure Americans like they did recently,” said Mick Mulroy, a former deputy assistant secretary of defense for the Middle East and now an ABC News analyst.

War-weary. But it’s not clear how long this back-and-forth can be sustained, even if Americans aren’t getting killed. Experts told Foreign Policy that the United States caught Iran-backed militias off guard with strikes. Yet the Iraqis have long been frustrated by their country turning into a proxy battleground for the shadow war between the United States and Iran.

“It’s already very intense. The strikes aren’t killing people, but they could, easily, if they want them to,” said Michael Knights, a fellow at the Washington Institute for Near East Policy. “The missile defenses are quietly working quite well. But what we haven’t seen is determined efforts to kill Americans.”

Endgame. Some Iran-linked leaders in Iraq have suggested that if the United States stopped returning fire, the tit for tat could end. But the ongoing proxy standoff makes the optics of returning to the Iran nuclear deal, an effort already under bipartisan fire on Capitol Hill, even more difficult.

“They’re probably trying to tempt the Biden administration into taking one on the chin,” Knights said. “They can’t land a decent blow at the moment, and that will probably keep them attacking.”

New kids on the block. The Senate Armed Services Committee will hear from five of Biden’s nominees for top jobs at the Pentagon in a confirmation hearing on Tuesday, headlined by Carlos Del Toro, the commander in chief’s pick to be the Navy’s civilian leader.

Former California Rep. Gil Cisneros, the administration’s choice to be undersecretary for personnel and readiness, will also appear, alongside Deputy Comptroller-designate Kathleen Miller, Army civil works nominee Michael Connor, and Mara Karlin, who would be tasked with spearheading the team that will write the upcoming 2022 National Defense Strategy.

The U.S. ambassador to India during the Trump administration, Kenneth Juster, is joining the Council on Foreign Relations as a distinguished fellow.

U.S. diplomat George Kent (Remember him from the first Trump impeachment trial? He drank a lot of water.) will head to Ukraine to become temporary chargé d’affaires of the U.S. Embassy, the Kyiv Post reports.

Can Europe Make Nice With a Post-Trump America? Join us for an upcoming virtual event! Biden has been getting a warm reception from European leaders since he took office, but with differences emerging between the United States and the European Union on major foreign-policy issues, how long is the honeymoon going to last?

Mark your calendars: Join us for a Zoom event on July 26 at 11 a.m. to give subscribers the inside scoop about the key sticking points dividing the White House and European capitals. And we’ll also have new nuggets and emerging stories to share from our reporter’s notebooks.

What we’re watching this week.

What’s next for the Taliban? Two decades, thousands of lives, and hundreds of billions of U.S. dollars later, the Taliban have all the momentum in Afghanistan. How far can they advance into Afghanistan? Who are the major players to take the Taliban into this new era? Will they abandon some of their extremist views as they try to polish their international image?

We delved deep into those questions in a story this week, exploring how the group remains united for now in the face of victory, but that might not last as tensions simmer between various Taliban factions. (And shout-out to SitRep reader Ann, who sparked our interest in pursuing this story after asking about it at our last SitRep live event.)

JEDI cloud tricks. What’s a multibillion-dollar defense contract without a little drama? The Pentagon announced this week that it was abandoning a massive $10 billion cloud-computing contract for the Joint Enterprise Defense Infrastructure (JEDI) after its decision to grant Microsoft the contract ground down into legal battles with Amazon Web Services, which alleged that Trump interfered with the award process.

Fret not, oh poor marginalized defense contractors: The Pentagon said it would consider both Amazon and Microsoft for future contracts.

Unholy quagmire. After seven years of civil war that fomented the world’s worst humanitarian crisis, Yemen’s conflict shows no signs of abating, despite repeated pronouncements from U.N. negotiators that the warring parties are ready to talk. Read this dispatch from Samy Magdy of The Associated Press in Marib City, an epicenter in the stalemated slog between Iran-backed Houthi rebels and Saudi-backed Yemeni forces. 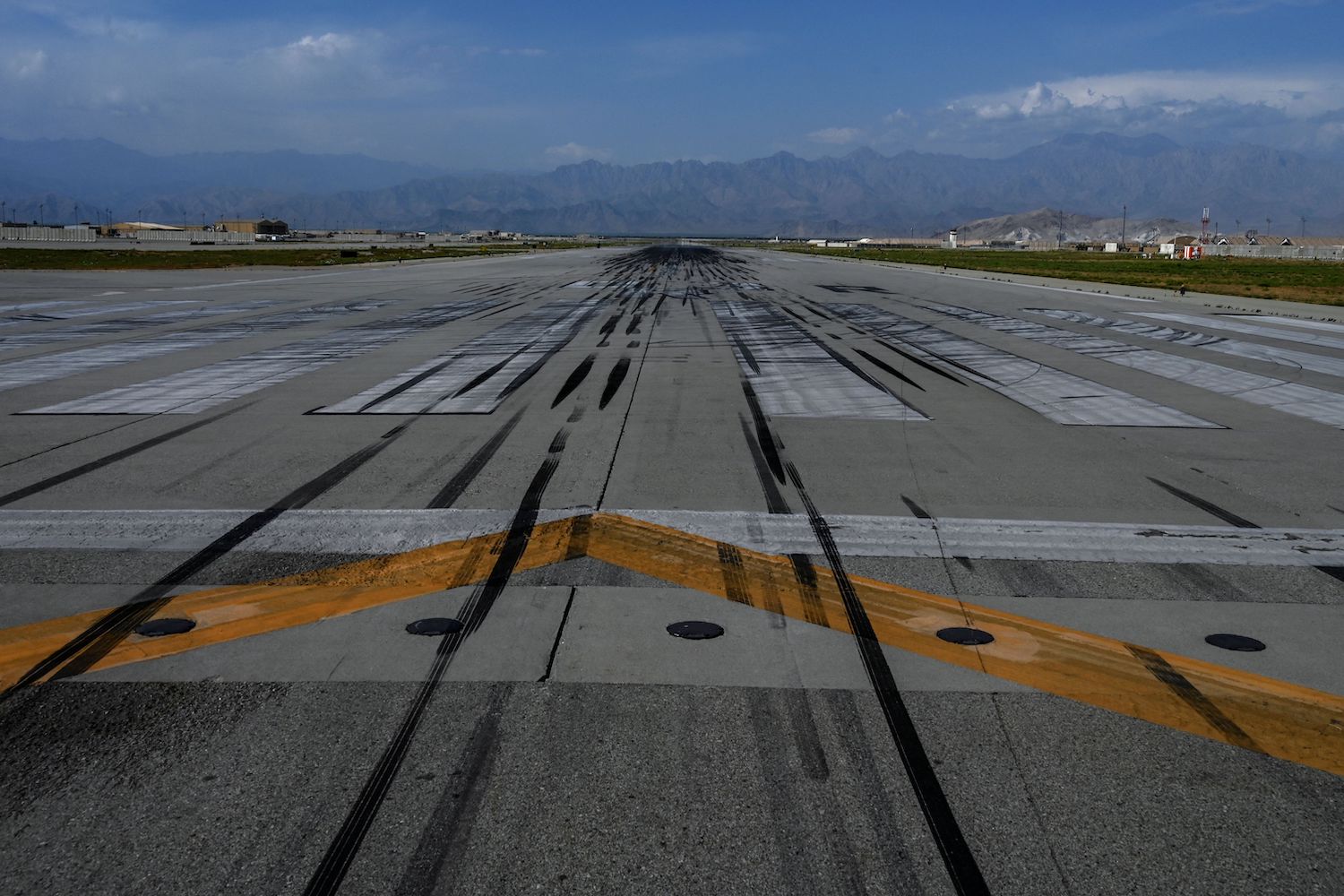 A view of the completely empty runway tarmac inside the Bagram Air Base.

A view of the completely empty runway tarmac inside the Bagram Air Base, once the epicenter of U.S. operations in Afghanistan, after U.S. and NATO troops left this week on July 5.Wakil Kohsar/AFP via Getty Images

July 11: G-20 officials meet in Venice for a conference on climate change.

July 14: Former Vice President Mike Pence gives an address on U.S. policy in the Indo-Pacific at the Heritage Foundation.

Tuckered out. Fox News commentator Tucker Carlson was trying to set up an interview with Russian President Vladimir Putin shortly before he accused the U.S. National Security Agency (NSA) of spying on him in an effort to take him off the air, Axios reports. Carlson’s allegations against the NSA—which remain unfounded—were refuted by the intelligence agency last month in a rare statement.

NEW FOR SUBSCRIBERS: Want to read more on this topic or region? Click + to receive email alerts when new stories are published on Security, United States, Iran