The Hit on Haiti’s President

International observers have stood by as Haiti’s political crisis escalated.

The highlights this week: Why a new position from the international community could be decisive in Haiti after the assassination of its president, Colombia’s transitional justice court spotlights abuses by security forces, and Mexico’s contentious announcement about a major oil field.

The highlights this week: Why a new position from the international community could be decisive in Haiti after the assassination of its president, Colombia’s transitional justice court spotlights abuses by security forces, and Mexico’s contentious announcement about a major oil field.

Helping Haiti Back From the Abyss

The steady, corroding blaze of Haiti’s political crisis reached such heights in recent weeks—with more than 13,000 people fleeing gang violence since June 1, according to the United Nations—that more than one close observer of the country’s politics described Wednesday morning’s assassination of President Jovenel Moïse by a hit squad as shocking but not surprising.

Moïse had been ruling by decree since January 2020. He had faced on-and-off anti-government protests since 2018 and was preparing to oversee highly controversial general elections and a constitutional referendum. He had reduced trips outside his house in recent months, having told El País in February that economically powerful families threatened to kill him. Meanwhile, gangs including current and former police officers have grown increasingly powerful and received support from government officials in their targeting of opposition neighborhoods, according to watchdogs.

At the time of writing on Thursday afternoon, Haitian authorities said police had killed four people suspected in Moïse’s assassination and arrested six. But even if the perpetrators were correctly identified, Haiti’s turmoil is deeper than ever. While interim Prime Minister Claude Joseph declared a 15-day state of siege Wednesday, Ariel Henry, whom Moïse had selected to replace Joseph on Monday but was never sworn in, told Haitian newspaper Le Nouvelliste that he is the rightful prime minister and disagrees with the siege declaration.

International actors adrift. Until now, international actors such as the United States, United Nations, and Organization of American States (OAS) have mostly failed to pour water on Haiti’s political crisis even despite their immense influence in the country, long history of intervention, and clear junctures where stronger mediation could have been appropriate. Washington, for example, supported Moïse’s plan for September general elections at least until his death, despite the fact that, in the words of Haitian journalist and former U.N. official Monique Clesca, “There is no credible voter registration process, there is no security from violence, there is no independent electoral machine to guarantee fair and honest results.”

As recently as late last month, the OAS issued what the Nation’s Amy Wilentz called a “blithely optimistic report” on the situation in Haiti, recommending that elections proceed. Wednesday’s assassination prompted increased calls for international actors to get off the sidelines.

An alternative path. Instead of rushing into a vote that could inspire widespread mistrust, the international community should push for the necessary conditions for credible elections, the Center for Strategic and International Studies’ Georges Fauriol wrote for Global Americans last week. As far as an eventual constitutional referendum, “it can only be achieved by a government whose mandate is not being questioned,” he wrote.

Clesca, for her part, called for international backers to look to Haitian civil society groups such as a four-month-old commission that has held dialogues with political parties, the private sector, grassroots groups, and others on an agenda to exit the crisis. Until now, “our voices were not heard,” she told Americas Quarterly. “The international community instead chose to side with an autocrat. They accompanied this man, so they bear a responsibility in what is going on now.”

The specter of intervention. In response to insecurity in Haiti and the ease with which an apparent mercenary group killed the country’s president, the Washington Post’s editorial board called for “swift and muscular international intervention.” This alarmed many Haitians; as the Post itself noted, a U.N. stabilization mission between 2004 and 2017 introduced a severe cholera epidemic in the country, and its troops faced credible allegations of rape and sexual abuse. They reportedly fathered hundreds of children with poor women and girls.

“We need the international community to stop imposing what they think is correct and instead think about the long term and stability,” Haitian policy expert Emmanuela Douyon told the New York Times.

In the short term, beyond the need for political support, Haiti faces a dire humanitarian situation. Over 40 percent of the country was experiencing food insecurity in February, up 80 percent from a year earlier. And the country has yet to begin its COVID-19 vaccination campaign.

Tuesday, July 13: Colombia due to be discussed at the U.N. Security Council.

An oil field for Pemex. Mexican authorities named state oil company Petróleos Mexicanos the operator of the massive Zama oil field, which was discovered in 2017 by a private consortium led by Talos Energy. Talos said it would explore legal options surrounding the decision, suggesting the yearslong dispute over the field’s management is not over. 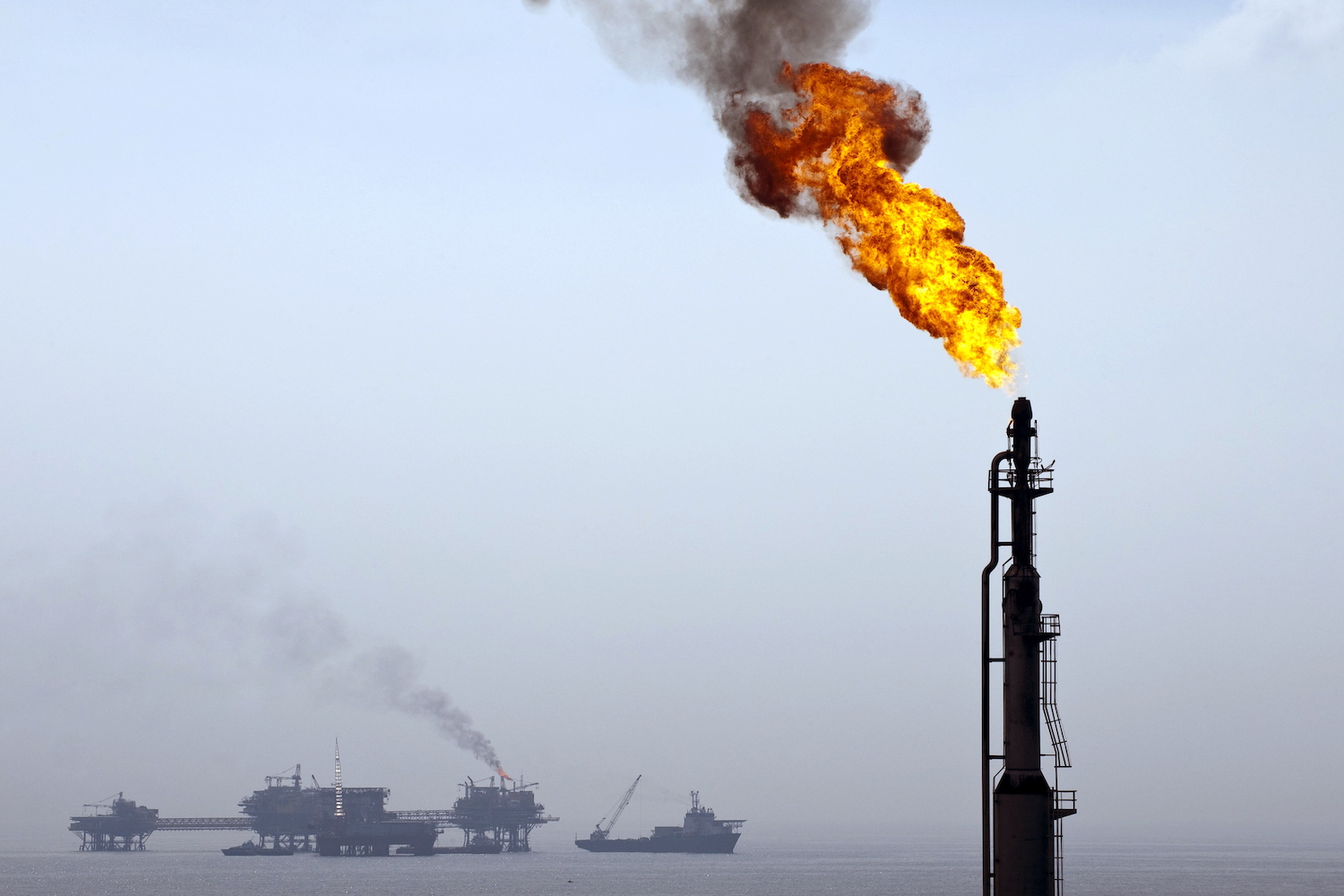 Oil rigs from the Pemex Ku-S oil processing center, part of the Ku-Maloob-Zaap complex, are seen in the Gulf of Mexico on Aug. 5, 2010. Alfredo Estrella/AFP/Getty Images

A Colombian-Argentine deal at CAF. Colombia’s Sergio Díaz-Granados won a selection process to head the CAF Development Bank of Latin America for a five-year term. El País reported that because the leadership choice is made by consensus, the bank handled fierce opposition to Díaz-Granados from Argentina and Mexico by naming Argentina’s candidate, Christian Asinelli, a CAF vice president whose recommendations Díaz-Granados pledged to consult.

Uruguay’s trade flirtations. Uruguay told fellow members of the Mercosur trade bloc Argentina, Brazil, and Paraguay that it will pursue bilateral trade agreements with countries outside the bloc. Uruguay and Brazil have called unsuccessfully for a reduction in Mercosur’s common external tariff.

Chile’s head constitutional assemblywoman. The Indigenous Mapuche linguist Elisa Loncón won an election for president of Chile’s constituent assembly with 96 of the body’s 155 votes, pledging that the new constitution would make Chile “plurinational and multicultural.” 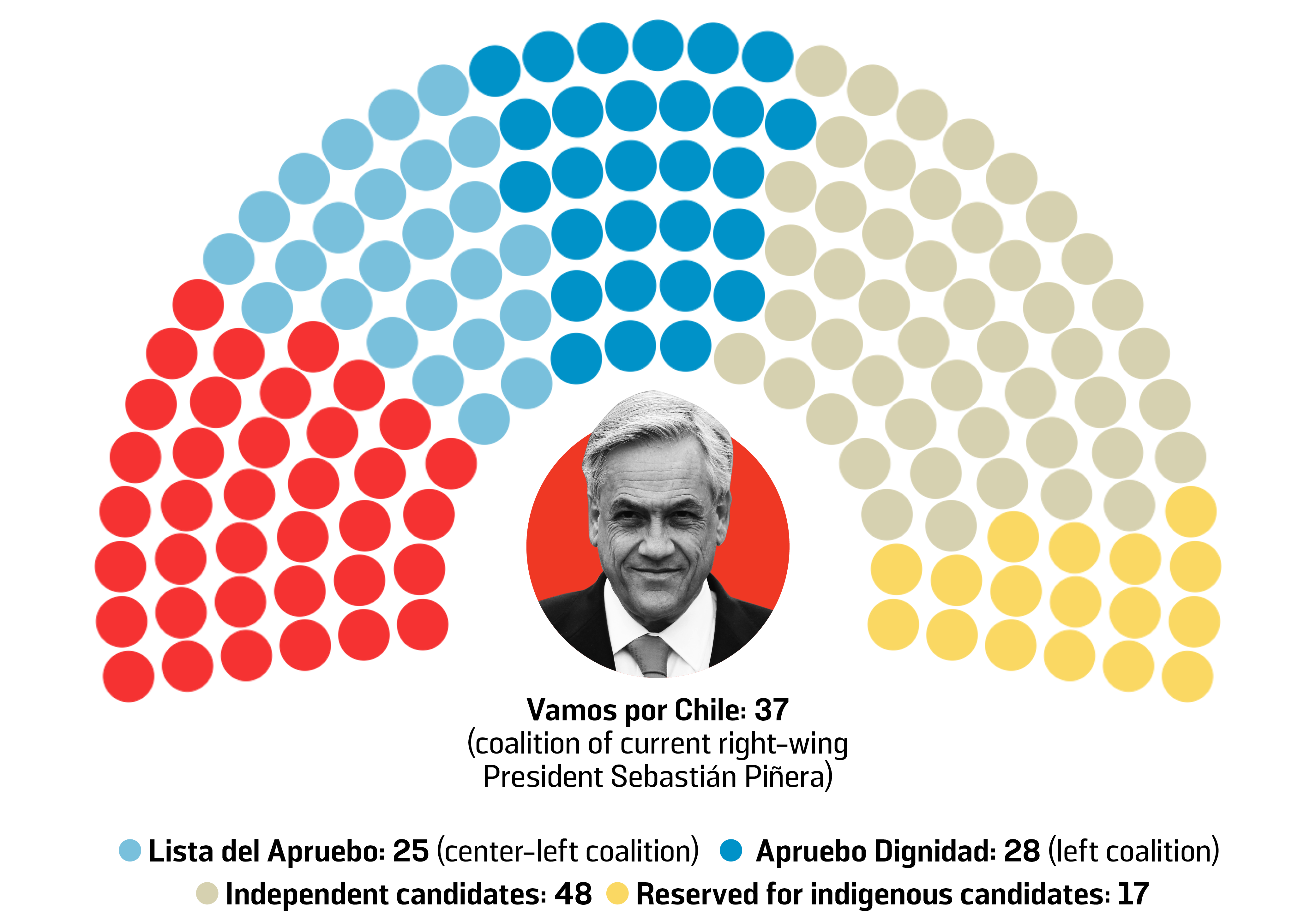 As if the CAF and Mercosur tensions were not enough, Argentina will play Brazil in Saturday’s Copa América final in a match that some commentators predict will be technically superior to the final between Italy and England at the UEFA European Championship on Sunday. The two national teams are among the world’s best, their top players are among the world’s best, and their rivalry is bigger, according to the Brazilian sports journalist Mauro Cezar Pereira. While Brazil is the home team, Argentina is coming off a year marked by the death of its spiritual icon, Diego Maradona.

In what year was the assassination of a Haitian president followed by a U.S. military invasion that went on to become a near two-decade occupation? 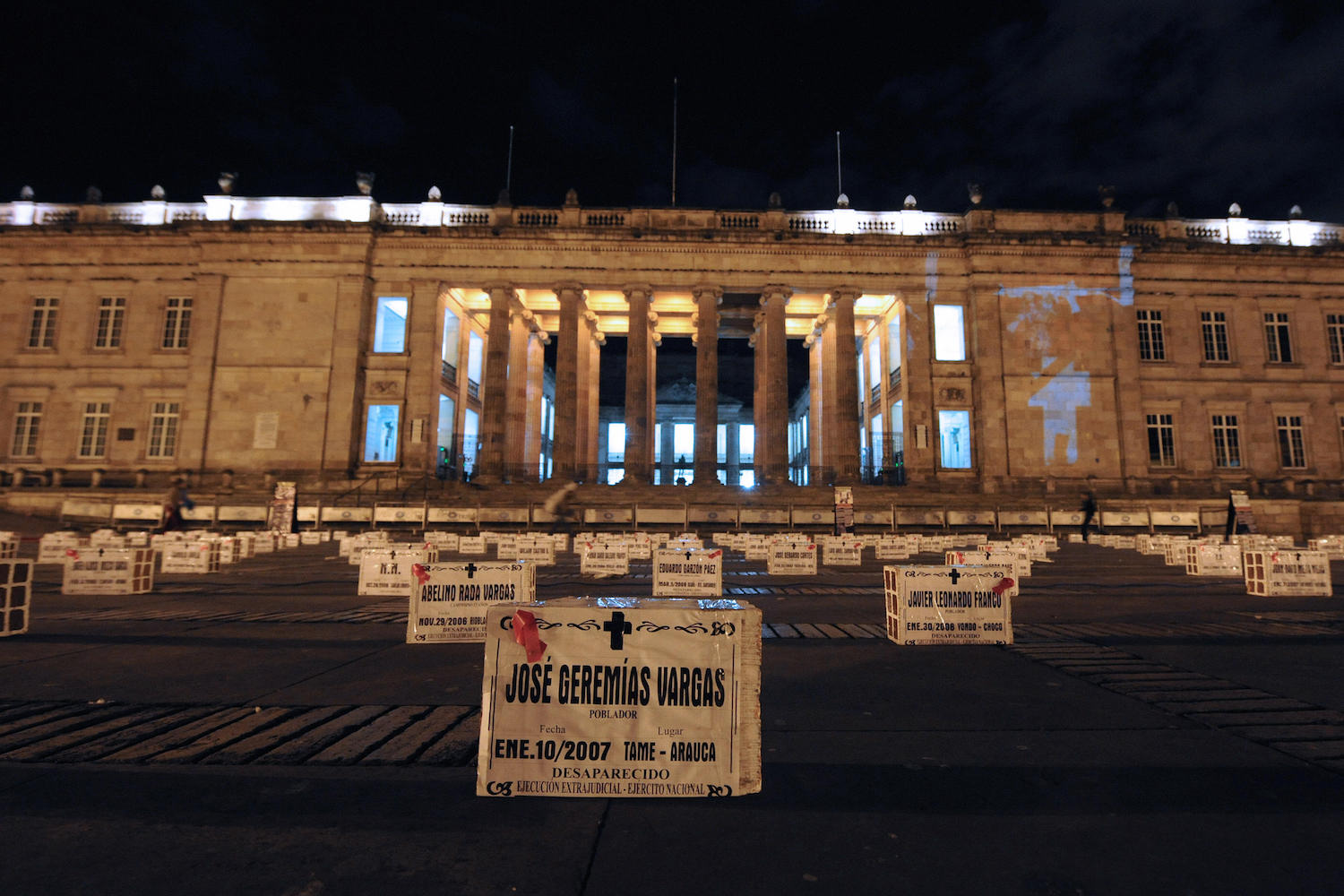 A picture of fake tombs placed in front of the Congress building during a protest against the false positives, massacres, and forced disappearances by Colombian authorities in Bogotá on March 6, 2009. Mauricio Duenas/AFP/Getty Images

On Tuesday, Colombia’s transitional justice court issued its first sentence for people—in this case, 10 army officers and one civilian—who killed or forcibly disappeared civilians during the country’s internal conflict, incorrectly labeling victims as guerrillas to boost the appearance of battlefield victories for the Colombian army.

The court estimates that, between 2002 and 2008, more than 6,400 Colombians fell victim to such crimes, which became known as “false positives.” Tuesday’s ruling found that the killings constituted crimes against humanity and stemmed from both institutional pressure to raise kill counts and widespread stigma against Colombian civilians, Judge Catalina Díaz said.

The JEP proves its mettle. Even after the false positives had been tried in Colombia’s normal justice system, Tuesday’s ruling was the first time that an officer who held the rank of general at the time of the crimes was indicted, underscoring the power of the transitional justice court—known by its Spanish acronym, JEP—to bring new levels of accountability.

The court expects to issue at least five more indictments for similar killings. Among its seven different lines of investigation about the conflict, those regarding false positives and crimes committed by guerrilla leaders have been the first to lead to charges. In late April, a group of former guerrilla leaders officially accepted responsibility for crimes the JEP ruled they committed.

Sentencing versus reform. While families of the false positive victims welcomed this week’s indictments, the past few months in Colombia have shown that abuse of authority is still far too common among the country’s security officials. Police killings of anti-government protesters have prompted widespread calls for police reform, and even U.S. President Joe Biden discussed the need for accountability for law enforcement on his first-ever call with Colombian President Iván Duque last week.

In early June, Duque issued a proposal for police reform that did not include a key civil society demand of shifting police from defense ministry to interior ministry supervision. Nor was Colombian society broadly consulted on the plan’s design. Police reform appears poised to remain a prominent issue in the country’s presidential election next year.

Haitian President Vilbrun Guillaume Sam was assassinated in July 1915. Soon after, U.S. troops began a nearly 20-year occupation of the country, during which the United States took control of Haiti’s banks, forced it to rewrite its constitution so it would be friendlier to foreign property owners, and fought off several insurgencies. The U.S. governance template outlived the occupation: After the U.S. departure in 1934, Haiti’s central government continued to control rural politics and quash dissent with an army the United States helped create, the journalist Jonathan Katz has written.