The highlights this week: The tragedy of South Sudan’s independence, rioting and looting following Jacob Zuma’s arrest in South Africa, and how a secretive social media platform is freeing Nigeria’s LGBTQ community.

If you would like to receive Africa Brief in your inbox every Tuesday, please sign up here.

The highlights this week: The tragedy of South Sudan’s independence, rioting and looting following Jacob Zuma’s arrest in South Africa, and how a secretive social media platform is freeing Nigeria’s LGBTQ community.

If you would like to receive Africa Brief in your inbox every Tuesday, please sign up here.

There was little to celebrate as South Sudan marked a decade of independence on July 9. Africa’s youngest sovereign nation has been the site of a near-constant conflict that has killed almost 400,000 people and dimmed many of the hopes that accompanied independence.

Emerging from war. The creation of South Sudan came after a complex deal that was meant to end decades of conflict between the north and south of Sudan.

The conflict began even before Sudan formally gained independence from Britain in 1956, sparked by a mutiny in the south that was brutally put down by the north. It would set off a troubled relationship that led to the deaths of 1.5 million people, displaced multiple generations, and halted development in the south as Khartoum and other northern cities grew.

North-south violence continued until the 2005 Comprehensive Peace Agreement that paved the way for secession. In a 2011 referendum, 99 percent of voters chose to secede, and South Sudan became an independent nation. No sooner had the country become independent than it faced its first major security conflict—a dispute with Sudan over oil experts that led to the Heglig crisis.

Internal strife. South Sudan’s greatest challenges, though, would come from within. A power struggle between President Salva Kiir and his deputy Riek Machar plunged the country into a civil war in 2013 that it has been unable to end. The conflict had ethnic characteristics, pitting Kiir (a member of the Dinka ethnic group) against Machar (who is Nuer), but it is fundamentally a fight over resources in a country that has never had the institutions of good governance.

This conflict has trickled down to the grassroots level, with tribes competing over scarce resources, as battles over grazing land and cattle raiding turn into deadly clashes leaving dozens of people dead. Despite holding office, Kiir and Machar have time and again returned to their former roles as warlords, with rebel groups vying for control at the expense of civilians.

Machar, who holds a Ph.D. from the University of Bradford, has consistently demanded that the uncredentialed Kiir step down. Kiir, who took over the SPLM after the death of its founder John Garang, has tried to sack Machar more than once, accusing him of plotting a coup. Both have been accused of using brutal tactics.

The rivalry in Juba has distracted the government from building any real institutions—not even the postal service—and left swaths of the country insecure and vulnerable to warring groups and militias fighting over land, water, and other basic resources. A unity government and agreements brokered by the international community, the most recent in October 2020, have failed to bring any real stability despite the promise of a 2022 election.

International disappointment. “Together, we can ensure that today marks another step forward in Africa’s long journey toward opportunity, democracy and justice,” then-U.S. President Barack Obama declared as the White House formally recognized South Sudan in 2011.

Today, as Colum Lynch writes in Foreign Policy, South Sudan has “become a symbol of American hubris and overreach” that can be attributed not only to the Obama administration but policies driven by Christian evangelicals during George W. Bush’s presidency.

Kiir, in particular, has become a source of disappointment for those in the international community who once supported his presidency.

“He has devolved into a very troubling, brutal dictator. He’s torturing people, he’s executing people. People are disappearing. Some of them are friends of mine, and I am very troubled by it,” Andrew Natsios, a former U.S. diplomat who was in the country when it gained independence, told Foreign Policy. Frustrated with Kiir’s cronyism, Britain has cut bilateral aid and withdrawn troops from the peacekeeping mission.

Unending humanitarian crisis. South Sudan remains an internationalized conflict. The country’s most basic functions, including health care and education, are outsourced to nongovernmental organizations. The United Nations Mission to South Sudan is not only tasked with trying to build a constitution, but it provides day-to-day resources like building bus stop shelters on top of its peacekeeping responsibilities.

In the meantime, two-thirds of the population is in dire need of humanitarian assistance, stalked by cholera, famine, and now COVID-19. Their lives are not so different from when they were under Sudanese rule. It is these citizens who are most disappointed with South Sudan’s tragic first decade of independence. 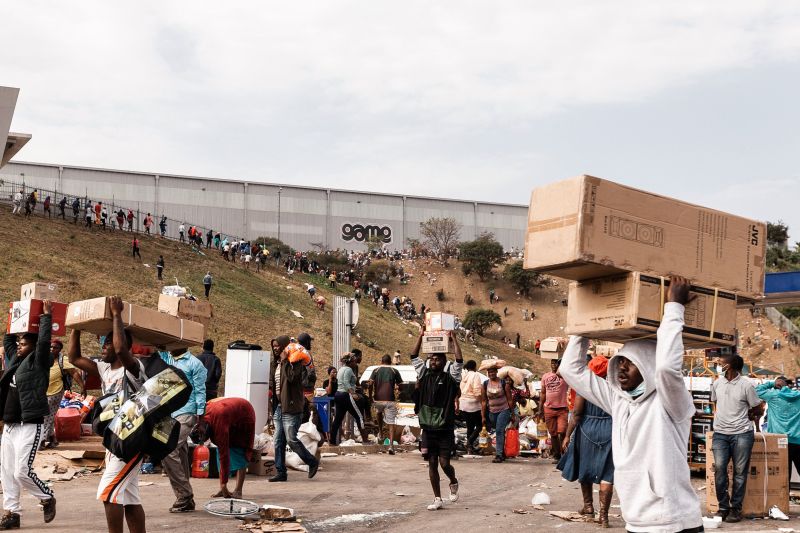 Looting in South Africa. The imprisonment of Jacob Zuma on July 7 sparked a wave of protests in South Africa that has morphed into a much larger looting spree. Protesters began by blocking roads and burning trucks in Zuma’s stronghold, the predominantly Zulu KwaZulu-Natal province. While announcing an extension of the COVID-19 lockdown, President Cyril Ramaphosa denounced the “ethnic mobilization,” alluding to allegations that the demonstrations were rooted in Zulu nationalism.

Ramaphosa’s statement did nothing to quell the violence, and the protests spread this week to Johannesburg, where looters targeted shopping malls, an indication that motivations have evolved from the political to the economic. Many of the looters were young Black South Africans, the demographic facing the highest rate of unemployment. Ramaphosa gave another national address on Monday and this time deployed the military—but the looting has continued. Over 70 people have been killed and hundreds arrested as of Tuesday evening.

Dispute on the Nile. As Ethiopia resumes filling the Grand Ethiopian Renaissance Dam, its dispute with Egypt and Sudan was taken up by the U.N. Security Council. The July 8 meeting was the second time the Security Council discussed the issue, pointing to the growing urgency of the water dispute. While Ethiopia continues to argue that the dam’s electricity generation will benefit the region, Sudan and Egypt see it as an existential threat.

“It has cast a long and dark shadow on the future and fate of the people of Egypt,” Egyptian Foreign Minister Sameh Hassan Shokry Selim told the Security Council. The U.N. meeting ultimately reverted to the African Union, which has tried to broker an agreement over the last year.

Rwandan troops in Mozambique. Rwanda deployed 1,000 troops to Mozambique’s troubled north, Kigali announced on July 9. The force, consisting of members of the Rwanda Defence Force and Rwanda National Police, was sent at the request of the Mozambican government. The move preempts a deployment by the Southern African Development Community’s standby force, which was approved last month.

The Rwanda deployment comes after talks between Presidents Paul Kagame and Filipe Nyusi, which were seen as undermining the southern African bloc. With Kagame’s assistance, Nyusi can maintain control over the Cabo Delgado conflict, including the public narrative—asserting Mozambique’s sovereignty and defending the Frelimo government’s reputation as a liberation force.

The move in turn helps Kagame broaden his security role on the continent, following a similar Rwandan deployment to the Central African Republic. Southern African forces were meant to deploy on July 15 but by July 13 were waiting on Mozambican approval, South Africa’s defense minister said.

Rights groups say the charges were meant to whip up populist fervor in the conservative country, with the government accusing the two of exploiting their millions of female followers, exposing them to apps that could encourage pornography. Instead, activists say, Hossam and Adham’s arrests are part of a growing crackdown on social media to deter young Egyptians from using the platforms.

Surge in COVID-19 infections. Africa has experienced what the World Health Organization described as “its worst pandemic week ever.” The continent recorded more than 251,000 new COVID-19 infections in the week ending July 4. It was a 20 percent increase from the previous week and 12 percent higher than the January peak. Sixteen countries are in the grip of a resurgence, with the delta variant driving infections in 10 countries.

Nigeria’s subversive OnlyFans star. The Nigerian fitness model Bolu Okupe has made political waves and drawn the ire of his father, the conservative Nigerian politician Doyin Okupe, by becoming a gay icon on the social media app OnlyFans.

Okupe came out on Instagram in January and has used OnlyFans to share what it means to be a gay Nigerian man, highlighting the importance of positive representation of the country’s marginalized LGBTQ community while also selling merchandise. It flies in the face of everything his father stands for. The elder Okupe helped draft a 2014 law criminalizing same-sex relationships. Posting from Paris, Okupe will not travel to Nigeria without bodyguards, he told Rest of World.

OnlyFans was founded by the British entrepreneur Tim Stokely as a platform that would connect influencers directly to their fans. Initially attracting musicians and YouTubers offering exclusive content to paying subscribers, the platform soon attracted large numbers of adult entertainers along with amateur performers trying to make extra income behind the site’s subscriber-only walls.

For Nigerian users, the site’s reputation risks the stigma of being labeled sex workers in an already conservative country. For some, though, the freedom of OnlyFans has not only brought liberation; it has ironically brought a large following from Nigeria, pointing to the growing disconnect between Nigeria’s purported values and the lives of its young people.

Cultural preservation in a diaspora. Living in the United Kingdom, the writer Ayis Stephen-Diver finds herself constantly introducing people to the Ijaw, the fourth-largest ethnic group in Nigeria. In the diaspora, the Igbo and Yoruba dominate understanding of Nigerian culture, but this erases the experiences of a group fighting for equality in the Niger Delta, Stephen-Diver argues in Al Jazeera.

Malawi corrals refugees. Malawi was once a haven for refugees in the region, allowing them to settle and integrate with the local community. Yet, as Golden Matonga writes in the Continent, the government has issued an ultimatum demanding refugees return to the country’s sole refugee camp, citing security concerns and the insurgency in Mozambique—but activists are unconvinced.