Alright, here’s what’s on tap for the day: China vies for Pacific supremacy with aircraft carrier buildup, Biden catches up on NatSec staffing, and the White House gets ready to evacuate Afghan translators.

Alright, here’s what’s on tap for the day: China vies for Pacific supremacy with aircraft carrier buildup, Biden catches up on NatSec staffing, and the White House gets ready to evacuate Afghan translators.

At the Jiangyan shipyard near Shanghai, the Chinese navy is busy building up its next crown jewel. The Type 003 Carrier—boring name aside—showcases China’s growing naval ambitions and poses one of the greatest new challenges to U.S. naval supremacy in the Asia-Pacific.

China isn’t saying much about its new carrier, but satellite imagery analyzed by experts at the Center for Strategic and International Studies this week shows it is making “considerable progress” on the carrier, with its flight deck, superstructure, and sponsons “nearly complete.”

The carrier, about 318 meters in length, will be the Chinese People’s Liberation Army Navy’s (PLAN) most technologically advanced and largest yet—and the largest non-U.S. carrier to be constructed in decades. U.S. Indo-Pacific Command estimates China could have four carriers by 2025, with potentially one more to come by 2030. It’s a sign China, already the world’s largest shipbuilder, wants to use that industrial might to supercharge its massive navy.

What the new carrier means. “The trend is that China is attempting to build a blue water navy, and that’s what this third carrier and plan beyond that represents,” said Eric Sayers, an expert with the American Enterprise Institute and former advisor to the commander of U.S. Pacific Command. “That’s not for its near seas. … That’s more for projecting power into the Indo-Pacific and beyond.”

China’s carrier upgrades and other investments in its navy have some experts worried Beijing could be getting more capable of showdowns with U.S. carrier strike groups in the region or launching a military assault on Taiwan, which top military officials have predicted could come within the next six years.

PLAN of attack. “I think they’re going to become more confrontational,” said Jerry Hendrix, a retired Navy captain and former U.S. Defense Department official. “With their carriers, they may think that they’re going to be able to establish sea control for long enough that they can pull off an amphibious assault.”

Tensions between Washington and Beijing have ratcheted up as China bristles at the U.S. Navy’s freedom of navigation operations (FONOPS) near disputed island chains in the South China Sea. In the latest round of the two superpowers’ naval chest-thumping, China claimed it “drove away” a U.S. destroyer sailing near the disputed Paracel Islands—claims the Pentagon has dismissed as “false.”

Sayers said China is, in effect, building up two navies simultaneously: one for its “near seas” and, increasingly, a blue water navy capable of operating in open oceans. “What the carriers represent is a growing confidence that they have the industrial capacity and the capability to deter the U.S. Navy in the near seas, or at least match them to some degree, but they can also invest in direct resources toward far seas power projection capability,” he said.

Catching up. The United States is already falling behind in the quantitative race with China—although naval experts caution the number alone doesn’t tell the whole story. China is estimated to have had 360 battleforce ships by the end of 2020, compared to the U.S. Navy’s 297 ships. Some of U.S. President Joe Biden’s picks for top Pentagon posts have voiced support for getting the United States to a 355-ship Navy, but Biden’s budget doesn’t seem to match those plans.

Then there’s the matter of what’s on the carrier itself. U.S. carriers have had catapult launch capabilities on board for decades, giving its Navy the ability to generate massive “sorties” (Pentagon speak for bombing runs).

But for China, it’s a big deal. Developing carriers with larger flight decks and catapult and resting gear platforms like the Type 003, which should be ready to go by 2022, gives Beijing the ability to throw more heavily armed fighter jets into combat at flight speed—a sign Beijing could challenge the dominance of U.S. flattops in the region.

Keeping U.S. naval planners up at night. The carriers’ significance is not lost on experts in Washington. “They’re moving beyond having aircraft carriers as just prestige platforms, and they’re moving to something much more complex,” Hendrix said. “They’re moving to a power projection platform that can throw ordinance a longer distance.”

Give Us Your Best Summer Reading Recs

Your favorite nonfiction, fiction, graphic novels, spy thrillers, 900-page academic tomes on international relations theory—if you loved reading it and think other SitRep readers would too, send it our way.

We’ll curate the suggestions as best we can and report back in the next few weeks for our inaugural SitRep summer reading list!

Okay, now back to our regularly scheduled programming.

The revolving door in Washington is whirring a lot faster this week. Here’s a look at what’s going on:

Michael Brown, Biden’s pick to become the Pentagon’s acquisition chief, took himself out of the running on Wednesday, Inside Defense first reported. Brown faced an inspector general probe that said he used federal hiring tools to hire friends at the Defense Innovation Unit when he led it.

Biden announced Jeff Flake, a former Arizona Republican senator, as his nominee to be the next U.S. ambassador to Turkey.

Among other nominees the White House announced this week: Gabe Camarillo to be undersecretary of the Army, Alan Estevez to be undersecretary for industry and security at the Commerce Department, Kent Logsdon to be the ambassador to Moldova, and Atul Gawande to be assistant administrator of the Bureau for Global Health at the U.S. Agency for International Development.

Biden’s team has withdrawn their expected pick for the Treasury Department’s top international posting, Heidi Crebo-Rediker, according to Bloomberg.

Min Mitchell has been named the new executive editor at Radio Free Asia.

The Pentagon’s former top policy official under Trump, John Rood, is heading to Momentus Space, a Silicon Valley space exploration company, to be its chief executive officer, Reuters reported. The move comes one day after the U.S. Securities and Exchange Commission filed federal charges against the firm for making misleading statements about its technology ahead of a planned merger.

Jack reported in May that the Biden administration was concerned the Russian-founded company could make off with U.S. space secrets.

SitRep Live: Can Europe Make Nice With a Post-Trump America?: Join us on July 26 at 11 a.m. EST for a live event with our executive editor, Amelia Lester.

We’ll talk shop about the state of transatlantic relations (is the post-Trump honeymoon phase over?) and give subscribers the inside scoop about key sticking points between the White House and European capitals. And, as always, field smart questions from our SitRep readers.

What stories should be at the top of the NatSec news cycle.

Promises made; promises kept? The Biden administration announced this week it would evacuate thousands of interpreters and other Afghans who assisted U.S. troops in third world countries—or even at military bases in the United States—as they await U.S. visas. It comes as the Taliban continue their offensives to gain control of the country amid the U.S. withdrawal.

War on war powers. A bipartisan campaign in Congress to claw back the president’s war power authorities is gaining steam, Robbie reported.

All about AI. This week, U.S. Defense Secretary Lloyd Austin previewed a plan for the Pentagon to pour $1.5 billion into its artificial intelligence hub—the Joint Artificial Intelligence Center—in the next five years. 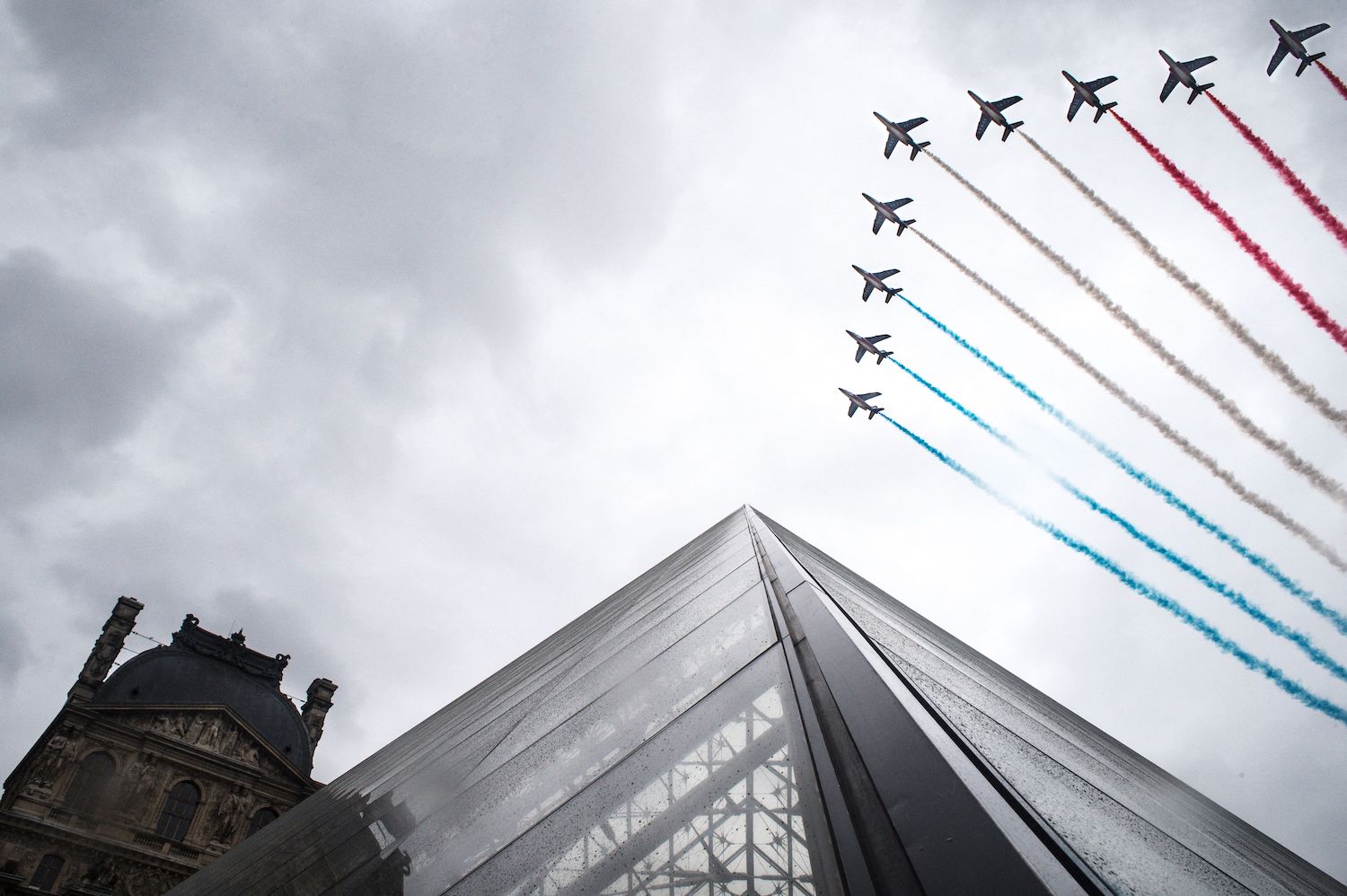 French jets fly over the Louvre Pyramid during the annual Bastille Day military parade on the Champs-Élysées avenue in Paris on July 14. Lucas Barioulet/AFP via Getty Images

July 16: U.S. Sen. Jeanne Shaheen speaks at a Center for Strategic and International Studies event on securing U.S. visas for Afghans who supported the U.S. war effort in Afghanistan.

In case you didn’t know, the Association of the U.S. Army publishes graphic novels detailing the exploits of Medal of Honor recipients that are well worth the read. The latest issue is on Mitchell Red Cloud Jr., a U.S. Army infantryman during the Korean War who held off a Chinese attack to prevent his company from being overrun. Thanks to Haley Britzky for the story, who first brought this to our attention.

—Gen. Mark Milley, chairperson of the Joint Chiefs of Staff, voicing fears to colleagues and deputies that Trump would attempt a coup after his election loss, according to a new book on Trump’s final year in office. (Milley and his office have not publicly addressed the claims made in this book.)

Side hustle. Lebanon’s army is so cash-strapped it is selling rides on its military helicopters to help bankroll their maintenance, Reuters reported.

Quite a racquet. An oldie but goodie that resurfaced on Twitter this week: a (fake) viral video of tennis champion Novak Djokovic playing a round against an Abrams tank.