How COVID-19 Has Shaped South Asia

The region has become a pandemic hot spot.

The highlights this week: What COVID-19 has meant for South Asia, Taliban offensives continue in Afghanistan, and Nepal’s Supreme Court removes an embattled prime minister.

The highlights this week: What COVID-19 has meant for South Asia, Taliban offensives continue in Afghanistan, and Nepal’s Supreme Court removes an embattled prime minister.

On Monday, Bangladesh tallied nearly 14,000 new COVID-19 cases, which set a new daily record and brought the country’s total number of cases to more than a million. A seven-day lockdown imposed on July 1 was extended into this week, but authorities have announced it will be relaxed for the Eid al-Adha holiday next week—even though health experts advising the government have warned that crowded celebrations could become superspreader events.

Bangladesh is just the latest South Asian country to experience a serious pandemic surge. Nepal, Afghanistan, and especially India have been hit hard as well. South Asia has become a pandemic ground zero, despite emerging relatively unscathed last year, when the virus took its greatest toll in the United States and Europe.

When COVID-19 became a pandemic in March 2020, some public health experts feared the worst for South Asia. Poverty levels are deep, health care infrastructure is fragile and poorly resourced, population density is high, there is considerable migration between regions, and in some areas violence and conflict inhibit vaccination campaigns. Communicable disease travels well in South Asia; in recent years, it has been home to 40 percent of global tuberculosis cases. Even polio, largely a disease of the past, has been diagnosed in Afghanistan and Pakistan over the last few years, albeit in small numbers.

Yet, in 2020, much of the region appeared to have dodged a bullet. The numbers of cases and deaths were lower than in many developed countries. Experts at the time offered various explanations for South Asia’s less serious pandemic crises: young populations, warm weather, and natural immunity to COVID-19 from tuberculosis vaccines. (All of these speculations ultimately proved wrong.) Others cited effective government policies—from a long lockdown in India to closely coordinated responses by the state and society in Bhutan.

In 2021, the tables turned. A highly infectious version of COVID-19, known as the delta variant, was first detected in India last December. It wreaked havoc across the country this spring, even as the Indian government failed to act quickly and encouraged large political and religious gatherings.

The delta variant has spread across the region and beyond like wildfire. It’s the main reason why so many South Asian states are experiencing such devastating COVID-19 waves 16 months after the pandemic began. According to the U.S. Centers for Disease Control and Prevention, the delta variant is present in 104 nations. In South Asia, the crisis is compounded by vaccine shortfalls. Early this year, many South Asian states were promised, and in some cases received, shipments of shots from India, the world’s top vaccine manufacturer. But when India’s catastrophic surge in the spring prompted it to suspend exports, its neighbors were left in the lurch.

Even with South Asia’s COVID-19 struggles this year, experiences have varied across countries. India and Nepal faced full-scale health emergences. Bangladesh may not be far behind. But Bhutan has managed, through this week, to have only two reported COVID-19 deaths in total. Meanwhile, Pakistan’s numbers, despite periodic spurts in new cases, have remained relatively low—though this week brought ominous news that an estimated 50 percent of its cases are the delta variant. Pakistan’s performance has garnered praise from Microsoft co-founder Bill Gates and former U.S. Treasury Secretary Larry Summers and most recently the No. 3 ranking in the Economist’s Global Normalcy Index, measuring how nations have returned to pre-pandemic life.

Unfortunately, COVID-19 has played right into the region’s tensions, from democratic backsliding and communal divides to conflict and geopolitical rivalry. Dhaka cracked down on those critical of its COVID-19 response. New Delhi criticized crowded Muslim gatherings while encouraging Hindu ones. Colombo briefly required that cremations be mandatory for all, even for those belonging to religions that ban them.

At the pandemic’s height, the Taliban scaled up violence, and India and China fought their deadliest border clash in decades. COVID-19 has also become a battleground for Indian-Chinese competition. After India suspended its vaccine exports, China ramped up its own. This week, Beijing announced an emergency COVID-19 supplies stockpile initiative for South Asia.

The good news? The pandemic has inspired some cooperation in a region marked by diplomatic disputes. India briefly provided vaccines. The region’s governments met to discuss joint responses. Pakistan offered to send relief supplies to India.

Such steps are modest. Still, any silver lining is a good thing during a pandemic.

July 19: The Wilson Center hosts a discussion on the future of U.S.-Pakistan relations.

The Taliban assault continues. A furious Taliban offensive shows no signs of letting up. Fighting remains especially intense in the north, and on Monday the Afghan government said 5,600 families had been displaced over the previous 15 days. The Taliban claim they control 85 percent of Afghanistan’s territory. This is likely wrong; the insurgents often exaggerate their battlefield achievements. They have, however, seized dozens of districts since President Joe Biden announced the U.S. military withdrawal in April. On Wednesday, the Taliban seized a key border crossing with Pakistan. In recent days, the insurgents have also captured border crossings with Iran, Tajikistan, and Turkmenistan.

Also this week, CNN released a video purportedly showing Taliban fighters executing 22 Afghan soldiers who had surrendered. (The Taliban denounced the video as fake.) The footage surfaced just days after news emerged of a Taliban assassination campaign targeting off-duty Afghan military pilots. It offers a reminder of the Taliban’s uncompromising brutality—despite repeated assertions by the group’s leaders of support for peace and reconciliation. It also raises unsettling questions about how life will be for Afghans living under Taliban control, post-U.S. withdrawal. On July 8, Biden said the U.S. pullout will be complete on Aug. 31.

Consolidating a family dynasty in Sri Lanka. Last week, Basil Rajapaksa was sworn in as Sri Lanka’s new finance minister. It’s a significant appointment, given the country’s economic struggles. But it also stood out for being yet another case of a Rajapaksa family member taking on a senior government position. Gotabaya Rajapaksa is president and defense minister, and his brother Mahinda is prime minister and religious affairs minister. Their brother Chamal is irrigation minister and holds a senior national security post. Mahinda’s son Namal heads the sports ministry. And Chamal’s son Shasheendra oversees policy for a long list of foodstuffs—a “portfolio,” in the words of the New York Times’ Mujib Mashal, “too long to fit on a business card.”

The Rajapaksas’ deep imprint on the government attests to the enduring presence of family dynasties in South Asian politics. In some cases—the Bhuttos and Sharifs in Pakistan, the Gandhis in India—they’ve fallen on hard times and are in the opposition. In Afghanistan, the Karzai family—led by former President Hamid Karzai—retains strong influence. In Bangladesh, Sheikh Hasina—daughter of the country’s founding leader—has been prime minister since 2009.

Deuba was sworn in on Tuesday, but he must win a parliamentary confidence vote within a month to keep his new job. If he holds on, he could usher in a major geopolitical change. In recent years, Nepal, long a close partner of India, has strengthened ties with Beijing. But Deuba is a strong proponent of India-Nepal relations. His return to power could move the needle on Indian-Chinese competition in a way that benefits New Delhi. 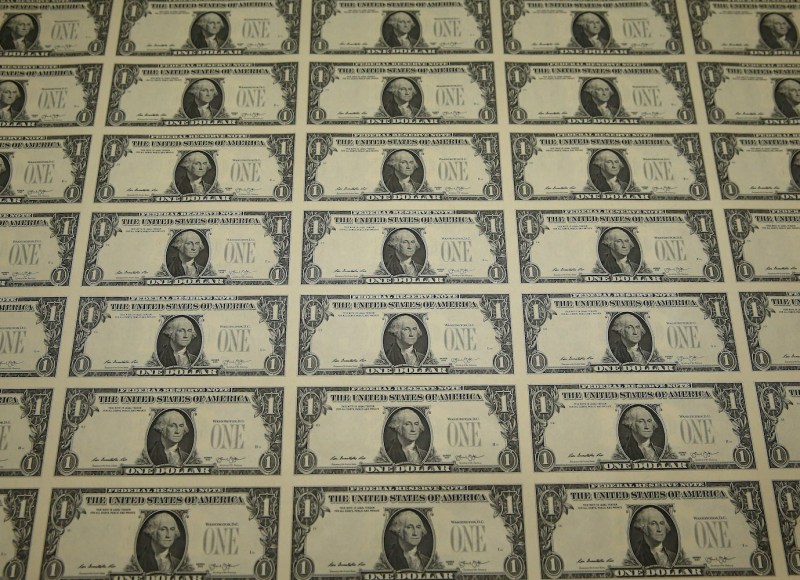 A sheet of freshly printed one-dollar bills lies ready for inspection at the Bureau of Engraving and Printing in Washington on March 24, 2015.Mark Wilson/Getty Images

Two weeks ago, while giving a speech on Bangladesh’s new budget, Prime Minister Sheikh Hasina noted that her government was providing $250 million in loan assistance to Sri Lanka via a currency swap. She was referring to a decision made several months ago that has failed to draw much attention outside South Asia. In May, Bangladeshi officials disclosed that they would draw on the country’s $45 billion in foreign currency reserves—fueled by remittances and garment exports—to respond to a request from Colombo for assistance in shoring up its reserves.

Some Bangladeshi economists downplay the importance of the move—the country’s first-ever currency swap—because the loan amount is relatively small. But it’s a major symbolic achievement for Bangladesh, which has arguably become South Asia’s greatest economic success story, positioning the country to be a donor of aid instead of a recipient. The World Bank projects GDP growth of more than 5 percent for the fiscal year that begins this month, despite the pandemic. Additionally, Bangladesh’s per capita income recently surpassed India’s. The $250 million in assistance showcases the country’s growing status as an influential economic player. The move followed similar—albeit more generous—loan packages to Sri Lanka from China and South Korea, two of the world’s top economies.

“One day, I just thought, I am pretty confident I can draw Tintin, so I just drew Tintin in Dhaka in front of the National Parliament House of Bangladesh.”

What We’re Listening to

In the most recent episode of The Hidden Economics of Remarkable Women (HERO), a new podcast from Foreign Policy, we explore why many women in India are working informally, or under the table, and what can be done to get them more rights, income, and support. Listen here.

The Indian analyst Jelvin Jose describes in South Asian Voices how India’s ruling Bharatiya Janata Party (BJP) regards social media as a core platform to advance its Hindu nationalist goals. “As the BJP seeks to advance its Hindutva agenda,” he writes, “the digital space is its most fertile ground.”

Anuradha Goyal, an Indian author and blogger, laments in the New Indian Express how companies in India prefer to sell new products to consumers instead of simply repairing existing ones. “Waste in general and e-waste in particular are creating havoc for the environment,” she writes, even as these “very companies” use the slogan of “Reuse, Recycle, Upcycle.”

Roshan Kumar Chhetri, a mechanical engineer in Nepal, writes for the Kathmandu Post about the country’s disaster management policies. He praises their digital elements and comprehensiveness but faults them for insufficient technology, poor coordination, and models based on historical assumptions that have “now been rendered obsolete on almost every front.”

NEW FOR SUBSCRIBERS: Want to read more on this topic or region? Click + to receive email alerts when new stories are published on Pandemics, India, South Asia

Will Washington Invest in Its Neighborhood?

Colombia Counts Down to a Historic Presidential Election

Will Washington Invest in Its Neighborhood?

Colombia Counts Down to a Historic Presidential Election