European soccer administrators have stifled the beautiful game. It’s time to rein them in. 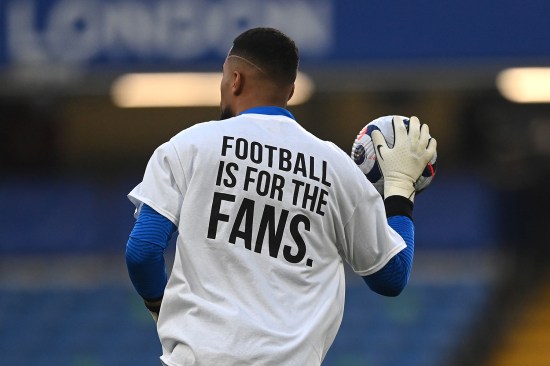 Soccer—even more than wine, cheese, or trashy Eurovision songs—is Europe’s most powerful cultural export. Some 400 million people worldwide tune into the Champions League final every year, four times as many as the Super Bowl. Yet despite the sport’s global success, it faces similar issues as the rest of Europe’s economy: a calcifying regulatory burden where bureaucratic politics trumps the interests of companies and consumers—in this case, soccer clubs and their fans.

Earlier this month, a Spanish judge ruled for a second time against the Union of European Football Associations (UEFA)—the Europe-wide body that sets rules and controls competitions—and its attempts to discipline the 12 clubs that attempted to break away in April and form their own European Super League. The plan quickly collapsed after a furious backlash from fans and politicians across Europe, most notably against the proposal that the 12 founding members would automatically qualify for the league in perpetuity. In the 48 hours between the Super League announcement and the first clubs dropping out, UEFA was able to position itself as European soccer’s defender. Yes, the Super League was a deeply flawed and poorly executed idea. But its near-universal rejection should not preclude a serious discussion about the future of soccer in Europe—and, above all, the need for UEFA’s wholesale reform.

The commercial reasoning was sound—but the culture clash doomed plans.

UEFA is too rich for its own good. The organization’s revenue has grown consistently for the past decade. This season—including the Euro 2021 tournament that just concluded with Italy beating England for the title—will likely gross close to $5.9 billion. Yet by any other metric, UEFA is doing a poor job of overseeing European soccer. The reason for this failure lies in its dual incentives: It is nominally an administrative body tasked with the good of the game, but it is also one of the world’s most successful event promoters, receiving commercial and television income from some of the world’s most popular sporting events to distribute it as it sees fit. Soccer fans and clubs are left with the worst of both worlds: They have no say in electing a body ostensibly run for their interest but cannot take their business elsewhere when UEFA fails to look out for them—as most clearly demonstrated in 2015, when a vast corruption scandal involving soccer administrators resulted in lengthy bans against the then-presidents of UEFA and its global cousin, the infamous FIFA. 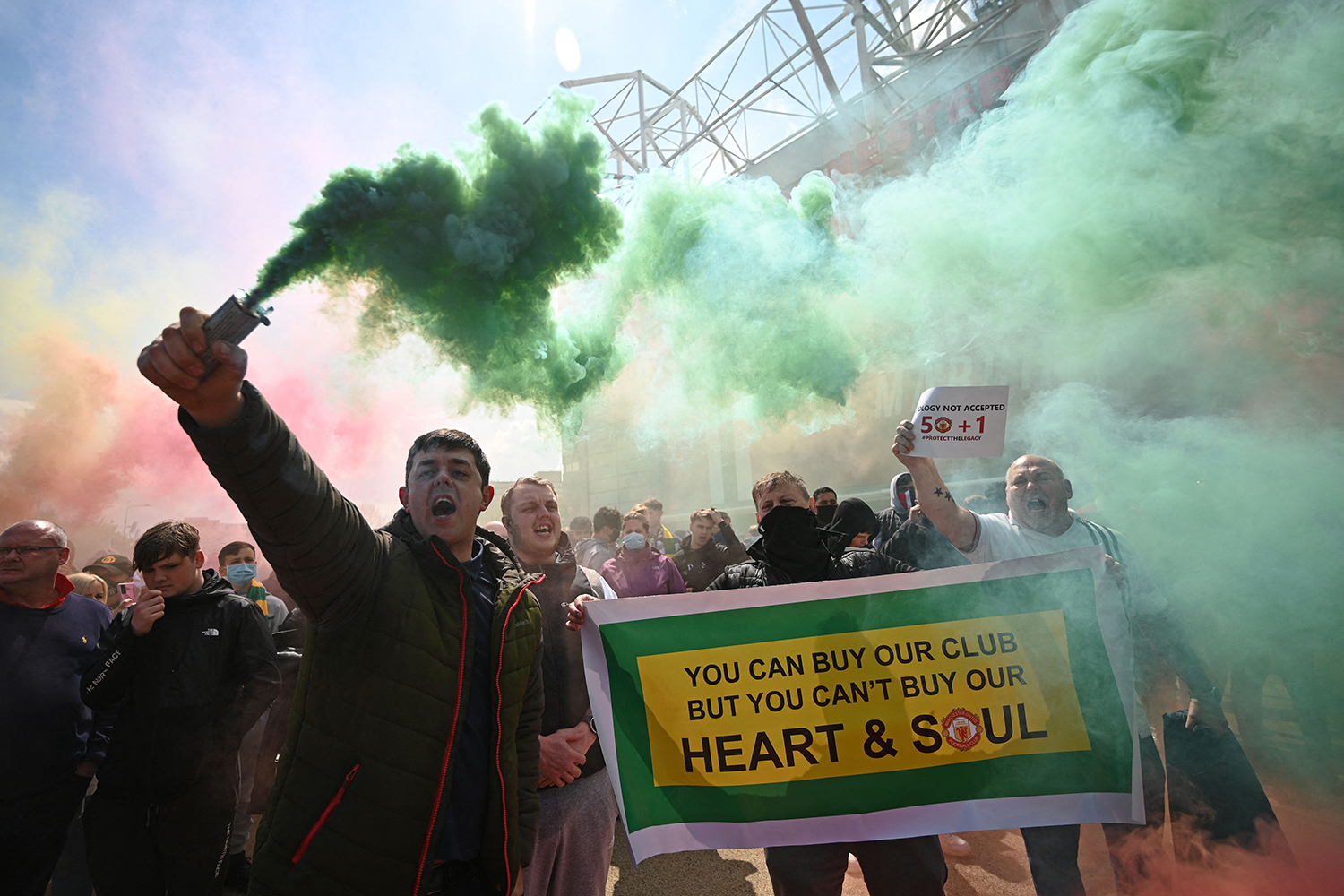 Fans protest against Manchester United’s owners—who had signed up for the breakaway European Super League tournament—outside Old Trafford stadium in Manchester, England, on May 2 ahead of the English Premier League fixture against Liverpool. OLI SCARFF/AFP via Getty Images 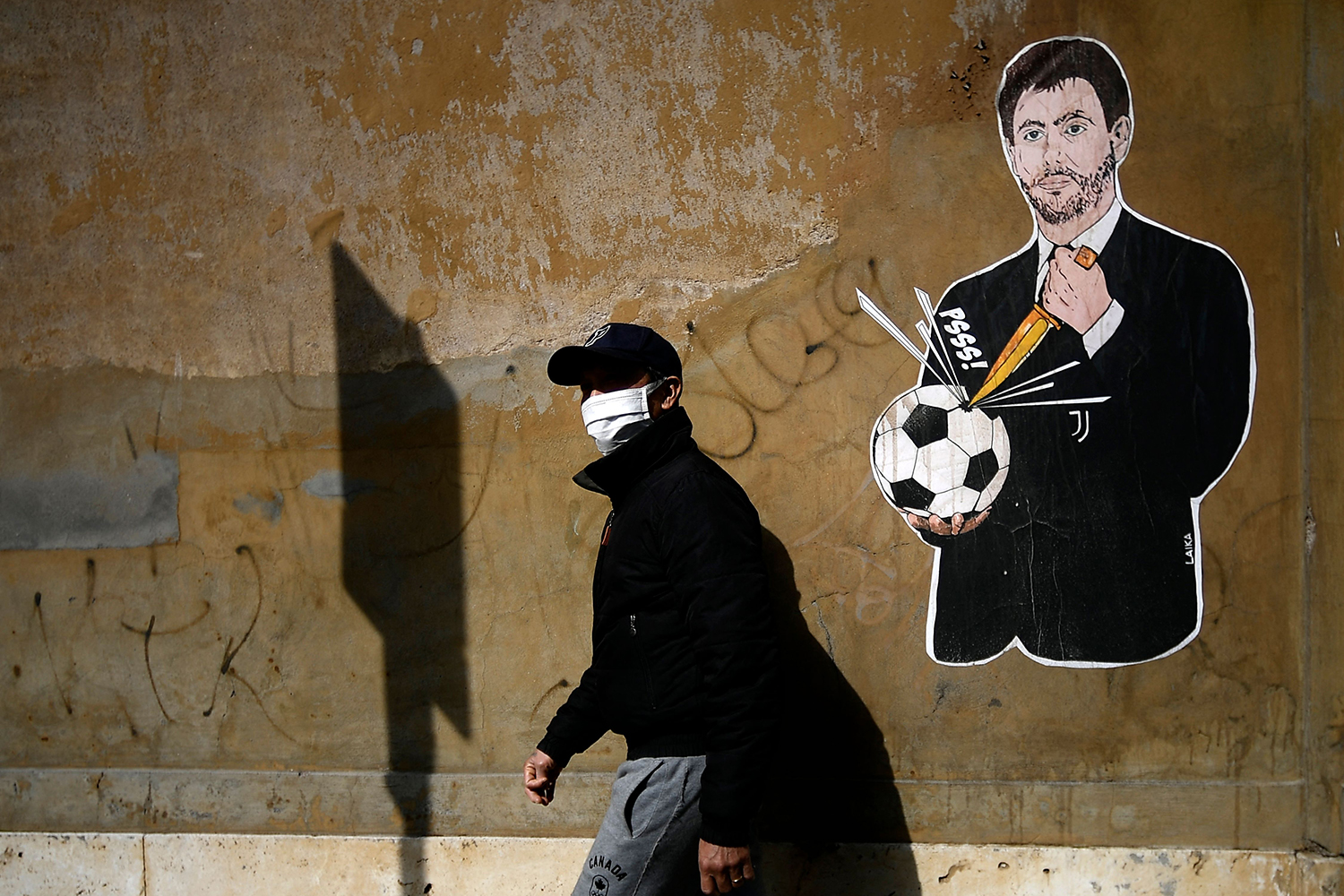 A man walks past graffiti entitled “The Failed Coup” by Italian artist Laika, showing Juventus President Andrea Agnelli puncturing a soccer ball near the headquarters of the Italian Football Federation in Rome on April 21. Juventus was one of the driving forces behind the new European Super League. FILIPPO MONTEFORTE/AFP via Getty Images

Meanwhile, the balance of competition across Europe’s national soccer leagues has been declining for many years. A small handful of top teams—invariably the richest clubs with the most money to buy the best players—are winning an ever-larger share of matches in their domestic leagues, resulting in less interesting competitions and fewer opportunities for thrilling upsets, such as dark horse Leicester City winning the English Premier League in 2016. Over the past decade, the top leagues in France, Italy, and Germany have each been dominated by a single team: Paris Saint-Germain, Juventus, and Bayern Munich, respectively. Spanish soccer is a duopoly of Barcelona and Real Madrid, despite Atlético Madrid’s recent successes. The same is true of Europe-wide club competitions, where no team from outside Europe’s big five national leagues has made it to a final since 2004.

This predictability has led to a glut of meaningless games. Players, fans, and managers all agree UEFA is staging too many games, especially at the national level, with its predictable outcomes. But to UEFA, every opportunity for revenue is one worth taking. The issue of overscheduling has been exacerbated by COVID-19’s interruption, which shifted games and crunched the schedule. Too many games can have serious consequences for players: Last month, the soccer world was shocked when Danish midfielder Christian Eriksen collapsed from cardiac arrest on the pitch during the Euro group stages. In a normal season, Eriksen would play around 50 games; Denmark against Finland was the 66th competitive game he had played in the last 12 months. Prior to the tournament, Manchester City manager Josep “Pep” Guardiola had complained that “UEFA and FIFA kill the players” through overscheduling. Thankfully, Eriksen is recovering well, but it should not require a near-tragedy experience to pay greater attention to player health. 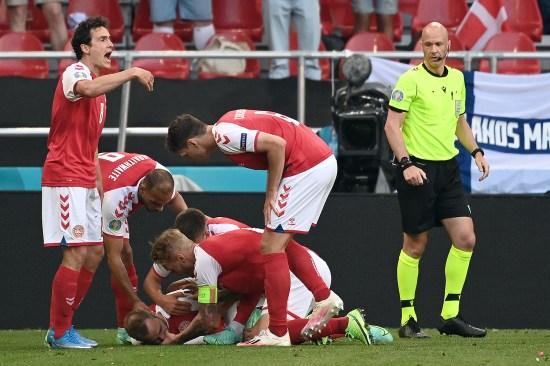 Denmark’s players help midfielder Christian Eriksen after he collapsed during the UEFA EURO 2020 Group B soccer match between Denmark and Finland at the Parken Stadium in Copenhagen on June 12. JONATHAN NACKSTRAND/AFP via Getty Images

UEFA’s much advertised flagship reform has been the Financial Fair Play program, which prohibits clubs from spending more on players’ wages and transfer fees than they earn in operating revenues. Financial Fair Play has a laudable goal: It aims to stop clubs from going into debt in pursuit of glory and collapsing financially—as most famously happened in the early 2000s, when Leeds United, one of England’s most storied clubs, had to seek protection from its creditors after assembling an expensive, briefly successful team. In practice, the new rule is anti-competitive: Manchester United’s revenues are more than triple those of the median Premier League club. Financial disparities are even greater in other European leagues—and so UEFA’s new rule is simply cementing the hierarchy, which is anything but fair play. And as research by Financial Times columnist Simon Kuper and economics professor Stefan Szymanski shows, the size of a club’s wage bill is the strongest predictor of its on-field success. There is no Moneyball scenario in soccer, whereby a club can execute better than its peers and consistently succeed despite a smaller budget—the gaps are just too large.

Following the Super League fiasco, the British government launched an inquiry into soccer governance, promising to consider the possibility of an independent regulator to manage the game. Regulators, fans, and clubs should use April’s controversy and the new focus on governance to make meaningful reforms—and avoid simply returning to UEFA’s status quo of ham-handed regulations and past ways of corruption.

What fans want and what players deserve are matches that matter—which requires increasing the quality of competition, reining in greed, and cutting back on overscheduling. Take, for instance, UEFA’s proposals to modify the existing Europe-wide Champions League by increasing the size of the group stage from 32 teams to 36 teams and adding four extra group stage games to each team’s season. This serves UEFA’s purposes well, since it gives a place at the top table to more clubs, satisfies national leagues that were underrepresented, and raises more revenue with more matches. But what fans and players want is fewer games, matches between the continent’s elite clubs, and more at stake.

There are two clear reforms that can achieve these goals. Reducing the number of group stage games that determine what teams advance to the knockout rounds and playing more of the latter—the exact opposite of UEFA’s proposal—would create more high-stakes games without placing undue demands on players. Allowing more teams from the top five leagues into the qualifying rounds would satisfy fans’ preferences for watching top clubs without denying teams from smaller nations a chance to compete. Unlike UEFA’s proposed reforms, these changes would improve the quality of tournaments, safeguard players, and benefit clubs. If European administrators do not do a better job of regulating the beautiful game, they should not be surprised when their positions are threatened.

Nicholas Kumleben is a senior analyst at GreenMantle. Twitter: @nkumleben