A web of treaties, agreements, and nonprofits is dedicated to curbing nukes. Some hope to get rid of them altogether. 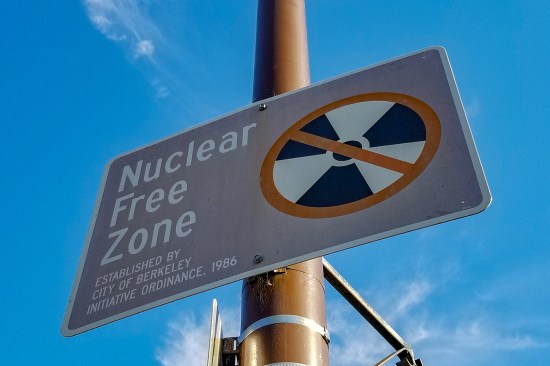 A sign designates the area as a nuclear-free zone, a symbolic designation meant to resist nuclear power and nuclear weapons, in Berkeley, California, on Dec. 7, 2018. Smith Collection/Gado/Getty Images

A sign designates the area as a nuclear-free zone, a symbolic designation meant to resist nuclear power and nuclear weapons, in Berkeley, California, on Dec. 7, 2018. Smith Collection/Gado/Getty Images

Nuclear weapons are, without a doubt, the most indiscriminate and inhumane weapons ever conceived. Even a small-scale nuclear conflagration could have devastating global repercussions, which explains the extraordinary efforts to rein them in. They are also technically illegal: The recently concluded Treaty on the Prohibition of Nuclear Weapons is the first multilateral, legally binding agreement to ban their development, production, testing, stockpiling, use, and threat of use. Despite the treaty being quietly adopted in 2020 and entering into force this year, it is not universally supported. None of the world’s nine nuclear powers have signed or ratified the agreement. In the world of nuclear arms control, it turns out this is par for the course. Those who have such arms like to keep them. The only country that ever voluntarily gave up its nuclear weapons is Ukraine, which inherited them during the breakup of the Soviet Union.

Although only a few countries actually possess nuclear warheads, most states are involved in international measures to restrain their design, development, and deployment. The most important of these efforts is the Treaty on the Non-Proliferation of Nuclear Weapons (NPT). Negotiated between 1965 and 1968 and in force since 1970, the NPT was established to prevent the spread of nuclear weapons, promote the peaceful use of nuclear energy, and advance the goals of complete nuclear disarmament. It was extended indefinitely in 1995 and, despite the defection of North Korea in 2003, continues to hold up.

Yet most efforts to contain the spread and use of strategic nuclear weapons have been patchy. Despite a slew of nuclear arms control agreements and nuclear weapon-free zones, the international community has yet to rid itself of nuclear threat. Today, roughly 90 percent of the world’s estimated total arsenal of 13,500 nuclear warheads are held by the United States (5,800 warheads) and Russia (6,375 warheads). The rest are distributed between other NPT signatories, such as China (320 warheads), France (290 warheads), and Britain (215 warheads), as well as non-signatories like Pakistan (160 warheads), India (150 warheads), Israel (90 warheads), and North Korea (30 to 40 warheads). Roughly 9,500 of these are believed to be in active military service, including on bombers and submarines, with the rest supposedly awaiting dismantlement.

Not surprisingly, nuclear-armed countries are among the least committed to nonproliferation efforts; one exception is the United States.

Measures to restrict the development of tactical nuclear weapons—those that could be used as battlefield weapons as opposed to long-distance “strategic” strikes—have failed. Indeed, they are among the least regulated category of nuclear weapons in existing arms control arrangements. Despite announcing their intentions to eliminate their inventories of ground-launched tactical nuclear weapons in 1991, the United States and Russia have made limited progress. It is true that thousands of tactical nuclear weapons have been withdrawn and disassembled. But since no treaties covering this class of weaponry have been signed, there are no reporting requirements and progress cannot be verified. These armaments are intended for use alongside conventional forces; therefore, they are potentially an even more dangerous threat than strategic nuclear weapons. Experts believe nukes designed for the heat of battle could make escalation from conventional weapons more tempting.

Given the scale of the threat posed by both strategic and tactical nuclear weapons, policymakers and scholars have devoted enormous energy to building an international arms control regime to restrain their spread and use. So what does this ecosystem of nuclear arms control look like? The Carnegie Endowment for International Peace, the Center for Strategic and International Studies, the European Parliament, the Global Governance Monitor, and the Nuclear Threat Initiative have usefully documented the relationships between actors (including countries, multilateral bodies, and nongovernmental organizations) and instruments (for example, nonproliferation and nuclear arms control agreements). Building on their contributions, the Igarapé Institute and SecDev Group developed a network map to highlight the form and function of relationships operating across the nuclear nonproliferation ecosystem.

There are multiple and overlapping norms, rules, and decision-making procedures designed to restrict the proliferation of nuclear weapons and related technologies. Our assessment is far from exhaustive: It considers just 15 instruments involving a range of actors, including roughly 100 countries and 50 leading international nongovernmental organizations. There are, of course, dozens more states and hundreds of other organizations involved to a greater or lesser degree on matters of nonproliferation, but our assessment limits the field for the sake of clarity.

Predictably, some instruments exhibit more connectedness than others. Some agreements may have just two parties (like the Indian-U.S. nuclear deal signed in 2008) while others have more than 200 parties (like the New Strategic Arms Reduction Treaty (New START) signed in 2010 and extended for another five years in 2021). The NPT features extremely high connectivity with 195 state parties (194 countries plus the Vatican) and one non-signatory party (Pakistan). In addition to being overseen by the International Atomic Energy Agency (IAEA), the NPT is also connected to several major nongovernmental bodies and the so-called Middle Powers Initiative, a coalition of respected middle powers and nongovernmental organizations devoted to reducing reliance on nuclear deterrence and promoting negotiations to eliminate nuclear weapons. Like-minded states and nonprofits play an important role in advocating for fulfilling treaty obligations, especially when it comes to reporting on progress at periodic review conferences.

This map visualizes the connections between 15 nonproliferation and nuclear arms-control agreements (“instruments”) and a range of actors, including roughly 100 countries and 50 leading international nongovernmental organizations, as of June 3.

An especially powerfully connected instrument is the International Campaign to Abolish Nuclear Weapons (ICAN), a Nobel Peace Prize winner in 2017. Created in 2007 to draw attention to the catastrophic humanitarian consequences of using nuclear weapons, ICAN features at least 123 connections, including 85 state supporters. Headquartered in Switzerland, the alliance also has assembled 468 partner organizations across more than 100 countries. Notably, unlike New START or the NPT, no declared nuclear-armed states are members of the campaign. By contrast, seven nuclear-armed states and 88 other countries have signed up to the non-legally binding Global Initiative to Combat Nuclear Terrorism initiated in 2006. These and other networks are working with nuclear states to raise their level of ambition, strengthen verification and compliance with treaties, and eventually abolish nuclear weapons altogether.

Not surprisingly, nuclear-armed countries are among the least committed to nonproliferation efforts. One exception is the United States, which—as our visualization shows—is signed up with seven instruments, of which three instruments are bilateral (specifically, the New Strategic Arms Reduction Treaty with Russia, the Joint Statement with South Korea, and the Indian-U.S. Nuclear Deal). Another U.S. connection is with a small cluster of states (the Joint Comprehensive Plan of Action focused on Iran), and the rest are multilateral. Other countries with high levels of connectivity in the nonproliferation ecosystem include nonnuclear powers, such as Mexico, New Zealand, and South Africa, each connected to six treaty networks.

Nonnuclear middle powers appear to be more connected—and potentially committed—to nonproliferation initiatives. This is predictable given they have less at stake when it comes to disarmament. When we examined our visualization, we were therefore not surprised that we found not a single nuclear country among the top 64 most connected states. That doesn’t mean these instruments are ineffective. Far from it; they can establish new legal and political standards against which all nuclear policies can be judged. In fact, the strength of the opposition to a treaty is a potential indicator of its importance.

Deeper insight into the networks driving nonproliferation can potentially strengthen and empower network hubs. Not only does it help states and nongovernmental organizations bolster their campaigning efforts, but it can provide direction for financial institutions, pension funds, and other businesses to divest from countries and companies that support nuclear weapons. More than 77 companies, including ABP Capital, Deutsche Bank, Kyushu Financial Group, Nippon Life, and the Government Pension Fund of Norway, have started divesting from the nuclear arms industry. This is significant when one considers private firms invested almost $750 billion in the production, maintenance, and modernization of nuclear weapons technologies between 2017 and 2019 alone.

Ultimately, the power and potential of nuclear nonproliferation networks and impact hubs urgently require more investigation. There is very limited public information on the extent of nuclear power compliance with existing instruments. The IAEA has only reported a handful of instances of noncompliance, and even the definition of what constitutes a breach is opaque. It is also difficult to attribute the influence of nongovernmental organizations—whether as advocates or mediators—on state behavior. And there is only minimal evidence of the financial contributions of countries to nuclear nonproliferation. To verify the influence of networks and agreements on reducing the threat of nuclear weapons, greater disclosure is essential.

Katherine Aguirre, a researcher at the Igarapé Institute, contributed to this article.

Peter Schmidt is a research fellow at the Igarapé Institute.