How Soviet artists evaded censors to create their own visions of Tolkien. 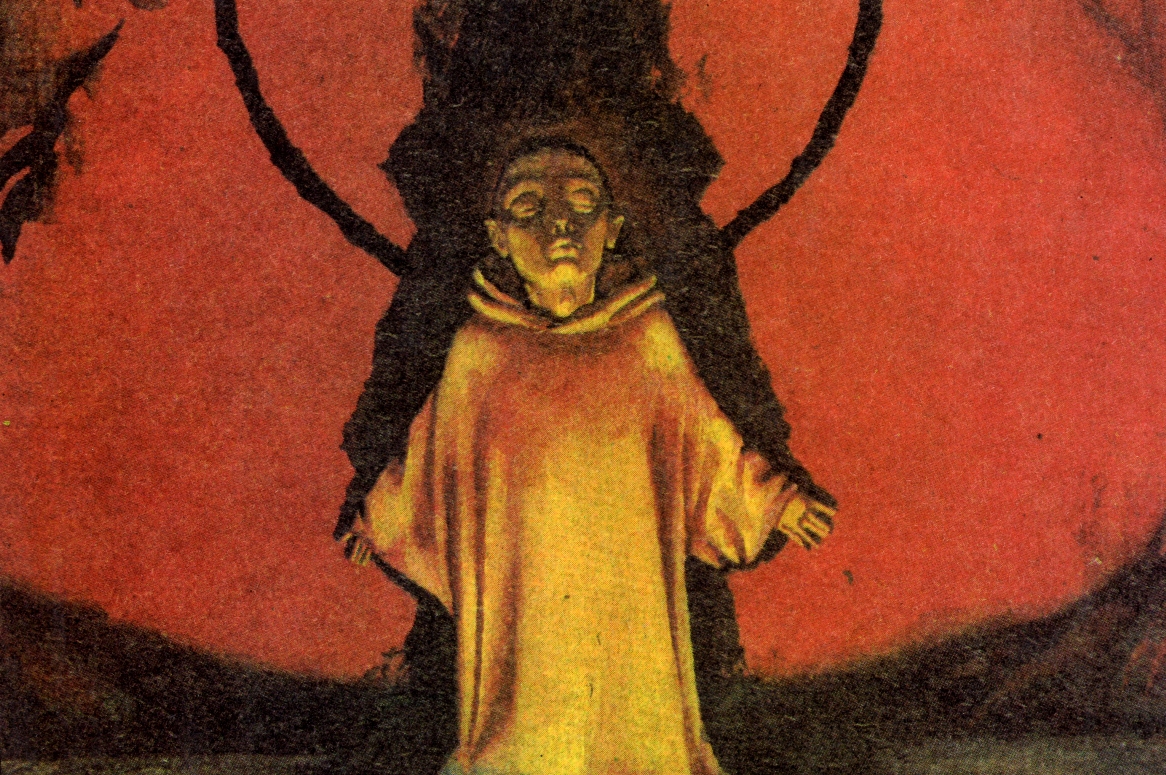 Frodo stands before the Cracks of Doom in Sergei Iukhimov’s cover illustration for Volume I of Vlastelin Kolec, Natalya Grigor’eva and Vladimir Grushetskij’s two volume 1993 translation of J.R.R. Tolkien’s The Lord of the Rings.

It has been 20 years since the premiere of film director Peter Jackson’s The Fellowship of the Ring. As Amazon approaches completion of principal photography on season one of their $465 million TV reimagining of J.R.R. Tolkien’s Second Age, a continuation of the epic neo-medieval visuals that have become synonymous with Middle-earth appears inevitable.

Frodo stands before the Cracks of Doom in Sergei Iukhimov’s cover illustration for Volume I of Vlastelin Kolec, Natalya Grigor’eva and Vladimir Grushetskij’s two volume 1993 translation of J.R.R. Tolkien’s The Lord of the Rings.

It has been 20 years since the premiere of film director Peter Jackson’s The Fellowship of the Ring. As Amazon approaches completion of principal photography on season one of their $465 million TV reimagining of J.R.R. Tolkien’s Second Age, a continuation of the epic neo-medieval visuals that have become synonymous with Middle-earth appears inevitable.

However, the emergence in April of Leningrad TV’s Khraniteli (“Keepers”), a “lost” two-part 1991 Soviet television retelling of Volume I of The Lord of the Rings, has provided Western and young Russian Tolkien fans alike with brief but colorful insight into an alternative vision of the tale. This delightfully lo-fi production, with its earworm opening song, rudimentary special effects, and cobbled together costumes, has been labeled by some as symptomatic of a country on the brink of collapse. But, in fact, Khraniteli represents a rich sub-culture of resourcefulness and creativity in the face of oppression: the world of Soviet Tolkien.

Tolkien’s The Fellowship of the Ring was published in the U.K. on July 29, 1954, with The Two Towers and The Return of the King following in quick succession. The first foreign language editions of the trilogy arrived soon after, including Swedish author Ake Ohlmarks’s controversial 1959 translation, Harskarringen. Ohlmarks’s text was a particular source of irritation to Tolkien, not least because of the translator’s insistence that the dark lord, Sauron, was an analogue for former Soviet leader Joseph Stalin. Tolkien refuted Ohlmarks’s remark, writing in a 1961 letter to his publishers, Allen & Unwin, that such allegory was “entirely foreign” to his thought. He repeated the sentiment in his foreword to the 1966 second edition of The Lord of the Rings, stating that he disliked allegory “in all its manifestations.” The issue would resurface again, however, when The Lord of the Rings reached the Soviet Union.

As noted by Russian scholar Olga Markova, interest in Tolkien’s tale grew quickly behind the Iron Curtain. The first Soviet readers were primarily philologists and translators, individuals who were keen to explore the literary and philosophical elements of the books. For them, The Lord of the Rings offered an escape route out of socialist realist literature into a rich and colorful alternative world.

Soviet authorities, however, were extremely suspicious of what they perceived as a thinly veiled Cold War parable, particularly one that pitched bourgeois country gents (Hobbits), bearded mystics with a suspicious ability to heal ailing royalty (Gandalf), and hereditary monarchs (Aragorn, Théoden, etc.) against an industrialized Eastern nation presided over by an omniscient ruler. Consequently, The Lord of the Rings was barred from publication in the Soviet Union, with any extant English copies of the trilogy consigned to secret KGB holding archives called spetskhrany.

Fortunately, there were individuals determined to bring Tolkien’s epic to the Russian reader. Among these was Zinaida Bobyr, a translator working on the popular science magazine Tekhnika Molodezhi (“Technology for the Youth”). Bobyr’s plan for The Lord of the Rings was simple: She would condense and repackage the trilogy in a form that suited the requirements of the Main Directorate for Literary and Publishing Affairs, known as Glavlit, the Soviet censor. According to Markova, this meant repurposing the tale as a science fiction story complete with an added cast of scientists and engineers (purloined from Stanislaw Lem’s 1958 novel Eden) and a One Ring transformed into a pseudoscientific energy-storing device. When this bizarre attempt was refused, Bobyr opted for a fairy story format, throwing in a magical Númenoreon crown to sweeten the deal. Again, she was denied, leaving her with little recourse but to distribute her manuscript, entitled Povest’ o Kol’tse (“The Tale of the Ring”), in samizdat form.

This was a risky move. Outlawed by the Soviet authorities, samizdat was a clandestine underground press, concerned with the copying and distribution of banned literature. To possess or circulate such material was to risk prosecution. Regardless, Bobyr made several copies of her manuscript and distributed them covertly among a cadre of like-minded individuals. Later, as documented by Mark Hooker, fellow translators Aleksandr Gruzberg, Natalya Grigor’eva, and Vladimir Grushetskij followed suit, flirting with arrest to create samizdat editions that were, mercifully, more faithful to Tolkien’s original.

During this period, interest had also been growing in Tolkien’s earlier work The Hobbit, or There and Back Again (published in 1937). A short excerpt from the story had been permitted to appear in Angliya (“England”) magazine in 1969, and in 1976, publishing house Detskaya Literatura was given the official go-ahead to publish Natalia Rakhmanova’s complete translation: Khobbit, ili Tuda I Obratno. Although Khobbit was regarded as a less contentious work than its successor, its pages were still scoured with East-West references. This included altering the compass rose on illustrator Mikhail Belomlinsky’s redrawn version of Tolkien’s Thror’s Map. Whereas the original map had featured a “Dwarvish” compass rose, with East at the top pointing toward the evil dragon Smaug, Belomlinsky’s version reverted to North at the top, neatly sparing the blushes of party officials.

Belomlinsky’s lively scraperboard illustrations for Khobbit represented one of the first flowerings of Tolkien visual culture in the Soviet Union. His jovial, round-faced Bilbo was especially admired for his close resemblance to the beloved film and stage actor Yevgeny Leonov, a detail that quickly endeared The Hobbit to his Soviet audience.

Detskaya Literatura made another breakthrough in 1982 with the publication of Vladimir Murav’ev and Andrej Kistyakovskij’s Khraniteli (“Keepers”), the first state-sanctioned Soviet translation of The Lord of the Rings and inspiration for Natalya Serebryakova’s viral 1991 TV production. Khraniteli was not a full translation of all three volumes but rather an abridged retelling of The Fellowship of the Ring, complete with maps and illustrations by Gennady Kalinovsky. Murav’ev and Kistyakovskij adopted an inventive approach to their translation of Tolkien’s original nomenclature, rechristening Baggins as Torbins (from torba “bag”), the Shire as Khobbitania, and the Fellowship as the eponymous Khraniteli Kol’ca, “Keepers of the Ring.” They also gave the tale a darker, grittier tone, hinting at real-world political issues. Kalinovsky’s illustrations added a further dimension in the form of semi-abstract Cyrillic chapter initials, which complemented the narrative without signposting its potentially awkward content. 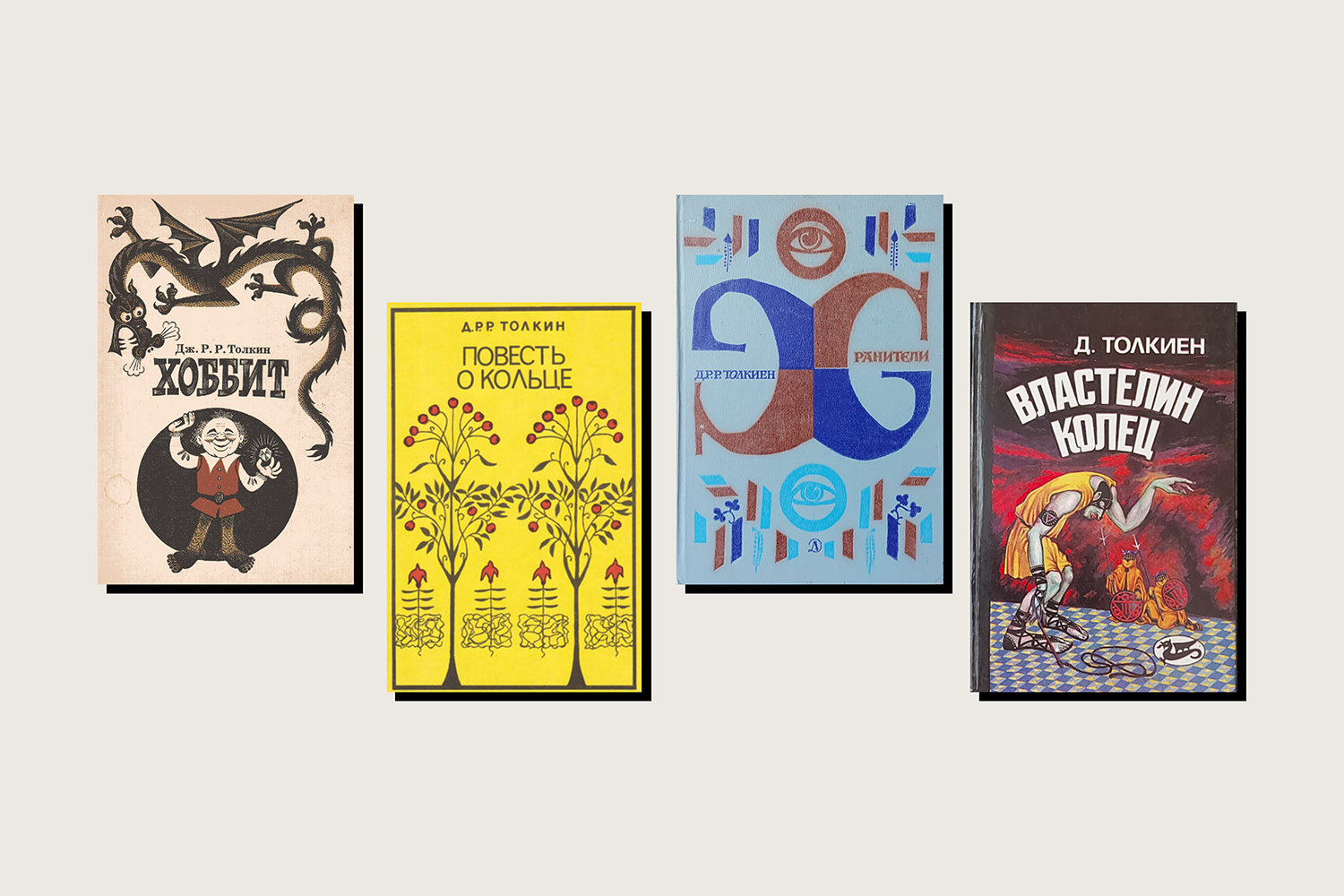 Khraniteli was extremely successful, selling more than 300,000 copies across three print runs. Unfortunately, a hiatus followed its publication that would last until the 1990s when Murav’ev’s solo translation of the full trilogy was finally released. In the meantime, Soviet Tolkien fans were forced to console themselves with samizdat manuscripts or smuggled foreign editions.

One such fan was Ukrainian artist Sergei Iukhimov. Iukhimov had started producing illustrations based on his reading of Khraniteli in the mid-1980s but found his artistic vision hindered by the lack of a complete story to work from. With options limited in his hometown of Odessa, Ukraine, he eventually settled for a Polish edition of the trilogy and, with the help of a Russian-Polish dictionary, set about painstakingly translating the entire work.

In the ensuing years, Iukhimov created more than 100 full color Tolkien illustrations. His vision of Middle-earth remains one of the most complex and nuanced to date, rivaling that of any Western Tolkien illustrator. In his images, medieval and modern motifs combine to form mosaic-like compositions where Biblical Elves rub shoulders with Dickensian Hobbits and punkish Orcs roam sinister tiled settings reminiscent of Soviet-era hospitals. Although Iukhimov’s art can appear strange to Western viewers, his creative approach has comparisons with Tolkien’s own. Just as Tolkien’s philological enquiries underpinned his literary creation, contributing to its sense of depth, so Iukhimov’s use of historical imagery imparted a similar feel to his illustrations.

Iukhimov’s biggest publishing success came in 1993 when 32 of his images were included in a new version of Grigor’eva and Grushetskij’s samizdat translation, Vlastelin Kolec (“The Lord of the Rings”). This two-volume edition was released as part of the upsurge in Tolkien publishing that followed the dissolution of the Soviet Union. The same explosion of interest had already seen Bobyr’s The Tale of the Ring repackaged for a new audience, together with the publication of two other weighty editions of Vlastelin Kolec, affectionately referred to as the “Yellow Brick” and the “Blue Brick.” The latter version featured illustrations by Denis Gordeev, an artist whose Tolkien imagery would eventually bridge the divide between Eastern and Western styles.

It can be tempting to pigeonhole Soviet Tolkien adaptations as weird or comical expressions of a dysfunctional society. But this does them a disservice. Soviet Tolkien was not a sad indictment of communism. It was an example of what was possible when talented, resourceful individuals defied the odds to recreate something they loved. Tolkien, himself, often referred to his fantasy world as a “sub-creation,” namely an imaginary, subsidiary world existing inside of a real one. Soviet Tolkien, with its many variations on the author’s original themes, replicates this in a microcosm.

Modern blockbusters like the Amazon series or Warner Bros.’s new anime fantasy The War of the Rohirrim may appear to have little in common with the cheerful theatrics of TV Khraniteli or Frodo Torbins of Khobbitania. However, when their productions hit a creative wall, they could do worse than look to the East for inspiration—to the writers and artists who brought Tolkien to the Soviet Union.

Joel Merriner is a PhD researcher and associate lecturer in Art History at the University of Plymouth.

Is Joe Biden Missing a Team of Rivals?