Another group of U.S. allies fears they’ll be forgotten as the United States winds down forever wars.

Welcome to Foreign Policy’s SitRep! First off, hats off to Rep. Sean Casten and singer Fergie for making the Federal Energy Regulatory Commission cool again. (Although when were energy regulators ever not cool?)

Here’s what’s on tap for the day: Iraqi interpreters want an Afghan-style evacuation, Congress wants the Biden team to study up on China, more Biden ambassador nominees are coming out, and a look at who’s who in the Russian military.

Welcome to Foreign Policy’s SitRep! First off, hats off to Rep. Sean Casten and singer Fergie for making the Federal Energy Regulatory Commission cool again. (Although when were energy regulators ever not cool?)

Here’s what’s on tap for the day: Iraqi interpreters want an Afghan-style evacuation, Congress wants the Biden team to study up on China, more Biden ambassador nominees are coming out, and a look at who’s who in the Russian military.

The first plane full of Afghan interpreters being evacuated by U.S. President Joe Biden’s administration is set to touch down in the United States early Friday morning, according to Fox News. The administration has allocated $100 million to get 18,000 former interpreters out of the country to U.S. military bases and friendly countries on private flights, a plan the White House has dubbed “Operation Allies Refuge.”

All the while, Iraqi interpreters who helped the United States during the 2003 Iraq War and in the fight against the Islamic State are still waiting for their promised ticket to the United States. Iraqis have not been allowed to submit applications since 2015, and a massive backlog has piled up over the past half decade.

“The vast majority of Iraqis applied through the P-2 visa program,” Matt Zeller, co-founder of No One Left Behind, an advocacy group pushing for the resettlement of Afghan and Iraqi interpreters, told SitRep. “At the current rate of processing, it will take 220 years.” Worse yet, the U.S. State Department suspects as many as 4,000 Iraqis have filed fraudulent resettlement applications, something that could gum up the works even further.

‘We are considered the second enemy.’ But most have precious little time to waste. Iraqi interpreters have been getting more fearful for their safety ever since a U.S.-ordered drone strike took out Iranian Quds Force leader Qasem Soleimani at Baghdad International Airport last year, deepening an ongoing military tit for tat between the U.S. military and Iran-backed proxy groups hoping to speed up a U.S. exit from the country.

“We are considered the second enemy after U.S. forces for the Iran-backed militias,” Ali Alobaidi, who served as an interpreter for U.S. forces during the 2003 Iraq War before working for European forces during the counter-Islamic State campaign, told SitRep. “They consider us spies and agents of the Americans.”

Left behind. With no avenue to get a hearing with the Biden administration and U.S. combat forces set to leave Iraq soon, Alobaidi and his friends have taken to social media to try and get the message out. A group of jilted Iraqi interpreters have set up a group dubbed “Iraqi Interpreters Left Behind” that gins up dozens of messages per day. But as muddled as the Afghan battlefield looks with the Taliban advancing throughout the country, the Islamic State’s rise has likely left many Iraqi interpreters without documents or the ability to prove they helped the United States.

Some advocates who helped push for Afghan evacuations plan to turn their attention to Iraqi interpreters after the U.S. drawdown from Afghanistan is finished. Zeller told SitRep he’s pushing lawmakers to reopen the Iraqi visa program through negotiations over the Defense Department’s authorization bill. It’s an uphill battle. He has yet to get any commitments, and Congress would have to mandate the State Department to begin accepting new applicants.

And even then, they might not get that far: The United States has never accepted more than 4,000 special immigrant visas in a year before 2021. And lawmakers are still wondering what it will take to do the program right.

“The big question they keep asking us is: ‘Okay, well, if we do allow this, if we do turn this back on, how long and how many?’ How many people do you think are going to need it? How long do you think we need to keep this application period open for?” Zeller asked. “Those are really good questions.”

Ely Ratner, the top Pentagon official for the Indo-Pacific, got through late last week as did Heidi Shyu, the Pentagon’s research and engineering chief.

Republicans on the Senate Banking, Housing, and Urban Affairs Committee announced they intend to oppose two of Biden’s Treasury Department nominees, Brian Nelson and Elizabeth Rosenberg, until the administration implements mandatory sanctions on a controversial Russian gas pipeline project. (Background on that here, and a reminder that Sen. Ted Cruz is doing the same with dozens of State Department nominees in the Senate Foreign Relations Committee.)

Trump’s former ambassador to the United Nations, Kelly Knight Craft, has joined the board of the Institute for the Study of War.

Hey SitRep readers: We’re putting in one last call for our summer reading list. Thanks to all who have sent in suggestions so far!

For those who haven’t, send us everything you’ve got, from former U.K. Prime Minister Margaret Thatcher biographies to cool sci-fi reads (that are at least tangentially relevant for the natsec wonks) or from graphic novels and academic journals to Nobel prize-winning poetry and your favorite beach reads.

We’ll winnow it down and publish our list with all of your recommendations next week—just in time for your beach vacation.

All in for open-source intelligence. At the height of the Cold War, the CIA ran an open-source intelligence unit called the Foreign Broadcast Information Service that translated and distributed Soviet and other foreign government statements and media. Now, a group of lawmakers, led by Democratic Reps. Joaquin Castro and Bill Keating and Republican Reps. Mike Gallagher and Brian Fitzpatrick, want to revive that concept, with an aim toward establishing a new government center that would translate and freely publish foreign government reports, documents, and state media articles for policymakers and media alike—with a special focus on China.

The new legislation allocates $85 million to stand up the Open Translation and Analysis Center in the first year, Fiscal Year 2022, and then $80 million for FY2023 through 2026. It’s already got some high-profile endorses, including David Stilwell, the former top State Department envoy for East Asia during the Trump administration, who feels there’s a major gap in how most Americans, researchers, and media understand China and how China views itself.

Quid pro oh no. In the latest sign that China is using its vaccine stocks as a blunt tool for geopolitical pressure, news emerged this week that Beijing pressured Ukraine to drop support for international condemnation of its genocide against ethnic Uyghurs in the country’s Xinjiang province. How? By threatening to curb trade with Ukraine and withhold access to COVID-19 vaccines, as Radio Free Europe/Radio Liberty’s Yevhen Solonyna and Reid Standish reported.

Grounded. One big new trend we’ve been reporting on recently is Congress’s eagerness to claw back the reins of foreign policy from the executive branch after decades of taking the backseat. The latest example is on the arms control front. The top Democrat and Republican on the Senate Foreign Relations Committee are holding up a major arms sale deal with Nigeria the State Department first brought forward in January, which Robbie scooped this week.

Lawmakers are blocking an $875 million arms deal for Nigeria to acquire 12 attack helicopters to assist in its fight against the Boko Haram terrorist group; they’re concerned about Nigeria’s recent bent toward authoritarianism and the Nigerian military’s less-than-stellar human rights record. 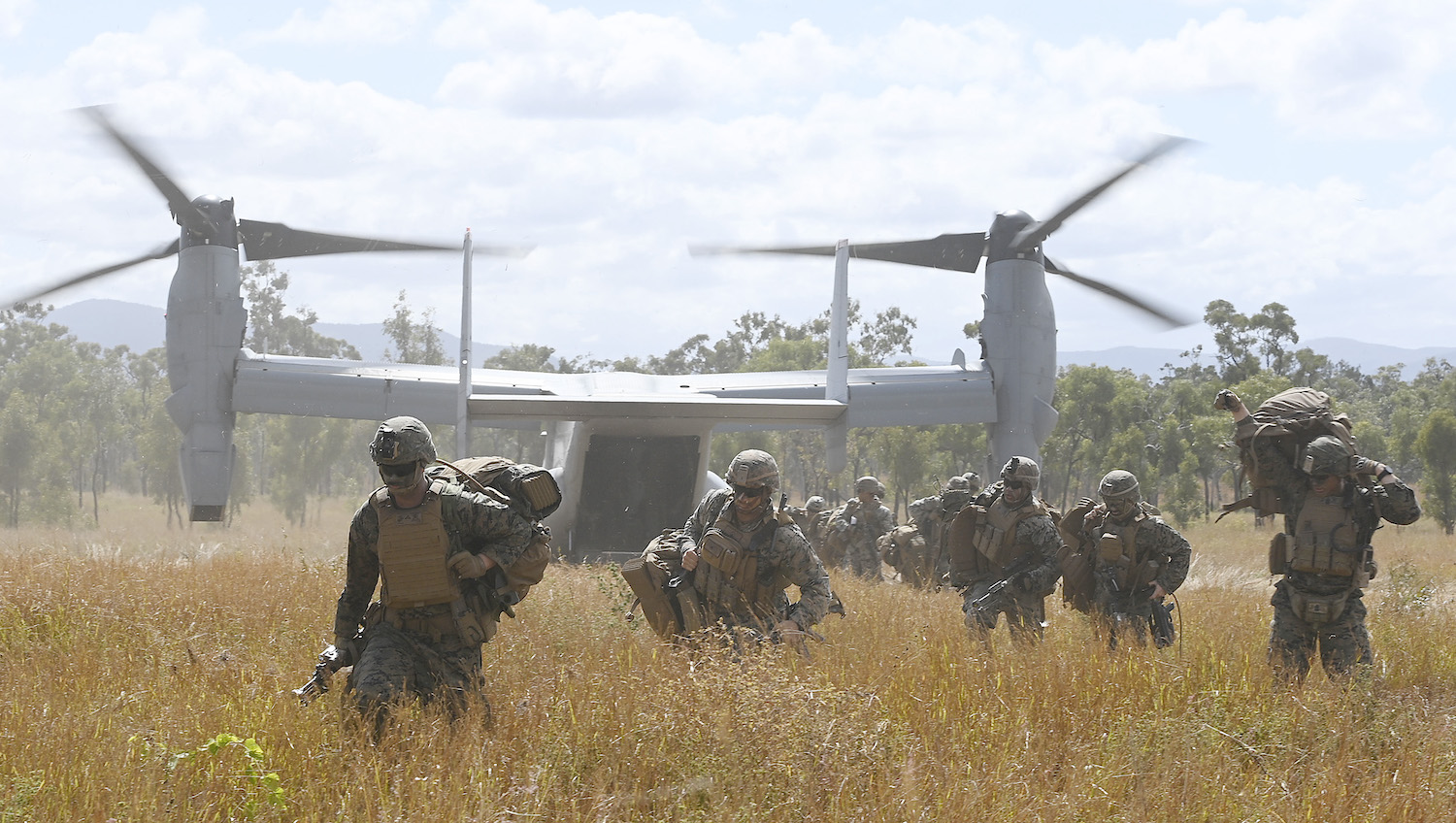 Inside baseball. Russia security expert Kirill Shamiev has a fascinating new report out for the Center for Strategic and International Studies that examines all the leadership dynamics within the Russian military—basically, who’s got Russian President Vladimir Putin’s ear and who doesn’t.

August 3: The Senate Armed Services Committee holds a nomination hearing for Lt. Gen. Laura Richardson to be the next commander of U.S. Southern Command.

August 4: One year anniversary of the Beirut explosion.

“​​I’ll never politicize the work you do. You have my word on that.”

—U.S. President Joe Biden taking a not-so-subtle dig at former U.S. President Donald Trump during publicized remarks to members of the intelligence community at the Office of the Director of National Intelligence on Tuesday

Ever Given docks at last. We know it’s been a busy year, but surely SitRep readers will remember that container ship that got wedged in the Suez Canal back in March. The Ever Given has finally docked in the Dutch port of Rotterdam after being released by Egyptian authorities on July 7.

NEW FOR SUBSCRIBERS: Want to read more on this topic or region? Click + to receive email alerts when new stories are published on Military, Security, Middle East and North Africa