Shared concern about China is the core driver of the U.S.-India partnership, but in recent months, other priorities have intervened. When Indian External Affairs Minister S. Jaishankar visited Washington in May, COVID-19 cooperation was the main focus. Now, it’s Afghanistan.

This week, U.S. Secretary of State Antony Blinken traveled to India, where his meetings covered a variety of topics: U.S. Indo-Pacific policy, the Quadrilateral Security Dialogue—known as the Quad, the pandemic, and climate change. Blinken also addressed civil society leaders with a focus on India’s democratic backsliding—an indication the Biden administration isn’t afraid to engage on issues New Delhi would prefer it avoid.

But Afghanistan undoubtedly loomed large over the visit, given the central focus the U.S. withdrawal occupies in the Biden administration’s South Asia policy and India’s growing involvement in Afghanistan-focused regional diplomacy. It figured prominently in Blinken’s meetings and in his public comments during the trip.

U.S. and Indian interests align on many levels, but they differ on Afghanistan. Biden’s decision to fully withdraw will ultimately strengthen the Taliban, which have attacked Indian interests and nationals. The fragile U.S.-sponsored intra-Afghan dialogue also intends to produce a political settlement that gives the Taliban a share of the power. That outcome would advantage Pakistan, the Taliban’s ally and India’s rival. (Afghanistan hasn’t had a pro-Pakistan government since U.S. forces overthrew the Taliban regime in 2001.)

India has invested heavily in Afghanistan, including granting $3 billion in development assistance since 2001, and has enjoyed close ties with all post-Taliban governments. But India now worries Pakistan and China, its two main rivals, will fill the vacuum left by the United States and deepen their influence. This week, Beijing hosted a visiting Taliban delegation.

India has shifted its policy in recent weeks. In June, New Delhi sought to open formal communication channels with the Taliban for the first time, becoming the last major regional player to do so. It has also widened its engagement with the Afghan political class. India wants to gain more influence by expanding its links beyond those in government. This week, ThePrint reported New Delhi is “engaging with ‘all stakeholders’ to the Afghan situation, which includes the Taliban.”

As C. Raja Mohan wrote in Foreign Policy this week, India is also increasing its participation in Afghanistan-focused regional diplomacy, most recently through its involvement in conferences in Central Asia. This is welcome news for the United States: Most of Afghanistan’s neighbors are either U.S. rivals, such as China, Iran, and Russia, or difficult partners, such as Pakistan and Turkey. The Biden administration wants its friends to play more of a role in shaping a so far elusive regional consensus on the way forward for Afghanistan.

This isn’t to diminish the importance of other issues discussed during Blinken’s visit to New Delhi. With India fearing another COVID-19 surge, U.S. pandemic assistance remains critical; Blinken announced an additional $25 million in aid. China-focused cooperation is also still essential. India and the United States each faced recent cyberattacks blamed on China. Both countries are keen to maintain momentum with the Quad; Washington may host a meeting of leaders in September.

Nevertheless, the stars are aligned for more U.S.-India cooperation on Afghanistan. The United States is pushing for more regional engagement at a moment when India—one of Afghanistan’s only neighbors with cordial ties with Washington—is stepping up its game.

Read all of Foreign Policy’s coverage of the U.S. withdrawal from Afghanistan here.

Deadly floods in India. Monsoon season can often wreak havoc in India, and this week has seen heavy rains, floods, and landslides that killed dozens of people and displaced thousands of people. Earlier this week, nearly 2 feet of rain fell within 24 hours in western coastal areas. The worst damage is in the state of Maharashtra, where nearly 200 people died and about 200,000 people were evacuated.

A horrific crime in Pakistan. On July 20, a 27-year-old woman named Noor Mukadam was killed in an affluent neighborhood in Islamabad. Zahir Zakir Jaffer, who had worked as a therapist, has confessed to committing the crime in his home. His parents and two domestic workers were arrested for allegedly hiding evidence. The grisly crime dominated headlines in Pakistan this week.

The sheer brutality of Mukadam’s murder stands out. She was reportedly tortured before being beheaded. According to local reports, she tried to escape by jumping off a balcony, only to be caught by Jaffer and dragged back inside. The crime has sparked emotional debates about domestic violence in Pakistan and prompted fears Jaffer’s elite status as the son of a prominent businessperson could enable him to evade justice.

On Monday, Jaffer, a dual U.S.-Pakistan national, met with U.S. Embassy officials at an Islamabad police station. On Tuesday, the embassy indicated in a tweet that such meetings are common protocol for U.S. citizens arrested abroad.

Elections in Pakistani-administered Kashmir. On Sunday, Pakistan’s ruling Tehreek-e-Insaf (PTI) party won the first elections held anywhere in Kashmir since India revoked the autonomy of the Indian-administered part of the region in August 2019. The Pakistani-administered region’s top election commissioner announced the PTI won 25 of the 45 legislative seats.

The victory delivers another boost to the PTI, which has weathered recent challenges, from economic stress to a short-lived opposition alliance. But it was an expected result: The ruling party in Islamabad often wins elections in Pakistani-administered Kashmir. The PTI did face a tough fight. Opposition parties warned Pakistani Prime Minister Imran Khan will try to turn Pakistani-administered Kashmir into a formal province—a charge Khan has denied. 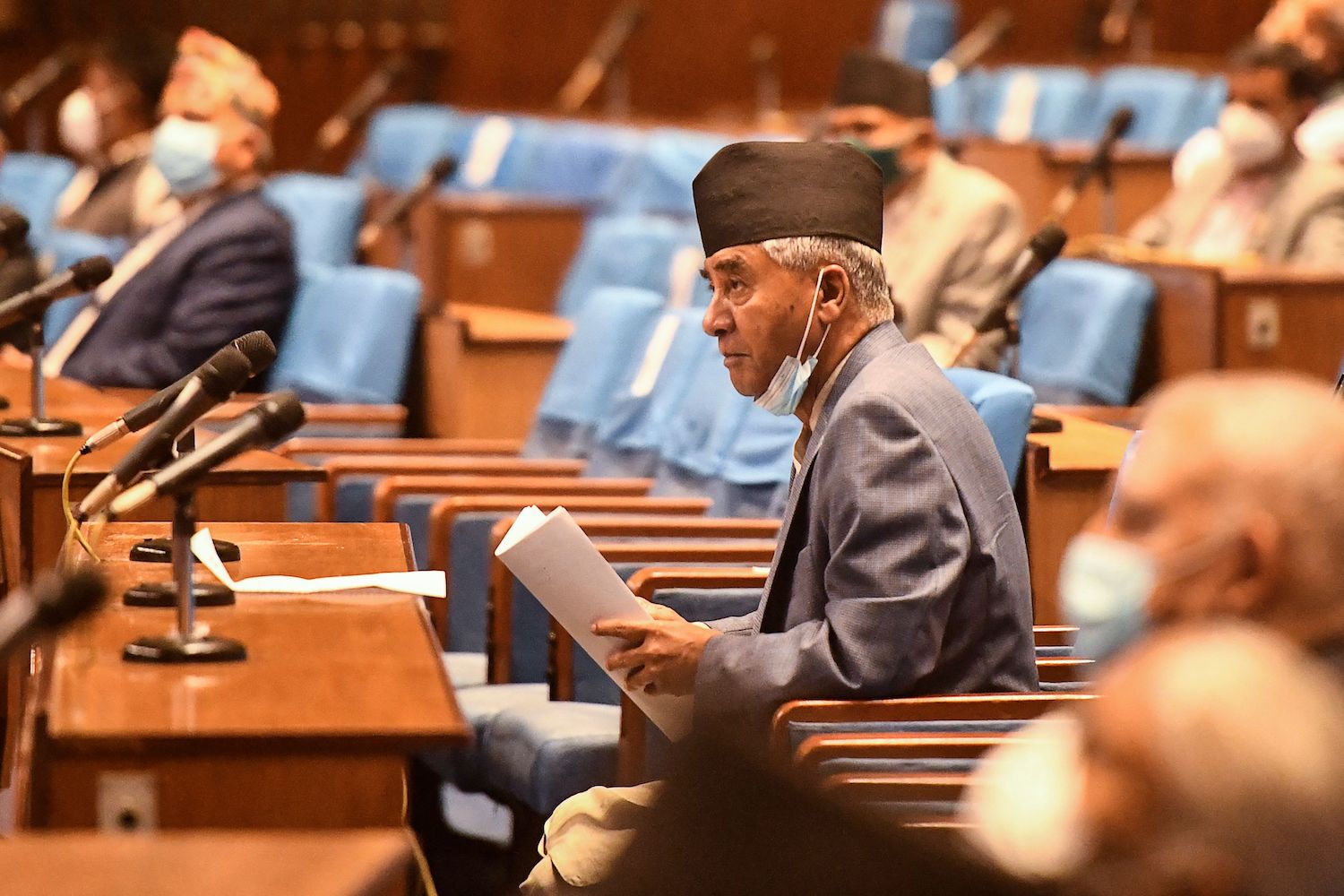 Blinken’s visit to India has captured attention this week on the U.S. diplomacy front this week. But just before leaving, the U.S. secretary of state called Nepal’s new prime minister, Sher Bahadur Deuba. Blinken tweeted the two spoke about pandemic cooperation and climate change. According to a press release from Nepal’s foreign ministry, their conversation also covered “various areas of Nepal’s development priorities.”

The conversation marks the second time in less than two months that a senior U.S. official spoke with a senior leader of one of South Asia’s smaller states. In June, Undersecretary of Defense for Policy Colin Kahl spoke with Maldives Foreign Minister Abdulla Shahid.

Blinken’s call with Deuba similarly appears to be an effort to strengthen engagement with a country caught up in the widening India-China rivalry. Long in India’s orbit, Nepal has seen growing Chinese investment in recent years, although Deuba is perceived to be more pro-India than his predecessor. Blinken’s call likely signals Washington’s intention to push countries currently balancing relations with India and China away from Beijing.

“It would not be an exaggeration to describe Pakistan as no country for women.”

—An editorial in the Pakistani newspaper Dawn, reacting to the killing of Noor Mukadam in Islamabad

Tanushree Thapa, an environment specialist in Kathmandu, and Simone Rawal, a graduate student at the University of British Columbia, argue in South Asian Voices that Nepal’s political instability constrains efforts to address myriad threats, from the coronavirus pandemic to wildfires and floods. “Nepal requires a government to showcase strong leadership by putting Nepalese people before politics more than ever,” they write.

In the Daily Mirror, Sri Lankan writers Lasantha Mendis and Shanthi Wijesinghe report on the mental trauma and other abuses experienced by some Sri Lankan student athletes. “Parents have become helpless owing to the lack of any recourse to save their children, as they cannot find any via the school authorities,” they write.

Amrita Dutta writes in the Indian Express about the challenges of writing obituaries during a pandemic: “Journalistic detachment, or the pleasure of a good copy, is harder when you are as much a part of an unfolding tragedy as those you write on.”

NEW FOR SUBSCRIBERS: Want to read more on this topic or region? Click + to receive email alerts when new stories are published on Foreign & Public Diplomacy, India, South Asia, Afghanistan

The World Has No Answer for Migration

‘No Decisions, No Changes’: Pentagon Fails to Stick Asia Pivot

Community Policing Is Not One Size Fits All

The World Has No Answer for Migration

‘No Decisions, No Changes’: Pentagon Fails to Stick Asia Pivot