“Republic of False Truths” defers any happy ending to the Arab Spring.

By Kevin Blankinship, a professor of Arabic at Brigham Young University.
August 1, 2021, 6:00 AM

Istibdad. That’s the Arabic word I remember from the time I met Alaa al-Aswany, the Egyptian dentist and bestselling author of The Yacoubian Building. It means “absolutism” or “dictatorship,” from a root signifying “to keep for oneself”—a fitting term for an author who has made a career of fighting totalitarianism. I was studying Arabic at the American University in Cairo, and Aswany was lecturing about politics—and berating the persistence of istibdad.

It was a dizzying time. Factory protests and bread riots flared up every week. I watched as one Egyptian friend of mine, a photographer for Reuters, had his camera snatched by the authorities. “They would have destroyed it,” he said, but for the fact that he spoke German and convinced them he wasn’t Egyptian. Anyone in Cairo at the time could have told you something vast and explosive was building. No one knew it would erupt just 18 months later in the 2011 uprisings, known in Egypt as the January 25 Revolution. 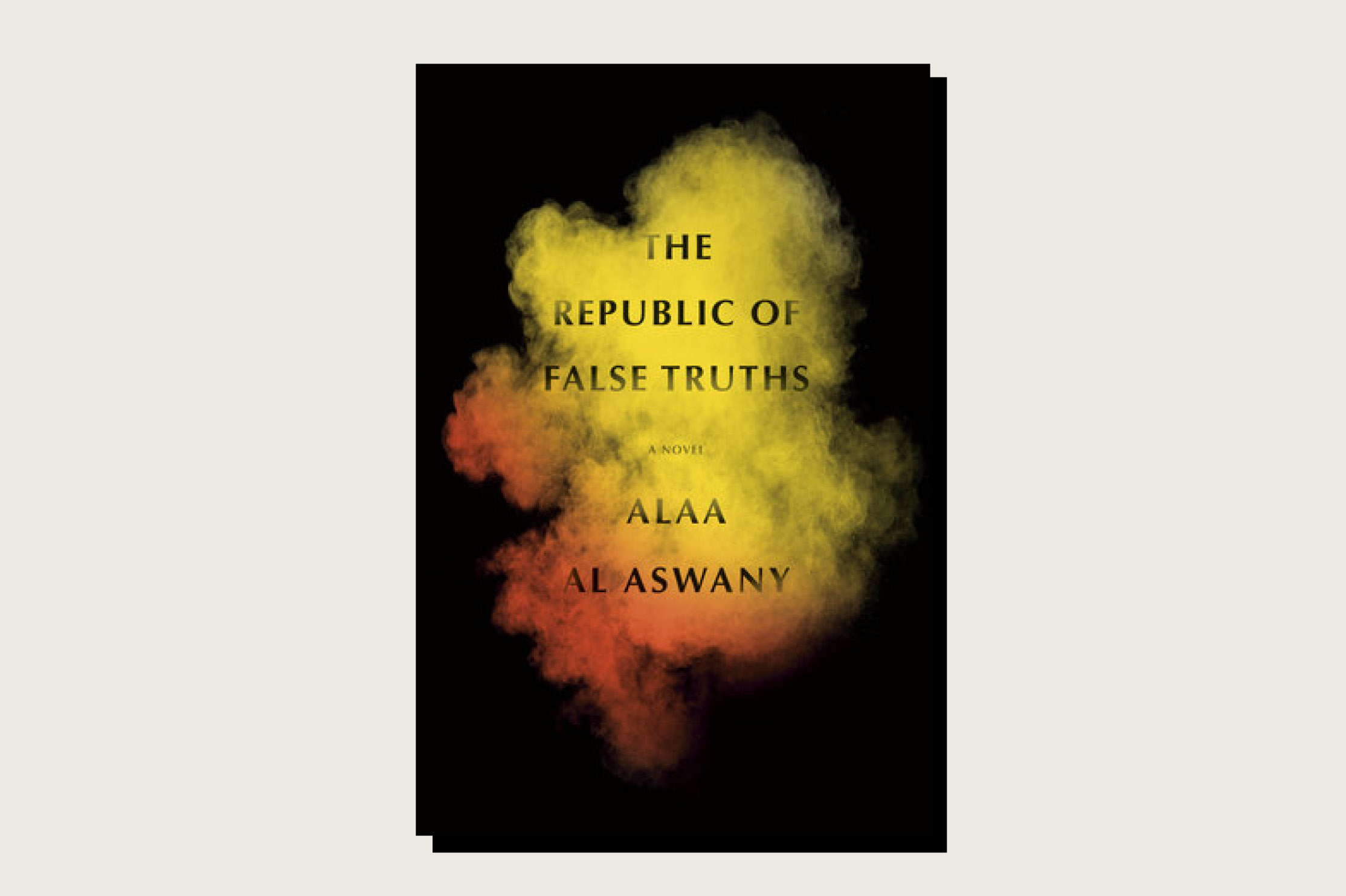 Istibdad. That’s the Arabic word I remember from the time I met Alaa al-Aswany, the Egyptian dentist and bestselling author of The Yacoubian Building. It means “absolutism” or “dictatorship,” from a root signifying “to keep for oneself”—a fitting term for an author who has made a career of fighting totalitarianism. I was studying Arabic at the American University in Cairo, and Aswany was lecturing about politics—and berating the persistence of istibdad.

It was a dizzying time. Factory protests and bread riots flared up every week. I watched as one Egyptian friend of mine, a photographer for Reuters, had his camera snatched by the authorities. “They would have destroyed it,” he said, but for the fact that he spoke German and convinced them he wasn’t Egyptian. Anyone in Cairo at the time could have told you something vast and explosive was building. No one knew it would erupt just 18 months later in the 2011 uprisings, known in Egypt as the January 25 Revolution.

The events that toppled Hosni Mubarak’s 30-year military regime gave hope to millions of Egyptians, including Aswany, who founded the grassroots Kefaya movement and went to Tahrir Square almost every day of the 2011 demonstrations. But the so-called Arab Spring bore not political freedom but instead more oppression and poverty. Buyer’s remorse rapidly set in, especially after the effective return of Egypt’s military rulers.

These anxieties haunt the pages of Aswany’s latest novel, The Republic of False Truths, published in 2018 in Lebanon and out this August in English translation. A 10-year look back at the events leading up to and immediately following Mubarak’s ouster, the book has been banned throughout most of the region; Aswany fled his home country and now faces a lawsuit from the Egyptian government for “insulting the president, the Armed Forces, and judicial institutions.”

The novel follows the parallel lives of Cairo residents that cross at the nexus of revolution. Some of them support the uprisings, while others oppose them, but all feel the state’s iron hooks carving up the movement. Their anxieties about rebellion’s fruits reflect Aswany’s own. Any sense of optimism, though present, runs in short supply.

Following 18 days of marches, strikes, and civil disobedience, on Feb. 11, 2011, career Air Force marshal Mubarak gave up control of Egypt and stood trial for corruption, abuse of power, and failure to stop the killing of peaceful protesters. He was condemned to life in prison, and the following year Egyptians elected the Islamist Mohamed Morsi as president. Morsi’s backers in the Muslim Brotherhood won a majority in parliament, giving Egypt’s Islamists more power than ever. Morsi went on to grant himself power to legislate without judicial review and rammed through a hastily written constitution.

Because of such grabby moves, protests calling for Morsi’s resignation broke out in summer 2013. A military coup led by Defense Minister Abdel Fattah al-Sisi removed him and stifled his supporters to the tune of around a thousand deaths during the August 2013 Rabaa massacre. The next year’s elections saw Sisi become president—with 97 percent of the vote. Since then he has steadily gathered power for himself, launching economic megaprojects even as the standard of living falls, banning public expressions of opposition, jailing activists, and waging war in Sinai. After Sisi’s second landslide victory in 2018, the now-released Mubarak said, referring to the events of 2011, “Be warned, what happened seven or eight years ago will not be repeated.”

That’s the bleak background of The Republic of False Truths. The Arabic title, Jumhuriya Kaan, could be directly translated as “A So-Called Republic” or, with a nod to 1990s American slang, “A Republic—As If!” It recalls Ben Franklin’s famous quip when asked, upon exiting the Constitutional Convention, what kind of government the American colonists now had: “A republic, if you can keep it.” That uneasy refrain hangs over Aswany’s characters, all of whom, whether pro or contra the revolution, are fighting to keep Mother Egypt. Opposed to the uprisings are Gen. Ahmad Alwany, who runs the formidably titled “Apparatus” (al-Jihaz) and supervises the torture of dissidents; Nourhan, a pious yet alluring TV presenter who uses her charms to prop up the regime; Sheikh Shamel, a Saudi-trained cleric who rails against the protests as un-Islamic; and Essam Shaalan, a factory manager who quashes labor strikes.

In Aswany’s narrative, those on the other side are intimately tied to the revolution’s foes. Alwany’s daughter, Danya, resists the uprisings but changes her mind after meeting Khaled Madany, the son of Shaalan’s chauffeur. Mazen, a worker in Shaalan’s factory, leads the labor strikes and falls in love with Asmaa, a protester who exposes the regime’s torture of women. Ashraf Wissa, a wealthy, hashish-smoking playboy from Egypt’s Coptic Christian minority, gets dragged into the seething protests near his building. Each storyline unfolds in alternating chapters, a hallmark of Aswany’s multivocal style that conveys the tangled web of lives. And yet in another sense, his characters don’t read like actual, idiosyncratic, individual men and women.

The American screenwriter Aaron Sorkin once described his creative process for smash hits like The West Wing and The Social Network: Searching for “intention and obstacle,” he composes a scene by playing all the characters himself, arguing out loud from one side of a debate and then switching to the other side. “The fun of it for me is going back and watching this tennis match,” he said. “It’s not that I’m interested in the subject of the debate or declaring a winner at the end.” The resulting repartee in his work has drawn as much criticism as praise—every film or episode sounds at last like what it really is: Aaron Sorkin arguing with himself. But one man’s self-involvement is another man’s wisdom. Social Network director David Fincher loves the Sorkin brand precisely because “you’re watching a person navigate the jungle of their self-doubt, the jungle of their thought process.”

Reading anything by Alaa al-Aswany, including The Republic of False Truths, is a lot like watching a Sorkin show. Narrative energy flows mainly from debates between characters—or, in other words, from Aswany’s debates with himself. Will revolution benefit the country? Does torture violate human ethics? What sexual practices does Islam permit? What is a woman’s role in society? And, perhaps most frustrating to those involved in the region: Are Middle Eastern publics ready for democracy?

“Egyptian culture, which we inherited from the pharaohs, is the culture of obedience to the pharaohs,” says factory manager Shaalan, reflecting his own lost idealism after being tortured in prison. “But dictatorships,” retorts labor activist Mazen, “have arisen in Spain, Germany, Italy, Portugal, and Argentina, and none of those countries are Islamic or pharaonic. Your view is unjust.” Mazen’s plucky answer reflects Aswany’s own view expressed in a New York Times op-ed, “Is Egypt Doomed to Autocracy?,” one of several he wrote as a contributing writer from 2013 to 2014. However, if taken as an unconscious apology for dictatorship—since, as European history shows, tyranny is a universal pastime—then Mazen’s rejoinder might explain what for some has been Aswany’s most disappointing legacy: a full-throated cheer for the 2013 military coup that dislodged Morsi and replaced him with Sisi.

“There was a warning, and Morsi refused to step down,” Aswany told Negar Azimi in late 2013, in an interview for the New Yorker. “The Army interfered to protect millions who were already in the street. This is not a coup d’état.” (Morsi died in 2019 while undergoing a questionable criminal trial.) Most of Egypt’s liberal elites share such enthusiasm for the military state, out of a gripping paranoia about political Islam and its adherents like Morsi. The late novelist Gamal al-Ghitani—whose semester in residence during my own student days at the University of Chicago provoked a sharp op-ed by faculty member Ahmed El Shamsy—had similar convictions. They betray the military statist footing of Egyptian liberalism, which builds such a bogeyman out of religion that the sins of secularism fade to black.

But at a more basic level, Aswany’s hostility to Mubarak’s autocracy and support for Sisi’s gives away a searing inner conflict, of which The Republic of False Truths is a lively record. Aswany pulls no punches when criticizing the army, but he prefers the devil he knows over the one he doesn’t. Many in the Middle East like him think there are no great choices; it’s plausible, though disturbing, if they yield to cynicism. As for the novel, readers watch in horror as the Apparatus eats all the characters, making them choose between torture, complicity, or exile. The story ends on a hint of retribution, but one that, like the aftermath of the Arab Spring itself, merely repeats the cycle of blood instead of escaping it. Any happy ending, while still possible, has been deferred.

Kevin Blankinship is a professor of Arabic at Brigham Young University.

A decade after Arabs started a regional revolution, it’s the neighboring continent that will never be the same.