A call for greater oversight of the gaming industry has undercut technology firms already facing threats of a wider crackdown.

The highlights this week: A call for regulation of video games causes stocks to fall, China responds to the delta variant with a full-court press, and why boy band star Kris Wu’s arrest could presage others.

The highlights this week: A call for regulation of video games causes stocks to fall, China responds to the delta variant with a full-court press, and why boy band star Kris Wu’s arrest could presage others.

Are Video Games in Regulators’ Crosshairs?

A single article in a Chinese state media outlet caused internet giant Tencent’s stock price to fall by more than 10 percent on Tuesday. The piece in Economic Information Daily, a newspaper owned by state agency Xinhua, called for greater regulation of video games, which it described as “spiritual opium”—a politically potent term that echoes past ideological denunciations.

In a market left jittery by the ongoing regulatory war on private enterprises, especially technology firms, the article prompted fears that the government would target video games next. Tencent has a significant gaming component to its business. The Economic Information Daily removed and then republished the piece with the “spiritual opium” line removed, leading Tencent’s stock price to recover slightly.

China’s tech stocks have seen a massive sell-off in recent months, most recently fueled by the crackdown on the education technology sector. The government is moving to reduce the scope of tech giants, spurred by the relative outspokenness of figures such as Alibaba’s Jack Ma, by concerns about data and privacy, and simply because the Chinese Communist Party distrusts any powerful group it doesn’t control.

The Economic Information Daily article would be a relatively minor political signal in more stable times—but it caused big ripples in an unsettled market. And even if the signal was unintentional, video games remain a particularly vulnerable sector. The industry has taken off in China, now the biggest video game market in the world. Around three-quarters of the market is mobile gaming, and Tencent takes in 43 percent of all video gaming revenue inside China.

Tencent is a significant owner in the global gaming industry, and even non-Chinese firms have been accused of politically pandering to the Chinese market. In recent years, Chinese video games had started to become one of the country’s few successful cultural exports: A range of creative games, such as the hit Genshin Impact, were picking up plenty of overseas players.

Yet inside China, video games are also routinely portrayed as bad for children’s health. The market—like all others—is heavily censored, but the main concern is gaming addiction among teenagers. Summer camps to supposedly break this addiction have proliferated, with reports of abusive treatment. Video games have also been blamed for the country’s imagined masculinity crisis, alongside K-pop and Japanese cartoons.

Video game firms have responded by introducing age limits and even facial recognition. A 2019 law banned minors from playing games for more than 90 minutes a day or after certain times at night.

There is a decent chance, given the current political mood, that the video game industry will be dealt a significant blow. New private education restrictions indicate the government is willing to sacrifice private enterprise for the health and ideological control of children. But the extent of the education sector’s fall may delay or weaken video game restrictions. The foreign reaction seems to have spooked the Chinese authorities.

Delta fears rise in China. The spread of the delta variant of the coronavirus has caused much of China to reimpose travel restrictions and some limited lockdowns. Exit and entry from China have been shut down once again, except for urgent cases. An outbreak that began near Nanjing has caused the number of confirmed cases to rise to 1,167—a significant number in China, which prides itself on being coronavirus-free.

Protecting Beijing and the leadership is a priority, especially given the upcoming party conclave. The government has stopped travel to and from the capital from areas with outbreaks and introduced some restrictions on nightlife and the subway. Delta is a disaster for the domestic travel industry, now flatlining after a revival in the first half of the year. Domestic travel normally peaks during Golden Week, the full week of holiday in October, but it is now likely to see tourism essentially shut down.

But the full-court press also raises questions about China’s long-term strategy in a world where the coronavirus is a chronic—if controlled—problem. The cost of preserving zero COVID-19 through lockdowns and border closures may start to outweigh the benefits. Sixty-one percent of China’s population is vaccinated, but given the relatively weak efficacy of the current Chinese vaccines, don’t be surprised if China develops and mandates a mRNA vaccine of its own.

Xi’s vacation plans. Details around the usual political leadership retreat in Beidaihe, a beach resort near Beijing, are even scanter than usual. The August meeting is usually a hotbed of face-to-face politicking, and it sets the agendas for the upcoming annual party conclave. Chinese media didn’t report at all on last year’s meeting, and it’s possible that delta spread may have caused travel concerns this year—or that President Xi Jinping is keeping things to a tighter inner circle.

With the party congress due next year, key leadership changes would usually be arranged at these meetings. Since Xi has shattered the norm—post-Deng Xiaoping—of 10-year terms at the top, it’s anybody’s guess as to whether the usual cycle of replacement holds. And with Chinese borders closed and the risk of talking to outsiders greater than ever, predictions are qualified guesswork at best. 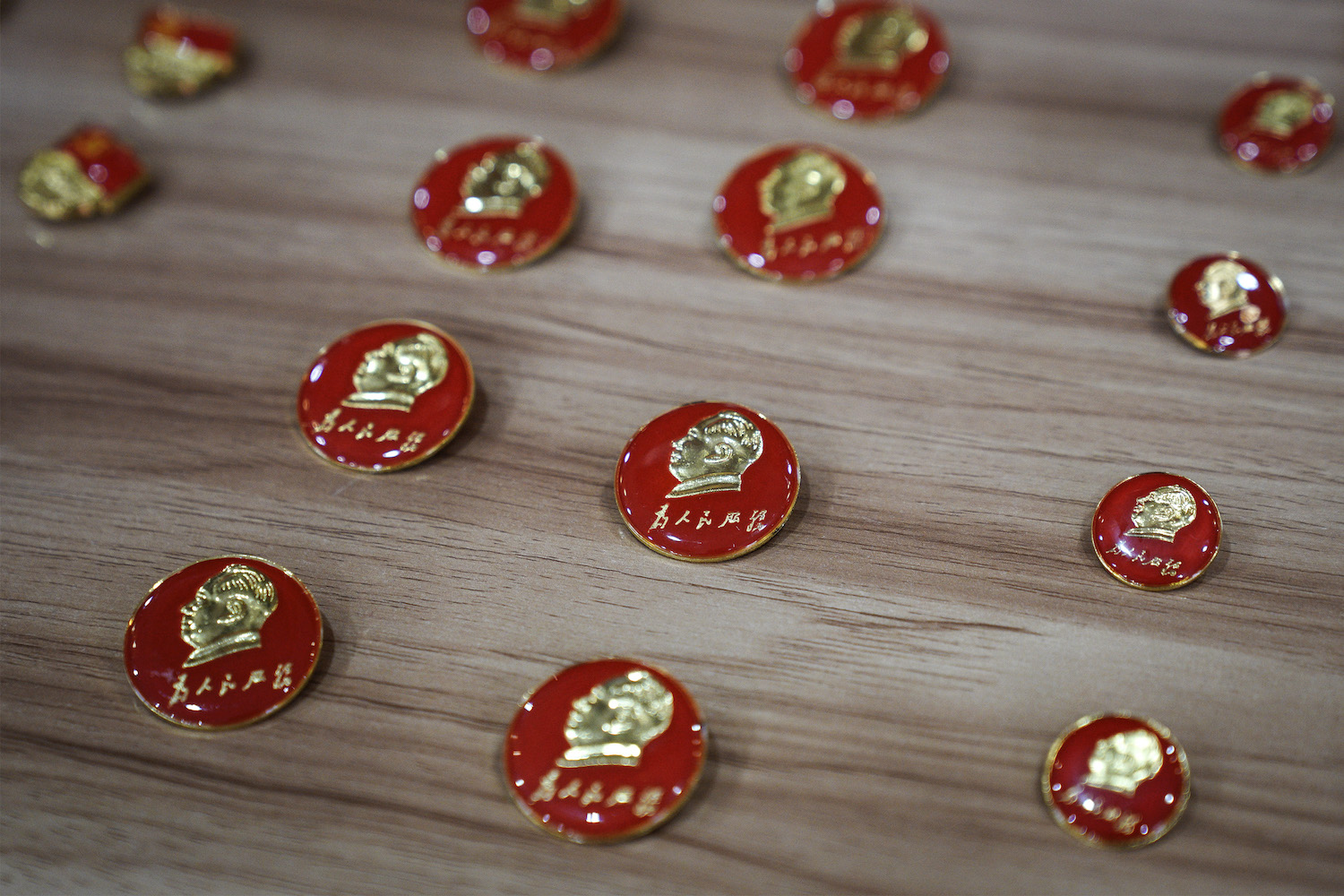 Mao Zedong badges are seen in the souvenir shop of his former residence on Oct. 7, 2020, in Wuhan, China.Getty Images

Mao badges appear in Tokyo. A minor contretemps erupted on Monday after two Chinese sprinters wore Mao Zedong badges, once a mandatory form of allegiance, when they received gold medals at the Olympic Games in Tokyo. It’s not clear what the athletes wanted to express with the badges, except perhaps a hope of appealing to a resurgent and nostalgic nationalism. Most people in China wore the badges in the early years of the Cultural Revolution, but many were collected and melted down after Mao’s death.

The International Olympic Committee (IOC) forbids political displays by winners, but it is unlikely to act against China given the sensitivity around the Beijing Winter Olympics next year. (The IOC also has a history of overlooking Chinese violations.) Although Xi has cracked down on criticism of the Cultural Revolution and revived aspects of Maoist thinking, personality cult images are still risky.

Kris Wu arrested. The long, strange career of Chinese Canadian boy band star Kris Wu came to a halt on Saturday night when he was arrested in Beijing on rape charges. Wu recently faced online accusations of abusing underage fans and former girlfriends. After Beijing police accused his accusers of attempting to extort money from him last week, it seemed like Wu had weathered the storm—as many other powerful Chinese men accused of abuse have.

Wu’s arrest could presage a wider crackdown on the entertainment industry. Wu is Chinese-born, but his status as a Canadian citizen was highlighted by both his state media and his accuser. That is likely to become a tricky point for other stars who hold foreign passports.

Nuclear reactor shutdown. The Taishan nuclear reactor in southern China has been shut down for maintenance, following whistleblowing in June by the French company that constructed it, Framatome. China claimed the initial reports were inaccurate, but Framatome’s tactic of raising concerns with the United States after being ignored by Chinese regulators now seems successful—even if that isn’t publicly acknowledged.

Chinese nuclear construction slowed after the Fukushima disaster in Japan in 2011, and the government conducted safety checks on all reactors. China still hopes to quadruple its current nuclear power capacity of 49.6 gigawatts by 2035.

“Buy Chinese.” In another decoupling push, China has set new targets of 100 percent domestic procurement for a range of state-owned companies. The most critical sector included is medical and testing equipment, once a rapidly growing market in China for foreign firms and one still largely controlled by the state. Beijing has recently opened new possibilities for foreign ownership in the private health care sector, but U.S. firms are still likely to face obstacles, especially as biodata becomes a more sensitive issue.

New Oriental, a giant education firm that employs roughly 70,000 teachers and administrators nationwide, was once held up as a sterling example of Chinese success in a globalized era. The film American Dreams in China depicted a fictionalized account of the company’s rise from humble beginnings in 1993, holding up its founders as examples of entrepreneurial spirit its listing on the New York Stock Exchange as a triumphant moment in China’s reemergence.

As of last week, Chinese government regulation has shattered New Oriental’s business model, leaving its stock price at a low of just over $2—a fall of 90 percent from February.

New Oriental’s initial business focused on the English proficiency tests required for university study abroad. But was very much a school for the urban upper-middle class—not the elite, who preferred smaller, one-on-one classes. Over time, it broadened out into K-12 training, which became its main source of revenue, online education, foreign trips, and bookshops.

The crackdown on private education has left New Oriental and other firms reeling. All private education firms for children are supposed to rebrand as nonprofits. The solution for New Oriental may be a pivot back to its adult education programs. But if the number of students traveling abroad decreases significantly, even that lifeline may be snipped.

Given its resources, the company’s stock price may be undervalued—but if it can’t adjust, the true price may be zero.

You are commenting as . Change your username | Log out
Tags: China, Science and Technology

NEW FOR SUBSCRIBERS: Want to read more on this topic or region? Click + to receive email alerts when new stories are published on Science and Technology, China

The Quad Comes to Washington

The Quad Comes to Washington