Insurgents are advancing into some of Afghanistan’s largest cities, signaling a new phase of the war.

The highlights this week: The Taliban storms Afghan cities and threatens civilians, a draft law would give Pakistan a new province, and Sri Lanka finds itself in an overlooked economic crisis.

The highlights this week: The Taliban storms Afghan cities and threatens civilians, a draft law would give Pakistan a new province, and Sri Lanka finds itself in an overlooked economic crisis.

The Fight for Afghanistan’s Cities

As U.S. forces exit Afghanistan, the Taliban are entering its cities. In the last week, insurgents have attacked the provincial capitals of Lashkar Gah, Kandahar (Afghanistan’s second largest city), and Herat (its fourth largest). These offensives mark a dramatic escalation—until now, the Taliban were mobilizing around cities but not entering them—and signal a dangerous new phase of the war.

Civilians face the most immediate risk. According to the United Nations, civilian casualties broke new records in the first half of 2021. With Afghan forces and the Taliban fighting in densely populated areas, this toll will rise.

In Lashkar Gah, the capital of Helmand province, the Taliban have reportedly taken over civilian homes and shot people in the street. But it’s not just the Taliban endangering civilians. Last Saturday, the Afghan Air Force bombed a private hospital in Lashkar Gah due to inaccurate intelligence about the location of insurgents. On Aug. 3, the United Nations reported 40 civilian deaths in the city during a 24-hour period.

The Taliban’s breaching of cities could end a long-standing stalemate. For years, the insurgents have enjoyed clout and control in rural areas, but the Afghan government has maintained control of its cities. The only exceptions were in 2015, when the Taliban briefly seized the northern city of Kunduz, and in 2018, when it nearly took the provincial capital of Farah in western Afghanistan.

The urban offensives also have demographic implications. If the Taliban seize cities, the insurgents would bring an even more sizable share of the population under their control. Given high levels of displacement, it’s difficult to estimate the number of Afghans living under Taliban control—but an overwhelming majority of Afghans live in rural areas, where the Taliban already hold sway.

For years, U.S. airpower played an essential role in helping Afghan soldiers repel Taliban forces from urban areas. This critical support will soon be lost. The Afghan Air Force has strengthened significantly in the last 20 years; it is the only branch of the Afghan military with a capacity advantage over the Taliban. But it’s under strain, and its capacities will diminish without U.S. training and advice.

There are two hopes for holding back the Taliban from taking Afghan cities. First, Washington will keep funding the Afghan military, including its air force. Additionally, in recent weeks there has been a resurgence of anti-Taliban militias capable of pushing back.

These militias have produced mixed results. The Taliban have made major inroads in Lashkar Gah, with residents reporting advances within meters of government facilities. On Monday, the group seized a state-run television station there. But in Herat, the Taliban face significant local resistance, including from militias raised by Ismail Khan, an ex-mujahedeen fighter and longtime warlord. Journalist Lynne O’Donnell interviewed him for Foreign Policy this week.

The fate of Afghanistan’s cities also depends on Taliban strategy. The group gained international legitimacy from the agreement it signed with the United States last year. To maintain that legitimacy, it may eventually pause its urban offensives, pressure the Afghan government to reenter negotiations, and leverage its strong bargaining position to force a settlement that gives it significant power. But if the Taliban conclude legitimacy isn’t all that important, they could intensify urban assaults and try to overthrow the government.

If there is a silver lining, it is the defiance of Afghan city residents against the Taliban. In Herat, people took to the streets on Monday and filled the air with cries of “Allahu akbar” (or “God is great”) to express their solidarity with anti-Taliban forces. Similar cries have echoed in Kabul and beyond. This defiance won’t drive the Taliban out of Afghan cities, but it does give a much-needed boost to exhausted Afghan forces facing what could be many more weeks of urban warfare.

Pakistan seeks a new province. Pakistan’s Ministry of Law and Justice has finalized draft legislation that would give provisional provincial status to the Gilgit-Baltistan region in the north, establishing a provincial assembly and representation in the national legislature. The region’s final status will be determined by U.N. resolutions. If passed, the law will deepen India-Pakistan tensions.

India views Gilgit-Baltistan as its territory—a claim it hasn’t pursued as vigorously as its claim to Pakistan-administered Kashmir, which borders Gilgit-Baltistan. But the current government in New Delhi has taken a muscular approach to disputed territory. It has previously warned Islamabad not to change Gilgit-Baltistan’s status and formally rejects the China-Pakistan Economic Corridor because it would pass through the region.

A new Indian naval base? On Tuesday, Al Jazeera revealed India is building a naval facility on Agaléga, a Mauritian island hundreds of miles off the southeastern coast of Africa. Citing satellite imagery, financial data, and on-the-ground evidence, the report finds an airstrip and two jetties are under construction, and the base will be used by the Indian Navy for patrols and surveillance.

Such a facility would have considerable geopolitical implications. The Chinese military has a base in Djibouti, about 2,500 miles north of Mauritius. Both are located in the western reaches of the Indian Ocean region, a key strategic battleground for India-China rivalry—and a region New Delhi wants Washington to pay more attention to.

South Asia at the Olympic Games. All eight South Asian countries are participating in the Olympic Games in Tokyo, although they haven’t distinguished themselves in the medal standings. (India, at 65th place, is currently the best performing country from the region.)

But South Asia has produced inspiring stories. The Indian men and women’s field hockey teams both reached the semifinals. Nigara Shaheen, who fled war in Afghanistan as a baby and grew up in Pakistan, made her Olympic debut at the judo event as a member of the refugee team. And a female athlete became the first person from Bhutan to make the Olympics in archery, Bhutan’s national sport. 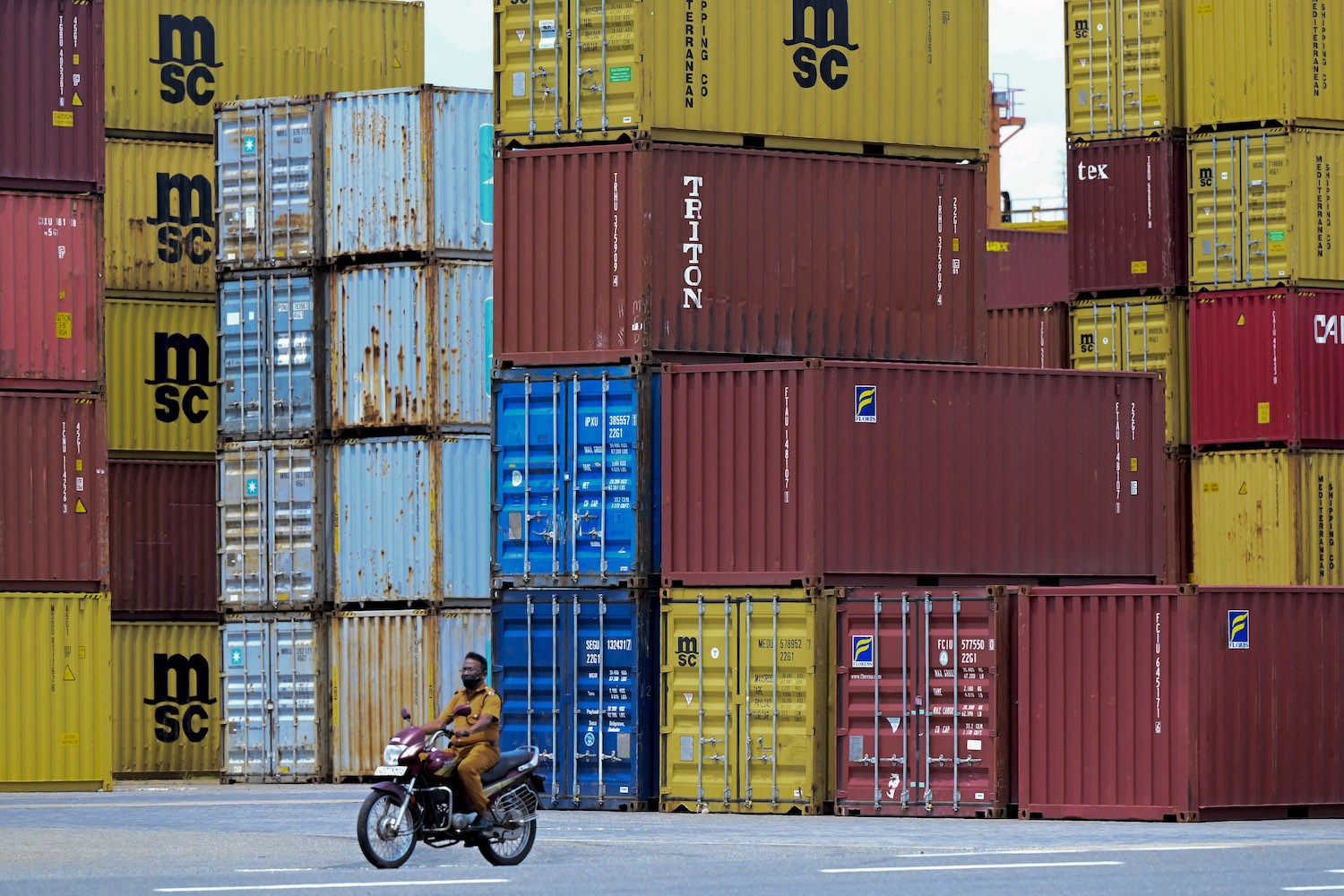 A motorcyclist rides past containers at the east terminal of the Colombo port in Colombo, Sri Lanka, on June 4.ISHARA S. KODIKARA/AFP via Getty Images

Sri Lanka is threatening to become South Asia’s economic weak link. It’s mired in a severe debt crisis, and its budget deficit exceeded 11 percent of GDP during the last fiscal year, which ended in March. The country’s foreign reserves can only pay for three months of imports, prompting Colombo to cut back on many foreign imports, including turmeric, a staple product. Fitch Ratings has warned default is a real possibility.

Sri Lanka’s woes stem in great part from a floundering tourism sector. Tourism typically accounts for at least 5 percent of GDP, and some estimates even put the figure at 12.5 percent. The sector’s troubles began before the coronavirus pandemic, when suicide bombers killed at least 290 people in churches and hotels in April 2019, keeping visitors away. But the pandemic still dealt a giant blow. A 2021 assessment found tourist arrivals between January and April fell nearly 100 percent from the same period in 2020.

This week, Sri Lankan economist Sirimevan Colombage urged Colombo to seek assistance from the International Monetary Fund to reduce its macroeconomic imbalances. The government has rejected this idea and insisted it has a better plan—but it hasn’t provided details.

“I felt a sense of hope, community, and belonging all at once.”

—Ahmadullah Azadani, a young Herat resident, sharing his reaction to the cries of “Allahu Akbar” that reverberated across the city on Monday night, in Al Jazeera

Indian pollster Rajesh Jain writes for ThePrint about a poll his company conducted on Indians’ views of the Pegasus spyware scandal. The fact that only 15 percent of those surveyed were aware of Pegasus is unsurprising, he says. “As we have seen repeatedly …, Delhi media lives in its own cocoon and quite often, issues raised in Delhi do not reach the masses,” he writes.

In the Dhaka Tribune, Bangladeshi economist Syed Akhtar Mahmood explains why poverty reduction rates have been higher in eastern Bangladesh than in the west. “The greater dependence on non-farm sources of income has allowed the eastern districts to achieve a higher rate of poverty reduction,” he writes.

Qudsia Naz, an official in Sargodha, Pakistan, discusses the recent establishment of a new botanical garden in the city in the News International. The project highlights how “there are a number of civil servants who are selflessly dedicated to serve the public” on issues of green governance—defying perceptions, she writes.

You are commenting as . Change your username | Log out
Tags: Afghanistan, Military, Security, South Asia

NEW FOR SUBSCRIBERS: Want to read more on this topic or region? Click + to receive email alerts when new stories are published on Military, Security, South Asia, Afghanistan