Wildfires in drought-stricken American West suck in military resources, in a sign of the new normal.

Call in the Big Guns

States across the American West have deployed hundreds of members of the National Guard and military hardware to help battle raging wildfires that are getting worse each year, part of an increasing trend of militaries being drawn into responding to natural disasters that are getting more frequent and more extreme each year.

A global problem. The United States isn’t alone. Russia deployed the military to contain wildfires scorching Siberia in July. As Lebanon grappled with wildfires that began to spread into Syria, it also brought in Air Force helicopters and Lebanese military units—to mixed results.

Turkey and Greece are also battling devastating wildfires amid an unprecedented heat wave that has seen the highest temperatures ever recorded in Europe. Meanwhile, over 1,000 German troops and 200 military vehicles were deployed to respond to unprecedented flooding last month.

Experts say the trends show how militaries will increasingly be forced into the business of disaster response to a level they haven’t seen before. (Even Reaper drones have been deployed to the wildfire fights in recent years.)

The National Guard response. So far, over 770 National Guard soldiers and airmen have been deployed to help battle the raging fires across eight states in the American West. There have been over 38,200 fires that have burned a total of 3.2 million acres across 14 states so far this year, according to data from the National Interagency Fire Center—leaving U.S. firefighting crews thinly stretched and states calling on military resources to back them up.

By the numbers. Also in the fight are four UH-60 Black Hawks, two CH-47 Chinooks, and one UH-72 Lakota helicopter, according to a National Guard spokesperson. But wildfire season isn’t projected to peak until mid-August, so more hardware is available to support them: 211 Black Hawks, 58 Chinooks, four C-130s equipped with airborne firefighting systems, and eight Reconnaissance Cargo RC-26 aircraft are available, the spokesperson said.

“We are continually evaluating and evolving our readiness,” Brig. Gen. Nick Ducich, vice director of operations for the National Guard, told SitRep by email. “Understanding the weather trends affecting wildfires, we’ve been preparing since March,” he said, including training and exercises “to meet the needs of states plagued by dry conditions.”

A “perfect storm.” Fueled by human activity and climate change, which has contributed to high temperatures and dryness, this year’s wildfires are some of the most intense to hit the West. “It’s kind of a perfect storm of human-created circumstances and conditions,” said Stephanie Pincetl, a professor at the University of California, Los Angeles, who noted that humans ignite over half of wildfires—and exacerbate their effects by burning fossil fuels and emitting greenhouse gases, among other actions.

“We’ve built in places we shouldn’t be building, we have done a century of fire suppression, and we’re causing the climate to change, so there’s nothing that you would call quote-unquote natural about the situation.”

Shock and aw-ful. Things are only projected to get worse, increasing the burden on the U.S. military and states’ national guards. “We used to talk about fire season,” Chief of the National Guard Bureau Daniel Hokanson told reporters last month, as Defense One’s Tara Copp reported. “It’s really a fire year now.”

U.S. President Joe Biden has announced Mark Brzezinski as his nominee to be ambassador to Poland. Brzezinski, son of late former National Security Advisor Zbigniew Brzezinski, served as ambassador to Sweden and as a White House Arctic envoy under the Obama administration.

Other nominees the White House announced this week: David Honey to be the Defense Department’s deputy undersecretary for research and engineering, Adriana Kugler to be U.S. executive director of the International Bank for Reconstruction and Development, Oren Whyche-Shaw to be U.S. director of the African Development Bank, Corey Hinderstein to be deputy administrator for defense nuclear nonproliferation at the Energy Department, and Rebecca Gonzales to head the State Department’s Office of Foreign Missions.

John Gans is leaving University of Pennsylvania’s Perry World House to be managing director of executive communications and strategic engagement at the Rockefeller Foundation.

Taiwan arms sales. The United States has approved the potential sale of howitzers to Taiwan, in a deal that could be worth $750 million. It’s the latest in a steady drumbeat of sales aimed at shoring up Taiwan’s defense. Last year, Washington signed off on a $600 million deal that included armed drones.

While Taiwan expressed its “sincere gratitude,” Beijing was, not surprisingly, irked. The foreign ministry urged Washington to “immediately revoke relevant arms sales to Taiwan, lest it should cause more damages to China-US relations and peace and stability across the Taiwan Strait.”

End of watch. Pentagon police officer George Gonzalez was killed in the line of duty this week after an attack at the transit station next to the Pentagon. Gonzalez, a Brooklyn native and U.S. Army veteran, joined the Pentagon Force Protection Agency in 2018. He was awarded the Army Commendation Medal for his previous service in Iraq. “A gregarious officer, he was well-liked and respected by his fellow officers,” the agency said in a statement. “Officer Gonzalez embodied our values of integrity and service to others.”

Let loose the dogs of bureaucracy. A sweeping new U.S. ban on the import of dogs from over 100 countries is leaving U.S. diplomats, military families, and aid officials who have pet pooches in the lurch, as we reported this week.

Officials posted at U.S. embassies and military bases abroad are scrambling to find ways to avoid being forced to leave behind their pet dogs due to the new restrictions—put in place due to a limited rabies outbreak in Pennsylvania that originated from a dog brought from Azerbaijan. Mark this up as yet another blow to morale in America’s diplomatic corps.

The geopolitics of gladhanding. U.S. engagement in Africa is increasingly framed (for better or worse) through the lens of great-power competition with China. Experts at the Center for Strategic and International Studies have released fascinating new research on what that entails on the security side of things: The think tank’s Judd Devermont, Marielle Harris, and Alison Albelda report U.S. officials engage with African security chiefs “far more than China does” with a breakdown of how top military and security officials in both Washington and Beijing interact with their counterparts in Africa.

But if China doesn’t have the edge in handshakes, it does in arms: “Between 2017 and 2020, China transferred almost three times as many arms to sub-Saharan Africa than the United States did (in terms of both quantity and quality),” as they write. 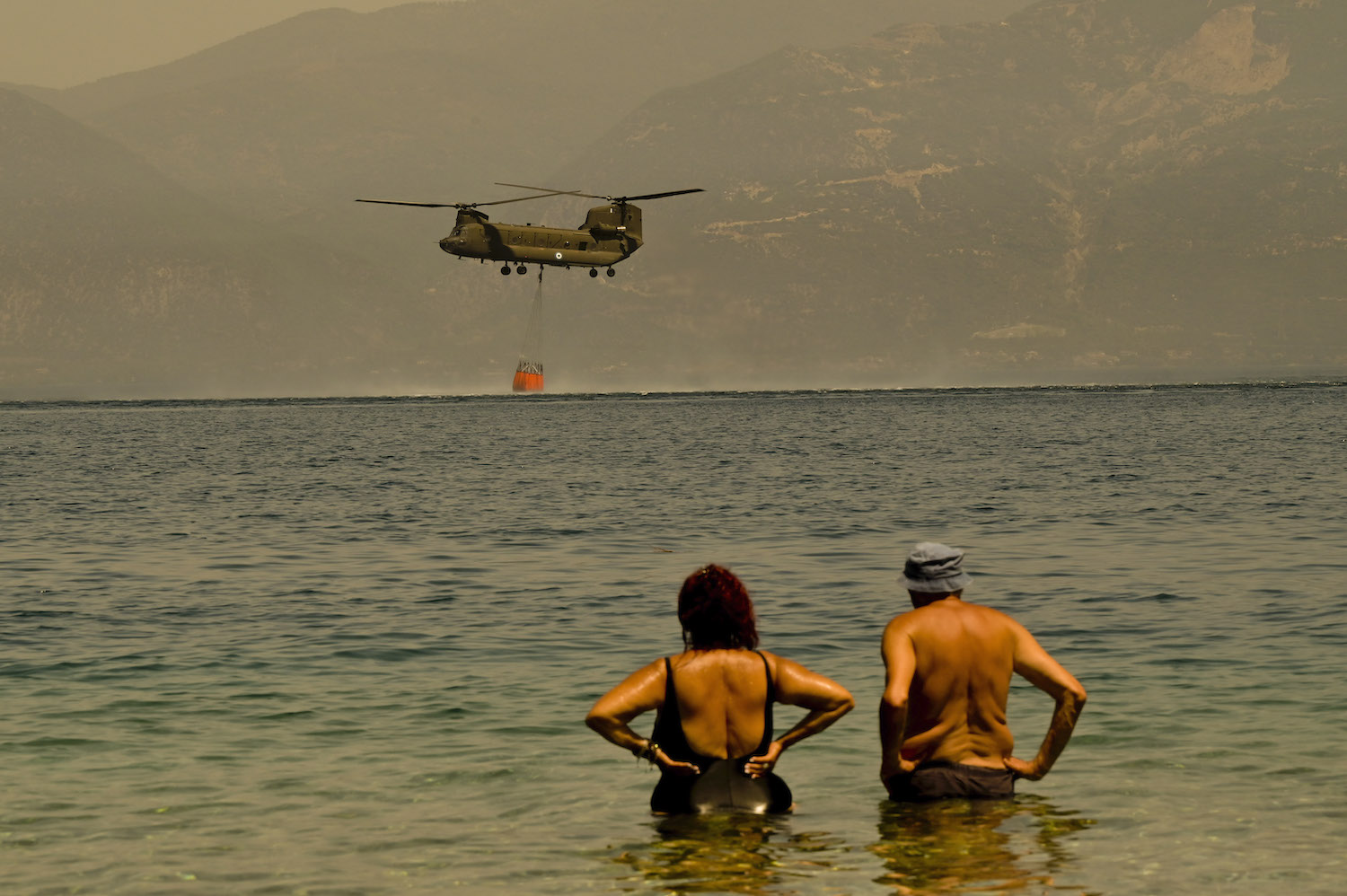 The week in weird news.

Speaking of whisky. If you’re thinking of jacking alcohol from your employer, try picking the cheap stuff. In a new post to the Federal Register, the State Department said it is investigating the disappearance of a missing $5,800 bottle of whisky that the government of Japan gave to former Secretary of State Mike Pompeo. Pompeo’s lawyer said he had no idea what became of the gift. (Maybe an unpaid and overworked State Department intern decided they earned some compensation on the side?)

You are commenting as . Change your username | Log out
Tags: Africa, China, Climate Change, United States

NEW FOR SUBSCRIBERS: Want to read more on this topic or region? Click + to receive email alerts when new stories are published on Climate Change, United States, China, Africa