A fake expert is the latest part of a state media push to blame the United States for the pandemic—at great diplomatic cost.

The highlights this week: Beijing’s COVID-19 conspiracy theories are undermining its diplomacy, Canadian businessperson Michael Spavor is sentenced to 11 years in prison, and China withdraws its ambassador to Lithuania.

The highlights this week: Beijing’s COVID-19 conspiracy theories are undermining its diplomacy, Canadian businessperson Michael Spavor is sentenced to 11 years in prison, and China withdraws its ambassador to Lithuania.

The Biologist Who Wasn’t

Chinese state media outlets are quietly removing references to a source named Wilson Edwards, a supposed Swiss biologist and U.S. coronavirus conspiracy whistleblower, after the Swiss Embassy publicly pointed out Edwards does not exist. Edwards appears to be the invention of a minor Chinese propaganda outlet, subsequently copied by others—a practice that is unfortunately common in the state media ecosystem.

The fake source is part of a recent trend in Chinese state media to blame the coronavirus pandemic on a leak from Fort Detrick, the site of a key U.S. Army biological research laboratory. Those conspiracy theories have gained force in the media in recent months, partially in response to surged interest in Wuhan lab leak theories among the U.S. public and U.S. President Joe Biden endorsing further investigation.

Although there is good reason to be skeptical about the Wuhan lab leak theories, they have at least some facts in their favor: the presence of a high-security virus lab near the site of the first documented COVID-19 outbreak. The Fort Detrick claims are comparatively nonsensical.

China’s widespread conspiracy theory push, which began in earnest in 2020, can only worsen relations with the United States. The first wave of false accusations already hardened U.S. officials’ attitudes toward their counterparts in Beijing. The recent rush of claims about Fort Detrick now undercuts efforts by China’s new ambassador to the United States, Qin Gang, to present himself as a reasonable and amiable figure.

Theories that COVID-19 originated in the United States seem to have been successfully sold to much of the Chinese public; around 53 percent of those polled in March 2020 said they believed the virus was a U.S. bioweapon. However, they have gained little global traction. Chinese attempts to shape the overcrowded pandemic conspiracy space—from cartoons to rap—have appeared bumbling and inept. These tactics contrast sharply with those of the anti-Chinese Communist Party (CCP) and pro-Trump administration newspaper the Epoch Times, which successfully established itself as a conspiracy outlet despite operating on a fraction of the budget.

Without any ideological sympathies to tap into, new waves of Chinese nationalist propaganda are likely to flop in the West. But if Beijing ups its game, it might find more takers in developing countries with existing suspicions of the United States.

Spavor trial concludes, Kovrig awaits sentencing. Michael Spavor, a Canadian businessperson detained by China as an apparent political hostage, was sentenced to 11 years in prison on trumped-up espionage charges on Wednesday. Spavor was detained in December 2018 in response to Canada’s arrest of Huawei chief financial officer Meng Wanzhou for extradition to the United States. Another Canadian arrested at the same time, Michael Kovrig, faces sentencing soon.

The case of the two Michaels has wrecked China’s reputation in Canada. But as Canadian Chinese journalist Joanna Chiu points out, Beijing unjustly imprisoned Canadians and others of Asian descent for years without a strong response from Ottawa. Even today, detained Chinese Australian journalist Cheng Lei and other individuals of Chinese descent receive less attention than white prisoners.

Spavor’s sentence is not the worst possible outcome, but it currently offers little hope of release, although some westerners imprisoned in China have been deported long before their sentences formerly concluded. Meanwhile, on Tuesday, fellow Canadian Robert Schellenberg, a convicted drug smuggler whose sentence was raised to execution following Wanzhou’s arrest, saw the death penalty upheld in court.

China-Lithuania spat. China has withdrawn its ambassador to Lithuania and demanded Vilnius recall its own from Beijing after the country allowed Taiwan to open a representative office—a de facto embassy—under its own name in the Lithuanian capital, Vilnius. Typically, retaliatory state media editorials have followed the diplomatic spat, including one describing Lithuania as a “crazy, tiny country.”

In recent years, Lithuania has increasingly opposed China’s influence in Europe, including pulling out of a key China-Eastern Europe group. Its long history as a target of Russian imperialism in part makes it sympathetic to China’s threatened neighbors. Beijing is presumably aware these moves will only worsen its ties with Vilnius, but it seeks to intimidate others through its extreme response.

Forbidden songs. Chinese authorities are forming teams to check the playlists of karaoke joints nationwide for unapproved songs, instead encouraging them to offer material that promotes “socialist core values.” When crackdowns reach this level of pettiness, they’re not really about ideological danger. Instead the initiative reflects a combination of extortive opportunism and officials’ need to demonstrate they are doing something. The censorship machinery must justify its own existence.

Foreign investment risks. The recent crackdown on private businesses has drawn attention to a long-taken-for-granted part of foreign investment in China: variable interest entities (VIEs). Foreign ownership is illegal in many Chinese business sectors, but VIEs circumvent this: Under the business structure, holding companies set up in offshore locations give foreign firms the chance to invest without offering them control over the company.

China has never legalized VIEs, but they are not explicitly illegal either. The government commonly adopts similar gray area strategies to experiment with openness—with the possibility of rollbacks. This tactic also lures people and businesses into a sense of complacency, the often-mistaken conviction that things must go on as they have before.

Beijing has curbed some VIEs in specific sectors, most recently in the crackdown on private education, but recent hostility against foreign stock exchange listings suggests VIEs in other areas could be targeted. For the most part, Western investors and analysts in China are still underpricing the risks of business in an authoritarian state without meaningful rule of law.

Alibaba harassment. Beijing’s ongoing crackdown on private businesses has had one surprisingly positive consequence: opening up room for sexual harassment and abuse cases. Accusations of rape and sexual harassment at technology giant Alibaba published on Aug. 7 went viral, rapidly resulting in the firing of several executives and promises to change corporate culture.

Feminist activists in China have worked for years to publicize and expose such cases, but censors and the legal system have buried many previous efforts. But as with the recent arrest of superstar actor Kris Wu for alleged rape, shifting political winds have forced a stronger response. This doesn’t mean the authorities will grant any sympathy to organized activism. Long-running feminist groups are still being broken up or forced offline.

Academic journal under fire. Eight members of the editorial board of Molecular Genetics & Genomic Medicine, a Wiley-published scientific journal, have resigned over controversies around the publication of papers related to Chinese population engineering projects. Although the journal isn’t a major one, the case shows how China’s growing interests in DNA collection, facial recognition, and ethnic identification are becoming a flash point in global scientific debate.

Chinese scientists generally receive institutional kudos for publishing in foreign journals, but that may shift if Western publications start to shut out ethically dubious papers linked to government projects. 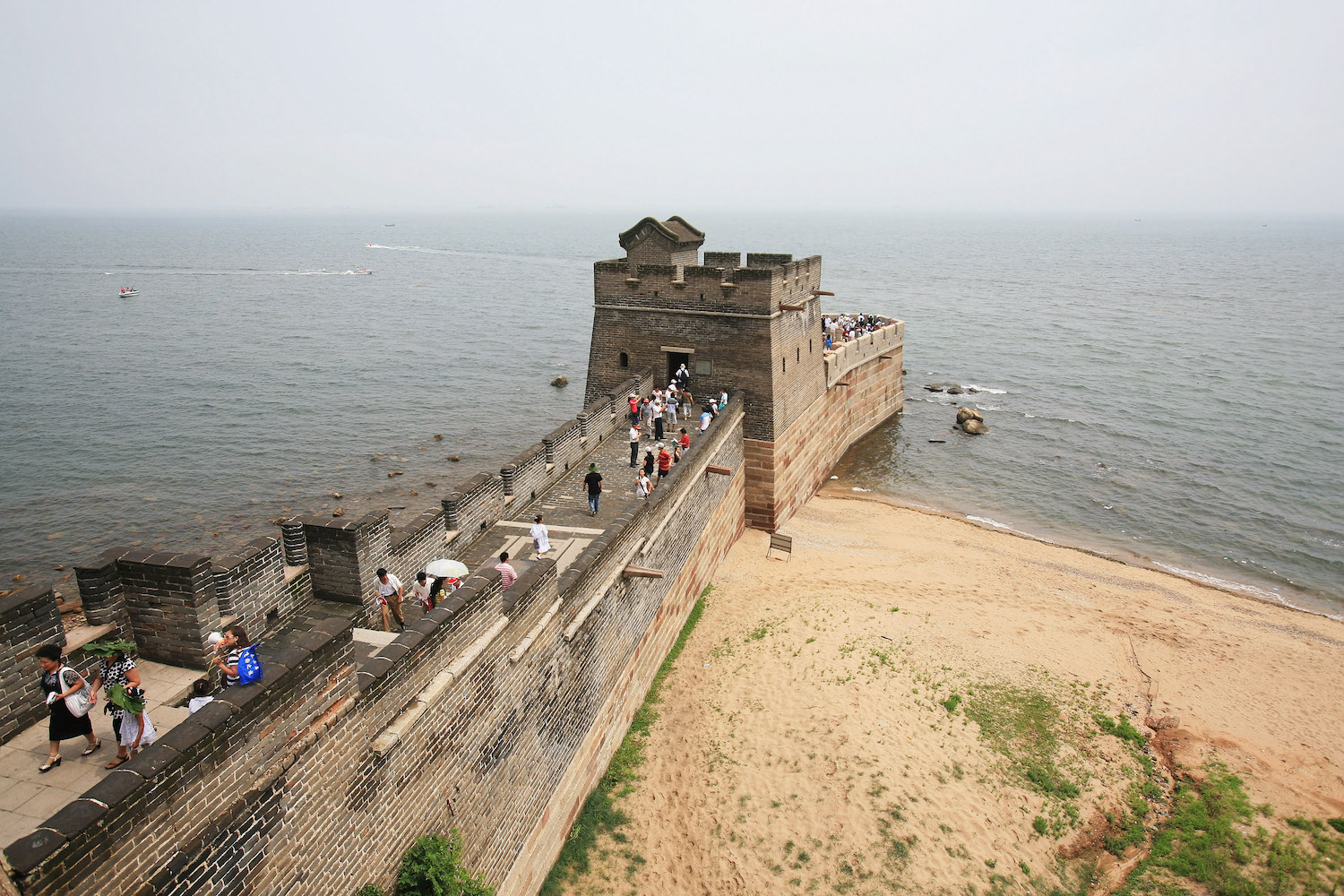 The port city of Qinhuangdao exemplifies the shift in China’s north from a frontier zone to the country’s industrial heartland over the centuries.

Qinhuangdao was originally a garrison town near the mountain pass of Shanhaiguan at one end of the Great Wall, which was a major invasion route for northern horsemen. A sprawling set of fortresses established over the centuries became obsolete when the Qing dynasty, themselves northern invaders, incorporated the territories north of the wall into their empire.

By the 19th century, Qinhuangdao had become a key part of northern China’s coal infrastructure. It is still China’s main coal port, shipping fuel to the rest of the country and for export. Otherwise, it’s a sleepy city sprawling from the port to the mountains that draw tourists to see where the Great Wall meets the sea at Old Dragon’s Head.

Qinhuangdao also includes Beidaihe district, a fishing village that became a beach resort patronized by CCP leaders for an annual retreat. Numerous other spas and hotels do their best with the usually overcrowded shoreline.

Correction, Aug. 13, 2021: Lithuania allowed Taiwan to open a representative office in its capital using its own name, leading China to withdraw its ambassador to the country. A previous version of this article misstated the reason for the diplomatic spat.

You are commenting as . Change your username | Log out
Tags: China, Pandemics