How Did Things Go So Bad So Fast in Afghanistan?

Welcome back to SitRep. Jack is still out on vacation, so his SitRep partner in crime, Robbie, is all by himself today.

Here’s what’s on tap: No good options left in Afghanistan, China and Russia team up for massive military drills, and new Biden officials to join the Pentagon.

Welcome back to SitRep. Jack is still out on vacation, so his SitRep partner in crime, Robbie, is all by himself today.

Here’s what’s on tap: No good options left in Afghanistan, China and Russia team up for massive military drills, and new Biden officials to join the Pentagon.

Is This a ‘Last Chopper Out of Saigon’ Moment for Afghanistan?

How did things get so bad, so fast?

The Taliban is sweeping aside Afghan defense forces at an alarming rate—so fast, we’ve had to update this newsletter multiple times to keep pace. Publicly, Biden administration officials are clinging to calls for peace negotiations and threatening the Taliban with international isolation if it takes the country by force.

Where things stand today. Behind the scenes, current and former officials tell SitRep they are stunned by the rapid Taliban advance and say any hopes for peace talks are gone. U.S. intelligence assessments are now reportedly predicting Kabul could fall in 90 days, making previously reported assessments that Kabul could fall in six to 12 months seem rosy by comparison.

Ten of Afghanistan’s provincial capitals have fallen to the Taliban. The U.S. Embassy in Kabul is planning to reduce its footprint in the coming weeks—coupled with a brief troop surge to facilitate—and is reportedly considering a full evacuation if the situation deteriorates further. The picture makes Vietnam comparisons—especially the dreaded “last chopper out of Saigon” moment—uncomfortably close.

As 20 years and $2 trillion of war and nation building seem to be going up in smoke in the course of weeks, there will be plenty of autopsies written on the U.S. War in Afghanistan. We won’t try to tackle those in one single newsletter. Instead, we’ve collated some bite-size takeaways from interviews with current and former U.S. and Afghan officials and experts about how things got so bad so fast.

Corruption at the core. Back in March, a top U.S. lawmaker, Rep. Stephen Lynch, told us that corruption in the Afghan government is “as big a threat” as the Taliban, and we’re seeing that play out in real time on the battlefield today.

As Lynne O’Donnell reports for FP from Kabul this week, “[t]he Ministries of Defense and Interior are notoriously corrupt, and the experts also cite widespread ineptitude, lack of leadership, and self-interest” in the rapid collapse of Afghan security forces. Just two examples O’Donnell cites: Some Afghan police haven’t been paid for months, while sorely-needed ammunition and food deliveries are pilfered before they reach soldiers.

But the Air Force is stretched thin. In a video conference interview late last month with SitRep and other reporters, several Afghan lawmakers begged for more support for the Afghan Air Force, saying about one-third of the fleet of 160 aircraft were inoperable, thanks in large part to the departure of Pentagon contractors.

Naheed Farid, a lawmaker from Herat, said at the time, “If those aircraft cannot fly and cannot target the gatherings of Taliban, and then the Taliban become stronger and they storm into the cities, they will create a terrible situation.” On Thursday, the Taliban conquered Herat, Afghanistan’s third-largest city.

The loss of contractors is key. Along with the withdrawal of U.S. and NATO troops, thousands of contractors who supported coalition and Afghan forces also left. They didn’t make the headlines, but officials say they were effectively the logistical backbone of a functioning Afghan military. Without them, all the things that keep a military functioning—supply chain management, training, equipment maintenance—are significantly hindered.

The last pieces of leverage the U.S. has over the Taliban is weak, at best. The latest threat the Biden administration is waiving over the Taliban’s head is one of “international isolation” if it takes power by force. Still, while weak, it’s not an entirely useless threat; the Taliban has been courting regional powers and trying to portray itself as a legitimate international actor.

“It’s not surprising that the U.S. is leaning very heavily on this talking point, because that’s what it has left to lean on,” Laurel Miller of the International Crisis Group told SitRep. “But I don’t expect it to be a very powerful form of leverage … in a context where what the Taliban is fighting for first and foremost is power.”

There are other retaliatory measures the United States and its allies can take to punish the Taliban for its use of force and human rights abuses, such as revoking international travel waivers, cutting U.S. aid to Afghanistan, and sanctions. But every expert and official we spoke to agrees that not even the heaviest sanctions will convince the Taliban to halt their offensive, especially when they have the momentum.

The Senate on Wednesday confirmed former Democratic Rep. Gil Cisneros as the undersecretary of defense for personnel and readiness.

Also on Wednesday, the Senate confirmed former Democratic Sen. Ken Salazar as the next U.S. ambassador to Mexico.

Sasha Baker, a member of the National Security Council and former top adviser to Sen. Elizabeth Warren, will be tapped as deputy undersecretary of defense for policy, as Defense News’s Joe Gould reports.

Drill, baby, drill. Washington’s two not-so-favorite rivals, China and Russia, are teaming up to conduct joint military drills in northwestern China. There’s about 10,000 troops involved in the exercise, which is ostensibly for honing counterterrorism tactics and weapons testing but also—like most military exercises—about flexing muscles and sending signals to adversaries. Moscow and Beijing are far from friends, but they’ve grown more willing to cooperate on the military side of things in recent years.

Meet Iran’s new cabinet. Spoiler alert: They aren’t big fans of the West. New Iranian President Ebrahim Raisi has nominated a hardline anti-Western diplomat, Hossein Amirabdollahian, to be his foreign minister and Gen. Ahmad Vahidi, a former defense minister, as his new minister of the interior. Vahidi was head of the Revolutionary Guards’ Quds Force during the infamous 1994 bombing of a Jewish center in Argentina that killed 85 and wounded hundreds more. He’s still wanted by Interpol over his role in the bombing.

None of these picks are particularly surprising but, taken together, they don’t bode well for any sort of rapprochement between Washington and Tehran—or Biden’s last-ditch efforts to keep Iran nuclear deal talks from circling the drain.

No one plan can have all that ‘Power.’ As the conflict in Tigray spirals out of control, Ethiopia, once the anchor of stability in East Africa, is teetering on the brink. U.S. Agency for International Development chief Samantha Power visited Ethiopia last week to raise concerns about the security and humanitarian crisis there, part of a broader U.S. plan to try and pressure the Ethiopian government to de-escalating tensions with the rival Tigray People’s Liberation Front.

As part of that plan, officials tell FP that Power requested a meeting with Ethiopian Prime Minister Abiy Ahmed while she was there, but Abiy rebuffed that request. It’s another sign of worsening relations between Washington and East Africa’s most populous and powerful country. 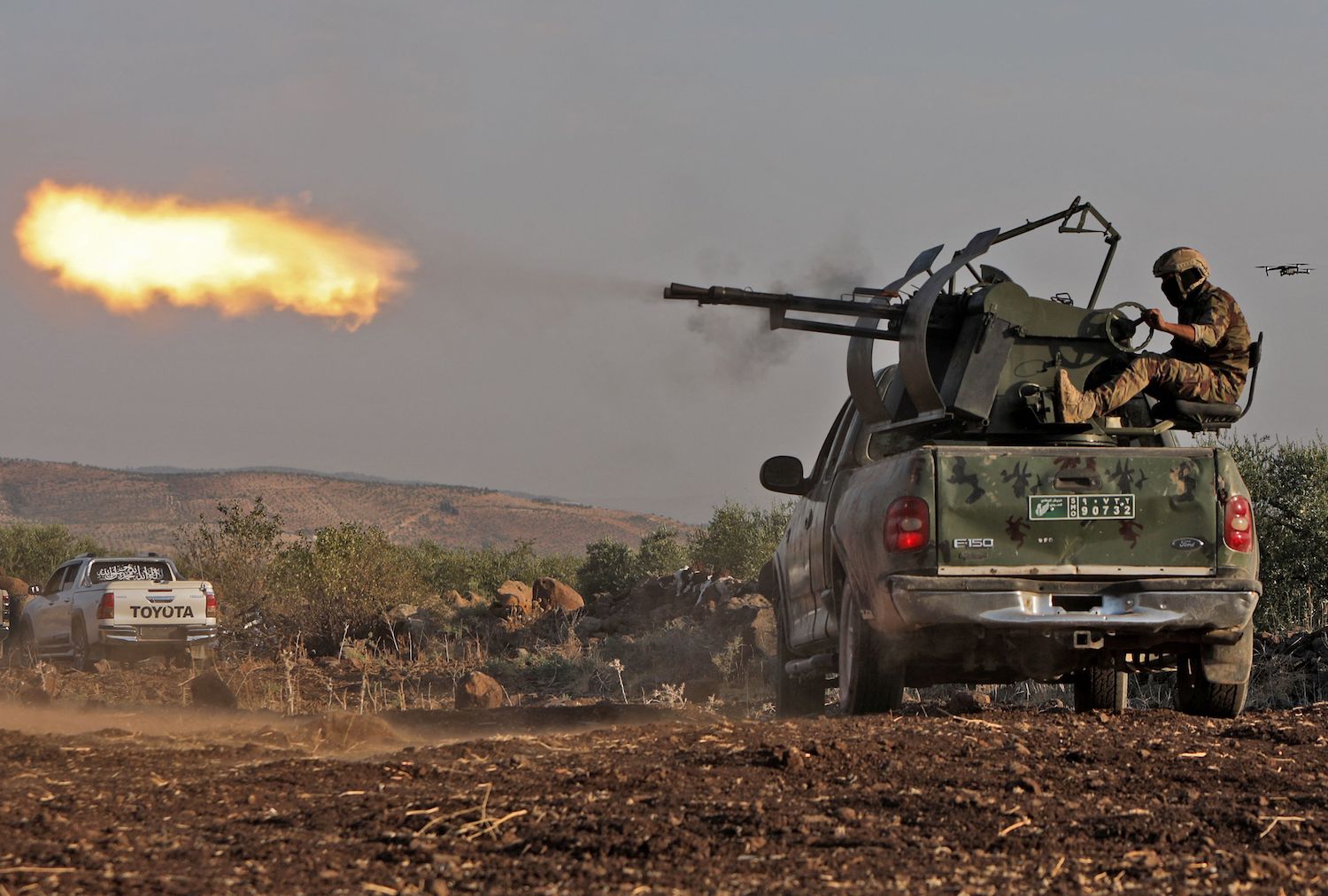 A Turkish-backed Syrian fighter opens fire from the back of a technical vehicle during military drills in the district of Sheikh Hadid in the Afrin region of northwestern Syria on Aug. 5.Bakr Alkasem/AFP via Getty Images

“Bin Laden Determined to Strike in U.S.”: Twenty years ago this week, U.S. intelligence officials warned in a memo to President George W. Bush that Osama bin Laden intended to carry out an attack against the United States.

Read the full memo, declassified in 2004, here. This memo was sent to Bush 36 days before the Sept. 11 terrorist attacks.

“We’re watching the Afghan people pay the price for our self delusion.”

You are commenting as . Change your username | Log out
Tags: Afghanistan, China, Russia, United States

NEW FOR SUBSCRIBERS: Want to read more on this topic or region? Click + to receive email alerts when new stories are published on United States, China, Russia, Afghanistan