South Asia Is on the Front Lines of the Climate Crisis

The highlights this week: A United Nations report underscores South Asia’s climate vulnerability, regional players try to bring Afghanistan back from the brink as the Taliban advance, and the Tokyo Olympics gives India a lift.

The highlights this week: A United Nations report underscores South Asia’s climate vulnerability, regional players try to bring Afghanistan back from the brink as the Taliban advance, and the Tokyo Olympics gives India a lift.

South Asia’s climate change vulnerability has long been apparent. Rising sea levels and flooding threaten the coastal states of Bangladesh, India, Pakistan, and Sri Lanka. Landlocked Afghanistan, Bhutan, and Nepal face rising temperatures, drought, and glacial melts. The region is also home to the lowest lying country in the world: the densely populated island nation of the Maldives, which could be submerged in the not-too-distant future.

Almost 700 million people—nearly half of South Asia’s population—have been affected by at least one climate-related disaster in the last decade, according to the World Bank. India and Pakistan ranked among the 20 countries most affected by climate change in the 21st century in the think tank Germanwatch’s 2020 Global Climate Risk Index. A recent McKinsey Global Institute report found climate impacts could rob South Asian countries of up to 13 percent of their GDP by 2050.

The IPCC report reaches similar conclusions as a 2020 study by India’s Ministry of Earth Sciences, which forecasted that in the coming decades, India will become dryer and hotter, with average temperatures increasing by nearly 4 degrees Celsius by the end of the century. It also predicted longer monsoons, warming temperatures in the Indian Ocean, and sea level rises of up to nearly one foot in the coming decades.

The region’s climate vulnerability is a security threat. Worsening water shortages increase the likelihood of tensions among India, Pakistan, and China over shared rivers. Pakistan’s main surface water source is the Indus River, which flows downstream from Indian-administered Kashmir. The effects of climate change could also sharpen the grievances of Baloch insurgents in Pakistan and Naxalite insurgents in India, who both accuse governments of seizing water and other precious resources.

But mass climate-induced migration could be the most potent trigger of destabilization. A 2018 World Bank study projects nearly 40 million climate migrants in South Asia by 2050, including more than 13 million in Bangladesh alone, without sufficient climate-friendly public policies. Even with those policies in place, the study still projects nearly 20 million climate migrants by 2050.

One of the IPCC report’s main messages is there is still time to avert climate catastrophe through stronger mitigation policies. And to their credit, South Asian countries have produced many such policies. But poor monitoring and enforcement, corruption, and insufficient funding have undermined their efficacy, as I argued last year.

Without mitigation, the climate crisis is likely to exacerbate South Asia’s many fault lines and volatilities. In the coming decades, conflict between India and Pakistan could break out over water in addition to territory, and Afghan refugees could be fleeing drought, not just war.

August 17: The 16th anniversary of the 2005 Bangladesh bombings, which saw around 500 blasts across the country, is remembered.

Regional diplomacy on Afghanistan. The Taliban have made major and unprecedented gains in Afghanistan in the last week, seizing nearly a dozen provincial capitals in a matter of days. Amid this cascading violence, regional diplomacy has intensified. Two meetings this week focused on how to get the peace process back on track: one between the Troika Plus (China, Pakistan, Russia, and the United States) and one between China, Pakistan, Uzbekistan, the United States, the United Kingdom, and EU and U.N. representatives.

There is little hope of rejuvenating the intra-Afghan dialogue unless Afghan forces can regain battlefield momentum. But it is a good sign regional players are talking. They don’t have the luxury, as the United States does, of leaving Afghanistan and avoiding the war’s spillover effects, such as refugees, the drug trade, and cross-border terrorism.

Rohingya vaccination campaign. Bangladesh is in the throes of a coronavirus surge fueled by the highly contagious delta variant. The nationwide test positivity rate is about 30 percent, and less than 5 percent of the population is fully vaccinated. That makes Dhaka’s decision this week to launch a vaccination campaign for Rohingya refugees all the more urgent.

About 1 million Rohingya live in crowded camps in Bangladesh’s Cox’s Bazar region, most of whom fled military violence in neighboring Myanmar in 2017. Community leaders, health care volunteers, and people over age 55 will be among the first to get vaccinated.

India makes history in Tokyo. It hasn’t been an easy year for India, but the Olympic Games in Tokyo were kind to a country in need of a lift. The men’s and women’s field hockey teams both reached the semifinals for the first time. And then came the coup de grace: Indian javelin thrower Neeraj Chopra became the first Indian gold medalist in his competition and only the second Indian Olympian to win an individual gold medal in any competition.

Chopra’s victory produced a rare moment of solidarity between India and Pakistan. Pakistani javelin thrower Arshad Nadeem finished fifth, and the two Olympians have reportedly struck up a friendship. According to Nadeem, Chopra said it was simply “bad luck” that Nadeem didn’t perform better.

This week, Japan’s government released a report on the death of a Sri Lankan woman in one of its immigration detention centers in March.

Wishma Sandamali, 33, had been detained for six months after overstaying her visa; she was arrested in a police station while seeking protection from an abusive boyfriend. Her health rapidly deteriorated in detention, but her pleas for medical assistance went unanswered. The report proposes reforms, including better medical care and more staff, but immigration activists say these recommendations are insufficient.

Sandamali’s case has received relatively little attention outside of Japan, although Piyumi Fonseka, a journalist for Sri Lanka’s Daily Mirror, has reported extensively on the case. Sri Lanka’s government, meanwhile, has not said much about it in public. Japan is one of Sri Lanka’s top bilateral donors. 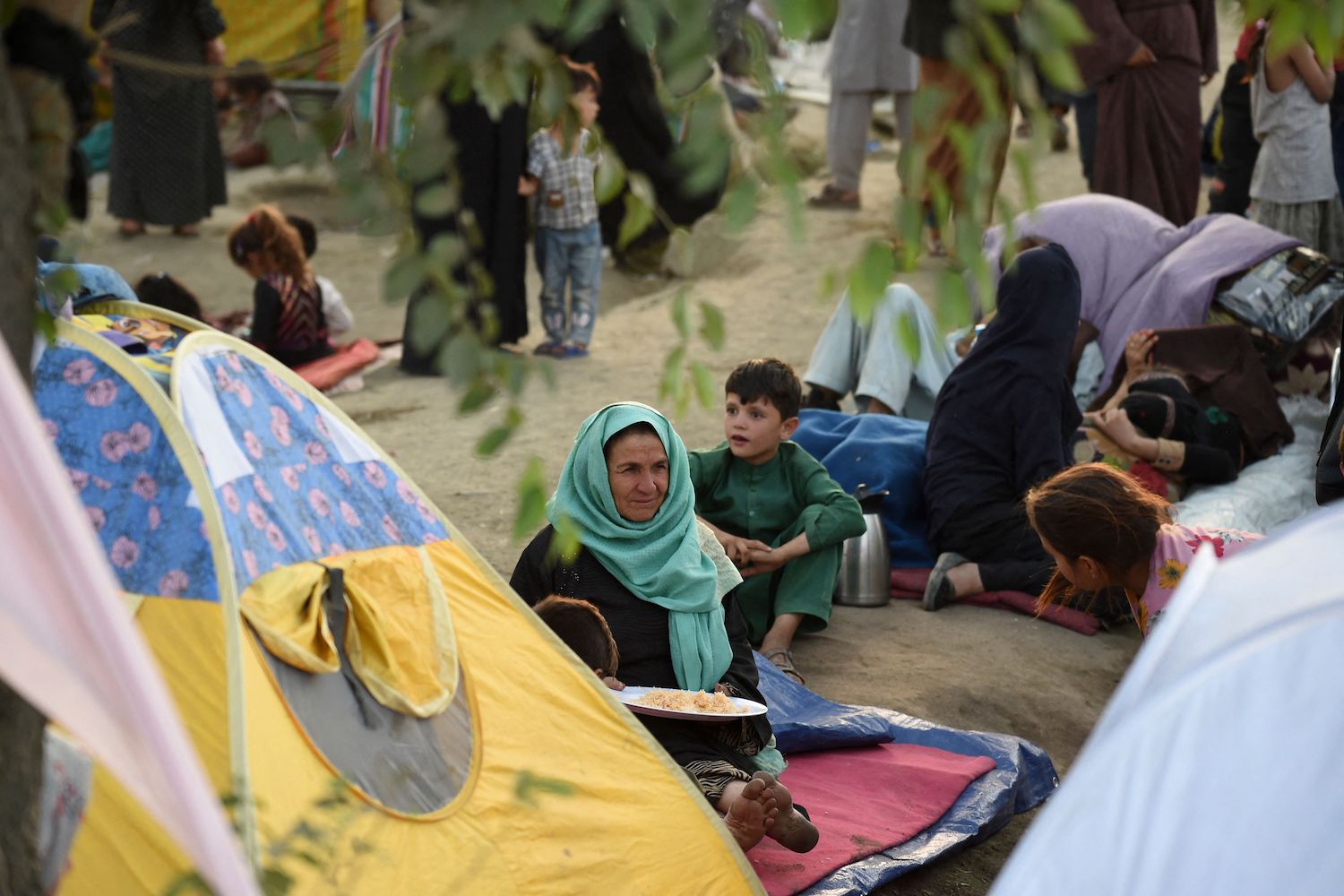 Internally displaced Afghan families who fled from Kunduz, Takhar, and Baghlan provinces sit near tents at Sara-e-Shamali in Kabul on Aug. 11.WAKIL KOHSAR/AFP via Getty Images

“In speaking to Afghans, the impression I have now is of a population waiting apprehensively for a dark shadow to pass over the brighter futures they once imagined.”

—Deborah Lyons, the head of the United Nations Assistance Mission in Afghanistan, in a U.N. Security Council briefing on Aug. 6

A new report by the Uyghur Human Rights Project and Oxus Society for Central Asian Affairs details how China has targeted Uyghur refugees in Pakistan and Afghanistan since the 1990s. Authors Bradley Jardine and Robert Evans focus on how Beijing has rewarded its close ally Islamabad for helping it crack down on the Uyghur community.

“In exchange for development assistance, Pakistan signed extradition treaties, arrested individuals at China’s request, and rebuked critics of China’s harsh policies, all of which made it easier for China to continue repressing Uyghurs,” they write. The report puts Pakistan in an awkward position given it refuses to comment publicly on China’s abuses against the Uyghurs.

Jumakhan Rahyab and Meena Yakobi, two young Hazara analysts, warn in South Asian Voices that genocide against Afghanistan’s Hazara minority is a real possibility. “The Hazara community faces an especially gloomy future: an existential threat to their wellbeing in the form of systemic oppression and marginalization,” they write.

In the Dhaka Tribune, Riya Sinha, a researcher based in New Delhi, argues Bangladesh and India need to make better efforts to strengthen infrastructure at their border. “By improving the impediments in physical connectivity, both countries can capitalize on the economic potential” of bilateral and regional trade, she writes.

Columnist Ozer Khalid writes for Pakistan’s Express Tribune in support of a recently established “New Quad” of Afghanistan, Pakistan, Uzbekistan, and the United States: “The involvement of Pakistan and the U.S. in the New Quad helps the former balance great superpowers in light of the New Cold War between Washington and Beijing.”

You are commenting as . Change your username | Log out
Tags: Climate Change, South Asia

NEW FOR SUBSCRIBERS: Want to read more on this topic or region? Click + to receive email alerts when new stories are published on Climate Change, South Asia