A U.N. official calls efforts in the region “a model of solidarity.”

The highlights this week: A new report details the results of Latin America’s drive to accept Venezuelan migrants, the IPCC forecasts weather shifts in the region, and an Argentine internet comedy act processes Lionel Messi’s transfer.

The highlights this week: A new report details the results of Latin America’s drive to accept Venezuelan migrants, the IPCC forecasts weather shifts in the region, and an Argentine internet comedy act processes Lionel Messi’s transfer.

On Friday, envoys representing Venezuelan President Nicolás Maduro and the country’s opposition coalition are expected to sit down in Mexico for talks. The opposition is led by former head of the legislature Juan Guaidó, whom the United States and some other countries recognize as Venezuela’s rightful leader due to the irregularities of recent elections.

Maduro is in firm political control of Venezuela amid a catastrophic economic crisis, and the sides will likely discuss the chance of sanctions relief from the United States in exchange for Maduro lifting restrictions on political opponents. At best, political scientist Maryhen Jiménez Morales wrote Wednesday, the meeting could lay a foundation for a democratic opening that would surely be long and slow.

In the meantime, the exodus of Venezuelans fleeing economic and political strife continues. And during the COVID-19 pandemic—remarkably, given responses to mass migration elsewhere in the world—so too has Latin American countries’ ad hoc drive of accepting them.

Since around 2015, more than 4.6 million Venezuelans have migrated to other parts of Latin America and the Caribbean. Venezuela’s current total migrant outflow of 5.6 million is second in size only to the Syrian migrant crisis. For the most part, those Venezuelans who entered other Latin American countries and lacked regular status were not detained and held in camps, but allowed to move freely.

Gradually, but repeatedly since 2017, Venezuelan immigrants have been granted permission to stay either temporarily or permanently in their host countries, receiving access to health and education services.

This trend has continued in recent months, despite pandemic border closures. In January, the Dominican Republic announced a new temporary protection program for Venezuelan migrants. In February, Colombia unveiled a 10-year protected status for Venezuelans that includes a pathway to residency, a move expected to affect as many as 1.7 million people. In June, Ecuador disclosed that it will begin to regularize its Venezuelan population of some 430,000, and Peru published new regulations on granting refugee status in July.

The upshot. While critics have called for these measures to be less sporadic and more permanent, their steady forward momentum has nonetheless allowed Venezuelans to establish some social and economic footholds in receiving countries, as detailed in a new study by the Migration Policy Institute (MPI) and the International Organization for Migration.

The study looked at Venezuelan migrant populations in five South American countries between 2017 and 2021 and found that, in four of the five countries, the share of child migrants enrolled in school rose over that period. The upper estimate for school enrollment was as high as 93 percent in Chile and 84 percent in Peru.

In three of the countries, the share of migrants who were employed also increased—prior to the pandemic. Many migrants said they had severe difficulties getting their university credentials recognized in host countries, suggesting that easing the recognition process could be a straightforward step to reducing underemployment.

In another study, BBVA Research looked at the macroeconomic effect of Venezuelan migration on Peru and found that, from 2018 to 2019, it had a net positive fiscal impact of .08 percent of the country’s GDP.

A model for other regions? U.N. High Commissioner for Refugees Filippo Grandi said that Latin America’s response to Venezuelan migrants “should serve as a model of solidarity for the world.”

While some elements of its response are distinct to the region—such as the commonality of language—others could serve as lessons for elsewhere, MPI’s Diego Chaves-González said in an interview with Foreign Policy. These include platforms for coordination between regional governments that draw on technical expertise from nongovernmental organizations and the United Nations. Willing to be flexible, governments have mostly taken pragmatic steps rather than erecting barriers, such as by issuing temporary protective status for migrants when small asylum systems became overwhelmed.

“I think there is a general conception about the importance of regularizing our migrants,” Chaves-González said. “Let’s understand who our migrants are, and what skills do they have.”

He cautioned that the strides in Venezuelans’ socioeconomic integration are still very preliminary, and that changes in the region’s governments could always alter policy. But for now, there is a firm-enough consensus around Venezuelans’ regular status that many countries have shifted some efforts to considering questions about migrants’ jobs, healthcare, and education.

Chaves-González and his colleagues, for their part, are now researching strategies for diffusing the anti-migrant sentiment that has appeared in some Latin American communities as a result of the Venezuelan wave.

“There is no recipe for social cohesion,” he said. “But we’ve seen it’s important to acknowledge people’s fears head on, instead of trying to persuade them they’re wrong—to listen to the spirit of the concerns, discuss the costs of migration as well as the benefits,” and have deeper discussions about how social contracts could change for the better.

Such efforts include crafting public policies that benefit both migrants and citizens of receiving countries, MPI noted in its report, praising a Peruvian push to improve school enrollment that targeted both migrant and Peruvian children.

A climate conclave for the region. Argentine President Alberto Fernández is reportedly planning a climate summit for Latin America and the Caribbean that would act as a run-up to November’s U.N. Climate Change Conference in Scotland. It may be able to galvanize decarbonization efforts in a region that has devoted little of its post-pandemic recovery plans to greening economies.

Protest forensics. A Facebook group was behind the first protest in Cuba’s recent wave of unrest. Tracing the page—a forum for community concerns in the town of San Antonio de los Baños—reveals the importance not only of internet access, but also links to the Cuban diaspora, in sparking democratic demands. Cuban emigrés encouraged the protesters and expressed solidarity on such message boards, Reuters reported.

Protest fallout. Cuba’s government took another step toward liberalizing the island’s economy by allowing new categories of small- and medium-sized private businesses to operate for the first time, presumably a response to demonstrators’ economic grievances. Meanwhile, according to human rights watchdogs, at least 555 people were still detained in the wake of the protests, with 45 missing, as of Aug. 6. 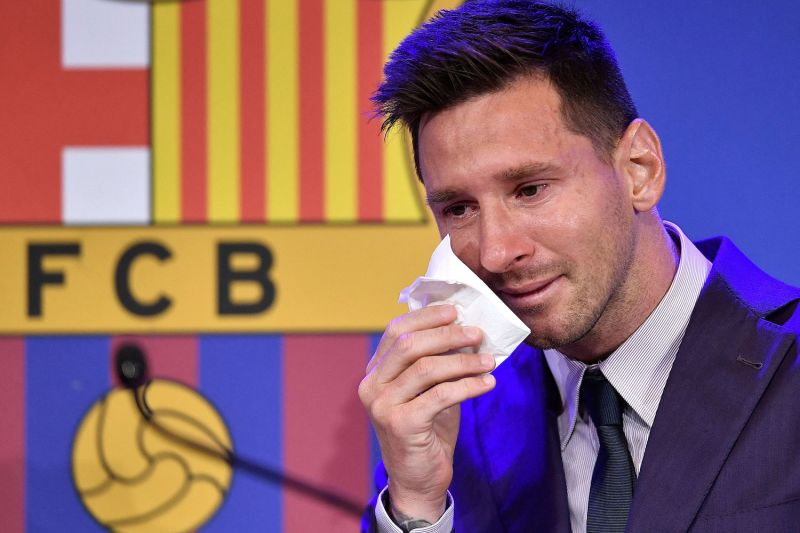 A tectonic transfer. Argentine soccer star Lionel Messi transferred from FC Barcelona to Paris Saint-Germain (PSG) for an around $41 million per year net salary. The move is emblematic of the economics of modern soccer—from the financial power of nation state-backed clubs to the apparent regulatory soft-spot they are afforded. Qatar bankrolls PSG and is preparing for the spotlight when it hosts the World Cup next year. But for many fans who had watched Messi perform in the same club jersey for 20 years, an anomaly in today’s high-trading game, the news was a gut punch.

Argentine comedian Jero Freixas, who has become an internet sensation for posting satirical videos in which he argues about soccer with his wife and friends, mournfully processed the transfer in a Barcelona jersey at his kitchen table. “This is a terrible divorce for all of us,” he told his bewildered wife. “Stop believing in love that lasts a lifetime.”

Today is the 500th anniversary of the Spanish defeat of the Aztec empire. What was the main language of the Aztecs, which gave root to many Spanish words used today?

In Focus: The IPCC’s Eye 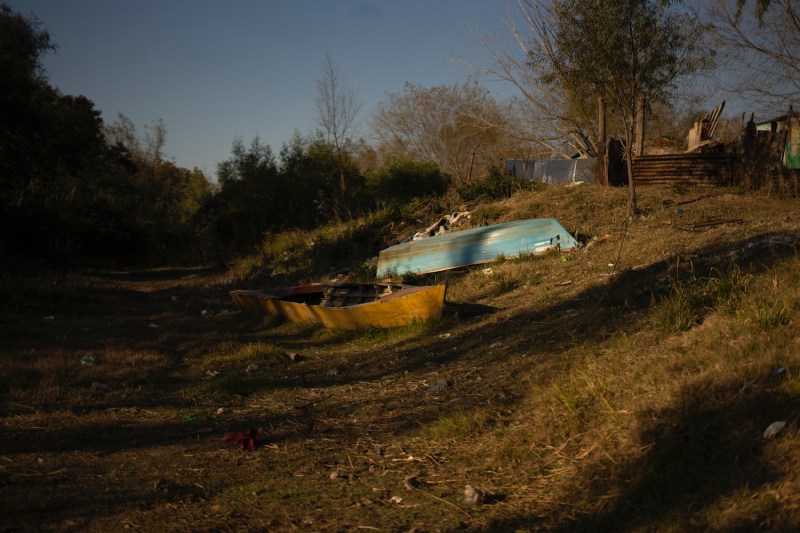 According to the U.N.-appointed Intergovernmental Panel on Climate Change (IPCC), which released a grim new report this week, temperatures in Latin America and the Caribbean are projected to rise higher than the global average in coming years. The report gave specific forecasts that offer insight into how weather, business, and migration in the region will likely be affected.

Increased Droughts. Droughts such as those currently vexing Mexico, Brazil, and Argentina are becoming increasingly common in Central America and will increase in much of South America, the IPCC said. While the consequences can be especially grave for farmers—droughts in Central America have spurred northward migration in the last few years—they can also reduce shipping capacity on rivers that are drying up. That’s the situation currently unfolding in Argentina, where the Paraná river is at its lowest level in almost 80 years.

Hurricanes. Tropical storms like Eta and Iota, which ravaged Nicaragua and Honduras last year, are predicted to become more intense. The U.S. National Oceanic and Atmospheric Association announced on Aug. 4 that this year’s Atlantic hurricane season will likely be of above-average intensity, with some 15 to 21 named storms with winds of 39 miles per hour or greater.

Glacier melt in the Andes. The likely continuation of glacier melt in the Andes mountains poses dangers to the downstream ecosystems fueled by its water—cities and also agricultural beds—as well as to the snow-focused tourism industry. What was once the world’s highest ski resort, in Chacaltaya, Bolivia, became a ghost town after a mountain glacier had melted by 2009.

Ports at risk from rising seas. The IPCC reported that over the last few decades, sea levels in the South Atlantic Ocean have risen at a rate faster than the global mean, and at a lower rate in the East Pacific. The issue has prompted study by Brazil’s biggest Atlantic seaports, which are the world’s largest for handling coffee, soybeans, and sugar. A 2017 report found that sea level at the port of Santos could rise 18 inches by 2100, causing the city as much as $467 million in cumulative damage.

You are commenting as . Change your username | Log out
Tags: Migration and Immigration, Venezuela
Latest