What’s Next for Afghanistan?

As the Kabul situation worsens, the White House stares into the abyss.

Welcome to Foreign Policy’s SitRep. It’s been a long week, so let’s get straight into it.

Here’s what’s on tap for the day: The Biden administration faces long-term questions on the future of Afghanistan, the United States and Canada look to upgrade missile defense, and the U.S. Navy responds to humanitarian disaster in Haiti.

Welcome to Foreign Policy’s SitRep. It’s been a long week, so let’s get straight into it.

Here’s what’s on tap for the day: The Biden administration faces long-term questions on the future of Afghanistan, the United States and Canada look to upgrade missile defense, and the U.S. Navy responds to humanitarian disaster in Haiti.

20 Years of Failure—So What Now?

The human tragedy unfolding in Afghanistan has left an entire generation of national security practitioners in Washington shellshocked, to say nothing of the Afghan population they collectively failed. Many Afghans who risked their lives to help America’s war efforts are in limbo.

It is increasingly likely that those not evacuated in the near term will be left to the Taliban’s mercy, a grim reality and an indefensible failing on the part of the U.S. government and the former Afghan government it propped up. It is still too soon to tell, and we hope we are wrong.

Here in the U.S. capital, hot takes and finger pointing have already been flooding in, and there’s not much we can add that hasn’t already been said.

Instead, we’ll outline some longer-term questions about what happens next, based on a slew of interviews we’ve done in the past few days with Biden administration officials, foreign diplomats, experts, and sources in Afghanistan. Oh, and we’ll point you to some of the best analysis we’ve read so far on the debacle to help you draw your own conclusions.

Will more Afghans flee the country?

The Biden administration and U.S. allies, particularly in Europe, are likely to face a long-term refugee crisis from Afghanistan, well beyond the 22,000 Afghan special immigrant visa applicants and their families who are trying to get to Kabul airport for evacuation flights—most of them on their own. There are already calls from advocacy groups to resettle more Afghans: Just 2,000 have been flown to the United States since July, according to Reuters.

Can the Taliban victors form a viable new government?

As bureaucrats in Washington try to sort through the long visa queue, senior Taliban leaders are looking to tighten their grip on power: They have already begun meetings with former Afghan President Hamid Karzai and the prominent politician Abdullah Abdullah.

The Taliban, who are eager to see foreign aid to Afghanistan continue, insist they’ve changed—that they’re less brutal and more respectful of women’s rights than during their rule in the 1990s. Most Afghans and Western officials are justifiably skeptical. But the Biden administration and Western governments—who hold the purse strings on billions of dollars in Afghan assets kept in banks outside of the country—will have to wait and see whether the Taliban live up to their word.

How can the United States stop the rise of terrorist groups?

The Pentagon has long insisted that it would be able to maintain a so-called over-the-horizon presence from other places near Afghanistan to conduct airstrikes. But have all those plans gone out the window now that the Taliban are in charge?

Even if the Biden administration pulls off a successful evacuation of Americans, Afghan interpreters, and others trying to hitch a ride out of Hamid Karzai International Airport in Kabul, they’ll still need to prevent Afghanistan from once again becoming a safe haven for terrorist groups. On Thursday, Pentagon spokesperson John Kirby insisted the United States still had a “robust” ability to conduct strikes from outside of the country, if needed.

But American airpower outside of the country did little to deter the Taliban from a lightning offensive that stunned top U.S. officials and military planners. Maintaining intelligence and counterterrorism capabilities will be, to say the least, significantly more difficult in a Taliban-ruled Afghanistan. It’s also unclear whether airstrikes alone could do much to stop organizations like Afghanistan’s Islamic State franchise or, more importantly, al Qaeda from regrouping, either.

What about America’s allies?

White House officials spent much of the week backpedaling on U.S. foreign policy around the world in the wake of the Taliban takeover. What would it mean for American treaty allies and partners around the world who are depending on Washington if they get in a jam?

“We made a sacred commitment to Article Five that if in fact anyone were to invade or take action against our NATO allies, we would respond,” President Joe Biden told ABC’s George Stephanopoulos. “Same with Japan, same with South Korea, same with Taiwan. It’s not even comparable to talk about that.” (Administration officials were later forced to clean up these remarks: Official U.S. policy does not commit to the defense of Taiwan from an attack.)

Who will be held accountable—and what will Congress do?

When asked to reflect on the chaotic evacuation of Americans, Afghans, and U.S. allies from Afghanistan, Chairman of the Joint Chiefs of Staff Mark Milley said repeatedly at the Pentagon podium on Wednesday that the time for after-action reviews (the military’s form of post hoc lessons learned and finger pointing) would come later. But Congress—and even some from within the Democratic Party—want answers now.

Keep in mind that many of these lawmakers have been in office for a decade or longer and bear oversight responsibility for the broader tragedy unfolding in Afghanistan. In 20 years of conflict, the number of times U.S. lawmakers have voted to declare war in Afghanistan is… zero. Will their Monday morning quarterbacking also be directed inward?

The Smartest Reads We’ve Come Across on Afghanistan

There are plenty of takes out there on how things went so wrong in Afghanistan—and, as usual, some are good and many are flawed. We’ve sifted through a lot of them over the past week, and here are some of the best you should add to your reading list if you haven’t already:

From the spook: In Just Security, a must-read on the missteps by the Biden and Trump administrations that led us to this moment, from Douglas London, a former CIA counterterrorism chief for the region.

From the scribe: Exceptional analysis here from Sarah Chayes, a former reporter and top advisor to U.S. military commanders, trying to make sense of what happened.

From the airman: Ian Fritz, an Air Force veteran, reflects on what he heard snooping on the Taliban from the skies over Afghanistan.

From the expert: Anchal Vohra, an FP columnist, writes on the new power struggles within the ranks of the victorious Taliban and what it means for the country’s future government.

Col. Daniel Mouton has joined the National Security Council as director for political-military affairs for the Middle East, North Africa, and the Gulf region, an NSC official confirmed to SitRep. He most recently was chief of military cooperation at the Pentagon.

Ryan Kaminski has joined the U.S. Agency for International Development as an LGBTI advisor.

Likely updates include adding and modernizing the bilateral sensor network between the two countries. We haven’t seen a projected price tag for this yet, but we’re asking around, so stay posted.

Crisis response. The U.S. Navy is deploying an amphibious warship, the USS Arlington, to Haiti to assist in the humanitarian response to a devastating earthquake on Aug. 14 that has killed nearly 2,000 people. Pentagon spokesperson John Kirby said there are nine U.S. Coast Guard cutters available to help and four U.S. Southern Command field hospitals will be set up in southern Haiti by the end of the week to help with disaster response. 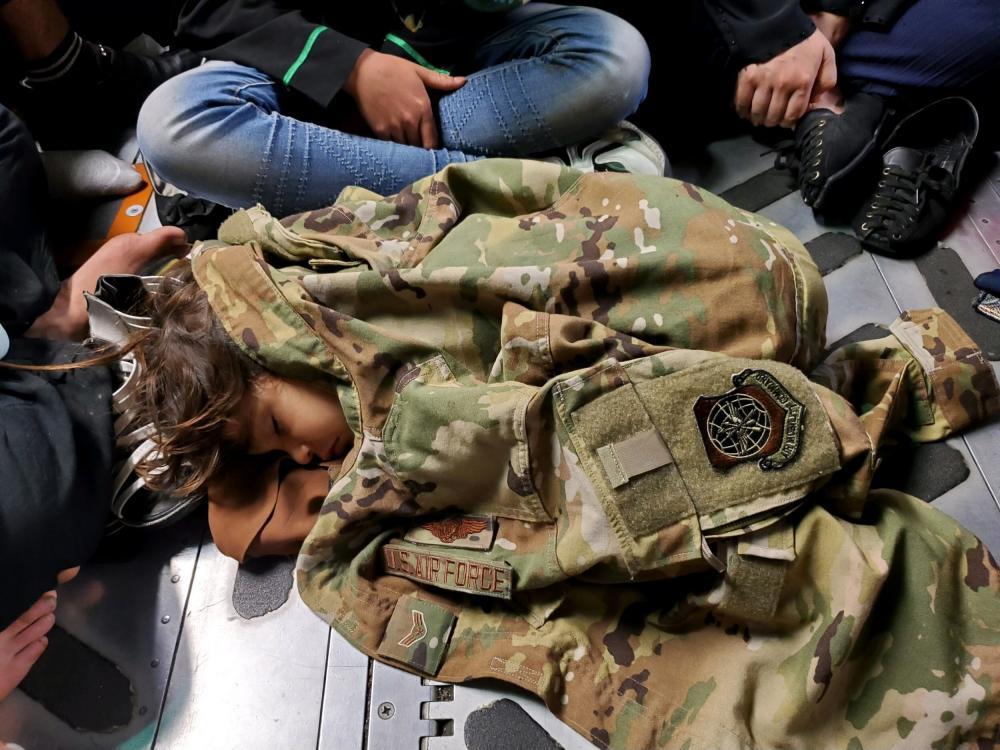 An Afghan child sleeps on the cargo floor of a U.S. Air Force C-17 Globemaster III, kept warm by the uniform of the C-17 loadmaster, during an evacuation flight from Kabul on Aug. 15.U.S. Air Force Courtesy Photo

“We’re gonna go back in hindsight and look, but the idea that somehow there’s a way to have gotten out without chaos ensuing, I don’t know how that happens.”

Wally the Walrus. Feeling like taking a rest? So is this walrus. Our young tusked friend in West Cork, Ireland—dubbed “Wally” by locals—ruined several boats by hauling himself up to nap, leading to thousands of euros in damage. So Seal Rescue Ireland has given Wally a large pontoon to rest on, according to the Irish Examiner. Thanks for a brief moment of respite from the grim week, Wally, and happy napping.

You are commenting as . Change your username | Log out
Tags: Afghanistan, Middle East and North Africa, Security, United States

NEW FOR SUBSCRIBERS: Want to read more on this topic or region? Click + to receive email alerts when new stories are published on Security, United States, Middle East and North Africa, Afghanistan