A Non-Interventionist Region Reacts to Afghanistan

The factors that led to the country’s collapse find many parallels in Latin America.

The highlights this week: The links between the crises in Afghanistan and Haiti, new insights into Bolivia’s 2019 political crisis, and surveillance technology quietly extends its regional reach.

The highlights this week: The links between the crises in Afghanistan and Haiti, new insights into Bolivia’s 2019 political crisis, and surveillance technology quietly extends its regional reach.

Most Latin American governments offered little official support to the U.S. War in Afghanistan when it began in 2001. At the time, Venezuela put forward a blistering critique of meeting “terror with more terror,” and then-Cuban leader Fidel Castro said U.S. opponents’ irregular warfare abilities could draw out the conflict for 20 years.

Over the weekend, as the Afghan government collapsed and chaos engulfed Kabul’s airport, today’s leaders of Cuba and Venezuela echoed their critiques while foreign ministers of other Latin American countries diplomatically issued statements of concern about Afghanistan’s humanitarian needs. Chile and Mexico made plans to accept Afghan refugees, and several countries signed on to a joint international statement protecting Afghan women’s rights.

To many in Latin America’s diplomatic and foreign-policy communities, the dark events in Afghanistan confirmed the importance of the principle of non-interference in other countries’ internal affairs.

Non-interference is a common tenet of Latin American countries’ foreign policies that has grown stronger since the Cold War, when Washington supported several right-wing military regimes in the region. In the post-Cold War era, many Latin American countries have aimed to preserve a position of nonalignment with any major power bloc, even as some fellow proponents of the strategy—such as India and Egypt—have changed course.

The extended U.S. presence in Afghanistan was “the same mistake as always: trying to build democratic states through the use of force,” Colombian political scientist Sandra Guzmán wrote in El Tiempo.

In Brazil, “it’s difficult to find supporters of the prolonged occupation of Afghanistan, even when justifying it by defending values like democracy and human rights,” political scientist Guilherme Casarões of the Getúlio Vargas Foundation told Foreign Policy.

Observers in Latin America also drew lessons for several of their region’s own challenges.

Human rights. Many Latin Americans stressed that methods other than military interventions should be used to work toward human rights, even as they acknowledged how challenging it can be to make progress. “Self-determination 1, human rights 0 #Afghanistan,” tweeted Uruguayan political scientist Andrés Malamud after Kabul fell.

Within Latin America itself, some leftist leaders have cited the principle of non-intervention to avoid criticizing their ideological allies for human rights violations in recent years, including in Venezuela, Cuba, and Nicaragua. On Aug. 18, Argentine journalist Jordana Timerman called for an end to such silence in the New York Times. She noted that recent multilateral talks on Venezuela’s crisis and comments by former Brazilian President Luiz Inácio Lula da Silva criticizing human rights violations in Nicaragua are preliminary signs the tide may be changing.

The war on drugs. The Taliban takeover wasn’t the United States’ only defeat in Afghanistan. Washington’s yearslong U.S. campaign to rid the country of its opium and heroin trade also proved ineffective, amounting to another definitive loss in the war on drugs, Colombian political scientist Beatriz Miranda wrote in El Espectador. Reuters reported the United States spent more than $8 billion in drug eradication efforts in Afghanistan over 15 years.

Puppet presidents. Erstwhile, Afghan President Ashraf Ghani presided over a U.S.-friendly government that went up in smoke and corruption last week. Warning against the corrosive effects of such U.S. sponsorship of corrupt local leaders, analyst James Bosworth at the Latin America Risk Report asks if Honduran President Juan Orlando Hernández is the country’s own Ghani. Hernández is reportedly linked to drug traffickers, and Washington has been hesitant to investigate his alleged corruption.

Not failed states but “aid states.” To Colombian political scientist Gustavo Wilches-Chaux, Afghanistan has many parallels to Haiti, where after years of outside military and humanitarian intervention costing billions of dollars, “both countries lack states and communities capable of managing crises that permanently affect them with relative autonomy.”

This reality is tragically visible as Haiti—already embroiled in political crisis after the July 7 assassination of then-Haitian President Jovenel Moïse—struggles to recover from an earthquake and tropical storm that killed more than 2,000 people. The government’s ability to carry out rescue efforts and provide medical aid has proved woefully inadequate, with Haitians digging bodies from the rubble with their own hands.

Theoretically, the billions of dollars in aid money that were pledged after an earthquake in 2010 should have improved the Haitian government’s capacity to respond to future disasters. But investigations found big aid organizations, such as the American Red Cross, carried out poorly managed projects and spent much of the money they raised in questionable ways.

This time, Haitians have urged donors to give directly to local and Haitian-led organizations, bypassing international intermediaries. In a small sign of change, former U.S. President Barack Obama has joined this chorus. Latin American countries have sent aid workers, supplies, and funds to the country and are due to discuss earthquake relief at a session of the Organization of American States on Friday.

Tuesday, Aug. 31: The U.N. Environmental Program begins a regional roundtable on sustainable finance in Latin America and the Caribbean. 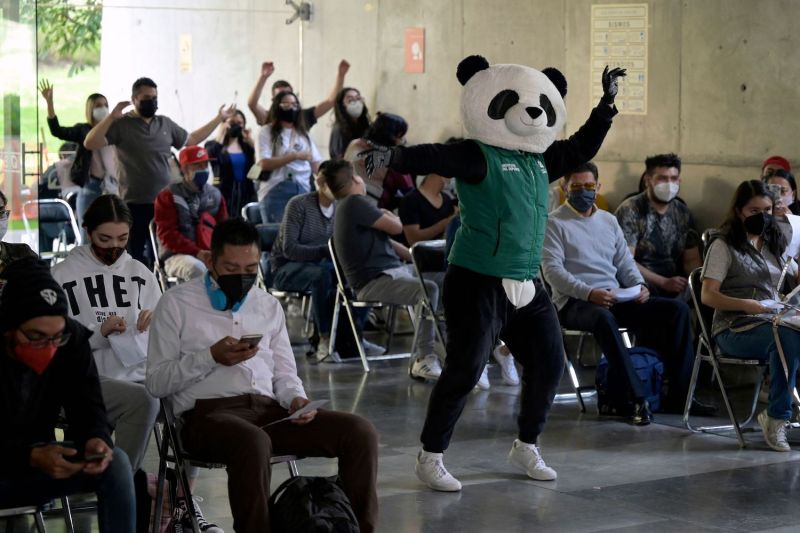 A local government employee disguised as a panda called “Pandemio” performs an exercise routine for people who have already received a first dose of the AstraZeneca vaccine against COVID-19 in Mexico City on Aug. 10.ALFREDO ESTRELLA/AFP via Getty Images

Vaccine take-up. Daily COVID-19 vaccination rates in some Latin American countries have outpaced those in the United States, with Brazil surpassing the United States in the share of adults with one vaccine dose. (Earlier this week, the shares were 73 percent and 71 percent, respectively, according to government figures.) As vaccine shipments continue to arrive in the region, Latin America’s increasingly high jab rate is complemented by a low rate of vaccine hesitancy.

Deportation flights. Mexico and the United States have been cooperating to fly thousands of undocumented migrants from the U.S. southern border to Mexico’s southern border, where officials forced some individuals to cross into Guatemala. Such expulsion flights are due to occur 24 times per month from now on, the Associated Press reported. The Migration Policy Institute’s Andrew Selee told El Universal the Biden administration is entering a new phase of hardening its migration policies after initial messaging suggested they would be more open.

Surveillance tech. In recent years, facial recognition and other surveillance technology has quietly and massively expanded in Latin America. A new study notes it happened without much public resistance due to the discounts and freebies offered by tech companies—particularly Chinese and Israeli ones, Rest of World reports.

A pepper’s migrant journey. A new scientific paper uses plant gene banks to look at how the species of pepper that includes cayenne and jalapeño, the Capsicum annuum, traveled around the world from its original home in Mesoamerica and South America during and after the Columbian Exchange. Portuguese trade routes, which also included the Portuguese slave trade, are likely responsible for the similarities in peppers found today in Africa and South America, the researchers wrote.

Which sports star wore a face mask with the Haitian flag this week in support of earthquake relief efforts?

Osaka, who is Haitian on her father’s side, pledged to donate any prize earnings from the Western & Southern Open in Cincinnati this week to earthquake relief efforts. 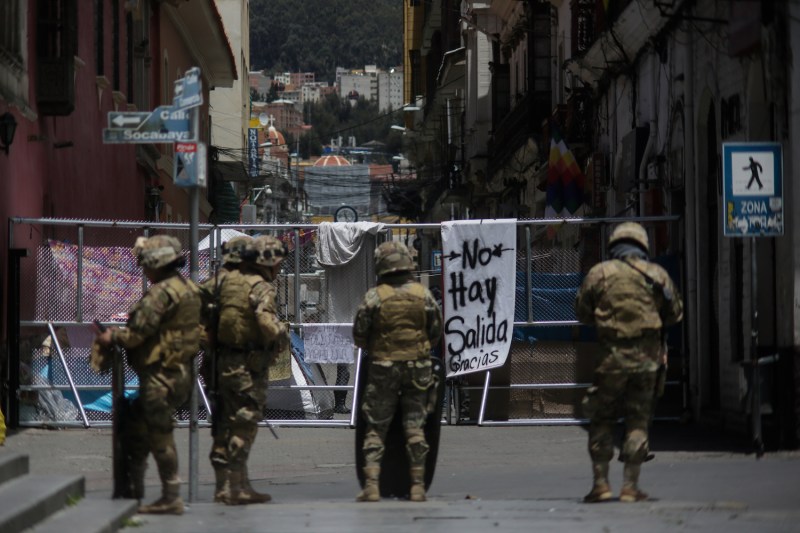 Military officers stand next to a barricade in Plaza Murillo in La Paz, Bolivia, on Nov. 24, 2019.Gaston Britto Miserocchi/Getty Images

This week, a group of human rights experts commissioned by the Organization of American States released a report on Bolivia’s November 2019 political crisis, in which former Bolivian President Evo Morales fled the country in the wake of a disputed election and widespread public protest. At the time, Morales claimed a coup was underway against him, and Bolivian society today remains bitterly divided between those who share Morales’s view and those who claim he oversaw electoral fraud in his favor.

The accounting. The report did not rule on the question of whether the events of November 2019 amounted to a coup but detailed human rights violations ranging from sexual violence to the killings of demonstrators that occurred around that time.

Government authorities under Morales abetted protesters who had announced their intent to use violence, noting the state did not investigate or sanction those responsible, the report said. It also found that security forces under the post-Morales interim government led by then-President Jeanine Áñez carried out summary executions of protesters. The researchers noted racism played a significant role in the violence under both leaders.

How to move forward. Bolivian President Luis Arce, who took office in November 2020 and hails from Morales’s Movement for Socialism (MAS) party, said the government would launch a reparations committee and called for Áñez to be tried.

The report stands as an important tool for helping litigate Bolivia’s crisis. One of its own findings points to why doing so is so difficult: the widespread lack of independence in Bolivia’s judicial system. Journalist Nancy Vacaflor said the report should prompt several resignations in the justice system, but “we know they’re not batting an eyelash.”

Still, many suggested civilians should use the report as their own public litigation tool. Sociologist Jorge Derpic tweeted the report shows the importance of condemning indirect state violence—in this case, linked to the MAS government—as well as more overt atrocities.

You are commenting as . Change your username | Log out
Tags: Afghanistan, Haiti, Military

NEW FOR SUBSCRIBERS: Want to read more on this topic or region? Click + to receive email alerts when new stories are published on Military, Afghanistan