The United States Keeps Doing What It Can’t

The main lesson from the failed intervention in Afghanistan is about the dangers of self-delusion. Will anyone learn it? 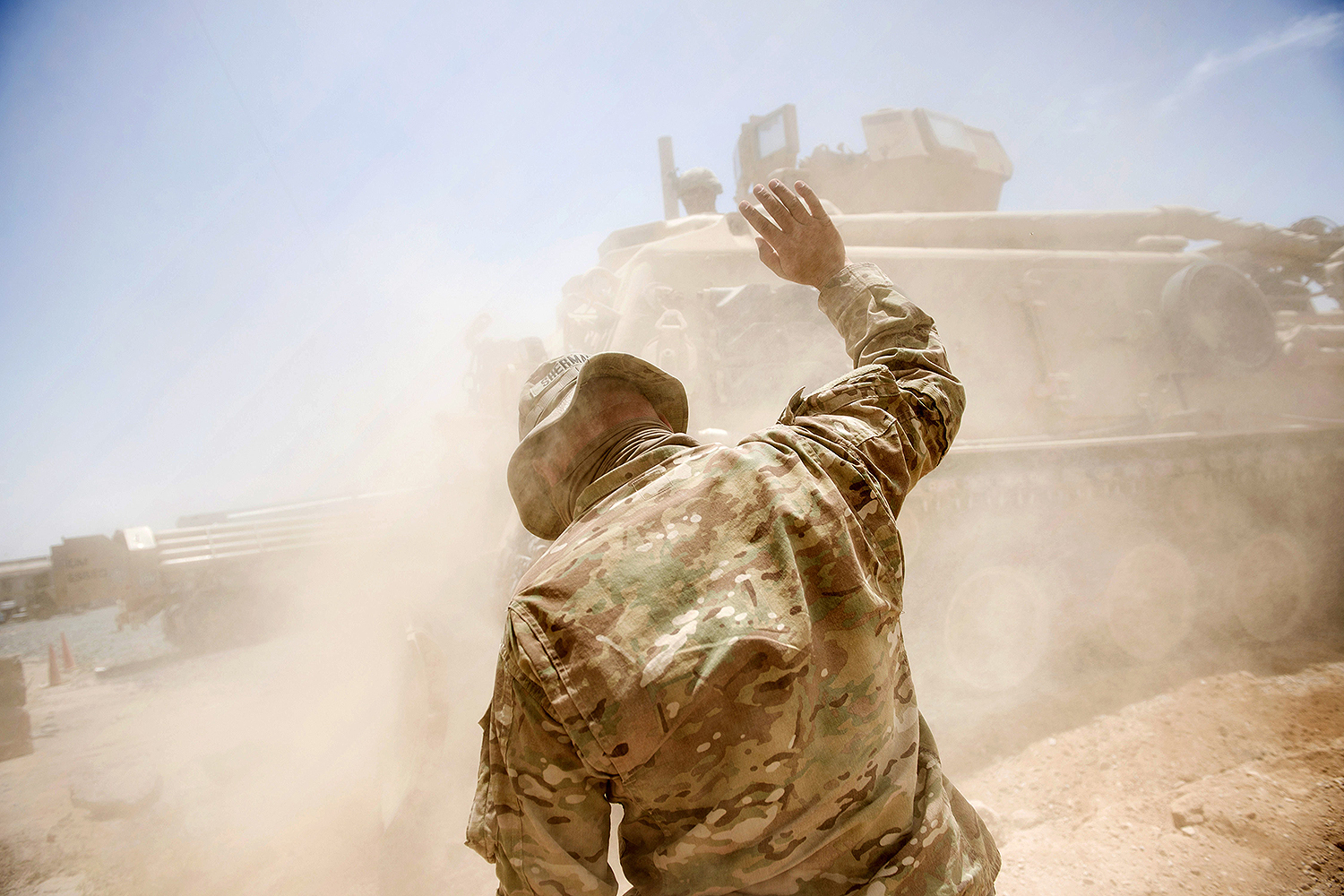 U.S. Army soldiers use an M-88 recovery vehicle to demolish Hesco barriers as troops prepare for the withdrawal from Forward Operating Base Pasab in Kandahar province, Afghanistan, on June 2, 2014. BRENDAN SMIALOWSKI/AFP via Getty Images

We only learn through suffering. Americans have experienced a spasm of shame as they have witnessed the whirlwind collapse of Afghanistan in the aftermath of American military withdrawal. Right now, we are obsessed with the question of whether U.S. President Joe Biden could have mitigated the suffering of the Afghan people at the hands of the Taliban if he had withdrawn those troops more slowly or differently. That’s an important matter. But the more fundamental question is: What should we learn from the failure of an enterprise into which the United States has poured so much life, money, and time?

U.S. Army soldiers use an M-88 recovery vehicle to demolish Hesco barriers as troops prepare for the withdrawal from Forward Operating Base Pasab in Kandahar province, Afghanistan, on June 2, 2014. BRENDAN SMIALOWSKI/AFP via Getty Images

We only learn through suffering. Americans have experienced a spasm of shame as they have witnessed the whirlwind collapse of Afghanistan in the aftermath of American military withdrawal. Right now, we are obsessed with the question of whether U.S. President Joe Biden could have mitigated the suffering of the Afghan people at the hands of the Taliban if he had withdrawn those troops more slowly or differently. That’s an important matter. But the more fundamental question is: What should we learn from the failure of an enterprise into which the United States has poured so much life, money, and time?

We need to first recognize a point about lessons. Any lesson drawn from political failure will itself be political, which is to say that it will be used in the service of some other argument. Then-Chairman of the Joint Chiefs of Staff Colin Powell applied the alleged lessons of the Vietnam War—don’t intervene without a clear plan to win, without a clear exit, without clear public support—to oppose a radically different proposed intervention in the Balkans in 1993. Powell used his ownership of those lessons, as the senior military figure in the administration of President Bill Clinton, to prevent a use of force he considered unnecessary. We should be sorry that he succeeded.

Afghanistan is, of course, the prime example of the forever war that it has now become almost obligatory to deplore. America’s utter inability to fashion a decent, effective Afghan state after 20 years will be taken by many on the left as proof that the United States only makes things worse wherever it exercises its blundering dominion, and by realists on the right to demonstrate the folly of pursuing good in failed states. But we need to ask exactly what it is that failed in Afghanistan and whether that failure is particular to “the graveyard of empires,” as some have dubbed Afghanistan, where all great imperial designs have come to grief, or whether that failure can be attributed to a generalizable principle.

Here I recommend the recently published American War in Afghanistan, a sweeping history of the 20-year encounter between Americans and Afghans by Carter Malkasian, a Pashto-speaking former Defense and State Department official with long experience in Afghanistan. Malkasian is drawn to two conflicting, but not irreconcilable, themes: American officials made a series of colossal errors that continually frustrated their own goals, and the Taliban probably would have returned to power even if the foreigners had gotten things right. Perhaps both are true.

The list of missed opportunities is long. The administration of George W. Bush refused to include the Taliban in the November 2001 talks to forge a new government in Afghanistan; Then-Defense Secretary Donald Rumsfeld refused to pay for an army big enough and effective enough to stand up to the Taliban resurgence in 2005; President Barack Obama authorized a counterinsurgency strategy in 2009 that failed on its own terms while greatly increasing the tempo of killing; an impatient President Donald Trump cut a lousy deal with the Taliban in 2020. Malkasian perhaps dwells too little on yet another epic failure: the corrupting effect of the mighty American spigot of dollars.

A Non-Interventionist Region Reacts to Afghanistan

The factors that led to the country’s collapse find many parallels in Latin America.

Malkasian states in closing that American officials should have had the “forethought” to recognize when preconceptions about their own capacities, those of their host government, or of their adversary proved illusory. Yes, they should. But one can hardly think of a more piercing lesson from Vietnam, where Americans overestimated the staying power of the Saigon regime and underestimated the resilience of the Viet Cong. American optimism—or imperial hubris—appears to be quite literally bulletproof. It may not be in Americans’ nature to know better, for most lack the patience as well as the stomach for imperial adventures. Only the rare American abroad will attain the fine-grained knowledge required to distinguish the good warlord from the bad.

Malkasian argues that while wiser policy could have led to an earlier exit and much less bloodshed, it probably could not have led to victory. This is so in part because the Afghan government commanded little or no loyalty from its own people, and the Afghan army was hopelessly fragmented and poorly commanded, as we have now seen all too vividly. But Malkasian also shows that the Taliban persisted despite the American onslaught because they were extraordinarily resilient, patient, and resourceful, and far more willing than their adversaries to die and kill. The real key to the war is that despite their brutality the Taliban drew on a deep well of popular support because “they fought for Islam and resistance to occupation, values enshrined in Afghan identity.”

Other experts have deprecated this claim of religious identification. But it still may be true that the outcome was foretold from the start, and thus that it was a war best not fought. If we go back and ask what we would have done if we knew then what we know now, the answer may be that Bush would have pushed Mullah Mohammad Omar, the Taliban’s leader, harder than he did to turn over Osama bin Laden, and thus avoid a war altogether—even though this would have left the nation under the Taliban’s medieval despotism. Second best would have been giving the Taliban a place in the government of then-President Hamid Karzai. Third best would have been forgoing counterinsurgency for a more limited counterterrorism policy in 2009. Instead, as Malkasian mordantly puts it, “We resuscitated a state of civil war so that we could sleep a little better at night.” 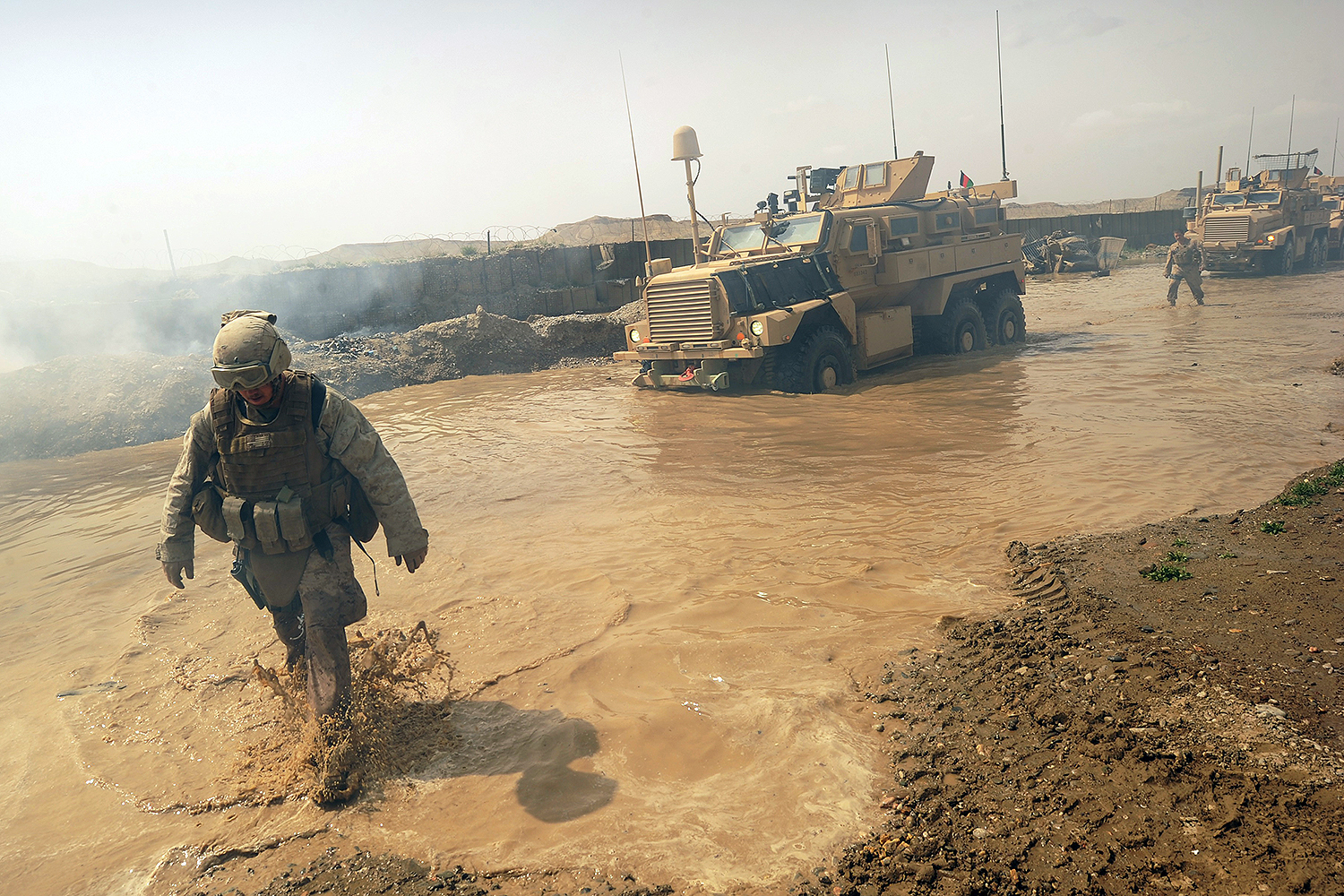 U.S. soldiers return to Camp Phoenix from a patrol near the town of Musa Qala in Helmand province in southern Afghanistan on April 11, 2011. PETER PARKS/AFP via Getty Images

The lesson of Afghanistan is thus not that the United States is uniquely maladroit, much less malevolent. Rather, it is that the United States keeps insisting that it must do that which it cannot do. Because Americans say that they must do it, they persuade themselves that they can do it, whether it is rolling back communism in Southeast Asia or conquering sectarian hatred in Iraq or installing good government in Afghanistan. Forethought, to use Malkasian’s term, should mean recognizing that the United States does not, in fact, have to do that which cannot be done. It can bend circumstances to its advantage, but it cannot remake the circumstances themselves.

And so, yes, no more forever wars. In its long wars, where the exit strategy requires leaving behind a legitimate and self-sustaining government, the United States only protracts its own suffering and, far more, that of the host people. But what else? Will American policymakers draw from Afghanistan the lesson that they should stick to great-power competition, a game they have been playing for much of the last century, and stop meddling in weak, troublesome countries, a preoccupation of the post-Cold War era?

That’s a pipe dream. The world is not a chessboard with China or Russia playing black and Washington and its allies playing white; rogue players like the Taliban keep intruding. Maybe tomorrow’s threat will come not from Islamist extremists but from state-backed hackers vowing to bring America’s infrastructure to a grinding halt, or from a despot who gets hold of biological weapons. What if, God forbid, the United States had to invade Iran? Bush really had no choice but to invade Afghanistan once Mullah Omar refused to turn over bin Laden. The question for the future is what the United States should do once it succeeds in eliminating such a threat.

Afghanistan mostly provides us with negative answers to that question. But there are alternative paths. The United Nations is one such path, as the former Afghanistan diplomat James Dobbins argued in America’s Role in Nation-Building: From Germany to Iraq. There are diplomatic off-ramps that can make an intervention self-limiting. Perhaps we should even consider the bitter wisdom of Jacqueline Hazelton, a scholar at the Naval War College who recently wrotethat counterinsurgencies succeed not by installing legitimate government but by co-opting rival elites, abusing human rights, and imposing tight military control on civilian populations.

You can understand why many Britons were happy to hand off the imperial burden to the United States after World War II. An increasing number of Americans feel the same sense of exhaustion. But only China is waiting in the wings. The United States will have to keep blundering—and trying to benefit from painful lessons—for the foreseeable future.

James Traub is a columnist at Foreign Policy, nonresident fellow at New York University’s Center on International Cooperation, and author of the book What Was Liberalism? The Past, Present and Promise of A Noble Idea.

NEW FOR SUBSCRIBERS: Want to read more on this topic or region? Click + to receive email alerts when new stories are published on U.S. Foreign Policy, Afghanistan

Another Win for China’s Hostage Diplomacy