Beijing’s emphasis on sharing the wealth seems to cloak another attack on the rich—party leadership excluded.

The highlights this week: Chinese President Xi Jinping’s recent rhetoric about “common prosperity” portends a new attack on the rich, what the fall of Kabul means for Beijing, and the giant panda finally loses its endangered status.

The highlights this week: Chinese President Xi Jinping’s recent rhetoric about “common prosperity” portends a new attack on the rich, what the fall of Kabul means for Beijing, and the giant panda finally loses its endangered status.

In an Aug. 17 speech, Chinese President Xi Jinping called for “common prosperity,” signaling what appears to be a new attack on China’s richest businesspeople. The rhetoric follows regulatory assaults on numerous sectors in the last year, especially technology. Xi’s speech emphasized a need to “regulate excessively high-income groups” and said that businesses should return more of their profits to society.

Xi’s rhetoric has prompted big firms to scramble to demonstrate their party loyalty and social commitments. The delivery giant Pinduoduo, for example, pledged to donate $1.5 billion in earnings to charity. The move prompted its shares to jump by 22 percent—on the assumption that it demonstrated both willingness to go along with the Chinese Communist Party (CCP) and that Pinduoduo had the money to do so.

But charitable donations by companies must be considered in light of laws that require Chinese nongovernmental organizations to be supervised by CCP authorities. As a result, private charities have reshaped themselves to appear less activist, including dividing themselves into smaller groups that deal with individual issues. Many of them formed in the first place because official charities, such as China’s Red Cross, tend to be corrupt.

Yet any attempts to reduce inequality are welcome news in China. According to World Bank data, China’s Gini coefficient, calculated to measure inequality, is one of the highest in the world—though still slightly behind the United States. City governments have increasingly pushed out the poor, making inequality less obvious. But under Xi, rural poverty alleviation campaigns have been successful, with significant government support supplementing incomes for the most desperate. The campaigns have been a centerpiece of propaganda.

There’s one big problem with the “common prosperity” rhetoric. CCP leaders and their families are among the richest people in China—a topic that remains taboo. Reporting on wealth within the party is impossible for any Chinese media; even partially covering it resulted in Bloomberg News dismantling its own investigative unit and silencing reporters under pressure from the authorities.

For members of China’s red aristocracy, the problem isn’t billionaires—it’s billionaires they’re not related to. The new rich of the 1980s onward often scrabbled to build connections to powerful families, like the relatives of Gen. Ye Jianying, for exactly this reason. But the churn rate for the Chinese ultrarich has long been high. One study found that appearing on the Hurun Rich List, an index of the wealthy maintained by foreign expert Rupert Hoogewerf, nearly tripled the chances of a businessman being arrested or investigated in the next three years.

What appears different under Xi is the attempt to sell similar moves to the public as a return to equality. That may be trickier than the leadership thinks: After all, they live in gilded palaces, complete with their own special food supplies. How much they’re in touch with the common person remains an open question.

China and Afghanistan. In the wake of the fall of Kabul, Chinese state media has largely gloated over the failure of U.S. power—and threatened that Taiwan will be next. As Blake Herzinger argued in Foreign Policy, that’s a dangerous argument, especially if Beijing starts to believe its own talk. Meanwhile, China is looking toward Afghanistan as a strategic corridor, but it may have its own worries about repeating U.S. mistakes—and about instability spilling over.

The Islamophobia driven by the Chinese government’s crackdown in Xinjiang has also caused some blowback against the idea of working with the Taliban, who visited Beijing for talks in July. In January, Lynne O’Donnell reported for Foreign Policy about how the previous Afghan government was reconsidering relations with Beijing after discovering China worked with the Haqqani network, a prominent terrorist group, to track down Uyghurs inside Afghanistan. The Haqqani network may now be in partial charge of Kabul’’s security.

Another side effect of the Taliban takeover is likely to be Chinese intelligence deepening its already considerable ties with its Pakistani counterparts, which created and supported the Taliban. An understated element of China’s increasing hostility to the United States in the last decade is the increasing influence of Russian and Pakistani intelligence and military officers—two groups inclined toward anti-Western conspiracy theories.

More conspiracy theories. U.S. President Joe Biden received a predictably inconclusive report from the intelligence community this week on the origins of the coronavirus. Largely driven by media coverage of the so-called lab leak theory, the report asked a scientific question that U.S. intelligence is not well equipped to answer. Meanwhile, Beijing doubled down on its counteroffensive, with a nonsensical attempt to blame the U.S. military for creating COVID-19. (I get no indication that Chinese officials actually believe the theory themselves.)

None of this tells us much about what the Chinese leadership knows about the origins of the coronavirus. Ultimately, the motivating forces remain the same—domestic kudos for officials who see anti-Americanism as winning political ticket and the Beijing’s instinct to cover things up. One thing is certain: COVID-19 and its origins will remain a long-term wound in Beijing’s relationship with the world. 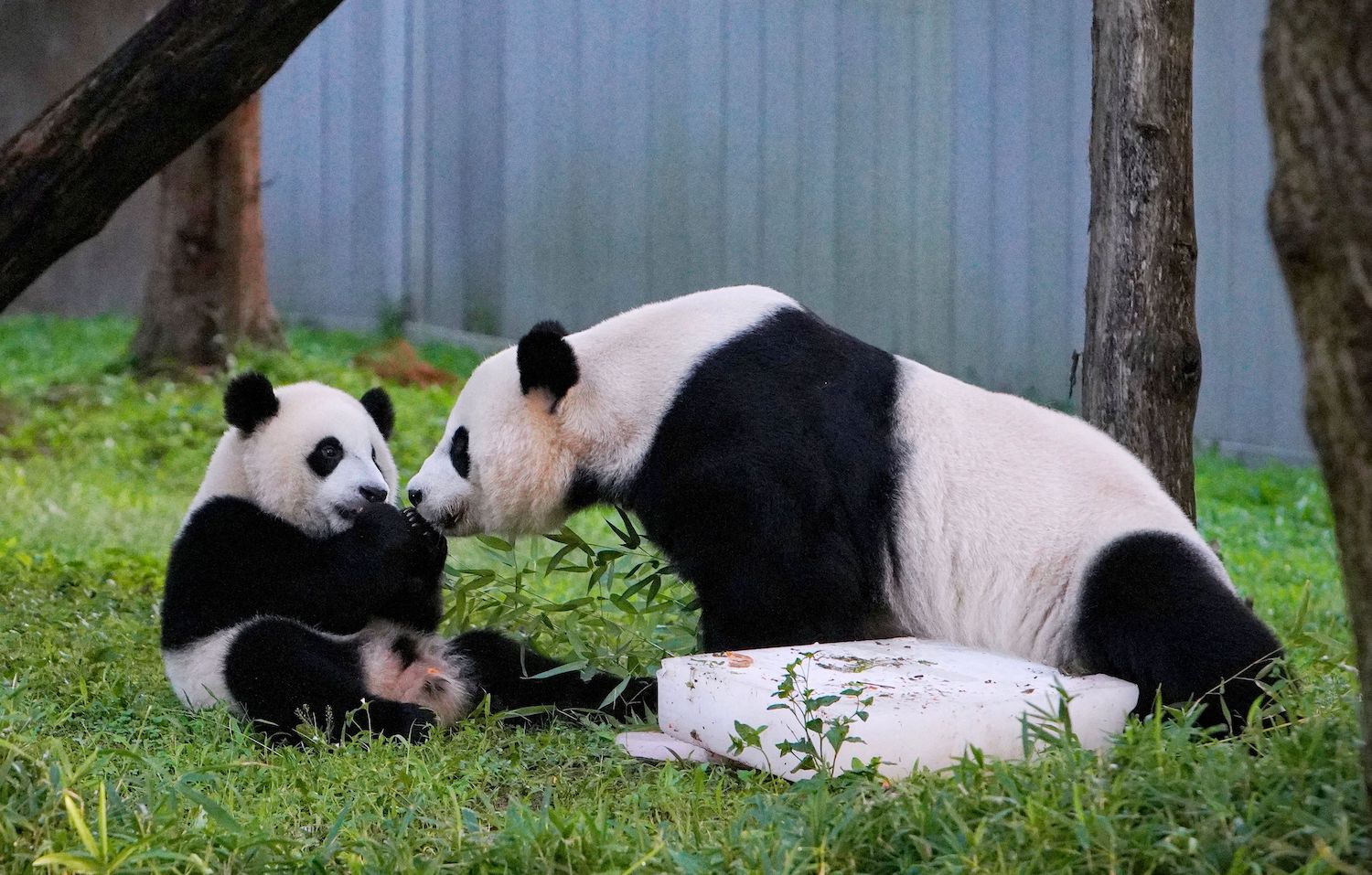 Good news for panda huggers. China’s Ministry of the Environment announced last month that the giant panda, an animal now synonymous with Chinese diplomacy, is no longer endangered but merely vulnerable. Historically, pandas were not a particularly important animal in China, but a surge of interest in the 1950s prompted the creation of the country’s first national reserves. The realization in the 1970s that a cuddly animal was a useful tool on the global stage prompted so-called panda diplomacy, including the donation of animals to the United States.

The adoption of the panda as the World Wildlife Fund’s symbol in 1961 aided this effort, creating a long-term relationship between the conservation giant and Beijing that has recently been shaken by the NGO laws. The organization’s original choice was largely motivated by pandas being black and white, helping to save on printing costs.

Hangzhou purges. The eye of the Central Commission for Discipline Inspection, the CCP’s disciplinary body, has fallen on officials in the city of Hangzhou in another of the anti-corruption purges that are a regular feature of Xi’s rule. Zhou Jiangyong, the city’s party chief, has been detained—the first step toward his inevitable conviction on corruption charges. As many as 25,000 other officials in Hangzhou may face punishments.

Those charged are very likely guilty. As ever, the question is whether they’re any more guilty than any other official at their level. Anti-corruption campaigns and political opportunism go hand in hand, as does the divvying up of assets afterward. In that regard, Hangzhou is a particularly ripe plum: It’s the home of tech giant Alibaba, once a shining gem of the city and now a useful political target.

Private education reels. After a temporary rebound, Chinese tech stocks retreated on Wednesday, remaining down this year amid regulators’ assault on the sector. China’s once-giant private education sector, which attempted to remake itself as part of the tech sector as a sell to investors, continues to shudder with the impact of the regulations introduced last month. As the big private education firms attempt to switch back to adult education or extracurriculars, smaller ones are falling like dominos.

Furthermore, the contracts of thousands of teachers overseas—who are now banned—have been canceled, and Chinese employees are going unpaid. Richer parents are scrambling to find a solution, such as paying foreign companies directly for online classes, rather than Chinese ones.

A second chance for #MeToo. Hunan TV, a provincial station that is a powerhouse in Chinese entertainment, has rapidly cut off ties with celebrity host Qian Feng, who was recently accused online of rape. As with the Kris Wu case weeks ago, the Chinese authorities’ determination to rein in fan culture and the entertainment industry has created an unusual space for #MeToo allegations, as has the crackdown on big tech, which also has endemic sexism issues. Accusers who likely would have been censored last year are now getting more of a hearing.

While the trend is encouraging for China’s women, active feminist groups continue to face trouble from the authorities both on and offline.

Pinduoduo has been the hottest company in Chinese tech for a couple of years, but, unlike its competitor Alibaba, it has very little presence in the West. The company started off as an agriculture-focused e-commerce platform following a failed lychee venture by its founder, ex-Google engineer Colin Huang. Pinduoduo connects small farms with urban customers—a niche in China, where quality is often highly variable.

Pinduoduo’s efforts at delivering farm-fresh food to consumers were very successful—and even more so its efforts at creating a cheery social image, complete with farming games (think of FarmVille or Stardew Valley) and the innovation of team purchases allowing individual buyers to come together for group orders.

Since launching in January 2016, Pinduoduo has expanded to over 560 million buyers—helped by its close integration with messaging app WeChat. (WeChat’s parent company, Tencent, invested heavily in Pinduoduo.) It has specialized in cheap, low-cost goods with high turnover that keep users coming back. But the close integration with WeChat also made it vulnerable to new regulations, even as its sales swelled during the COVID-19 lockdowns in 2020.

Breaking up monopoly platforms is one of the government’s stated objectives. Pinduoduo stock fell sharply earlier this year as a result, although it’s bounced back with the company’s pledge to the new order of “common prosperity.”

Update, Aug. 26, 2021: This article has been updated to clarify the Haqqani network’s role in Kabul.

You are commenting as . Change your username | Log out
Tags: Business, China, Xi Jinping