For months, the message from the White House has been clear: The U.S. military is no longer needed in Afghanistan because the country is no longer a safe haven for terrorists who could strike the United States.

But on Thursday, that vision was shattered when two blasts rocked the ground near the Kabul airport, reportedly killing 12 U.S. service members and leaving scores of additional Afghan casualties in their wake. For officials and observers—many of whom had been working nearly around the clock to safely evacuate thousands of Americans and Afghan allies—it confirmed their worst fears: Afghanistan could once again become a haven for terrorism.

In the first instance, a suicide bomber detonated a vest near Abbey Gate at Hamid Karzai International Airport, killing or wounding four or more U.S. personnel, according to a State Department alert obtained by SitRep. Another blast occurred at the Baron Hotel, just a few steps from the airport. Local reports attributed to the Taliban indicated the blast left over 40 people dead and more than 100 injured.

We’re still waiting for a final update on the casualty toll—and on whether Afghanistan’s Islamic State franchise is responsible, as some U.S. officials suspect. But as U.S. troops welded the gates to the airport shut after the attack, there were fears that the security threat could further hamper the evacuation, which had already been impeded by scores of Taliban checkpoints that sprouted up around Kabul in recent days.

The Taliban condemned the attacks in a statement on Thursday. But that wasn’t enough for many lawmakers skeptical of where Afghanistan is heading after the U.S. withdrawal. “As we wait for more details to come in, one thing is clear: We can’t trust the Taliban with Americans’ security,” Sen. Bob Menendez, chair of the Senate Foreign Relations Committee, said in a statement after the attacks on Thursday.

President Joe Biden announced Thomas Barrett, the current mayor of Milwaukee, as his nominee to be ambassador to Luxembourg.

Carla Koppell is Biden’s nominee to be assistant administrator for development, democracy, and innovation at the U.S. Agency for International Development.

Elizabeth Allen has been appointed as assistant secretary of state for global public affairs.

Bidding war. Vice President Kamala Harris is in East Asia this week wooing allies for some good old-fashioned geopolitical competition with China. But Beijing had a few jabs of its own. Harris had a three-hour delay en route to Vietnam (due to a possible “Havana syndrome” incident), where she was to pledge a donation of 1 million coronavirus vaccines. That’s when China made its move.

As Reuters reports, China quickly dispatched its own ambassador in Vietnam to pledge a donation of 2 million vaccines. The Vietnamese government, meanwhile, reiterated that it wasn’t picking sides in the U.S.-China competition.

Oh, hot JDAM. The State Department approved a potential sale of $258 million worth of precision-guided munitions to South Korea on Wednesday, including thousands of Joint Direct Attack Munition (JDAM) guidance kits, among other munitions and logistical support.

The proposed sale will improve South Korea’s ability “to meet current and future threats by increasing available stores of munitions on the Korean Peninsula,” the U.S. Defense Security Cooperation Agency said in a statement. In government press release speak, that basically means stocking up for any potential armed conflict with North Korea.

More planes, please. Israeli Prime Minister Naftali Bennett is scheduled to meet with Biden in Washington for the first time on Thursday. During the meeting, he is expected to ask Biden to approve military aid for the Israelis to purchase up to 25 additional advanced versions of the F-15IA fighter jet, as Breaking Defense reports.

The request likely reflects growing concern among Israeli defense planners about future potential military standoffs with Iran’s new hard-line government. The meeting is currently on hold after the multiple blasts in Afghanistan. 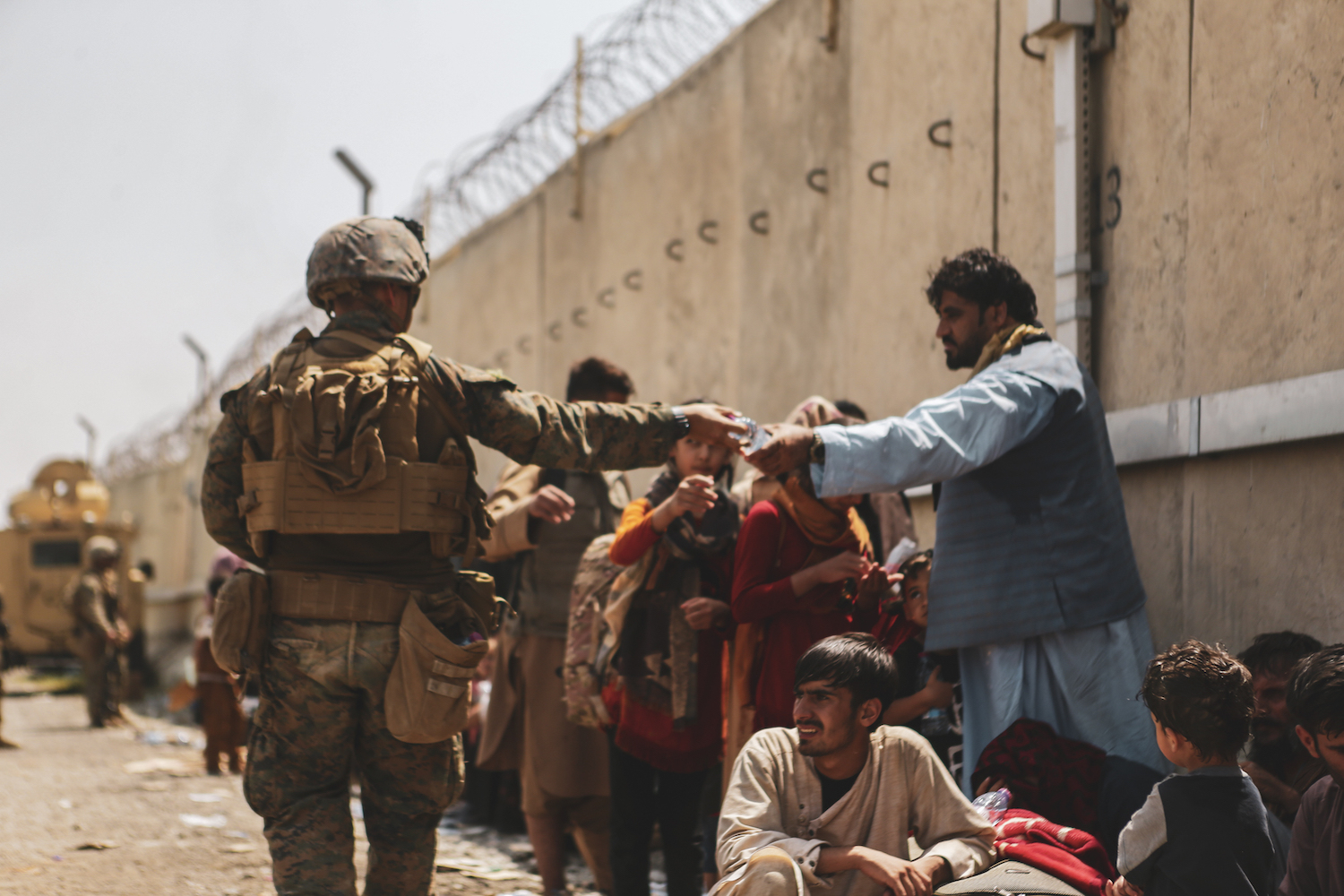 A U.S. Marine with the 24th Marine Expeditionary Unit passes out water to evacuees at Hamid Karzai International Airport in Kabul on Aug. 21.Isaiah Campbell/U.S. Marine Corps via Getty Images

Aug. 28-29: Iraq is expected to host a regional summit to ease Saudi-Iran tensions, with leaders from Egypt, Jordan, Turkey, and France also invited to attend.

Aug. 30: Ukrainian President Volodymyr Zelensky is scheduled to visit Washington and meet with Biden at the White House.

Dating tips from the U.S. Army. Tired of dating jerks? There’s a U.S. Army powerpoint somewhere that’s ready to help. Per the Army, soldiers with the V Corps had a chaplain-led retreat this month with the theme “How to Avoid Falling in Love With a Jerk.” Probably some sage advice in there for us all, really.

You are commenting as . Change your username | Log out
Tags: Afghanistan, Middle East and North Africa, Security, War

NEW FOR SUBSCRIBERS: Want to read more on this topic or region? Click + to receive email alerts when new stories are published on Security, Middle East and North Africa, Afghanistan