Reconciliation and vaccination have earned Guillermo Lasso a 73 percent approval rating. Can it last?

Both Peru and neighboring Ecuador have new presidents: Peru’s Pedro Castillo was inaugurated a month ago while Ecuador’s Guillermo Lasso came to office two months before him. Although Castillo is already on thin ice—his foreign minister flamed out in controversy last week—Lasso has managed to stay popular despite only a sliver of congress being held by his party. His rise may offer lessons about effective leadership in polarizing times.

The conservative Lasso earned less than 20 percent of valid votes in February’s first-round election, and his party, Creating Opportunities, holds only 9 percent of legislative seats. But Lasso is nearing the 100-day mark of his presidency with a towering 73.5 percent approval rating, one of the region’s highest.

Much of this is due to a dramatic ramp-up in COVID-19 vaccinations. Over the course of just two months, the share of Ecuadorians fully vaccinated against the virus has jumped from 7 to 40 percent.

Aside from the pandemic, Lasso has also been careful to reach out to different ideological camps—both inside Ecuador and through diplomacy with other world leaders—and has taken conciliatory positions on several key issues. A poll conducted by Cedatos in early August found 78.4 percent of Ecuadorians thought his way of governing was “good or very good.”

It is a strategy that may yet differentiate Lasso from his contemporary right-wing leaders in Latin America’s big economies, who have shown unwillingness to compromise in recent moments of social discontent. Colombian President Iván Duque Márquez has a 67 percent disapproval rating, Chilean President Sebastián Piñera’s disapproval stands at 68 percent, and that of Brazilian President Jair Bolsonaro—whose caustic spurning of opponents and democratic institutions from day one puts him in a category of his own—is at 64 percent.

As Lasso begins to introduce the weightier elements of his center-right economic agenda in the coming weeks and months, his conciliatory approach—and high approval rating—will be put to the test.

Olive branches. Lasso is a member of conservative Catholic group Opus Dei, and in 2019, he campaigned against legalizing abortion in the case of rape in Ecuador. But when the country’s top court ruled in favor of legalization in April, Lasso said he would support the decision—which still needs to be codified via legislation.

Lasso backed a lawmaker from Indigenous party Pachakutik Plurinational Unity Movement-New Country in her successful candidacy for presidency of Congress, a noteworthy move given that pro-business and Indigenous agendas have historically not aligned in Ecuador. His government has also pledged to make Ecuador’s upcoming tax reform weigh heaviest on the rich, likely with an eye to the mass unrest sparked in Colombia by a tax bill seen as regressive, which was introduced earlier this year.

Internationally, Lasso visited leftist Mexican President Andrés Manuel López Obrador this week, where he sought a bilateral trade deal that will pave the way for Ecuador to enter the Pacific Alliance trade bloc and expand trade with Asia. He helped finalize an Aug. 11 agreement that allows citizens of Ecuador, Colombia, Bolivia, and Peru to live and work in any of the four countries without needing a special sponsorship. And Lasso is studying the possibility of opening a plant to produce Russia’s Sputnik COVID-19 shot in Ecuador.

But they are sure to object to parts of Lasso’s economic agenda, which includes the privatization of state resources in the oil sector, expansions in mining, and labor reform. Meanwhile, the growing influence of Indigenous groups will likely push the government toward accepting new requirements that extractive industries consult with local groups before launching new projects.

Ecuador’s Indigenous activists have proved their political capabilities in recent years. In 2019, they staged such large-scale demonstrations that Lasso’s predecessor, Lenín Moreno, was forced to relocate the country’s seat of government from Quito to the coastal city of Guayaquil. Earlier this year, they blocked Arauz’s election. And the Confederation of Indigenous Nationalities of Ecuador recently held a protest against Lasso’s move to unfreeze fuel prices, though Pachakutik’s congressional leadership did not insist on blocking the measure.

It remains to be seen whether Lasso’s capacity for dialogue will prevent 2019-style protests. Most importantly, it is unclear how outreach might remedy a scenario where only 32 percent of the active labor force is working full time and earning at least the minimum wage. (Before the pandemic, this rate stood at 39 percent.) Lack of work is Ecuadorians’ number one concern, according to Cedatos.

Wednesday, Sept. 1: The Organization for Economic Cooperation and Development is set to launch its annual outlook on migration.

Gang-government talks. El Faro published details from a probe conducted by El Salvador’s former attorney general about prison negotiations that occurred between members of El Salvador’s three main gangs and government representatives in 2020. Audio files suggest the gangs agreed to reduce homicides in exchange for demands that may have included ceasing large-scale anti-gang police operations, changing prison protocols, and providing employment opportunities. The full scope of the agreement is unknown.

Salvadoran President Nayib Bukele has previously denied that any such negotiations took place, and his government likewise denied the new report. On May 1, a new legislature controlled by Bukele’s party removed the attorney general responsible for the probe.

Local vaccine production. Vaccine makers Pfizer and BioNTech announced they will partner with Brazilian pharma company Eurofarma, which will fill and finish COVID-19 vaccines on-site beginning in 2022. Meanwhile, the Pan American Health Organization announced plans for an initiative that will produce mRNA vaccines in Latin America, saying it is in talks to evaluate around 30 different specific proposals.

Temporary truce. As earthquake and flood relief efforts continue in Haiti, influential gang leader Jimmy Chérizier announced a truce has been negotiated between warring gangs to allow aid to move from the capital, Port-au-Prince, to disaster-hit regions in the country’s south. The United Nations said this week that at least $187 million in aid is still needed for immediate emergency responses. 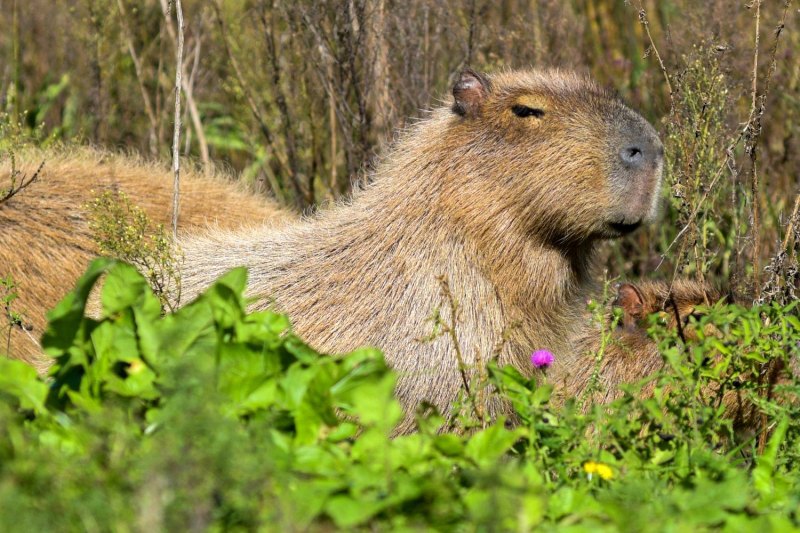 A capybara is seen on the shore of Laguna de los Padres near Mar del Plata, Argentina, on May 8, 2020.MARA SOSTI/AFP via Getty Images

In Argentina’s most famous gated community, an invasion of capybaras has destroyed lawns, bitten dogs, and caused traffic accidents. But the giant rodents have also gained an energetic online fan base of left-wing Argentines, who see them as soldiers in a class war. Which of the following words is not used for capybara in Latin America?

Ronsoco is common in Peru and Chigüire in Venezuela, where the rodent is the namesake to the humor site The Bipolar Capybara.

In Focus: A ‘Remain in Mexico’ Revival? 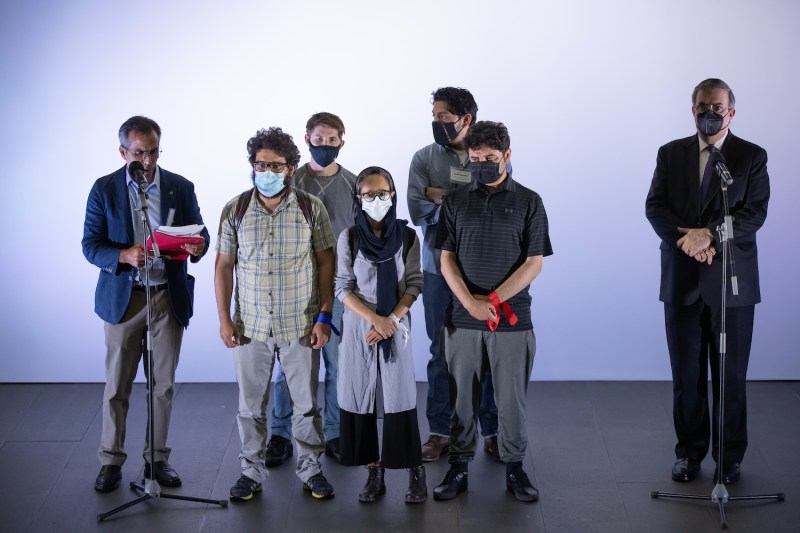 Michael Slackman, a New York Times journalist, speaks during a press conference to welcome a group of journalists and media correspondents living in Afghanistan, who received humanitarian asylum with their families in Mexico, at Mexico City International Airport on Aug. 25.Hector Vivas/Getty Images

On Tuesday, the U.S. Supreme Court refused to block a Texas court’s ruling that ordered the reinstatement of a controversial immigration program that began in 2019 under then-U.S. President Donald Trump and ended in June by U.S. President Joe Biden. Migrant Protection Protocols (MPP), or “Remain in Mexico” policies, forced thousands of asylum-seekers at the southern U.S. border to wait in Mexico while their asylum cases were adjudicated.

Critics said the program both violated international asylum law and endangered migrants. Some 1,544 people in the program were reportedly raped, murdered, or faced other kinds of attacks while in Mexico.

Will Mexico comply? While the Biden administration says it will appeal the Supreme Court order, it also said it was making steps to reinstate MPP. But the program was a cooperation between the Mexican and U.S. governments, so if Mexico does not agree to accept asylum-seekers this time around, the program cannot logistically be reinstated.

On Thursday, López Obrador responded to a question about the decision, saying Mexico “will always seek to have a good relationship with the United States.” Mexico has cooperated with U.S. immigration policies throughout his administration.

The Biden administration still has another restrictive Trump-era border policy in place: Title 42, which allows U.S. Customs and Border Protection to expel asylum-seekers to Mexico without giving them a court date.

Foreign policy by the courts. The Supreme Court ruling is unusual in that it ruled it was illegal to end a program that had only been created in 2019. Furthermore, tweeted the Bipartisan Policy Center’s Cristobal Ramón, the ruling “essentially allows U.S. states to dictate a foreign country’s migration policy without regards to the foreign policy decisions of the executive, underscoring how these courts fail to grasp that immigration is a full-fledged foreign policy area now.”

“Refugees” vs. “migrants.” Immediately after news of the MPP decision broke, Mexico welcomed a plane full of Afghan New York Times journalists and their families, to whom it had granted temporary humanitarian protection after the United States would not immediately do so.

In an interview with the New York Times, Mexican Foreign Minister Marcelo Ebrard cited a Mexican diplomatic tradition of welcoming refugees. But Mexico is engaged in its own ongoing work to expel Central American migrants at the behest of the United States. When asked about the perceived double standard, Ebrard claimed those deported were economic migrants, not asylum-seekers. Reports suggest there are few to no Mexican government efforts to confirm this assertion.

You are commenting as . Change your username | Log out
Tag: Ecuador
Latest