The last redoubt of resistance against the Taliban is cut off and pleading for foreign assistance.

Welcome to Foreign Policy’s SitRep! With all the trouble in the world, we’re looking forward to a relaxing Labor Day weekend by our beautiful new firepit. Oh, wait.

Here’s what’s on tap for the day: Anti-Taliban resistance pocket braces for new fight, the Brits could be looking for new submarine bases if Scotland declares independence, and more heartburn in U.S. relations with Ukraine.

Welcome to Foreign Policy’s SitRep! With all the trouble in the world, we’re looking forward to a relaxing Labor Day weekend by our beautiful new firepit. Oh, wait.

Here’s what’s on tap for the day: Anti-Taliban resistance pocket braces for new fight, the Brits could be looking for new submarine bases if Scotland declares independence, and more heartburn in U.S. relations with Ukraine.

As the Taliban consolidates control over Kabul and begins to form a new government, there’s a last major pocket of resistance challenging its rule from a stronghold in northeastern Afghanistan.

Remnants of the Afghan defense forces have consolidated in the Panjshir province, under the banner of a new “National Resistance Front,” or NRF, led by Ahmad Massoud and backed by Amrullah Saleh, a former Afghan vice president who declared himself acting president of the country after President Ashraf Ghani fled.

“Our people will not allow aggressors to invade their province and allow them to subordinate us,” Massoud said in an interview with Foreign Policy this week. He left open the possibility of peace talks with the Taliban for a power-sharing deal, but it might already be too late for that. The Taliban has announced it is dispatching hundreds of fighters to Panjshir and first blood has already been shed; Massoud’s forces announced they killed eight Taliban fighters on Tuesday in what could have been an early Taliban reconnaissance mission to probe the NRF’s defenses.

Can the resistance hold out? Both the Taliban and NRF have asserted they are making important gains in these early skirmishes, but it’s hard to verify claims from either side at this point. Massoud, the son of a famed Northern Alliance commander by the same name who fought the Soviets and the Taliban, and his forces are essentially surrounded and cut off.

Massoud told Foreign Policy that so far he is “not receiving any assistance from any foreign country” despite his calls for international support.

So what are the likeliest scenarios? Afghanistan’s fate in a lot of ways hinges on what happens in Panjshir. Assuming peace talks are dead in the water, there are three broad possibilities:

First, if the Taliban can quickly snuff out the last pocket of resistance, its consolidation over the country will be complete.

Second, if the resistance front can hold out, it could form a beachhead for U.S. or Western strikes against the Taliban and other terrorist groups. This could prompt the United States and other major powers to begin quietly offering some support to Massoud, and give Western powers at least a slim foothold in Afghanistan for counter-terrorism operations. On the flip side, it could also lead to a drawn-out civil war that simply brings more violence to Afghanistan.

The third, and least likely option, is that the resistance in Panjshir actually starts to go on the offensive, gains momentum, and begins rolling back Taliban advances in other parts of the country.

But most analysts and several U.S. officials who spoke to SitRep dismiss this as unlikely given the Taliban’s strength, control of Kabul, and newly acquired arsenal of billions of dollars worth of U.S. weapons and military equipment the retreating Afghan defense forces left behind.

Will Biden back the NRF? The Biden administration hasn’t made any public signals on whether or how it will engage with the resistance front. Behind the scenes, U.S. officials tell SitRep it’s just too soon to tell. Washington is still reeling from its frantic evacuation operation. It is also feeling out whether the Taliban will make good on promises to form a more inclusive government that will respect the rights of its citizens and won’t provide safe harbor to terror groups, though most are skeptical of the Taliban’s claims.

Capitol Hill wants a say in the matter. As we’ve previously reported, Republican lawmakers are pushing President Joe Biden to start backing Massoud. Sen. Lindsey Graham and Rep. Michael Waltz called on Biden to recognize the opposition forces as the legitimate representatives of Afghanistan and back “our friends in the Panjshir Valley who will serve as a bulwark against regional terror.”

Ian McCary, the former deputy chief of mission at the U.S. embassy in Kabul, has been named the head of the new U.S. diplomatic office for Afghanistan, based in Doha, Qatar.

Jessica Chen Weiss has joined the State Department’s policy planning staff as a senior advisor focused on China. She’s on rotation in the role through a fellowship while on sabbatical from Cornell University.

Contingency plans. The British government is drafting plans to relocate its nuclear submarine bases to the United States or France if Scotland declares independence from the United Kingdom, the Financial Times reported.

The Scottish National party has campaigned on a vow to ban nuclear weapons if the country becomes independent; Scotland is seeking a rerun of the 2014 independence referendum that was narrowly defeated, though London has so far blocked those efforts. The British military could also seek out a long-term lease at their current bases in Scotland or move somewhere else on the British Isles, such as to the Royal Navy’s Devonport base.

New CENTCOM-er. U.S. Central Command (CENTCOM), the U.S. military’s geographic combatant command that oversees operations in the Middle East and Afghanistan, has officially taken over responsibility for Israel from U.S. European Command (EUCOM). The switch was originally announced by the Trump administration during the lame-duck period, and the Biden administration has decided to honor the move.

The two militaries celebrated the move by conducting joint naval patrols in the Red Sea. EUCOM originally handled relations with Israel so CENTCOM wouldn’t have to juggle historical acrimony between Israel and other Arab partners in the region.

Pain in Ukraine. Ukrainian President Volodymyr Zelensky was hoping for a warm welcome from the Biden administration after getting awkwardly dragged into former President Donald Trump’s first impeachment scandal. That’s not quite what happened, with Biden deciding to waive sanctions on the Nord Stream 2 pipeline designed to circumvent Ukraine’s centrality as an energy corridor into Europe.

Our colleague Amy Mackinnon previewed Zelensky’s Wednesday visit to the Oval Office, his first meeting with Biden, which also came with $60 million in pledges of new U.S. military aid. 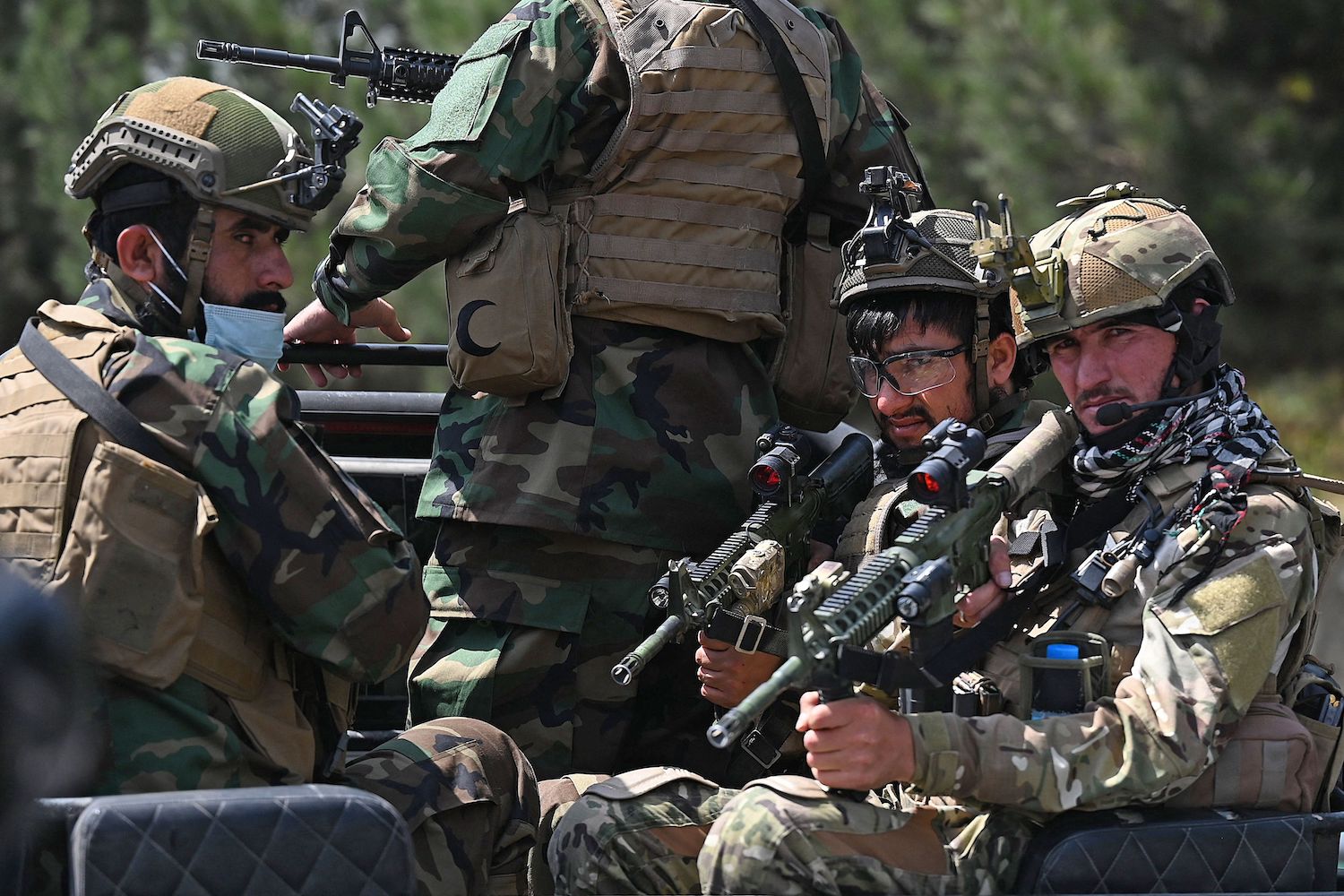 Taliban Fateh fighters, a special forces unit for the militant group, patrol along a street in Kabul with newly captured U.S. military equipment on Aug. 29.Aamir Qureshi/AFP via Getty Images

Interviews with the experts in the thick of national security news.

SitRep and a small group of reporters spoke to a senior State Department official on Wednesday who assessed the aftermath of the evacuation from Kabul. Here is some of what the official said, shedding light on the desperate and chaotic scenes in the final days of the evacuation, and how many Afghan allies the United States left behind.

On Afghans at the Kabul airport trying to get evacuated: “I would say everybody who lived it is haunted by the choices we had to make and by the people we were not able to help to depart in this first phase of the operation.”

On how many Afghan special immigration visa, or SIV, applicants were left behind: “I don’t have an estimate for you on the number of SIVs and family members who are still there, but I would say it’s the majority of them, just based on anecdotal information about the populations we were able to support.”

On the challenges of processing Afghans during the evacuation: “Every day was a constant improvisational effort to figure out what was going to work that day. As we got deeper into that process, we unfortunately had to start prioritizing the people to whom we had a legal obligation first and foremost, and that was our fellow American citizens.”

Sept. 2: Deputy National Security Advisor for Cyber and Emerging Technology Anne Neuberger is set to join the White House press briefing today to alert the public about ransomware scams over the holiday weekend.

TBD: Defense Secretary Lloyd Austin is set to travel to the Gulf next week to thank U.S. partners who are assisting in relocating Afghan refugees, he announced at a press briefing on Wednesday.

—Chairman of the Joint Chiefs of Staff Gen. Mark Milley reflects on 20 years of U.S. war in Afghanistan at a Pentagon press briefing on Sept. 1.

No bull. Like boats? Like bulls? Then the U.S. Navy has a treat in store for you. It is converting the Texas-based Essex-class aircraft carrier USS Lexington into a professional bull riding ring for the second year in a row, starting on Sept. 4.

Rethink that vacation in Pyongyang. Thinking of booking a trip to North Korea? Think again. The State Department has extended a restriction for American passport holders to travel to the Hermit Kingdom. The ban was first imposed by the Trump administration after American student Otto Warmbier died in 2017 after being released from North Korean custody.

You are commenting as . Change your username | Log out
Tags: Afghanistan, Middle East and North Africa, Security

NEW FOR SUBSCRIBERS: Want to read more on this topic or region? Click + to receive email alerts when new stories are published on Security, Middle East and North Africa, Afghanistan