Fake news about the U.S. withdrawal and life under the new regime is surging. Some of it could be part of organized propaganda campaigns.

The highlights this week: Misinformation surges in Afghanistan after the Taliban takeover, India’s external affairs minister offers an emphatic endorsement of the Quadrilateral Security Dialogue, and Bangladesh seeks to become the first South Asian state to join the world’s largest trade bloc.

The highlights this week: Misinformation surges in Afghanistan after the Taliban takeover, India’s external affairs minister offers an emphatic endorsement of the Quadrilateral Security Dialogue, and Bangladesh seeks to become the first South Asian state to join the world’s largest trade bloc.

An avalanche of misinformation has followed the Taliban takeover of Afghanistan. Some of it is sloppiness: people sharing information and not knowing it’s wrong. But intentional efforts appear to be at play, seeking to shape the images of the Taliban, the resistance, U.S. officials, and ethe Pakistani military. The identities and motivations of those sharing this misinformation are often not clear, but they could be part of organized propaganda campaigns.

Misinformation about Afghanistan has been posted in many languages, including Urdu, Hindi, English, and Korean. The Poynter Institute, the Associated Press, and Agence France-Presse have compiled many examples, including a Twitter thread from AFP fact-checker Uzair Rizvi.

U.S. actions in Afghanistan have so far been a frequent target of misinformation. Some social media posts include photoshopped images of Afghan evacuees bearing heavy weaponry, suggesting Washington has helped terrorists leave Afghanistan; these were posted by Russian media outlets. Others falsely accuse U.S. President Joe Biden of gifting $80 billion in arms to the Taliban and abandoning U.S. military dogs.

Additionally, much of the misinformation spreading in Afghanistan relates to Taliban brutalities and is easily debunked. An image of the Taliban purportedly auctioning off women actually depicts a protest against the Islamic State in London in 2016, and a photo of a man leading women in chains is digitally edited from an image taken in Iraq in 2003, for example. Other posts mention a nonexistent Al Jazeera investigation on women abducted by the Taliban and their nonexistent plans to execute Christian missionaries.

The battles between the Taliban and resistance fighters in Panjshir—the only province not seized by the group last month—have become a bonanza for fake news. The lack of credible on-the-ground reporting in the province has led to an information shortage that could be easily exploited. Photos of supposed Taliban fighters in Panjshir actually depicted French soldiers. Several Indian TV channels broadcast video purporting to show Pakistani aircraft attacking Panjshir. (In reality, the video was depicting American jets flying in Wales.)

What explains this surge in misinformation? The sudden attention rush of a major news story, the power of social media, and information shortages all play a role. Moreover, actors with axes to grind use misinformation as ammunition. Fake news about Biden’s policies in Afghanistan has been propagated by his rivals, from the U.S. Republican Party to Russian state media. Nationalist Indian outlets seek to paint Pakistan as an aggressor.

The information vacuum is critical. In recent years, Afghan and U.S. officials stopped providing information about military casualties and the amount of territory under Taliban control. As the security situation worsened in the last few years, media coverage outside of Kabul became more difficult. It’s now hard to know what’s happening in far-flung areas. In Panjshir, for example, the lack of on-the-ground reporting results in competing narratives, fueling rumors and propaganda wars.

The spread of misinformation in Afghanistan has troubling implications. For one, fake stories about the Taliban could change the group’s image among those outside of Afghanistan. While its brutality is apparent from its actions in Kabul, where citizen journalists recently filmed the Taliban beating female protesters, it’s harder to see this elsewhere. Without independent reporting, accounts of beatings, arrests, and intimidation outside the capital can’t be confirmed—giving the group space to project itself as softer and more moderate.

Furthermore, with so much fake news, true accounts run the risk of being dismissed as false. Social media posts have already suggested the images of U.S. aircraft taking off with Afghans clinging on that began circulating on Aug. 16 are fake. And with foreign bureaus evacuating their Afghan employees and local journalists facing Taliban threats, information shortages are only likely to worsen.

Unfortunately, the spread of misinformation all works to the Taliban’s advantage. It could prompt the militants to ramp up repressive activities in areas with little media presence, knowing that many of them will go unreported or unconfirmed.

India’s foreign minister seeks to bolster the Quad. Indian External Affairs Minister S. Jaishankar gave a policy address to the Australian National University that hit on common themes: the importance of multilateralism and the need to chart out a new global order. But the speech stood out for its emphatic endorsement of the Quadrilateral Security Dialogue, or the Quad. The grouping of the United States, Australia, India, and Japan has gained new momentum because of each member’s deep tensions with China.

The timing of the speech was also notable, taking place soon after the U.S. withdrawal from Afghanistan. Biden in part justified the decision by arguing that he wanted to spend more time addressing the China challenge. Washington regards the Quad as a key tool to counterbalance Beijing’s power in Asia.

Colombo declared a state of emergency this week, ordering the Army to oversee new rations on essential goods. Experts attribute the crisis to decreased agricultural production resulting from a fertilizer ban and to the pandemic’s devastating impact on Sri Lanka’s tourism industry, which makes up more than 10 percent of GDP. The sector received another blow this week when the U.S. Centers for Disease Control and Prevention issued a new advisory urging against travel to Sri Lanka.

Army reshuffle in Pakistan. On Tuesday, the Pakistani Army announced a major reshuffle, reassigning four three-star generals to new posts. Of particular note: Lt. Gen. Azhar Abbas, who was the corps commander in Rawalpindi, overseeing security on the border with India, will become chief of the general staff, an influential position that oversees both the operational and intelligence branches of the Army.

The reshuffle is significant not only because the Army is Pakistan’s most important political player but also because it comes just over a year before the end of Army Chief Qamar Javed Bajwa’s term. These shifts could eventually influence considerations about Bajwa’s successor. 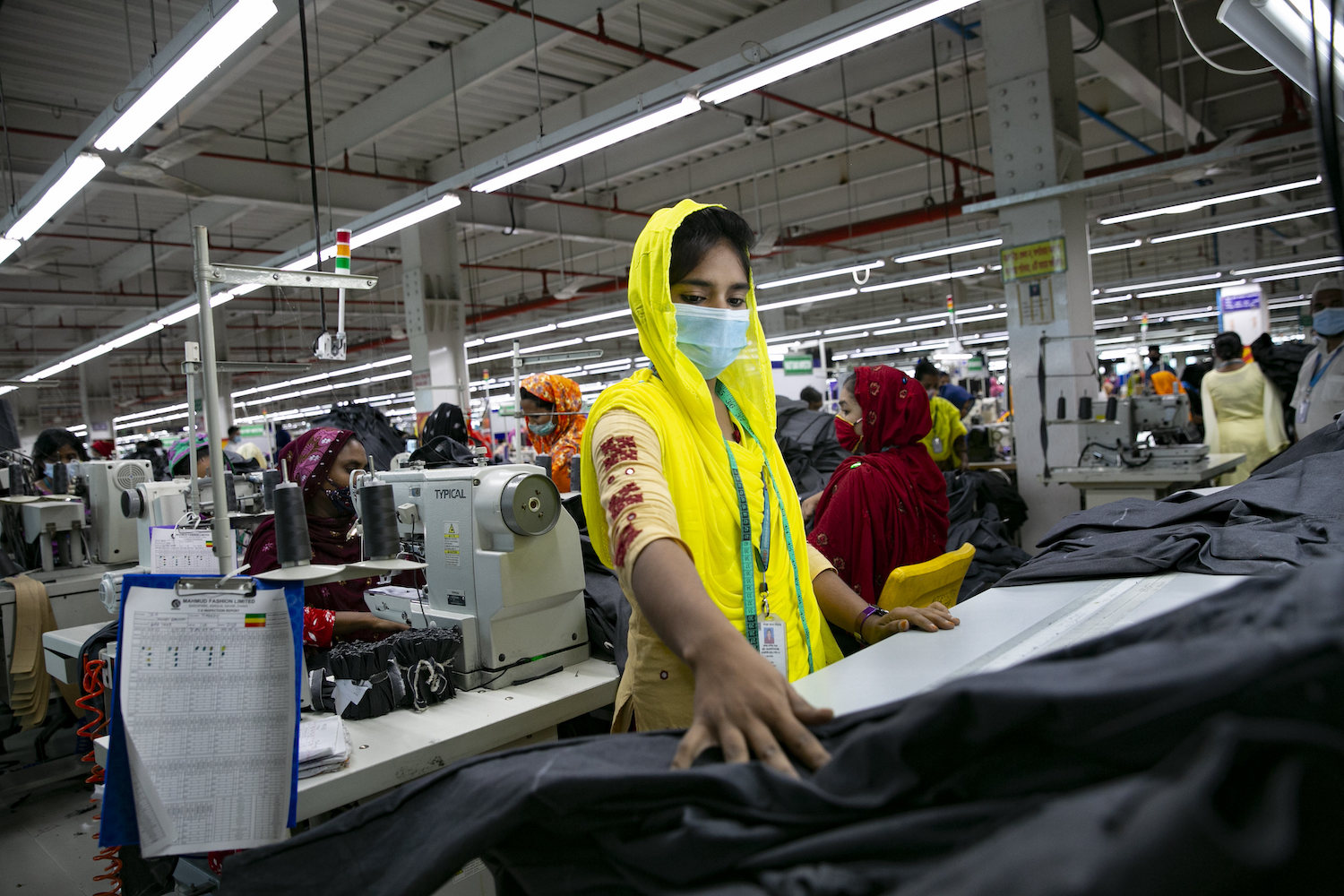 A garment worker is seen inside a factory in Dhaka, Bangladesh, on July 5.Allison Joyce/Getty Images

Bangladesh has decided to seek membership in the Regional Comprehensive Economic Partnership (RCEP), a 15-member trade bloc encompassing more than 2 billion people and nearly $30 trillion in combined GDP that is expected to formally launch in early 2022. Bangladesh would be the first South Asian country to join the group, which is currently comprised largely of East Asian states.

According to the Business Standard, Dhaka wants to maintain access to duty-free trade facilities in major economies—a perk it will lose once it graduates from least developed country status to developing country in 2026, as expected. Bangladeshi officials also hope that joining the RCEP would ensure Bangladesh’s powerful textile industry remains strong amid increasing competition from China, Japan, and Vietnam—all RCEP members.

Bangladesh’s membership in the RCEP would deliver a blow to India. New Delhi opted not to join, and now Dhaka—a key target of Chinese investment—is looking to become part of a Beijing-led bloc.

In Pakistan’s Dawn newspaper, the attorney and writer Rafia Zakaria argues that the U.S. counterterrorism wars are over, and that the coronavirus pandemic may have hastened their end. “An America suddenly crippled by COVID-19 had even less to devote to an amorphous war on terror, whose objectives seemed, at least in relation to the present, opaque and confused,” she writes.

Mahendra Dev, the director and vice chancellor of the Indira Gandhi Institute of Development Research, lays out a vision for better Indian food security policies in the Indian Express. “The narrative of Indian agriculture has to be changed towards more diversified high-value production, better remunerative prices and farm incomes,” he argues.

In the Daily Star, Mostafiz Uddin, an executive in Bangladesh’s apparel industry, writes about how ready-made garment (RMG) manufacturing can better embrace renewable energy. “For our RMG industry, which aims to lead the world in sustainability and use of renewable energy, the rewards will be plentiful and long-lasting,” he writes.

You are commenting as . Change your username | Log out
Tags: Afghanistan, South Asia, Taliban